Medication errors are frequent in emergency departments (EDs) [1, 2]. Clinical pharmacy has been operational in the ED of a number of countries for decades [3], and it is assumed that approximately 10% of the EDs in the US are staffed with clinical pharmacists [4]. The presence of pharmacists reduces medication errors [5-7], improves the medication history taken on admission [6, 8], is well perceived by clinicians [9, 10] and may be cost-effective [11, 12]. However, not all medication errors will be detected through pharmacist review [13]. Only a minority of the discovered medication issues are harmful for the patient [14] and a Danish study of acute admissions of elderly patients showed no effect on in-hospital length of stay, readmission or mortality [15].

In Denmark, which has no specialty in emergency medicine, the EDs are organized with a range of physicians from various specialties. In 2010, a survey revealed that among 25 department receiving acute patients, 11 (44%) had implemented clinical pharmacy services [16]. A recent study showed that clinical pharmacists identified medication issues in 25% of all admissions to a Danish ED. Among these issues, 47% were considered to be serious [17].

However, the pharmacists’ recommendations are of little value if they are not acknowledged or followed by the physicians. Many factors may influence this. Such factors include the physician’s opinion on the importance of the issue, his or her specialty, the category of recommendations, the patient’s age and the number of drugs. A study from Denmark of acute admissions showed that approximately 34% of the pharmacist reviews resulted in recommendation for changes in medication which were, in turn, taken into account by the physicians in 25-100% of cases depending on the category of recommendations [18]. However, only medical admissions were included and the situation might be different in an ED where patients with surgical, orthopaedic or medical problems are admitted.

The aim of the present study was to analyse how often and which kinds of categories of pharmacist recommendations were taken into consideration by the physicians in ED patients admitted for medical, surgical or orthopaedic problems. Special attention was paid to medication problems of significant or vital importance.

The general methodology has been described elsewhere [17]. The study took place at the ED at Kolding Hospital in Denmark. The ED receives around 9,000 patients annually for admission with general surgical, vascular surgical, medical, cardiological or orthopaedic conditions. Patients have an average stay of 23 hours and a discharge rate to home of approximately 65%.

The study period ran from August 2008 to March 2009. On working days, clinical pharmacists reviewed the files of the patients who had been admitted within the past 24 hours.

Every morning on working days, one of the pharmacists revised as many new patient files as possible within three hours. Only the files of patients for whom a treatment plan had been prepared by a physician were included.

Pharmacist recommendations were based on access to all parts of the patient file, including patient history, clinical examinations and laboratory results.

If the pharmacist recommended a medical intervention, a note was made in the patient’s file describing the issue and a solution. The medication issues were grouped as lack of medication reconciliation, indication for treatment which did not lead to a prescription, incorrect dosage or dosing frequency, inappropriate medication, significant interactions with other drugs, prescription errors and prescription without any indication. Generic substitution was not included. The note was made available to the physicians ¬instantly through the electronic patient file. If a potentially vital situation was identified, the pharmacists immediately reported this to the physician responsible for the patient. When a recommendation had been written, the file was reviewed by the pharmacists the following working days until the patient was discharged. If a pharmacist notice had been taken into consideration by a physician, either by a physician’s note in the file or a change in the medication list, this was registered as a positive reaction to the pharmacist’s recommendation, even if the physician did not accept the recommendation.

After the end of the study period, a specialist in internal medicine and a specialist in clinical pharmacology and geriatrics reviewed the recommendations. For each patient, the auditing physicians used a four-level severity categorization and assessed whether the medication issue was of minimal importance (e.g. incomplete information), moderate importance (e.g. too low dosage for the patient’s condition), significant importance with a risk of increased examination or treatment intensity (e.g. too low dosage of a drug in a patient with acute distress) or vital importance with a risk of permanent damage or death (e.g. a potentially life-saving drug in too low dosage for the condition treated). For the final score, the highest rating from either of the two physicians was used.

All variables were registered on pre-printed forms, entered into a database and analysed in STATA 12.0. All continuous data were reported as medians and interquartile ranges and all categorical data in absolute numbers and percentages of occurrence. In the analysis, the issues of minimal or moderate importance and significant or vital importance were dichotomized into: minimal/moderate and significant/vital importance, respectively. Kappa statistics were used for interobserver agreement analysis. Specialties were dichotomised into medical (including cardiological patients) and surgical (including general surgical, orthopaedic and vascular patients). Uni- and multivariate logistic regression was performed to evaluate the relationship between the reaction to the pharmacist’s recommendations and various influencing variables, expressed as odds ratios and 95% confidence interval. Stepwise backward elimination with p > 0.3 as the elimination threshold was used in the multivariate analysis.

The study was based on existing data in the patient hospital records and involved no patient contact. Thus, no ethical approval was required. The study was registered at the Danish Data Protection Agency (J. no.: 2010-41-4258).

A total of 324 patients were included in the study. If a pharmacist had noticed more than one problem for a patient, only the problem that received the highest rating was studied further. The identified primary issue was of significant/vital importance in 47% of the cases (65% agreement, Kappa 0.25, e.g. fair agreement) according to the two independent specialists’ evaluation.

In Table 2 the medication issues which were considered to be of significant or vital importance are further analysed. The physicians caring for medical cases responded significantly more frequently to these problems than surgeons did (78% versus 57%, p: 0.009), and a reaction was more frequent for issues concerning elderly patients. This difference remained significant in the multivariate analysis

We found that pharmacist recommendations were taken into consideration in 59% of the cases in an ED setting, and more frequently so if the patients were admitted for a medical rather than for a surgical reason (69% versus 51%), or if there was a lack of prescription despite a clear indication. For the findings of significant or vital importance, the physicians reacted in 67% of the cases and physicians were more likely to react if the patient had a medical than if the patient had a surgical problem (78% versus 57%). Neither the age of the patient, nor the number of drugs or the number of recommendations had any impact on the physicians’ reaction to a pharmacist’s recommendations.

Our findings suggest that pharmacist advice is generally acknowledged. It is remarkable, however, that in situations identifying potentially serious problems, the recommendations were only considered in two thirds of the cases.

The physicians’ response rate in this study was similar to that observed in another Danish study where rates ranged from 25% to 92% depending on the category of recommendations. However, analysis for variables such as seriousness of recommendations was not included [18]. ED acceptance rates ranged from 89% to 93 % in a review from 2009 [3].The 67% response rate in serious problems might be caused simply by the fact that the physicians did not read the pharmacist recommendation or that the patients were admitted only for a mean duration of 23 hours, which was not sufficient time to correct all medication errors. It may also reflect that the physician disagreed with the recommendation. It is still the physician who should weigh the benefits against the drawbacks of a change in the medication and might include information or experience which was not available to the pharmacist. Since the physicians were under no obligation to document if the pharmacist’s recommendation had been read, this question cannot be answered from this study.

We recorded a marked difference between medical and surgical responses to the pharmacist’s recommendation. Several explanations for this finding are possible. Prescribing medicine is an increasingly complex skill due to the multitude of drugs a physician should be acquainted with. This may challenge especially physician caring for surgical patients, where medication issues are only a minor part of their daily activities, while internists frequently find medication issues to be part of the reason for the acute admissions. Surgeons primarily try to rule out or confirm surgical diagnoses; some surgical procedures need to be performed on fasting patients, and post-operative regimes often include temporary medicine discontinuation. All this might cause the surgeons to pay less attention to medication issues. This study does not answer to which degree these factors influenced the response to medication issues in surgical patients.

As medication errors is a problem in EDs and higher acceptance rates of pharmacist recommendation can be achieved [3], our study indicates that special attention may be targeted especially at surgical patients. Another way to improve the use of pharmacist recommendations may be to make the notices more visible in the patient file and classify the identified problem into degrees of severity. However, this requires that physicians and pharmacist agree about what is considered to be a serious medication issue.

This study is limited by several factors. The same pharmacists wrote the recommendation and made the follow-up to evaluate whether the advice had been acknowledged or not. It could be argued that this was not an independent assessment of the physicians’ acceptance of the recommendation. Furthermore, the ED was newly established, and new working routines in an unfamiliar environment may have reduced the efficiency of the physicians’ work, leaving less time for assessment of pharmaceutical problems.

We chose the highest rating from any of the two independent physicians as the severity level of the medication issue. This was done because the independent specialists covered various important clinical fields and experiences. However, it could be argued that the rating should be based on expert consensus and that a pharmacist should have been included in the assessment since pharmacists may have different opinions on the severity of medication errors. We recommend future studies to address this question.

Despite these limitations, we believe that the results from our study have external validity for the implementation of clinical pharmacy in other EDs in similar settings.

In conclusion, we found that although pharmacists’ recommendations are followed in many cases in a Danish ED, there seems to be room for improvement especially among surgical patients. Since the evidence for acceptance rates of the clinical pharmacist’s recommendation in ED is very sparse, we recommend that further studies be performed to clarify this aspect. Such studies should include an analysis of the agreement between physicians and pharmacists concerning the severity of medication errors. 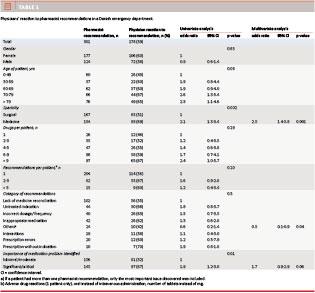 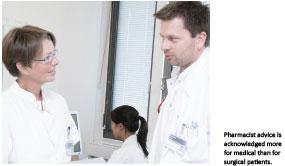 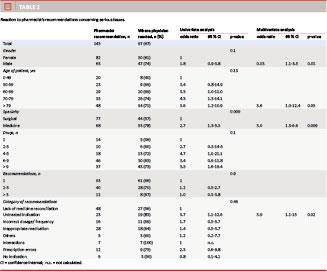