Admission time-dependent variation in mortality in a Danish emergency department

An important goal in emergency healthcare is to prevent adverse events and to postpone mortality. Organising staff in emergency departments (EDs) is complex. Patient inflow and severity are difficult to anticipate during working hours, and planning must rely on expected inflow as well as on the staff’s ability to prioritize the most acute patients by use of a triage system [1]. Furthermore, the accumulation of in-patients adds to the ED workload [2]. A recent large multicentre study found that surgeries with a high patient/nurse ratio were associated with increased mortality [3].

Previous studies have found that patients attending on weekends have a higher mortality than those attending on weekdays, both in EDs [4-6] and in other acute settings [7-9]. One study found an association between night versus day attendance and mortality in the ED setting [10].

The causal pathways are controversial; some suggest that the differences relate to a staffing or inflow disparity [11] or access to diagnostics [12], whereas others suggest that the findings may reflect clinical differences between patients attending on weekdays and weekends [9, 13, 14].

Weekend and after-hour differences in mortality in EDs are not always found [15-17]. A British study found no differences in patients attending during weekends compared with weekdays, and the study suggested that a possible explanation may lie in the implementation of an acute medical admission unit with consistent staffing levels and 24-hour access to diagnostics [15]. A large study on trauma patients found that after-hour differences in mortality were not present in hospitals that used a systematic trauma system [17].

Previous studies lack follow-up on mortality after hospital discharge as well as adjustment for disease severity in combination with patient characteristics such as co-morbidities. None of the previous studies were carried out in Scandinavian settings.

The purpose of this study was to examine if patients attending the ED after hours and in weekends had an increased mortality after adjusting for possible confounding factors.

This study was an observational cohort study performed at an ED in the Central Denmark Region. The hospital provides healthcare to approx. 300,000 people and has an annual ED census of 29,000 patients. The ED comprises an emergency admission and an emergency observation ward. The observation ward attends patients who require admission for an expected period of less than 24 hours. If longer medical care is needed, patients are transferred to specialised wards related to their illness. Patients are referred to ED from general physicians or arrive by ambulance or show up without referral. There are at least one attending emergency medicine specialist and two younger residents present in the ED to initiate treatment. These professionals are backed by physicians from other wards as needed. The ED is covered by physicians in shifts as follows (number of physicians in brackets): Attending: weekdays: 8-16 (1), 8-18 (1), 13-21 (1) and 18-09 (1). Weekends 8-18 (1) and 18-09 (1). Residents: weekdays: 8-17 (4), 10-22 (1), 17-09 (2). Weekends: 8-18 (2), 10-22 (1) and 17-09 (2).

Exceptions for adult medical patients are made for cardiology, gynaecology and obstetrical patients, who are attended in their own specialised ward. We retrieved data on all patients from the electronic patient journal (EPJ), the Danish National Patient Registry (DNPR) and the Danish Civil Registration System (CRS). We retrieved information on triage categories from the EPJ, which are derived from the RETTS-HEV, a triage system with five categories, previously described in detail [18, 19]. The DNPR provided information about patient arrival time as well as International Statistical Classification of Diseases and Related Health Problems 10 (ICD-10) codes for all hospital visits. Data on age, gender and date of death were derived from the CRS.

The inclusion criteria involved all patients (n = 5.385) attending the ED within the three-month period (from 1 September to 30 November 2012). Exclusion criteria were: all patients within the study period who had missing information on triage category or who were foreigners and thus had not been assigned a CPR number (n = 705).

Data on attendance time were recoded into shifts (night-shift = 00.00 H to 07.59 H, day-shift = 08.00 H to 15.59 H, and evening-shift = 16.00 H to 23.59 H) and into weekend/weekdays according to date. National holidays were coded as weekend. Furthermore, we created combined groups to examine the interaction between shift and weekend/weekday. We analysed these strata separately.

We defined mortality at four different time points; in-hospital mortality (including transfer to other departments) and 30-, 60- and 90-day mortality based on the date of death, attendance date and discharge date. We also defined mortality as a time-to-event outcome along with a time from attendance to death with censoring at 90 days.

We described the population characteristics with proportions for patients according to their time of attendance. Multinomial logistic regression was performed to analyse the associations between attendance time and the outcomes; in-hospital mortality and 30-, 60- and 90-day mortality and Cox regression were used to analyse the association between attendance time and the time to death. Proportional hazard was examined using log-minus-log plots. The stratified analysis was performed only on the outcome 30-day mortality. We expected gender, age, triage category, diagnosis and co-morbidity to be possible confounders. The patients were representing 363 different diagnoses. For the outcomes 30-, 60- and 90-day mortality, we used a mixed model analysis [20] to correct for clusters within each ICD-10 diagnosis (variance of the intercepts) for the actual ED visit. Due to the limited number of events, a mixed model could not be used for the outcome in-hospital mortality and for the stratified analysis.

The study population is described in general in Table 1, and according to time of week and shift in Table 2.

Triage categories were unevenly distributed over both time of day and weekdays/weekends, showing fewer severe patients arriving during weekdays and on dayshifts. The distribution of patients with co-morbidity was similar for both hours and days of the week. Younger patients were more often attending during weekends, evenings or nightshift than were older patients.

In this study of 4,680 patients from a Danish emergency department, we found indications of an association between patients attending the ED during the evening shift and weekends and increased mortality. The associations between evening shift combined with weekdays and dayshift combined with weekend were significant. The associations were strongest with in-hospital mortality and decreased over time.

We had access to a range of register-based information and could determine the outcome mortality with high precision. However, we did not have access to data about the cause of death, which could potentially have provided indications about the causal relationship. The possibility of adjusting for both disease severity and diagnosis for the actual visit and prevalent co-morbidity was an important strength of this study. However, adjusting for triage categories has some limitations as only the initial triage category was used and triage is a dynamic variable by nature. Adjustment for possible confounders increased the associations, which is in line with the findings of Handel et al [4]

The sample size of the study was not sufficient to meet the significance level of p < 0.05 in most of the strata. However, the results were consistent, and the estimated size of the risk was of clinical importance. We were able to examine inflow, but not crowding as information regarding the time at which the patient left the ED was inaccurate and other specialties may have taken over the patient while the patient was still physically situated in the ED.

Excluding patients not registered with a triage category may introduce selection bias in the study. Selection bias could also be present if patients who suffered from a milder illness postponed their contact to the healthcare services until after the weekend or the following morning. If these patients have a higher mortality due to delayed attendance, this could have decreased the associations found. The distribution on triage categories vary both with day of the week and with shifts. Even though we adjusted for triage category, diagnosis and co-morbidity, there may still be unobserved differences between the patients.

The findings of excess mortality on weekends compared with weekdays and evening shifts compared with dayshifts were in line with previous findings in EDs [4-6, 10]. An explanation for the findings is difficult to establish on the basis of the available information. Contributory explanations may include a reduction in the staffing, increased busyness on the evening shift and during weekends in the ED, differences in pre-hospital organisation along with differences in the possibilities to refer patients to other medical specialties during weekends. The differences in types of patients attending during the different shifts and during the week are often suggested as a possible explanation [13, 15]. However, since we adjusted for both diagnosis and severity (triage category), we consider that any residual confounding related to patient characteristics will be limited. All estimates increased after adjustment for possible confounding factors. However, when analysing each potential confounder separately, increasing estimates were associated with adjustment for age and co-morbidity, whereas adjustment for triage categories decreased the associations. This finding may be related to increased risk for vulnerable and older patients with more co-morbidities. The stratified analysis identified two possible high-risk periods; the evening shift on weekdays and the dayshift during weekends. These periods correspond to periods with reduced staffing, but also with reduced inflow. We were able only to adjust for diagnosis in the analysis of 30-, 60- and 90-day mortality and did so by using of a mixed model, taking clusters within diagnostic groups into account. This model slightly increased the estimates; and the likelihood ratio test, which included diagnoses, improved the models compared with traditional logistic regression (p = 0.0011, p = 0.0001 and p = 0.002, respectively). We were unable to adjust for diagnoses in the stratified analysis.

Seward et al performed a review of 200 patients who died within seven days of admission and found that attendance delays, inaccurate diagnoses and delays in patient evaluation and treatment were major problems [13]. In a previous study of inflow and waiting times in the same ED, delays for attendance during after-hours were found [18].

Our results should be interpreted with caution as a range of unmeasured circumstances may be related to this association. Such circumstances occur both before and after the attendance to the ED. Further studies providing possible explanations are warranted. If the general pattern from this study is true, where the adjusted model increased the size of the associations, then a crude analysis would most likely reveal similar findings in a simple study design without co-variates provided accurate data on mortality are available.

Indications of excess mortality were found for patients attending in the weekend compared with weekdays and in the evening hours compared with night and daytime hours, even after adjusting for possible confounders. The evening effect was primarily related to weekdays, whereas the weekend effect was related to the dayshift. The causal mechanism remains unknown, but may be related to unmeasured differences in patient characteristics, reduced staffing, lower seniority or reduced access to diagnostics and specialists. Further studies in larger samples are needed to confirm the findings. 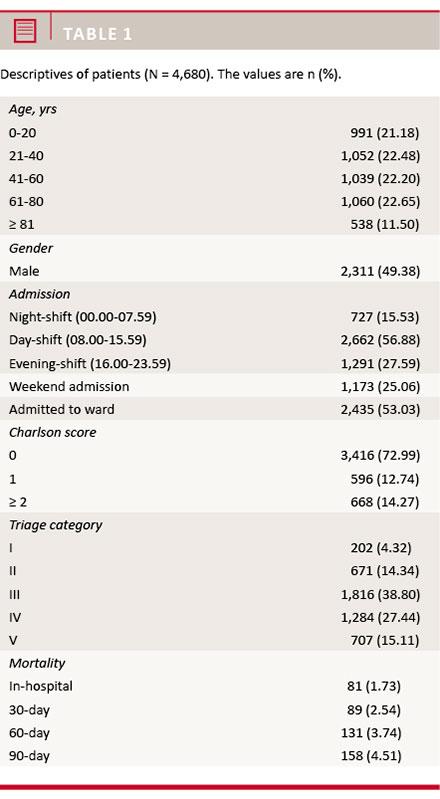 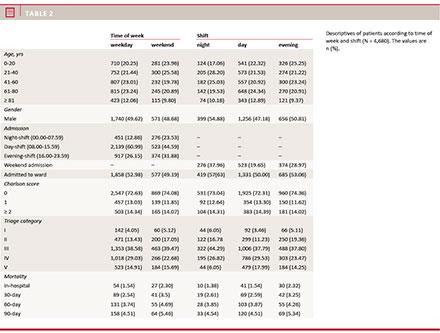 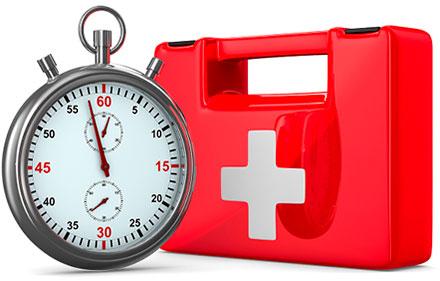 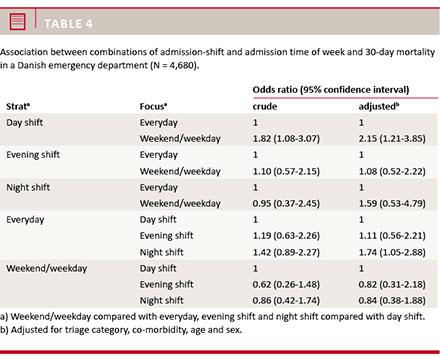