Laparoscopic procedures in abdominal surgery are reported to be safe and may result in improved outcomes in some areas. As an advanced development of laparoscopic surgery, robotic-assisted surgery is expected to have same advantages as conventional laparoscopy such as fewer post-operative wound complications, a lower risk of intraoperative bleeding, a shorter hospital stay and a reduced morbidity and mortality [1, 2]. Robotic-assisted surgery is associated with advantages such as three-dimensional presentation of the surgical field, an improved ergonomic position for the surgeon, advanced instruments with wrist-like function and elimination of physiological hand tremor. It is an ongoing discussion whether robotic assistance reduces the morbidity and mortality compared with traditional laparoscopy and whether the advantages may be outweighed by the higher costs related to the purchase of robots, the training of surgeons and possibly the longer duration of the operation compared with conventional laparoscopy [3-5].

We describe the initiation and safety issues related to the implementation of robotic surgery in a multidisciplinary centre for robotic surgery. Robotic-assisted surgery has been implemented as the standard procedure for the majority of cancer operations in urology, gynaecology and gastrointestinal surgery; and robotic-assisted surgery for benign conditions has also been initiated.

The Robotic Centre in Herlev Hospital is organised as a multidisciplinary entity where all four specialties cooperate. The centre has three surgical robots, and the daily capacity is approximately six robotic procedures. Organisationally, the centre is subject to the Department of Anaesthesiology and acts as an independent unit in the surgical ward with its own head nurse and especially robotically trained nurses that work within all surgical specialties.

Data regarding date, type of surgery, duration of procedure, conversion to open surgery and length of anaesthesia were collected in the surgical database at the hospital (ORBIT) from where all cases with the procedure code KZXX00 (use of robot) were included.

Data regarding re-operations and length of hospital stay were collected through the patient administrative system at the hospital, and information regarding body mass index, American Society of Anesthesiologists physical status classification (ASA) and type of anaesthesia were collected from the Danish Anaesthesia Database. Re-operations and mortality were assessed up to 30 days post-operatively. Results are shown as means with 95% confidence intervals unless otherwise stated. The duration of the surgical procedures was defined as time in minutes from skin incision to last suture including time for docking of the robot.

Trial registration: The study was approved by the Data Protection Agency (Record No.: 2007-58-0015). There was no requirement for ethical committee approval.

On 19 September 2008, the first robotic-assisted procedure in urology was performed, and in March 2009 and April 2010, respectively, the gynaecological and gastroenterological surgery departments also started performing robotic-assisted procedures. At present, there is an interdisciplinary robotic centre with three robots on which surgery is performed daily. On several occasions, surgeons from various specialties collaborate, and surgeons have cooperated in robotic-assisted pelvic exenteration for advanced or recurrent pelvic cancer.

The implementation strategy was to start with one specialty at a time, passing on knowledge and experience on safety and patient population from one specialty to the next. Surgically, the strategy was to initially employ robotic-assisted surgery for simple procedures or procedures for which international experience was available, and subsequently perform more complex procedures, progressively implementing robotic-assisted procedures as the standard procedure for almost all cancer operations.

A total of 2,473 procedures were performed in the period (see Table 1 for patient demographics).

Eleven procedures (1%) were converted to open surgery, two due to malfunctioning of the robotic system, nine due to surgical complications (i.e. bleeding) or difficulties (i.e. intra-abdominal adhesions). The percentage of re-operations was 0.2%, and the 30-day mortality was 0.1%.

From the initiation of robotic-assisted gynaecology procedures in 2009, we performed both simple and radical hysterectomies due to malignant and premalignant disorders, with or without removal of pelvic lymph nodes and omentectomy. In 2011, robotic gynaecologic surgery with hysterectomy on benign indications, myomectomy and sacrocolpopexy were initiated. By 2013, seven surgeons were performing robotic-assisted surgery in gynaecology, 574 procedures in total in the period. Simple hysterectomy without pelvic lymphadenectomy was the most frequently performed robotic procedure in gynaecology; 263 of these procedures were performed in total.

Ten procedures (4%) were converted to open surgery, five due to technical difficulties with the robot and five due to surgical complications (i.e. bleeding) or difficulties (i.e. intra-abdominal adhesions). The percentage of re-operations was 2.3%, and the 30-day mortality was 0%.

A total of 20 procedures (7%) were converted to open surgery, all of them due to surgical complications (i.e. bleeding) or difficulties (i.e. intra-abdominal adherences). The percentage of re-operations was 7.3%. The 30-day mortality was 1.1%.

Prior to implementation of robotic surgery, anaesthesiology staff attended courses with the operating staff. The anaesthesiology staff had experience with anaesthesia for laparoscopic procedures in gynaecology and surgical gastroenterology, where problems with steep Trendelenburg position and CO2 insufflation were known; but with the introduction of robotic surgery, these challenges needed handling during expectedly longer procedures. The challenges included assuring sufficient ventilation while maintaining an acceptable transpulmonary pressure and avoiding complications due to the positioning of the patient during a long operation [6]. In regards to choice of anaesthesia, the difficulty of accessing and controlling the patient’s intravenous line due to the positioning of the patient played a major role in the choice of gas anaesthesia as the most common form of anaesthesia for robotic operations within urology at this hospital. Due to a higher incidence of post-operative nausea and vomiting in women and in certain types of procedures (intestinal resections), intravenous anaesthesia was often used in gynaecological and gastroenterological procedures (see Table 2).

There are important factors that must be considered in connection with the implementation of robotic surgery. One often discussed factor is the learning curve. For urological procedures, it was shown that the transition from open prostate surgery to robotic-assisted surgery was associated with a steeper learning curve for the individual surgeon than the transition from open prostate surgery to laparoscopy. In a study by Ahlering et al [7], an experienced surgeon in open radical prostatectomy without prior experience with laparoscopic procedures performed robotic-assisted prostatectomy with operating time, blood loss and complications comparable to that of a skilled robotic surgeon after 8-12 cases. For comparison, the transition from open to laparoscopic procedures without a robotic interface is estimated to 80-100 cases for a skilled open surgeon. In a study by Park et al [8], a retrospective study is made on the laparoscopic and robotic learning curve of a single surgeon in low-anterior resection for rectal cancer. They found a comparable learning curve between the two modalities with a learning curve of 41 first cases in laparoscopy and 44 in robotic surgery. The surgeon had some laparoscopic training prior to data collection, but no robotic training. In that study, they also found significantly fewer post-operative complications in the robotically operated group. In a case control study by Lim et al [9], the learning curves of the first 122 robotic-assisted total hysterectomies were matched and compared with the first laparoscopic total hysterectomies by the same surgeon with no prior experience with either modality, but with laparoscopic training and procedures performed prior to the robotic procedures. In this study, they found a steeper learning curve for robotic-assisted procedures with 24 versus 49 procedures in laparoscopy, and they found fewer major post-operative complications in the robotic group, which is in line with the study by Park et al [8].

The implementation of robotic surgery was both performed on a structured basis focused on the individual surgeon and on an organisational level focused on the surgical specialty. Before implementation, all surgeons received training in a simulator and performed supervised procedures. Both training methods were recommended for use in training of specialised robotic surgeons [10, 11]. There was a longer operative time of the first procedures in each specialty, after which we recorded a slight decline in duration over time, probably due to the learning curve for the individual surgeon [12]. However, the decline in time was probably also related to the acquisition of the necessary routine by the entire surgical team. At the organisational level, robotic surgery was implemented in one surgical department at a time, starting with urological procedures, as this area was best described in the literature at that time. With this strategy, the anaesthesiologists gained experience and were more prepared for implementation of robotic surgery in the remaining specialties.

In the development of a multidisciplinary robotic centre that acts as an independent unit in the surgical ward, we found that the following characteristics were beneficial. The centre had its own head nurse and robotically trained nurses working within all surgical specialties, nurses gained knowledge about the robotic instruments and technicalities with the robot and became experts dedicated to every detail of this modality, easing any potential technical obstacles associated with robotic surgery. The nurses dedicated to the centre worked during daytime and did not do night-shifts, so continuity was ensured.

The weakness of the set-up is that non-robotically trained nurses can never fill in, since they rarely see robotic surgery.

Another important matter when considering the implementation of robotic-assisted surgery is the cost-effectiveness of this surgical approach. It has been shown in cardiac valve surgery by Mihaljevic et al [13] that cost effectiveness depends on the number of procedures performed annually because though the acquisition and maintenance of the robot is expensive, lower post-operative costs and an earlier return to work outweigh these costs, given that the robot is used for a certain number of procedures daily. These results are found in a setting with conversion from open to minimally invasive procedure. In a study by Wright et al [4], comparing costs and outcomes of abdominal, vaginal, laparoscopic and robotic hysterectomies through the study of 688 hysterectomies, the authors found that robotic-assisted procedures was the most expensive approach. Though abdominal hysterectomies have longer operating times and longer post-operative hospitalisation, robotic-assisted hysterectomies were more expensive in terms of the cost of operation and the total patient cost. In the present study, no analysis regarding the annual number of hysterectomies was made. In a study by Salman et al [5], analysing cost, complications and mortality in robotic versus non-robotic general surgery through a nationwide database including more than a million non-robotic (laparoscopic and open) and 37,000 robotic-assisted procedures, the authors found that the overall costs of robotic-assisted procedures was lower than those associated with non-robotic (both open and laparoscopic) procedures. Studying the individual modalities and procedures, they found that only robotic-assisted cholecystectomies and gastroesophageal procedures were more expensive than their laparoscopic counterpart.

We aimed to present the experiences with implementation of robotic-assisted surgery within various surgical specialties. The study has several limitations due to its retrospective design, including a lack of a control group and multiple possible confounders (selection bias, learning curve, etc.). We did not address the consequences of introducing robotic surgery on the education of future surgeons. This needs to be addressed in the future. Similarly, the optimal strategies for the implementation of teaching programmes for surgeons in training must be determined, and it must be ensured that they will be presented to this modality. There were several cases of conversion to laparoscopic or open procedure. This important aspect needs to be addressed systematically in the future.

The initiation of a multidisciplinary centre for robotic surgery was facilitated through stepwise introduction of robotic procedures across various specialties. During a five-year-period, a high-volume centre for robotic surgery has been developed in which all patients with malignant diagnoses are offered robotic-assisted surgery based on multidisciplinary cooperation. Robotic-assisted surgery for benign conditions needs to be investigated more thoroughly in the future. The results from ongoing large multicentre randomised clinical trials are awaited in order to make firm conclusions regarding the potential clinical advantages of robotic-assisted surgery. 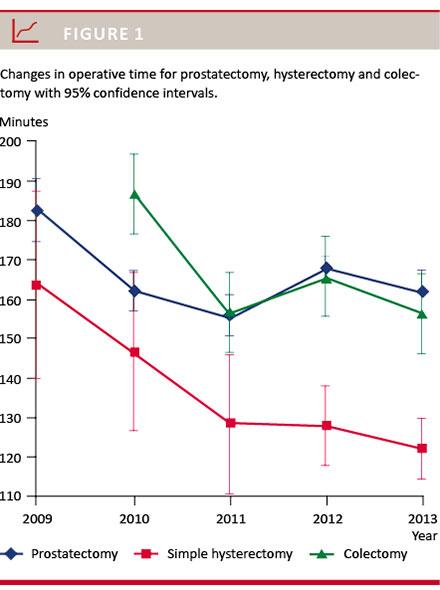 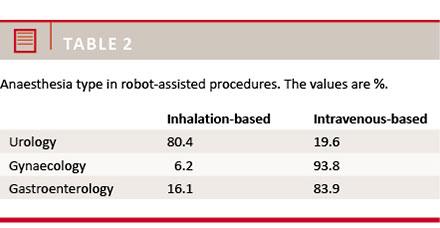 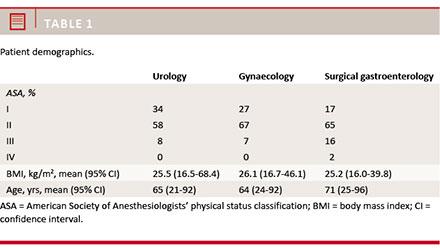