Chronic obstructive pulmonary disease (COPD) is a global health problem with a prevalence of approx. 60 m [1]. In Denmark, an estimated 400,000 people have COPD, which corresponds to 8% of the population [2]. Roughly 10% of all deaths have COPD as an attributed or a contributory cause [3]. Annually, COPD is responsible for 20,000 acute hospitalizations [4], and the total associated health expenditure is estimated at 530 m DKK per year [5] – a considerable burden on the publicly financed health-care system.

Non-invasive ventilation (NIV) is a relatively new treatment in which pressure ventilation is provided through a tight-fitting face mask. A Cochrane review found solid evidence that NIV reduces mortality, the need for intubation and the number of bed days in patients with a COPD exacerbation [6]. In Denmark, NIV was initially introduced in intensive care units about ten years ago and has slowly become more common in pulmonary departments. Today, NIV is recommended as an addition to medical treatment for patients acutely admitted with a COPD exacerbation and concurrent hypercapnic respiratory failure [7].

In 2008, the Danish health-care authorities launched the Danish Clinical Register of COPD (DrCOPD), among other initiatives, to monitor and increase the use of NIV.

In this paper, we describe the use of NIV in the five Danish administrative regions from 2008 through 2011 and the corresponding mortality proportions among patients with acute hospitalizations for COPD.

The study population included all patients ≥ 30 years of age with a first admission for acute COPD exacerbation to all Danish hospitals from 2008 through 2011. To focus on the prognosis of true first-time COPD hospitalizations and to avoid survivor bias, patients with a previous COPD admission in the 2002-2007-period were excluded. Only patients hospitalized for ≥ 1 day were included. The following International Classification of Diseases (ICD)-10 codes were used to identify the population in the Danish National Patient Register (DNPR): COPD (DJ44) as primary diagnosis, or respiratory failure (DJ96) or pneumonia (DJ13 - DJ18) as primary diagnosis in combination with COPD (DJ44) as a secondary diagnosis.

Data on age at admission, admitting hospital, sex and co-morbidities were obtained from the DNPR. Data collection was based on a search of the patients’ entire hospital contact history and associated diagnoses during the ten years prior to their COPD hospitalization. We categorized co-morbidities according to the Charlson Comorbidity Index which describes the number and severity of co-morbidities [8]. We did not include chronic bronchitis, emphysema and COPD (ICD10: DJ40-DJ44).

Information on treatment during hospitalization was obtained from the DrCOPD, which is integrated into the DNPR [9]. Treatment was categorized as standard medical treatment, NIV only, NIV in combination with invasive mechanical ventilation (ventilator), and ventilator alone. NIV and ventilator were identified using procedure codes BGDA1 and BGDA0, respectively, whereas standard medical treatment was recorded if these codes were absent [10].

Vital status was acquired from the Danish Civil Registration System. Since 1968, the registry has maintained electronic records of all citizens’ unique personal identification number, which is used in all national registers and hence enables unambiguous linkage of patient data. Vital status is updated on a daily basis [11].

We calculated the proportion of patients receiving the different treatments and the proportion of patients dying from any cause in-hospital, within 30 days, and within six months of admission. All analyses were performed at a national level and followed by analyses of subgroups at the regional level. Comparisons over time were made by computing the relative risk (RR) with 95% confidence intervals (CI) of the treatment modalities and of death, respectively, in 2011 relative to 2008. RRs were adjusted for age, sex and Charlson score using the Mantel-Haenszel method to remove potential confounding effects of these. We assessed the trend in treatment and mortality across the study period using a Spearman rang correlation test, with the null hypothesis that the distribution remained the same during the study years. An alpha level of < 0.05 rejected this hypothesis, and the Spearman correlation coefficient (r) was used to assess the direction of the trend. Data were analyzed using SAS 9.3.

Trial registration: The study was approved by the Danish Data Protection Agency (record no. 2012-41-0438), the Danish National Indicator Project, Danish Regions and the Danish Ministry of Health.

A total of 24,982 patients were admitted with a first-time COPD exacerbation from 2008 through 2011 (Table 1). Women comprised 55% of all patients in both 2008 and 2011. The median age at first admission was 74 years. The proportion of patients who were younger than 70 years of age increased by 3.1 percentage points (pp) during the study period. More than half the population had a Charlson score of ≥ 1; and the proportion of patients with a Charlson score of two decreased by 1.8 pp, while patients with a score of zero increased by 1.4 pp.

In adjusted analyses, a statistically significant increase in treatment with NIV of first-time COPD admissions from 5.8% to 7.0% was observed between 2008 and 2011 (RR: 1.21; 95% CI: 1.06-1.39) (Table 2). Confounding by changes in the distribution of age, sex and Charlson score during the study period had hardly any effect on risk estimates. The likelihood of receiving NIV during admission increased in all regions. The largest increase (2.4 pp) was observed for the Region of Northern Jutland from 5.1% of admissions in 2008 to 7.5% in 2011. The Region of Southern Denmark had the highest baseline value of 6.8%, which increased to 8.7% over the four-year study period. The Region of Zealand had the lowest baseline NIV use of 4.3%, which increased to only 5.3% – the lowest of all regions. At the national level, a statistically significant increase from 1.3% in 2008 to 1.8% in 2011 was observed in the use of NIV in combination with invasive ventilation. In relative terms, this corresponded to a 36% increase (RR: 1.36; 95% CI: 1.03-1.80). The largest increases in the use of NIV + ventilator was observed in the Region of Northern Jutland (RR: 3.58; 95% CI: 1.32-9.70) and in the Region of Zealand (RR: 2.06; 95% CI: 1.03-4.14). The proportion of patients receiving standard medical treatment decreased by 1.8 pp while the use of ventilation only remained unchanged during the study period. All statistically significant changes in treatment between 2008 and 2011 at both the national and the regional level were supported by statistically significant trends across all four observation years.

During the four years of follow-up, no substantial changes in national in-hospital, 30-day and six-month mortality could be observed (adjusted RRs varying 0.91-1.05) (Table 3). The proportion of patients treated with NIV who died during hospitalization, as well as within 30 days and six months remained stable from 2008 to 2011. Among patients treated with both NIV and ventilator, in-hospital mortality decreased substantially, but not statistically significantly, with 7.5 pp from 29.2% to 21.7% in 2011 (RR: 0.69; 95% CI: 0.41-1.16). Mortality varied slightly between regions, with especially the Region of Central Jutland and the Region of Zealand showing slightly higher mortality within the first 30 days (Figure 1). In trend tests taking 2009 and 2010 into account, these increases were not statistically significant.

In this study, we found a statistically significant increase in the use of NIV in all Danish regions in the 2008-2011- period. NIV was used in 8.8% of all first-time COPD admissions in 2011. This figure is slightly lower than the recommended quality standard of 10% NIV for all COPD hospitalizations. However, this standard includes many repetitive episodes in severely affected COPD patients [7]. Variation between regions remained with only the Region of Southern Denmark meeting the 10% standard for all episodes with NIV being used in 10.3% of the patients. The observed increase in the use of NIV was expected following the initiation of DrCOPD, which emphasized the importance of NIV. We have also recently shown that DrCOPD increased the measurement and registration of several clinical parameters in COPD out-patients [12]. Reporting of NIV to the DNPR is associated with a substantial financial reimbursement from the state [13]. This incentive has not increased over time. Thus, although we cannot exclude the possibility of false registrations, we expect the increase in NIV as assessed in the DrCOPD to reflect a true increase in use of this modality rather than solely increased registration. Similarly, the procedure code for invasive ventilation triggers an even larger reimbursement to the hospital and is thus unlikely to be underreported. However, there is no further economic incentive in registering a NIV code in addition to a code for ventilator and the NIV + ventilator treatment is thus likely to be underreported.

During follow-up, we found mortality after first-time hospitalization for COPD to remain stable. Still, our results are encouraging as a recently published Danish national register-based study covering the six-year period 2002-2008 found that age- and sex-adjusted all-cause in-hospital and one-year mortalities among patients with a first-time COPD hospitalization had increased [14]. The authors explained this by the gradual change in hospitalization threshold, which resulted in more severely ill patients being admitted [13].

It is well-documented that NIV reduces mortality in patients with moderate COPD exacerbation [6], and NIV is recommended for patients who are too ill for standard medical treatment, but who do not require invasive ventilation. Hence, we can speculate that the gradual implementation of NIV is contributing to the observed slight decrease in in-hospital mortality during the study period. In line with the practice where NIV can be used for weaning of patients from a ventilator, we found that in-hospital mortality decreased particularly in patients treated with a combination of NIV and ventilator.

In the Region of Zealand, mortality increased from 2008 through 2011, and in that region 30-day- and six-month mortality were seemingly higher than in the other regions. This finding was puzzling and could be due to the regression to the mean phenomenon, as baseline 30-day mortality was low in this region in 2008 and fluctuated quite a lot during the study period. Alternatively, the increase could be a consequence of the past decade’s centralization of health-care infrastructure into fewer and larger units which results in longer travel distances when hospitalization is needed. With concurrent improvements in management in primary care reducing the number of exacerbations [15, 16], this could have increased the exacerbation severity upon admission and could ultimately cause a poorer prognosis [14]. While the other regions may have adapted to such changes, acclimatization may still be in progress in the Region of Zealand.

We found that the number of first-time COPD hospitalizations in Denmark decreased during the 2008-2011 period. This trend is a continuation of the trend already seen in 2002-2008 [14]. After three decades of declining smoking prevalence in Denmark, the decrease in the number of COPD hospitalizations may be due to a decreasing incidence of severe COPD. While Lykkegaard et al found an increasing co-morbidity in terms of the Charlson Index, we found a decreasing trend in the number and severity of co-morbidities [14].

We performed the primary analyses at the national level, while secondary analyses were performed at a regional level. Although the same exposures and outcomes were studied in both analyses, the populations differ and our findings are therefore unlikely to be caused by mass significance due to multiple comparisons.

The strengths of our study include the prospective nationwide population-based design resulting in inclusion of all Danes admitted with a first-time COPD exacerbation in the study period. Further, thorough efforts are made to ensure data validity in the DrCOPD. Regular audits are conducted, including assessment of the validity and completeness of patient registration against hospital discharge registries and medical records. Generally, audits of out-patients and hospitalized patients have shown a high validity and reasonable completeness of COPD diagnoses coded in the DNPR [9]. Restricting analyses to first-time admissions limits confounding by previous severe exacerbations – which are well documented risk factors for mortality. Unfortunately, we were unable to adjust for the severity of the exacerbation, since we lacked information on the clinical and paraclinical variables recorded during admission. Nor did we have data on disease severity in the stable phase. It is our aim to include such covariates in future analyses.

In conclusion, the use of NIV in Denmark has increased after the launch of a national COPD quality programme in 2008. However, regional variation in the use of NIV remains and no substantial improvements in mortality have been observed. Continued efforts are warranted to ensure implementation of appropriate NIV. 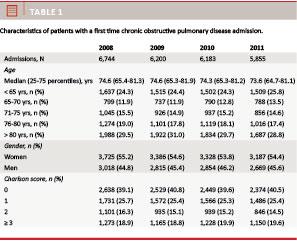 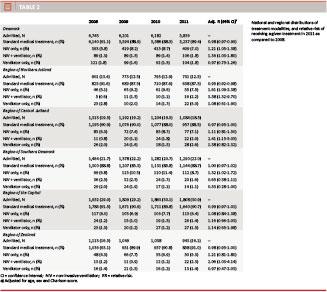 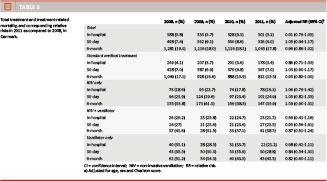 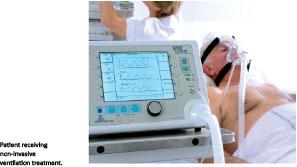 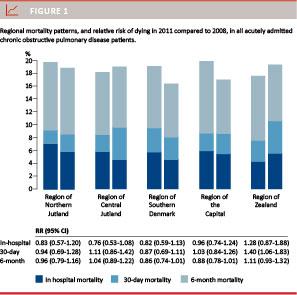