Boneloc (methylmethacrylate/decylmethacrylate/isobornylmethacrylate) bone cement was developed to decrease polymerisation heat and leakage of toxic methyl methacrylate monomer to the adjacent bone while preserving its mechanical properties [1]. Furthermore, the unique closed mixing- and delivery system prevented release of possible toxic vapours to the operation theatre, which was an important reason motivating the introduction of Boneloc into many Danish orthopaedic departments. However, within a few years, alarming aseptic loosening rates were reported which were probably caused by a significantly reduced tensile strength and Young’s modulus compared with contemporary cement brands [2, 3]. Only the Exeter stem (collarless, double tapered and highly polished) has shown acceptable short- to mid-term aseptic loosening rates [4], although results were inferior to those observed for the same stem fixated with high viscosity cement [5]. In Scandinavia, Boneloc was declared a surgical catastrophe, and the cement was withdrawn from the market in 1995. In Denmark, special patient insurance legislation was passed in 1999 concerning economic compensation to patients with health-related consequences after operation with Boneloc cement.

During the years, it has been our impression that Boneloc-cemented Exeter prostheses faired quite well. Since no long-term results have been published, we find it of interest to present an 18-20-year follow-up evaluation of Boneloc cemented primary Exeter arthroplasty.

From March 1992 to June 1994, primary Exeter hip arthroplasty with Boneloc cement was performed in 200 consecutive hips/183 patients with a mean age of 71 (26-90) years by a total of ten surgeons. These hips were chosen because they had been included in a former internal review caused by the rather heated Boneloc debate in Scandinavia in the mid- and late 1990s, and we knew that this cohort showed exactly the same 5-year survival as our preceding and previously published series of Boneloc-cemented Exeter hips [4]. As all Boneloc hips were operated by virtually the same team of surgeons and according to the same indications and principles, we have no reason to believe this cohort should yield significantly different results in the long run compared with all of our Boneloc patients. Therefore, we anticipated that these well-documented 200 consecutive hips would provide a true and fair view of long-term implant survival. There were 104 female and 96 male hips and the diagnosis was osteoarthritis in 82.5%, femoral neck fracture sequels in 11.5%, rheumatoid arthritis in 3.5% and sequels after congenital hip dislocation in 2.5%. Revision of prosthetic components was documented by our own files and by the Danish Board of Health (National Patient Registry). All follow-up examinations and radiographic interpretations were performed by two independent observers (JD and DV). Clinical follow-up examination included a Harris Hip Score, the patient’s evaluation of the hip function and an antero-posterior radiograph of the operated hip because postoperative radiographs were only taken in one plane of the operated hip due to significant budget cuts in the early 1990s. All radiographic measurements were calibrated to the diameter of the prosthetic head (28 mm). Because the Exeter stem is the only implant for which an acceptable performance with Boneloc cement has previously been documented and because much of the earlier literature has focused upon stem performance, we chose to include all hips with an intact primary stem in the clinical and radiographic follow-up. In 12 hips/10 patients with severe dementia and/or severe medical problems, only follow-up by telephone was possible, but none complained of hip problems.

Prosthetic survival was assessed by the Kaplan-Meier analysis, and significance of proportions was calculated using Fisher’s exact test at p < 0.05.

Clinical follow-up in 24 hips/23 patients showed a mean Harris Hip Score (max. 100 points) of 78 (46-99) points and a mean pain score (max. 44 points) of 40 (20-44) points with no pain at all in 16 hips. All these patients were either very satisfied or satisfied with their hip prosthesis. A total of 12 hips/10 patients with a mean age of 90 (84-99) years who could not or would not attend because of medical condition/severe dementia were contacted by phone and did not disclose any decisive symptoms from their operated hips. A flow chart of the patients in the study is shown in Figure 1.

Postoperative radiographs were unavailable for four hips. At follow-up, evaluation stem orientation had changed in 3/20 hips, two into the valgus and one into the varus position. Subsidence greater than 2 mm, measured from the tip of the stem to the tip of the minor trochanter, was seen in 15/20 hips, measuring a mean 5 (3-8) mm corresponding to 0.27 mm/year. Subsidence between the stem and the cement mantle, which per se is not a negative feature with the Exeter stem, appeared in 13 hips. Subsidence between the stem, the cement mantle and the femoral bone, which can be an indication of loosening, appeared in two hips. An osteolytic scallop measuring 8 × 10 mm was seen in Gruen zone 7 in one hip. On the acetabular side, one cup with continuous lucent lines wider than 2 mm through all Charnley-DeLee zones and one cup which had changed inclination to a steeper position were considered as loose. Furthermore, one cup showed an osteolytic scallop measuring 2 × 28 mm in zone two, and another cup was suspected of medial migration of less than 2 mm. All hips with suspicious radiographic changes are continuously followed.

According to Aamodt et al [6], reliable evidence on the clinical effectiveness of biomechanical products can only be obtained by national registry data and by patient-derived data from long-term (10-20 years) clinical follow-up studies. They also stated that a documented clinical survival of 90% or better at ten years should be a minimum requirement for joint prostheses before they are taken into general use. New implants should therefore only be used as part of a stepwise preclinical and clinical study following the guidelines outlined by Malchau [7]. These recommendations are highlighted by the information from the Norwegian Arthroplasty Register [8] where inferior prosthetic brands and cement brands, including Boneloc, caused a substantial extra revision cost estimated to 1.7 million USD annually and by the study from Luo et al [9] from the Australian National Joint Registry, which stated that if implants of average longevity were selected instead of register-identified poorly performing hip prostheses, the rate of revision procedures would come down by 47%. These findings underline the importance of identifying and withdrawing as quickly as possible inferiorly performing prostheses and bone cement [10, 11].

In our patients, 92% of the hips were not revised after ten years and the cumulative survival was 89%, i.e. the same survival as reported by Hulleberg et al [12] for primary Charnley hips with high viscosity cement. These borderline satisfactory and certainly not alarming results are also supported by a study from the Nordic Arthroplasty Register Association [13] which showed a 10-year cumulative survival of 92.0-93.9% in primary hip arthroplasty in Denmark, Norway and Sweden, but in patients from a later period of time. Furthermore, similar results were found in a recent cohort study in Medicare beneficiaries from the US [14] which reported a 90% 10-year cumulative survival of primary hip arthroplasty in osteoarthritis.

Our 20-year survival is clearly inferior to the results from the Swedish Hip Register [15], mainly because of a continued high cup revision rate, and other studies have documented inferior survival of the Exeter cup compared with the stem [16, 17], which also is a clear, although not statistically significant tendency in our study. Hook et al [18] concluded that the metal-backed Exeter cup was a notable failure with 37.5% revision for aseptic loosening after mean 12.7 years. The failure rate in our patients with metal-backed cups was 22.8% after a mean 19 years, which is not statistically different from all polyethylene cups. Kalairajah et al [19] found that large Taperloc stems performed significantly better than small stems, and we experienced a similar tendency with the Exeter stem, although the tendency was not statistically significant (p = 0.09). Long-term clinical results are very satisfactory in the present study. At follow-up, all patients were satisfied or very satisfied with their hip with nearly no pain, but generally only a fair Harris Hip Score. According to Ritter et al [20], deterioration in the functional capacity of ageing patients is an important factor in longitudinal studies using scoring systems. In our study this functional deterioration thus accounted for 11 points in the Harris Hip Score.

Follow-up radiographs showed loosening of two cups and possible loosening of two stems, which showed subsidence in the cement-bone interface. As expected with this stem concept, subsidence was a common finding and of greater magnitude than with high viscosity cement [18].

After 18-20 years, Boneloc-cemented primary Exeter hip arthroplasty still shows a good clinical result and acceptable prosthetic survival. With a revision rate of 0.5%/year, the polished, collarless, double-tapered stem concept once again has proved its versatility, adaptability and durability after 40 years on the orthopaedic market. 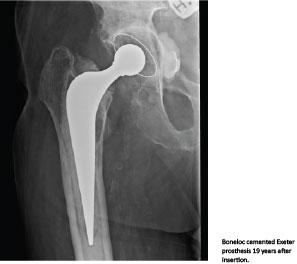 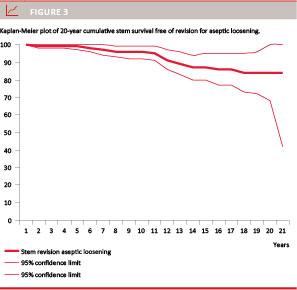 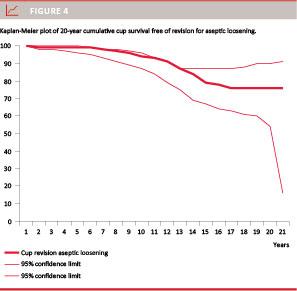 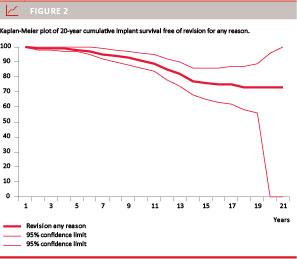