Post-osteoporotic fracture treatment remains suboptimal despite the availability of a well-tolerated, effective, low-cost treatment with bisphosphonates such as alendronate. The daily presence of geriatricians in the orthopaedic department with a focus on the post-operative treatment was expected to be a part of the solution.

Osteoporosis is defined by a low bone mineral density (BMD) leading to bone frailty and increased risk of fracture. The diagnostic criteria include a dual-energy X-ray absorptiometry (DXA) with a T score ≤ –2.5 with or without the presence of a fragility fracture (spine and/or hip) [1]. Osteoporosis most commonly affects postmenopausal women, and it is estimated that 9 mill low-energy fractures occurred in year 2,000 including fractures of the forearm, hip and spine [2]. Osteoporosis is believed to be markedly underdiagnosed which has serious implications for the prevention of osteoporotic fractures [3, 4]; and osteoporotic fractures significantly increase disability, morbidity and mortality [2]. Thirty to fifty percent of patients never regain their pre-fracture function [4, 5], and mortality after a hip fracture remains around 20% within the first year of the fracture [6, 7]. Furthermore, one osteoporotic fracture increases the risk of a second osteoporotic fracture more than six-fold [8, 9], which decreases the post-fracture functional status even further.

The purpose of the present study was to calculate the number of patients with a hip fracture who subsequently initiate treatment with anti-osteoporotic medicine. This was a one-centre, retrospective observational study, and we included all patients ≥ 65 years admitted to the department of orthopaedic surgery of the Copenhagen University Hospital, Herlev, with a hip fracture or other fractures close to the hip, from 1 June 2019 to 30 May 2020. This department of orthopaedic surgery has a catchment area of about 435,000 inhabitants.

Data, including number of deaths, were collected from the electronic hospital medical charts (Sundhedsplatformen). Prior medication review including purchased prescriptions are accessible through the Shared Medication Record (FMK). The last day of data collection was 28 December 2020, thus allowing a follow-up of 6-18 months, depending on the fracture date.

On day two after surgery, all hip fracture patients ≥ 65 years of age received a geriatric assessment by an orthogeriatric team. The team consisted of one geriatric specialist and one younger/non-specialised medical doctor, who were present in the orthopaedic department five days a week. Measures were obtained on heart rhythm, blood pressure, medication, previous mobility, etc., and the geriatricians focused on the reason for the fall, blood tests including vitamin D status, and decided whether the patient was a candidate for anti-osteoporotic treatment. Patients who were too frail or whose estimated remaining lifespan was shorter than 18 months were considered unsuitable for anti-osteoporotic treatment. Generally, patients with a new hip fracture who already received treatment for osteoporosis were recommended a new DXA to evaluate the efficacy of their pre-existing medication. When a patient was not referred for follow-up and further examinations in the Falls Clinic, the geriatrician encouraged the GP in the discharge letter to see to further examination and treatment for osteoporosis at the next visit. In case of a short admission, patients were in some cases discharged without a geriatric assessment during weekends and holidays.

All patients received a supplement of calcium and vitamin D twice daily (400 mg calcium and 19 μg vitamin D3). When the vitamin D level was below 50 nmol/l, the patient was further supplemented with additional D-vitamin twice daily for three months. The dosage depended on the level of deficiency. Further examination for osteoporosis awaited the normalisation of vitamin D levels.

A total of 627 patients were admitted with a hip or near-hip fracture in the one-year study period. At the time of the hip fracture, 570 patients were 65 years of age or older, 74% were women. Men were slightly younger than women at the time of fracture. At follow-up, 26% of the patients had died. No difference was recorded in age at the time of death between men and women. However, men had a higher death rate than women. On average, death occurred after three months, range: 1-400 days (Table 1). 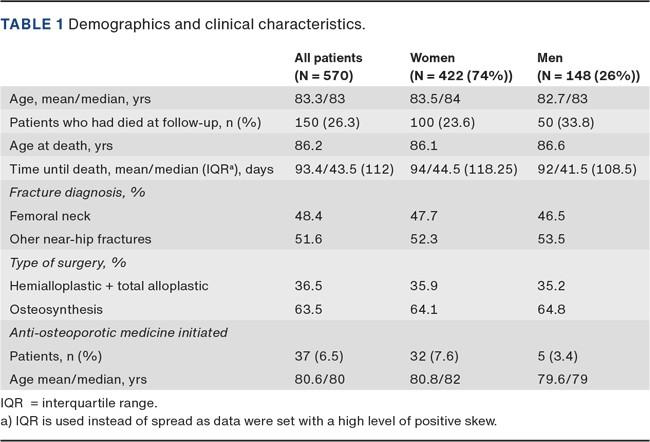 Out of 570 patients, 24 (4.2%) were referred to the Falls Clinic before discharge for further examination for osteoporosis. Seventeen patients (3%) were already in an outpatient clinic that managed osteoporosis at the time of their fracture. Further examination for osteoporosis/anti-osteoporotic treatment was not recommended in 73 (12.8%) patients. In the majority of cases, this was due to frailty, but also to kidney failure, disseminated cancer and pathological fractures, or in respect of the patient's wishes. A total of 39 of these 73 patients (53.4%) died during follow-up. Therefore, the GP was expected to follow up on anti-osteoporotic treatment in 345 patients (60.5%). At follow-up, 70 (20%) of these patients were being treated with anti-osteoporotic medication. Treatment was initiated in 18 patients (5.2%) who underwent follow-up at their GP (Figure 1). 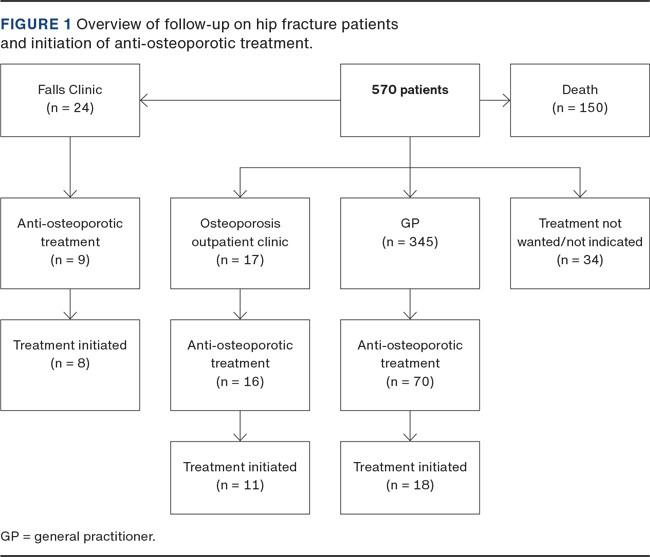 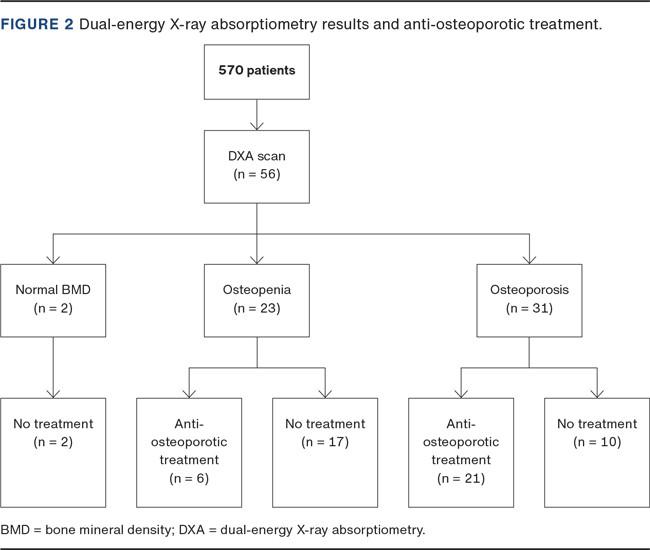 In this catchment area, the GP is responsible for the management of anti-osteoporotic treatment in most of the patients, i.e. all patients except for those who are followed in an outpatient clinic responsible for the management of osteoporosis, or where the patient is referred to the Falls Clinic following a hip fracture, in this case a total of 41 patients (7.1%). However, GPs do not have any outreach responsibility. This leaves it up to the patient or his or her next of kin to make an appointment with the GP to be examined for osteoporosis, which might be too great a burden to place on their shoulders immediately after a hip fracture which may have changed their mobility and affected their life considerably.

Even though a low-energy hip fracture is sufficient to diagnose a patient with osteoporosis, a DXA is recommended to determine the severity of bone demineralisation and to monitor treatment effects. We were surprised to find that only 9.8% had a DXA after their fracture and only 48% received anti-osteoporotic treatment at follow-up. Hence, we recorded a low DXA rate and insufficient follow-up if a DXA was, in fact, performed. This, again, may be linked to the fact that the patient or their next of kin is responsible for making an appointment with their GP both for the DXA and for the corresponding follow-up. Furthermore, 25 out of 56 patients (44.6%) who were evaluated by DXA had either osteopenia or a normal BMD, and only six of them received anti-osteoporotic treatment (24%). Even so, these patients have osteoporosis by definition and should be treated with anti-osteoporotic medication as such (Figure 2).

The lack of treatment for osteoporosis is clearly a serious problem that needs to be addressed. The optimal solution may be to initiate treatment when the patient is in the hospital, before discharge. Alendronate remains the first-choice treatment, but taking alendronate can be challenging for some patients. Alendronate must be taken on an empty stomach, at least 30 min. before breakfast, and the patient must remain in an upright position for at least 30 min. after taking the tablet before eating or drinking. It may be difficult to comply with these requirements. Furthermore, the medication is taken only once a week and that may be difficult to remember. When the medication is administrated by a home nurse, it may give rise to several practical problems. After giving alendronate to the patient, the nurse must wait or come back 30 min. later to give the patient the rest of the medicine.

When alendronate is not an option, zoledronic acid may be used instead. Zoledronic acid is a bisphosphonate that is administered intravenously every 12 months and has a similar low-energy-fracture-reducing effect and side effect profile as other bisphosphonates. A single study including 90 patients with hip fracture showed that zoledronic acid may be used in the treatment of osteoporotic hip fractures with proximal femoral nail anti-rotation when given within one week after fracture [19]. Another study in which zoledronic acid was given to frail elderly osteoporotic women showed that the treatment improved their BMD for two years [20]. These results seem very promising and may be part of the solution.

The post-hip-fracture anti-osteoporotic treatment rate remained alarmingly low and few patients were examined with DXA. The reasons are numerous including poor compliance, forgetfulness, contraindications and practical problems, etc.; and the considerable responsibility for initiating treatment typically rests with the patients and their next of kin. Starting treatment with anti-osteoporotic medicine before discharge from the orthopaedic department and referring the patient for a DXA at the same time may be part of the solution. Even so, we are far away from the goal.

Correspondence Mette Midttun. E-mail: mette.midttun@regionh.dk Accepted 28 June 2022Conflicts of interest none. Disclosure forms provided by the authors are available with the article at ugeskriftet.dk/dmjCite this as Dan Med J 2022;69(10):A01220010