Dyspnoea is a common chief complaint in emergency department (ED) patients and is associated with a high mortality [1]. Asthma, chronic obstructive pulmonary disease (COPD), heart failure (HF) and pneumonia are the most frequent causes of dyspnoea, but distinguishing between causes is challenging [2]. Recent studies have questioned the quality of the diagnostic work-up for these patients. One study of geriatric dyspnoeic ED patients found that physicians tended to safeguard themselves by stating more than one diagnosis and administering more than one treatment [3]. Another study found that longer hospital stay and increased mortality occurred among dyspnoeic adult ED patients in cases where the correct diagnosis was uncertain [4]. However, among patients admitted from the ED to other units, the impact of diagnostic uncertainty remains unclear. Therefore, to guide initiatives that may help improve the ED management of dyspnoeic patients, it is of potential importance to characterise these patients and to determine the influence of an uncertain diagnostic aetiology. In this study, a change in diagnosis from the ED to hospital discharge served as a surrogate measure for an uncertain diagnostic aetiology.

The aim of this study was to characterise ED patients who had been admitted for dyspnoea and experienced a change in diagnosis in the period from ED contact to hospital discharge, and to investigate any association with length of stay (LOS), readmission and mortality.

This cohort study was based on routinely collected patient-record data from all ED contacts at Aarhus University Hospital (AUH) in Denmark from 1 July 2016 to 30 June 2017. The ED at the AUH includes an emergency room, a trauma centre and two acute medical units; we characterised patients in any of these ED units as ED patients. All other hospital departments and units were characterised as inpatient units. The EDs in Denmark only see referred patients who have already been consulted in primary care or emergency medical services. Locally at the AUH during the inclusion period, obstetric, psychiatric, end-stage cancer, acute myocardial infarction and stroke patients bypassed the ED and were therefore not present in this cohort. Likewise, patients received by coded rapid-response teams (i.e., trauma, surgical or medical emergencies) were not triaged with their chief complaint and were therefore not present in this cohort. This study was presented in accordance with the RECORD Statement, an extension of the STROBE Statement [5].

To strengthen the use of a change in diagnosis as a surrogate measure for ED diagnostic uncertainty, patients with an ED diagnosis from chapters R (“Symptoms, Signs and Abnormal Clinical and Laboratory Findings, Not Elsewhere Classified”) or Z (“Factors Influencing Health Status and Contact with Health Services”) of the International Classification of Diseases, tenth edition (ICD-10) were excluded from the outcome analyses but retained for descriptive characteristics. When given this diagnosis, they were already regarded as patients with diagnostic uncertainty in the ED. In addition, patients who died in the hospital were excluded from the outcome analyses. In the outcome analyses, only index contacts were included.

The exposure (i.e., a change in diagnosis) was based on the main ICD-10 diagnosis assigned by the treating physician in the ED and the treating physician at the time of discharge. Diagnosis registration was standard mandatory coding in the electronic medical record, and ICD-10 diagnoses were collected from there. The ICD-10 diagnoses present in the data were categorised and grouped with ICD-10 diagnoses that were clinically similar in terms of symptoms, diagnostic work-up and ED treatment (see code in supplementary material: https://ugeskriftet.dk/files/a06210495_supplementary.pdf). A diagnosis was defined as discordant when the categorised ED diagnosis differed from the categorised hospital discharge diagnosis; and as concordant in the case of agreement between the two.

The outcome measures were LOS, seven- and 30-day readmission, and 30-day mortality. The LOS was computed as hours spent in the hospital after transfer to an inpatient unit, thereby excluding time in the ED. Readmission was defined as admittance within seven or 30 days from the previous hospital discharge, if any; patients with elective or minor trauma or injury contacts were not admitted and were therefore not included as readmissions. Mortality was defined as having a death registration in the Danish Civil Registration System dated within the 30-day period following hospital discharge [7, 8].

Potential confounders included in the adjusted analyses were age, gender, triage urgency and length of ED stay. Age was coded as age on ED arrival. Triage urgency was categorised as blue, green, yellow, orange or red in the initial triage registration, based on the chief complaint algorithm and the patient’s vital signs. ED time was computed as time from the patients’ arrival at the ED to their transfer to an inpatient unit.

This study used predefined data on all patient contacts with dyspnoea as chief complaint during the study period. Data were disclosed from the regional data warehouse with 100% completeness of identifiers. All data tables were linked by using data warehouse surrogate keys for contacts and entity keys for citizens. We combined the hospital stays of consecutive non-elective contacts into one when overlapping or succeeding, but separated by a shorter than 12-hour interval between discharge and admittance.

Descriptive continuous data were reported as means (with standard deviation) or as median (with interquartile range). Categorial data were described as numbers with percentages. Outcome data were analysed using a multiple linear regression model to compute the geometric mean and the crude and adjusted LOS. Logistic regression models were used to conduct the odds ratio (OR) computations for binary outcomes. All models were adjusted for age and gender. Additionally, the multiple linear regression model for LOS was adjusted for triage urgency and length of ED stay. 95% confidence intervals (CI) with a two-sided significance level of 0.05 were reported for all effect measure estimates. p-values from the adjusted analyses were reported and were considered statistically significant if they were below 0.05.

Among 1,804 ED patients with dyspnoea, 906 were admitted, 402 were concordant and 237 were discordant. Furthermore, 224 with an R and 43 with a Z diagnosis were excluded from the outcome analyses. Among the 639 concordant or discordant contacts, 563 were unique patients of whom 39 died in the hospital. Thus, the outcome analyses included a total of 524 patients. In terms of characteristics, it was found that discordant patients were more frequently admitted on weekends or public holidays, were more frequently triaged red and had higher admissions rates to the intensive care unit than concordant patients. There was no difference in age, sex or comorbidity between discordant and concordant patients (see Table 1). 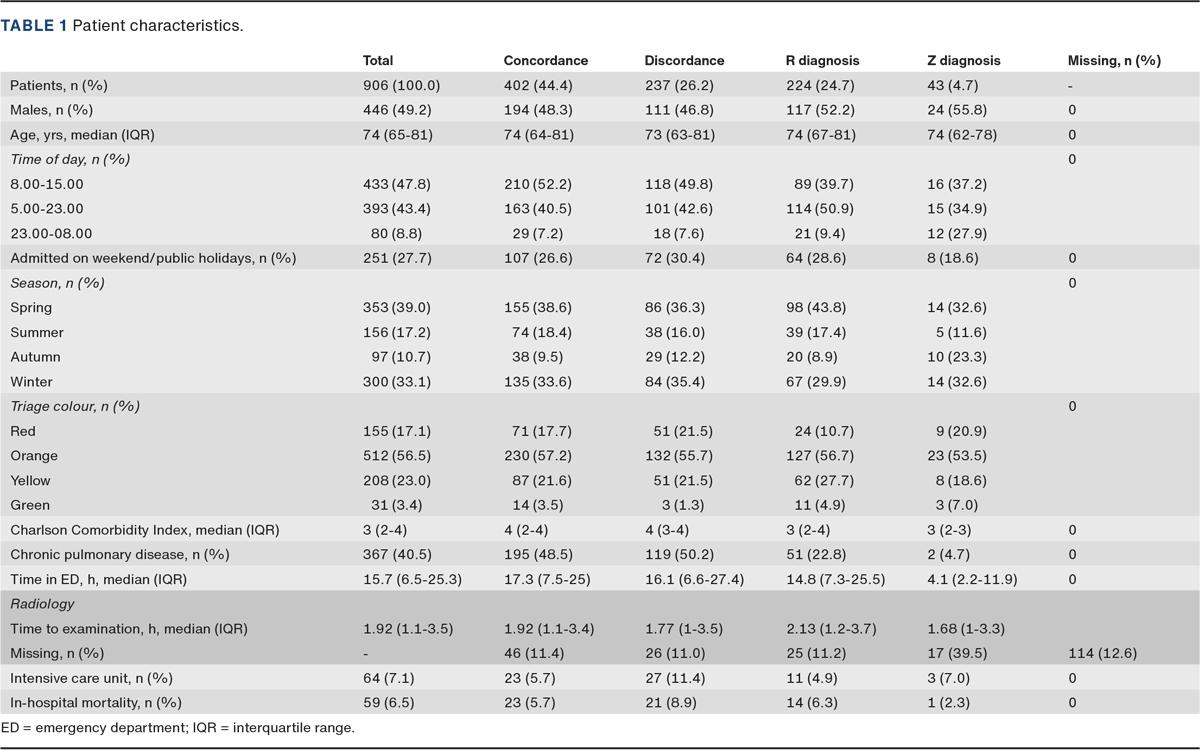 Table 2presents an overview of the top ten diagnostic categories (see https://ugeskriftet.dk/files/a06210495_supplementary.pdf) used in the ED and at final hospital discharge. Pneumonia and COPD accounted for the majority of the diagnoses among dyspnoeic patients. The diagnostic concordance of both was 67%. Diagnoses of HF and asthma each made up 2% of the ED diagnoses; their diagnostic concordance was 81% and 88%, respectively.

Discrepancies between studies may be explained by several factors. The selectivity of the patient group seen in the ED and the flow characteristics and local provisions guiding admission to inpatient units are determinants of the probability of a change in diagnosis. For example, Danish EDs receive a selected patient group that has often already received a primary care consultation. This is fundamentally different from EDs in, e.g., the US, UK and Sweden. In the population of the present study, HF only represented 2% of all ED diagnoses, which is very different from that observed in studies based in the US [2, 9, 10]. In Danish health care, many patients with HF are probably treated sub-acutely in cardiac outpatient clinics and primary health care. Furthermore, HF patients may be assigned different chief complaints depending on triage tool used. In the Danish Emergency Process Triage tool, a chief complaint labelled “Oedema” could potentially shift these proportions.

The clinical implications of the findings presented in this study are that emergency physicians should strive to achieve as precise a diagnosis as possible. Notably, settling on the most appropriate diagnosis between COPD and pneumonia may potentially benefit patient-important outcomes, as these aetiologies are, by far, the most frequent. In the present study, among patients initially diagnosed with COPD, 14% were discharged with pneumonia; 8% of those initially diagnosed with pneumonia were discharged with COPD. Among the less frequent diagnoses, we found a higher concordance rate in, e.g., asthma and HF. These results are more sensitive to variability due to the lower absolute numbers, but it is possible that the aetiological pattern (e.g., history, objective examination and testing) is more distinctive in asthma and HF than in COPD and pneumonia.

Another useful finding for clinicians is that comorbidity and age adjustment did not change our results; this may indicate that a change in diagnosis is not more common in geriatric patients, despite atypical disease presentations.

There are several limitations to this study. First, the data were disclosed retrospectively rather than collected purposefully with this study in mind (e.g., the used diagnoses were from routine care). The physicians’ objective findings and diagnostic reasonings and the patients’ symptoms and comorbidities were not accounted for; it would be preferable to collect these data in a future cohort study. Second, the use of an unvalidated diagnosis categorisation based on the diagnoses solely found in this cohort lowers its generalisability, as diagnosis categorisation is crucial for the definition of the exposure. We conducted an a priori inspection of the traditional ICD-10 groups and blocks and found them to be either too narrow or too broad. The diagnosis categorisation code applied is our best suggestion for a categorisation that captures relevant changes within common diagnoses among dyspnoeic patients in the ED. Third, we excluded from the outcome analyses patients with a R or Z diagnosis as ED diagnosis. We regard their diagnosis registration as potentially misleading in the context of uncertain diagnostic aetiology. Since little is known about why so many patients are assigned these diagnoses, it would be speculative to assess the direction of the bias introduced. Fourth, readmission was defined using a 12-hour margin. This was preferred over a four-hour margin, which might have resulted in the accidental identification of ordinary in-hospital transfers as readmissions and, accordingly, an overestimation of the readmission rate. Due to these circumstances and keeping in mind the observational nature of this study, it must be stressed that the observed associations do not imply a causal relationship.

Among dyspnoeic ED contacts, we found an association between a change in diagnosis from the ED contact to hospital discharge and a longer LOS. A similar association was found between 30-day mortality and a change in diagnosis. These results may indicate that even though patients are admitted and further evaluated in inpatient units, the effort used to acquire diagnostic certainty in the ED may have an impact that lasts throughout the entire hospital stay.

Correspondence Stig Holm Ovesen.E-mail:stigholm@clin.au.dkAccepted 14 December 2021Conflicts of interest none. Disclosure forms provided by the authors are available with the article at ugeskriftet.dk/dmjAcknowledgements The authors gratefully acknowledge the contributions of Anne Aavad Mortensen for data management and the Data Office at Aarhus University Hospital, with special thanks to Data Consultant Erik Soeters.References can be found with the article at ugeskriftet.dk/dmjCite this as Dan Med J 2022;69(2):A06210495