It is a topic of on-going debate whether male ritual circumcision in childhood is a violation of the United Nations’ Declaration of the Rights of the Child or whether the parents’ right to apply ritual circumcision to their boys is safeguarded by the Human Rights Council Resolution on human rights and fundamental freedoms through a better understanding of traditional values of humankind [1, 2]. This is mainly an ethical and political issue. Male ritual circumcision in childhood is performed legally in most countries, and recently The American Academy of Pediatrics changed their guidelines and stated that “evaluation of current evidence indicates that the health benefits of newborn male circumcision outweigh the risks, and the benefits of newborn male circumcision justify access to this procedure for those families who choose it” [3].

But the risk of these diseases can also be reduced by other means in most parts of the world [1, 7]. Two large American studies on elective newborn circumcision estimated the risk of significant acute complications to be between 0.19% and 0.22% [8, 9]. There was, however, no adequate long-term follow-up in these studies, and the data may not represent complication rates after newborn circumcision everywhere. Furthermore, in Europe ritual circumcision is very often carried out later in childhood. Moreover, based on a British analysis of the general complication rate after childhood circumcision [10], a realistic overall complication rate of 2-10% has previously been accepted in American paediatric surgery textbooks, Canadian consensus reports and national editorials [11-13].

As a consequence of the aforementioned discussion and the discrepancies in the complication figures, we evaluated our results from a paediatric surgery department with free admittance and regional health care reimbursement of the procedure to obtain further knowledge on childhood circumcision complication rates.

In a retrospective study, we included children aged 0-16 years who had undergone ritual circumcision in the 1996–2003-period at our department. The patient file data were retrieved using the Nordic classification procedure code of ritual circumcision: KKGV20. Re-admittance to our department until December 2011 due to circumcision complications was noted. Furthermore, the national register system was searched for patient contacts with a urological diagnosis to other hospitals. In this system, it appears clearly if a patient is dead.

Circumcision was performed as a surgical procedure in general anaesthesia with caudal block. After lancet or scissor preputial resection and haemostasis made by bipolar electrocautery, the inner and outer layer of the foreskin was anastomosed with interrupted absorbable 6-0 sutures. If present, a short ventral frenulum was divided with bipolar electrocautery. Paracetamol was used for postoperative pain management for a couple of days.

We excluded 47 patients from evaluation of complication rates: seven had presented with urinary tract infection before admittance for circumcision, 16 were registered with phimosis before circumcision, four had circumcision after a primary glanular hypospadias repair, one had epidermolysis bullosa and 19 boys had a circumcision performed after a previous circumcision had been performed elsewhere. The indications were excessive residual skin with or without phimosis issues. The results of circumcision in 315 boys aged from three weeks to 16 years (median five years) were left for evaluation (34 boys were younger than two years of age). There were no complications recorded in 295 cases (93.7% (95% confidence interval (CI): 90-97%)). No major complications such as glans or penile amputation, urethral cutaneous fistula and death were recorded. Among 20 patients with recorded complications, four were absolutely minor, including two patients presenting three days and two weeks, respectively, after operation with oedema of the penis that needed no treatment, and two patients with complaints of excessive residual skin 15 and 19 month postoperatively needing no further treatment. So 16 boys (5.1%) had significant complications including three incomplete circumcisions requiring re- surgery three,12 and 18 months postoperatively, two requiring re-surgery six months and five years postoperatively due to fibrotic phimosis, two requiring meatotomy due to haematuria and meatal stenosis two and three years postoperatively (in children aged 11 and 8 year, respectively). Acute complications included treatment of two superficial skin infections one week postoperatively, five cases with prolonged stay or re-admissions for bleeding the first or second postoperative day, whereof three needed compression for haemostasis and two required operative treatment. Finally, two had anaesthesiological complications (one case of suspected aspiration and one larynx spasm) requiring overnight surveillance in ward, but no further treatment.

In this material, 2.9% of the boys had acute complications after circumcision, but none septicaemia or major irreversible penile damage. An additional 2.2% had late complications during an 8-15-year follow-up period. These complication rates are in line with those reported by other comparable studies [10]. Excessive bleeding is the most common acute complication, and a rate of 1.6% could be expected [3, 10]. Among late complications, skin bridges and insufficient removal of the foreskin are the most common complaints [14, 15]. Unsatisfactory cosmetic appearance may be an indication for re-operation, and MacCarthy et al [15] reported this figure to be 1% in a British study. Insufficient excision of the foreskin and inner preputial epithelium may result in wound contraction and cicatrisation of distal foreskin. The fibrotic ring so produced may result in true phimosis, an event observed in 2% of the cases in another British series [16]. Interestingly, we had 19 referral cases for excessive residual skin with or without phimosis issues.

The referrals concerned reoperation following primary circumcision carried out elsewhere during the study period. However, the exact incidence of circumcision in our catchment area remains unknown. In our series, no serious complications were seen. But the literature describes other acute complications such as penile denudation injuries and septicaemia; the latter in some cases even causing death [3]. Also penile and glance amputation have been described and among late complications, concealed penis, urthrocutaneous fistula and glans atrophy have been seen [3, 17].

Meatal stenosis is a well-described late complication, which occurred in 0.6% of our own material. This figure is in accordance with the 0.5% rate reported in a study by Van Howe [18], but much higher rates have been described in the literature [10]. Meatal stenosis is generally a direct consequence of circumcision or hypospadias surgery that is seldom seen in non-operated boys. The aetiology is thought to be irritation of the external urethral meatus by the surrounding textile tissue. Such irritation is unlikely in the presence of a normal prepuce, which serves to protect the glans from irritant substances. Meatal stenosis may be a more common late complication after neonatal circumcision due to irritant ammoniacal substances present in wet nappies [10, 19]. The majority of our boys were circumcised after the age of two years and would therefore not benefit from a reduced risk of urinary tract infection before two years of age. However, one cannot exclude that by ritual circumcision a few boys from the total material may have avoided phimosis-related symptoms and balanitis xerotica obliterans which is seen in a significant proportion of phimosis cases needing surgery [20]. Still, it is likely that less than 1.5% of boys need surgery, and those who need it can be treated when their phimosis is becoming symptomatic [20].

Our patients are operated by skilled surgeons in a paediatric surgery department. From a surgical point of view, our complication rate seems acceptable. No major complications were seen. But there is no doubt that in a paediatric population as ours, the possible health benefits of childhood circumcision do not outweigh the reported complication rate. Furthermore, the weakness of our study includes the risk of under-reporting complications during follow-up if treated privately or abroad, and because we have taken no psychological or late sexual complications into consideration. Given that ritual circumcision in childhood is legal and accepted as a fundamental part of traditional values of humankind, the best thing we can do to protect these asymptomatic healthy boys against complications is probably to focus on high surgical and anaesthesiological standards.

Before surgery, parents should be counselled in detail and should be required to provide their informed consent that the possible health benefits of childhood circumcision do not outweigh the reported complication rate, and that they have weighed the health benefits against the risks in the light of their religious, cultural, and personal preferences. 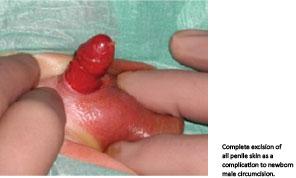