Antibiotic resistance is a growing threat to public health worldwide [1]. The rising problem of antibiotic resistance is due mainly to high antibiotic prescribing rates [2]. Overall, 90% of antibiotics are prescribed in general practice [3], and most of these prescriptions are for acute respiratory tract infections (RTIs) [4]. However, most RTIs are self-limiting and often of viral origin, and antibiotics will therefore have limited or even no effect [5]. Furthermore, the risk of serious complications like mastoiditis or quinsy is very low in developed countries, even without antibiotic treatment [6].

Prescribing rates in Northern Europe, including Denmark, are relatively low, and often narrow-spectrum penicillin is prescribed [7]. However, the total antibiotic use in Denmark has risen during the past decade and the rise has predominantly been observed for broad-spectrum antibiotics [3].

Various factors have been associated with high prescribing rates in general practice, such as difficulties in differentiating between viral and bacterial origin [8], doctor characteristics [9] as well as the patients’ expectations and the doctors’ perception of patient expectations [10-12]. Patient expectations of a consultation are continually being explored, and studies have demonstrated a varying demand for antibiotic treatment [10, 12, 13]. International studies demonstrate that patients are seeking reassurance and symptom relief [14] and that patient satisfaction is associated with receiving proper information [10, 12]. This indicates a need for better communication and understanding between the general practitioner (GP) and his or her patients.

The aim of this study was to explore Danish patients’ expectations when consulting their GP with symptoms of RTI and to determine predictors for these expectations in order to optimise antibiotic prescribing in general practice.

During a four-week-period in January to March 2014, a questionnaire survey was conducted in Danish primary care in the Region of Southern Denmark and Region Zealand. This survey was part of an audit of consultations dealing with patients with RTI symptoms. All GPs in the two regions were invited to participate in the study.

The GPs had received written information about the project and were asked to ensure that patients received thorough information about the survey and gave their verbal consent to receive a questionnaire before they were enrolled. Patients aged ≥ 18 years consulting their GP with RTI symptoms were informed and asked to participate in the project. Patients who accepted the invitation were sent a questionnaire within a week from their consultation, and a reminder was sent after one month to all non-responders.

In accordance with Danish legislation, no ethical approval was needed for this study. The project was approved by the Danish Data Protection Agency (R. no. 2013-41-2582).

To explore their expectations to the consultation, patients were asked the following three questions:

1) “I primarily saw my GP because I wanted an

explanation of my symptoms”

2) “I primarily saw my GP because I wanted to

3) “I primarily saw my GP because I wanted to

be treated with antibiotics”.

Patients were asked to rate their agreement with the questions on a five-point Likert scale, ranging from 1

(= totally agree) through 3 (= neither agree nor disagree) to 5 (= totally disagree). The respondents were allowed to choose more than one of the expectations.

In addition, we gathered sociodemographic information (age, sex, educational level, labour market affiliation, educated/working in healthcare or agriculture) and patients were asked if they were prescribed an antibiotic (self-reported antibiotic prescription).

The development of the questionnaire followed standardised and widely recognised procedures, including qualitative pilot testing [15]. Preceding the pilot testing, a discussion and content validation was conducted in an academic setting counting GPs, a clinical pharmacologist and a clinical microbiologist. The questionnaire was pilot tested through observational responses to ensure comprehensibility, relevance, acceptability and feasibility. This triggered some minor adjustments. Proofreading was conducted on 5% of data with the finding of zero errors.

The five-point Likert Scale used for the assessment of patient expectations for the consultation was categorised into “Yes” (totally agree and agree), “Don’t know” (neither agree nor disagree) and “No” (disagree and totally disagree). For regression analysis, we dichotomised the answers into “Yes” (totally agree and agree) and “No” (neither agree nor disagree, disagree and totally disagree). Age was categorised as follows: 18-30, 31-45, 46-60 and > 60 years. Labour market affiliation was

defined as “Within labour market” (students, self-employed or salaried employee, on leave or sick-leave and other), and as “Out of labour market” (receiving early retirement pension or old age pension and unemployed or receiving disability pension). Missing values were excluded from the data. No more than 20 (5.5%) missing values were deducted from any single variable.

Trial registration: This study was registered with the Danish Data Protection Agency (R. no. 2013-41-2582).

A total of 1,049 patients were recorded with RTI symptoms during the study period. About half of the potential participants (n = 567) were registered as interested in receiving a questionnaire, 361 of whom responded 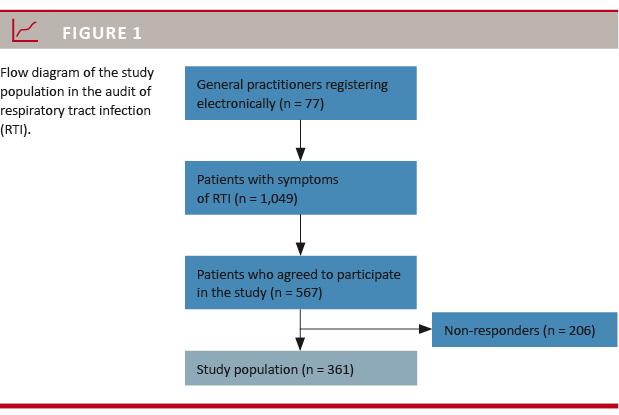 The sociodemographic characteristics of the study population are listed in Table 1. 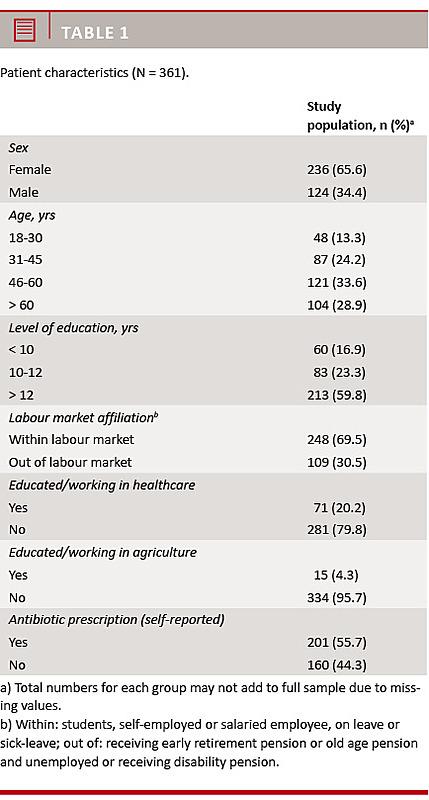 The majority of Danish patients consulting the GP with symptoms of an RTI primarily expected an examination (94.6%) as well as an explanation of their symptoms (85.9%). About 32% of the patients expected antibiotic treatment (Table 2). 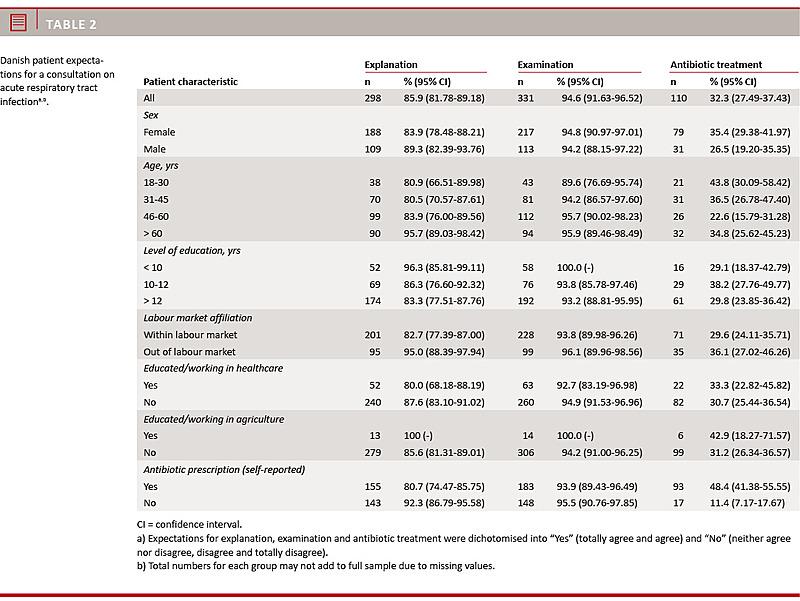 Table 2 also illustrates socio-demographic characteristics and self-reported antibiotic prescription in relation to patient expectations. We observed no major differences between female and male patients with regard to expecting an explanation (83.9% versus 89.3%) or an examination (94.8% versus 94.2%). However, more female patients expected an antibiotic treatment for their RTI symptoms (35.4% versus 26.5%).

Odds ratios (OR) for the associations between patient expectations, patient characteristics and antibiotic prescriptions are shown in Table 3. 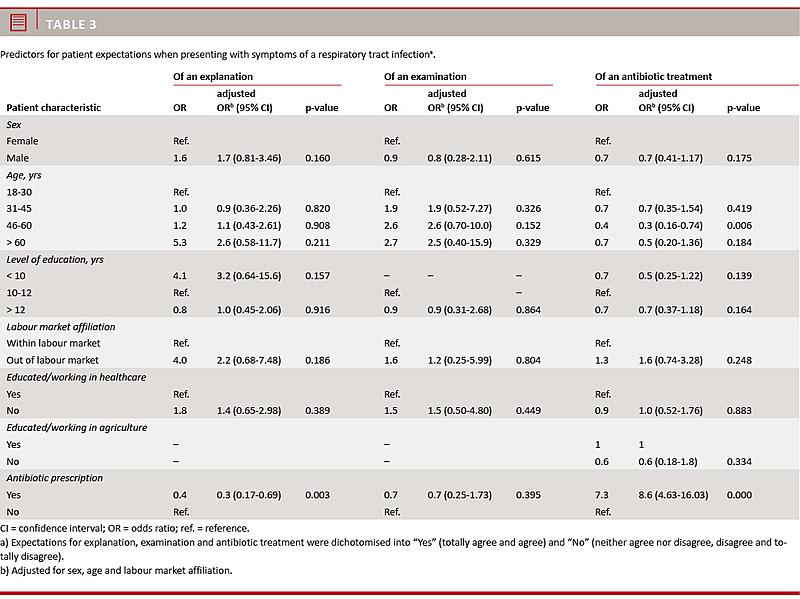 To our knowledge, this is the first study to explore Danish patient expectations for consultation regarding RTI symptoms. However, some limitations need to be kept in mind when interpreting the study results.

The GPs participated on a voluntary basis in the audit and those who participated may have been more interested in quality development than other GPs in Denmark [16]. Strandberg et al have previously shown that GPs who participate in an audit on RTI treatment differ from the onset from GP non-participants with respect to their prescribing patterns [17]. This may affect their patients’ expectations, since they may already be aware of the limited effect of antibiotic treatment on most RTIs. Consequently, the expectations of an examination and/or an explanation could have been overestimated, whereas the expectations for antibiotic treatment could have been underestimated.

Only about half of the potential participants were registered as being interested in participating in this survey (567/1,049). Lack of time for enrolment during GP consultations, GPs simply forgetting to inform patients about the survey or GPs judging that the patient should not take part in this survey might be some of the explanations for this finding. This limitation might have been overcome if the research team had approached patients with RTI symptoms directly. However, a relatively large response rate of 64% was obtained among those asked to participate (361/567).

Previous studies have found that patient expectations did not change significantly between pre-and post-visit questionnaires [10, 14]. However, we still find it

important to emphasise that this study is based on a post-visit questionnaire and that patient expectations may have been influenced by the information given during the preceding consultation.

Many patients stated more than one “primary expectation” for the consultation. Consequently, it is not possible to report which one was more important for the patients. In order to estimate patients´ true priority of expectations, a rating of these could have been requested.

Dichotomisation might lead to loss of information. However, this approach is commonly applied and we believe that patients who neither agreed nor disagreed could not have had a clear expectation about the question, why these were included in “No”.

Finally, it is important to acknowledge the variety of diseases when dealing with RTI symptoms. Some patients might have been presenting with symptoms of pneumonia, others might have been presenting with symptoms of a common cold. We cannot rule out cohesion between severity of the symptoms and expectations of antibiotics. However, the indication and severity of the symptoms were not available in our data and thus could not be adjusted for in a multivariate analysis.

Comparison with existing literature and implications

This study demonstrates that Danish patients were more likely to expect an examination and an explanation than an antibiotic treatment when contacting their GP with RTI symptoms. Our findings are in accordance with Welschen et al who showed that 90% of Dutch patients expected information, while only 50% expected antibiotics [12]. Furthermore, they found that information/reassurance was more strongly associated with patient satisfaction than antibiotic treatment.

antibiotics were of little/no importance. This finding may indicate that patients who report that they expect antibiotics are actually asking for pain relief medication. Other studies have also found that patients want a diagnosis, reassurance and relief from symptoms or pain rather than antibiotic treatment [13].

This study contributes to a better understanding of Danish patient expectations. Interestingly, 55.7% reported that they were treated with an antibiotic, while only 32% expected an antibiotic prescription. Appropriately managing patient expectations in consultations for an RTI is crucial in reducing inappropriate prescribing. GPs are nearly three times more likely to prescribe antibiotics if they believe that their patients expect antibiotics [18] as perceived patient demand has been found to have a significant and independent effect on prescribing behaviour [19]. However, it has also been shown that there is a large degree of inaccuracy in doctors’ perception of their patients´ desire for antibiotics [10]. Consequently, interventions that reduce patients’ perceived need for antibiotics and reduce demand should be tested in Danish general practice. For example, a newly published Cochrane review found that interventions facilitating shared decision-making for RTIs significantly reduced antibiotic prescribing in general practice [20].

Danish patients with RTI symptoms mainly expected an examination and an explanation, and to a far lesser extent antibiotic treatment, when consulting their GP. Importantly, patients who reported that they expected an antibiotic prescription were more than eight times more likely to be prescribed one.

CONFLICTS OF INTEREST: Malene Plejdrup Hansen received funding in the form of a postdoctoral scholarship in general practice and family medicine from The Novo Nordic Foundation. Disclosure forms provided by the authors are available with the full text of this article at www.danmedj.dk

ACKNOWLEDGEMENTS: This project is part of the Audit Project Odense (APO), Denmark. The questionnaire, on which the study is based, was

Lars Bjerrum and Bente Gahrn-Hansen. The authors would like to thank