Overweight is a growing problem in children and adolescents worldwide and is associated with high blood pressure (BP) and with an increased risk of cardiovascular disease in adulthood [1, 2].

BP and body mass index (BMI) are well-known measurements for the clinician. However, reference values for these measures are difficult to determine because of growth and development in children and adolescents. BP and BMI may therefore be standardised into z scores to adjust for gender, age, and height in standard normal populations in order to obtain estimates that can be compared across gender and age [9, 10].

Recently, using a validated oscillometric device, we found that a group of obese children and adolescents had a higher BP than a healthy control group [11].

The objective of the present study was to investigate to which extent the higher BP in the obese group was dependent upon differences in cuff sizes.

Obese patients aged 10-18 years who were enrolled in the Children’s Obesity’s Clinic, Holbaek Hospital, were invited to participate in the present study. The clinic receives paediatric patients with a BMI percentile above the 90th (equal to a z score of 1.28) for gender and age according to the Danish BMI charts [12]. The recruitment period was from January 2011 to January 2012. Difficulties in communication were the only exclusion criterion. A total of 104 obese patients were enrolled into the study. Concurrently, 50 age- and gender-matched controls with an assumed representative normal weight range were recruited among hospital staff’s offspring and school children and adolescents in the region in the hospital’s catchment area. Measurements were performed no later than two months after the patient’s first outpatient visit.

The study was recorded with ClinicalTrials.gov (NCT01310088), the Danish Data Agency and approved by The Scientific Ethical Committee of Region Zealand. Written informed consent was obtained from parents and subjects aged 18 or above according to the Declaration of Helsinki.

Height, weight and waist circumference (WC) were measured as described previously [11]. BMI (kg/m2) was calculated and converted into z scores with reference to the distribution of BMI in a Danish standard population with the same age and gender [12]. AC was measured to the nearest 0.1 cm at the midpoint of the upper arm.

BP was measured with the oscillometric device Omron 705IT (Omron Healthcare Europe), which has been validated for use in children and adolescents [13]. Appropriate cuff sizes were used in conformity with the manufacturer’s recommendation: small (AC < 23 cm), medium (23 ≤ AC < 32 cm), and large (AC ≥ 32 cm). With the given appropriate cuff size, individuals had three BP measurements made after a minimum of ten minutes of rest in the supine position in a quiet room. The mean of the last two of the three BP measurements made was reported and z scores calculated according to an American standard population based on the person’s gender, age and height [9]. Systolic hypertension was defined as systolic BP (SBP) > 95th percentile (equal to a z score of 1.64) for gender, age and height.

Statistical analyses were performed using SAS software (version 9.2, SAS Institute). Comparisons of continuous variables between the obese and the control group were performed with unpaired t tests when normally distributed; otherwise, the Wilcoxon rank sum tests were used. Differences in categorical variables were investigated with the chi-squared test or Fisher’s exact test if an expected frequency was less than five in any cell of a contingency table.

Relationships between variables were described with linear regression analyses and Pearson’s correlation coefficient (rP) when linear regression model assumptions could not be met. In multiple regressions analyses, the association between BP measurement (outcome) and a group variable (obese versus control group) was investigated when adjusting for cuff size and relevant confounding explanatory variables (gender, age, height and heart rate).

The obese and the control group were recruited based on the degree of obesity (BMI z score). Hence, the group variable (obese versus control group) encompasses the differences in obesity body composition measures due to the design of the study. Potential inter-relationships, i.e. collinearity (rP > 0.8), between the obesity body composition measures were investigated.

Characterisation of obese and controls

Findings for SBP in mmHg in Figure 1A were reproduced when SBP z score was plotted in relation to AC for each cuff size in Figure 1B. However, a correlation between SBP z score and AC existed in controls who used the small cuff (rP = 0.56, p = 0.04). Furthermore, no difference was found between controls who used the small and the medium cuff size. The percentage of systolic hypertensives in the obese group and the control group for each cuff size is presented in Figure 2B.

Collinearity was found when the obese and the control group were pooled as intended for the multiple regression analyses (WC and AC: rP = 0.92, p < 0.0001/BMI z score and AC: rP = 0.82, p < 0.0001). Hence, the anthropometric measures were not included in the multiple regression analyses which by study design included the group variable (obese versus control group).

DBP was 3.2 mmHg higher in the obese group than in the control group independently of cuff size and relevant confounding variables. The cuff sizes were not associated with the DBP in mmHg.

The higher SBP and DBP in mmHg in the obese group were reproducible when smokers and individuals receiving medication were excluded. In multiple regression analyses, SBP and DBP z scores did not differ between the obese and the control group, but in these analyses, the large cuff size was significantly associated with a higher both SBP and DBP z score when compared with the medium size.

Previous studies have found a higher BP in obese children than in normal-weight children by use of oscillometric BP devices [15, 16]. However, the effect of cuff size on the results of BP measurements was not considered in these studies.

In agreement with the present study, others have demonstrated that bias can be introduced when more than one cuff size is being used even when appropriate cuff sizes are used [5, 17]. A study by Whincup et al [5] using both auscultatory and oscillometric devices demonstrated that a change from one cuff size to a larger cuff size resulted in a step function, i.e. a sudden fall in BP. We found a similar step function at the point of changing from the small cuff size to the medium cuff size in the control group, but this was not seen at the point of changing from the medium cuff size to the large cuff size in the obese group (Figure 1A and Figure 1B). These findings suggest that in the obese group, the BP increased with increasing AC and BMI even when taking the influence of cuff sizes into account. SBP in mmHg seemed higher for control individuals than for obese subjects for those using the medium cuff size at a given AC. This may be explained by a lower height in the obese children than in controls. Likewise, leanness and a higher height may explain the higher SBP in mmHg in controls when the small cuff size is used compared with controls in whom a medium cuff size is used.

In our adjusted analyses, the small cuff size was associated with a higher SBP in mmHg than when the medium cuff was used, whereas the large cuff size was associated with higher both SBP and DBP z scores compared with the medium cuff. The varying influence of the cuff sizes on either SBP in mmHg or z scores may appear contradictive. The association between the small cuff size and a higher SBP in mmHg may be due to the imprecision of the oscillometric device when used with the small cuff size, which was discussed in the validation paper on the Omron 705IT [13]. The association between the large cuff size and the BP z scores may be explained as a physiological phenomenon of obesity-related elevated BP. However, the validation study of Omron 705IT did not include the large cuff size and only eleven out of 197 study participants were obese [13]. In this respect, validation of oscillometric BP devices in children is rare, and validation of subgroups such as obese children is even more seldom.

In the present study, each multiple regression model was constructed in order to control for growth measures, and BP was consistently associated with cuff size. Differences between SBP in mmHg and z scores may be explained by differences in the methodology of the BP measurements (including cuff sizes) with respect to the American standard population from where the BP z scores are calculated [9]. Furthermore, differences in AC may explain part of the varying influence of cuff size on BP in mmHg and z scores. However, the strong inter-relationship between the anthropometric measures complicates this evaluation.

The significant effect of cuff size on the BP in mmHg measurements has been discussed in previous papers. However, recommendations as to the most suitable cuff size are not consistent [8, 18, 19]. Recommendations apply to the conventional auscultatory methods, whereas less is known about cuff sizes and oscillometric devices [8].

The limitations of the present study include the relatively small sample size which limits detection of small BP differences. Each person’s BP was measured by only one cuff size. The study is therefore based on between-person comparisons rather than within-person comparisons using all available cuff sizes – which would be a superior design [20]. In this respect, the present study is a post hoc analysis of individuals using appropriate cuff sizes as recommended by the manufacturer, and the potential influence of cuff sizes on BP was investigated in the original study.

We found that cuff size had a significant impact on the BP measurement when obese children and adolescents were compared with an age- and gender-matched control group. Despite the influence of cuff size, BP in mmHg was higher in the obese group than in the control group. Our data indicate that a step function existed for the used oscillometric device as BP was over- and underestimated, respectively, in persons who had an AC size close to the switch from small to medium cuff size. This may be due to imprecision of the used oscillometric device when used with the small cuff size. In future studies focusing on BP differences between obese and normal-weight children, the effect of the cuff sizes on the result of BP measurement should be considered as a BP device may be imprecise at a given cuff size. 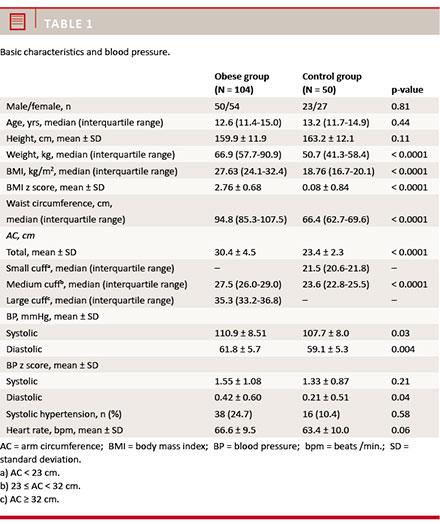 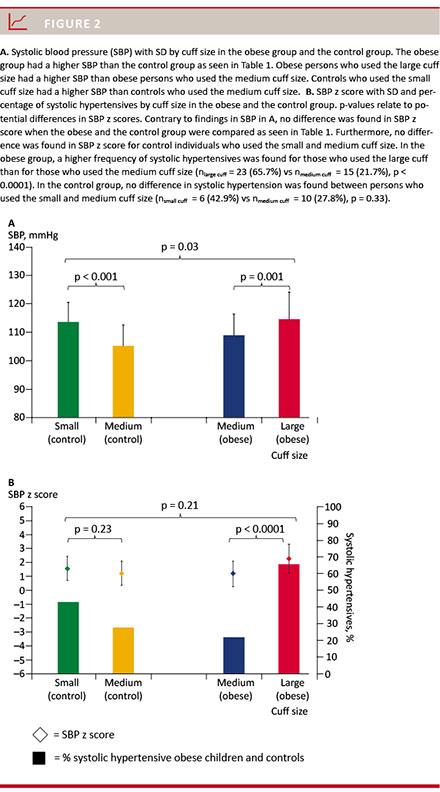