The conflict in Afghanistan has resulted in a new generation of combat survivors. For more than a decade, Denmark has had soldiers deployed to Afghanistan as part of the Global War on Terrorism. As of 2010, 43 soldiers have been killed in combat and 68 have been wounded and subsequently treated at Rigshospitalet (RH), with the majority of injuries occurring in the 2006-2010 period. Most of the injuries, primarily confined to the extremities [1], were caused by improvised explosive devices (IED) used by insurgents to attack coalition forces [2].

Advances in trauma management and prompt, efficient evacuations have improved the overall survival of injured soldiers [2, 3]. The development of improved body armour is likely to have reduced the mortality rates from injuries to the torso and vital organs that were otherwise fatal in previous conflicts [3]. The severity of the injuries seen places the injured combatants in a patient category out of the ordinary − a patient category not previously treated at Danish hospitals where ballistic trauma is a rare occurrence.

Definitive treatment involves a multidisciplinary approach combining the expertise of the orthopaedic and plastic surgery specialties to treat all associated injuries. Following serial irrigation and debridement to remove all necrotic and nonviable tissue, a coordinated plan is made for osseous stabilisation and soft-tissue coverage. In doing so, it is important to consider the risk of inducing secondary insults caused by early intervention in patients presenting with preoperative complications [4].

This paper outlines the approach taken by the Danish trauma surgeons in managing these reconstructive challenges and describes the lessons learned. The paper is the first of its kind describing the use of soft-tissue restoration by free flaps in Danish military war casualties along with a presentation of two cases.

A retrospective study was undertaken of nine soldiers who were wounded in Afghanistan and underwent free flap reconstruction at the RH. Their medical records were reviewed, and the following data were extracted: mechanism of injury, injuries treated, surgical treatment, time elapsed from injury to flap surgery, type of flap used for reconstruction, post-operative complications following reconstructive surgery, bacterial colonisation and outcome data. All patients were registered in a clinical quality database (“Mikrokirurgisk Database”) and approved by the Danish Data Protection Agency. Formal ethical approval was not required for this study according to Danish law.

The patients (n = 9) treated were all male soldiers with a mean age of 24.4 years (range: 21-34 years) injured in combat between 2008 and 2010. Six soldiers had injuries caused by explosive devices, while two had gunshot wounds (GSW). In one case, the mechanism of injury was unknown.

All patients suffered extremity fractures with considerable soft tissue injury (one type IIIa, seven type IIIb and one type IIIc fractures according to the Gustillo-Anderson Classification). Other associated injuries included perineal and genital wounds (n = 2), facial injuries with concomitant fractures (n = 2), and one case of penetrating thoracic trauma requiring lobectomy at the field hospital. Furthermore, four patients had amputations on admission or were already missing limbs as a result of traumatic amputation at the time of injury. One soldier suffered amputation of all four extremities as a result of an IED explosion. Despite extensive surgery, including microvascular reconstruction, the patient died due to progressive tissue necrosis and multiple organ failure (MOF). In total, 13 extremity amputations and 11 free flap procedures were performed (Table 1).

A multidisciplinary surgical team consisting of orthopaedic and reconstructive plastic surgeons simultaneously or sequentially treated all cases. Delayed microsurgical reconstruction was achieved in all patients. The most common reasons for delay to definitive soft-tissue coverage included control of wound hygiene (i.e. demarcation between viable and non-viable tissue) and multiple, concurrent injuries.

The average time from injury to reconstruction was 13.2 days (range: 5-48 days). The flaps used for reconstruction were as follows: two gracilis flaps, two fibula flaps, and seven latissimus dorsi flaps (in one case, a combined latissimus dorsi/thoracodorsal artery perforator flap) (Figure 1 and Figure 2). Complications included one case of partial flap necrosis in a fibula flap which was presumably due to leakage at the anastomotic site resulting in compression of the perforator vessels necessitating debridement. The osseous component of the flap remained viable and was covered by a free gracilis flap in a subsequent procedure. Another patient was amputated due to pain and decreased function of the reconstructed limb.

All but two patients had positive cultures on admission (78%), and 43% of these patients carried the multi-resistant bacteria Acinetobacter baumannii (Table 1). All patients received rehabilitation services following discharge from the inpatient unit, including prosthetic fitting with computerised legs (C-legs). The mean time of follow-up at the Department of Plastic Surgery was 26 months, ranging 6-53 months. One patient had a mental condition, presumable pre-existing, and withdrew from follow-up after six months. A total of three patients are still attending follow-up at different departments at the RH.

The mechanism of modern warfare injuries is different from that of civilian trauma. High-energy explosive blasts cause significant trauma including complex fractures with substantial bone and soft tissue loss. The management of these injuries poses a challenge for Danish surgeons who are not accustomed to treating war casualties. To overcome this, a multidisciplinary approach was employed to coordinate the planning of reconstructive procedures, facilitate patient recovery and optimise functional and aesthetic outcomes.

As of 2010, 68 soldiers have been wounded and treated at the RH. Nine of these patients underwent reconstructive procedures using free flaps.

The department of orthopaedics is the primary receiving unit for Danish military casualties. All wounds are re-evaluated upon arrival, and further debridement is performed as needed. In patients presenting with severe soft tissue injury, a plastic surgeon is consulted prior to or during the initial surgical procedures in order to evaluate and plan the most appropriate method for soft tissue restoration.

Planning the reconstructive procedures may be difficult due to unforeseen circumstances. Furthermore, assessment and preservation of viable tissue for subsequent procedures is imperative in order to optimise the surgical outcome, reduce the number of procedures and maintain function of the reconstructed part.

Microvascular free-tissue transfer is a safe and well-accepted reconstructive procedure for large composite defects. Compared with local flaps, free flaps provide adequate bulk, minimal donor-site morbidity and vascularity when the blood supply to the recipient bed is compromised. In addition, the use of microvascular free-tissue transfer allows for the selection of specific donor characteristics to fit the requirements of the recipient site.

The most favourable time for surgical intervention is a matter of opinion and is often discussed in relation to civilian trauma. There is evidence that early wound debridement and soft tissue coverage reduces the risk of flap failure, osteomyelitis and post-operative infection. Nonetheless, a number of studies have reported minimal risk of flap loss in addition to low infection rates following soft tissue coverage two weeks post-injury [5-11]. This is supported by a study by Kolker et al in which it was concluded that the timing of reconstruction had no influence on outcome [12].

Our results indicate that delayed reconstruction may be safely and reliably performed when the wound is adequately debrided and all devitalised tissue or tissue colonised by bacteria is removed. In our experience, this is possible up to one month after injury in the delayed period. Also, the surgeon must bear in mind the physical condition of the patient in order to avoid not only flap loss, but also the risk of MOF. The underlying pathophysiology of MOF is complex and remains incompletely understood. A “two hit” model has been proposed to account for the development of MOF in trauma patients. The traumatic insult (first hit) primes the inflammatory response and subsequent insults (second hits – surgery) may amplify the pre-existing inflammatory state sufficiently to induce delayed MOF [13]. Therefore, the timing of the surgical procedures needs to be considered carefully to minimise the risk of MOF. Combat-related trauma differs from civilian trauma in terms of the mechanism of injury (high-energy trauma causing severe and mutilating injuries), but also in terms of the uncommon bacterial contamination seen in these patients. Reconstructive surgery is often delayed due to co-morbidity and wound contamination. The multiresistant bacterium A. baumannii is of particular concern in these patients because it is able to survive on dry surfaces for prolonged periods in hospital environments, which increases its potential as a nosocomial agent [14]. Furthermore, A. baumannii isolates demonstrate increasing resistance to various antibiotics [15]. In our patients, the colonisation of A. baumannii upon arrival at the RH did not present a clinical problem.

Physical rehabilitation following reconstructive surgery poses a challenge to physiotherapists. The soldiers usually have expectations for recovery and rehabilitation that reach beyond the outcomes achieved by standard rehabilitation practices [16, 17]. Moreover, the use of standard prosthetics is generally inadequate to meet individual goals. This has necessitated the use of more advanced equipment such as computerised prosthetics. Examples include the aforementioned C-leg which is microprocessor-controlled hydrualic knee prosthesis for transfemoral or above-the-knee amputees. It allows the user to walk almost normally and to engage in everyday activities. Furthermore, it has been shown to decrease detrimental side effects relative to more conventional prostheses [18]. Other types of devices include myo-electrically controlled upper-limb prostheses such as the Cyberhand. These prostheses have a crucial limitation with respect to practical use in that only one function can be controlled at a time.

The treatment of war casualties has not only been a challenge to the trauma surgeons tasked with managing these devastating injuries, but also to Danish healthcare as a whole. This report is the first detailing the reconstructive procedures in soldiers treated by a multidisciplinary team at a Danish hospital. The outcome of multidisciplinary treatment is highly encouraging and has now been adopted as a standard procedure for severe traumas at the RH. The rate of complications observed was low when we chose the most optimal time point for surgery, and the aesthetic appearance of the reconstructed limbs and the functional recovery were satisfactory.

We therefore recommend the use of multidisciplinary teams and free flap procedures to reconstruct defects resulting from battlefield trauma. 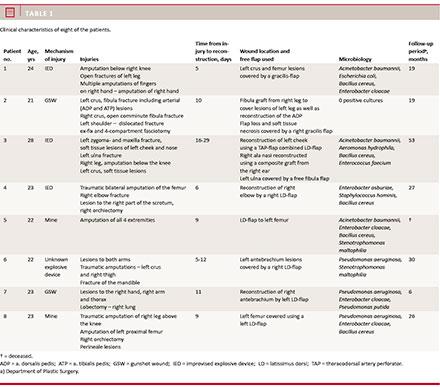 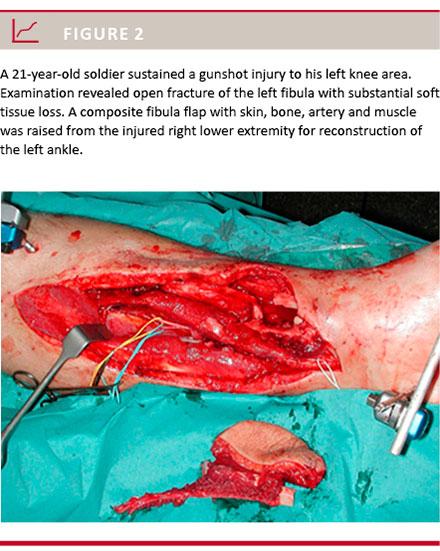 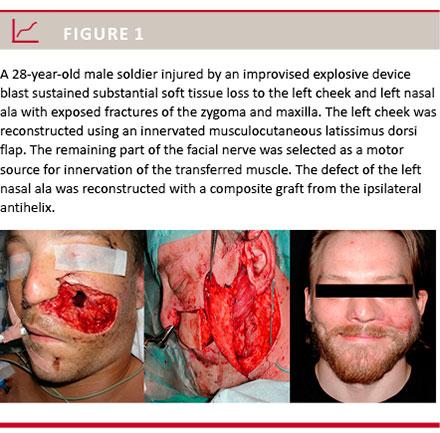