Childhood vaccination programmes have received broad international support over the past decades. Measles, mumps, and rubella (MMR) are among the most commonly included diseases, and they form part of all European childhood vaccination programmes [1]. All three diseases may cause severe illness; but measles, in particular, can be dangerous and is highly contagious [2]. Since 1987, children in Denmark have been offered MMR vaccinations, initially at 15 months and 12 years of age, and since 2008 at the age of 15 months (MMR1) and four years (MMR2), respectively [3].

MMR vaccinations have proven health benefits worldwide, and the World Health Organization (WHO) recommends two vaccinations against MMR and a minimum 95% coverage for both vaccinations to obtain herd immunity and prevent outbreaks [4]. However, according to official national data for 2015, MMR1 coverage in Denmark was only 88% and even lower for MMR2 [3], apparently leaving Denmark as one of the Western countries with the lowest coverage [1 ,3, 5].

Other Western countries also face challenges regarding insufficient MMR coverage [1, 6]. Former studies have attributed this to oversight or negative attitudes in parents towards the vaccinations [6-8]. These attitudes have been supported by an assumed correlation between MMR vaccination and severe illnesses such as autism and inflammatory bowel disease [9]. Nevertheless, this association has been rejected in later studies [10, 11].

We conducted a medical record audit of the MMR1 vaccination status in five general practices in the Central Denmark Region (CDR) in 2015. Surprisingly, only very few parents had refused to have their child vaccinated. The most prevalent reason for putative non-vaccination proved to be administrative errors in the registration procedure, which indicated that the coverage could be higher than reflected in the national estimates.

In Denmark like in several other European countries, administrative data are used to estimate the national vaccination coverage [12].

However, concerns have been raised about the

validity of such data [13, 14]. Therefore, the aim of the present study was 1) to estimate the MMR1 vaccination coverage based on medical record review of children with a negative vaccination status according to the register-based data and 2) to explore the reasons for any identified discrepancies.

The study was conducted in the CDR, which is one of five Danish regions. The CDR covers approximately 1.2 million inhabitants, 381 general practices and 836 general practitioners (GPs). The Danish general practice system is characterised by a list system; a typical GP has a list of approximately 1,600 persons; and GP remuneration is based on a mixed capitation and fee-for-service system [15]. All residents in Denmark are registered with a unique personal identification number (CPR number), which makes it possible to obtain accurate information about healthcare services provided for all Danish residents, including their vaccination status [16].

Until the end of 2015, the national vaccination coverage was based entirely on data from the Danish National Health Service Register [13, 17]. The GPs, who predominantly perform the vaccination of the children, provide these data by invoicing the regions with a unique code for each type of vaccination [13, 18].

On 31 May 2016, each participating practice received a registration form with a list of children aged 18-42 months from their practice who by 29 April 2016 had not received an MMR1 vaccination according to the register-based data. For each child, the GP recorded whether the child was: 1) vaccinated at own practice,

Also, we obtained information from the CDR about the participating and non-participating practices regarding the number of listed patients and listed children (18-42 months). From the official national health information website in Denmark, we extracted information about practice type.

Descriptive statistics were calculated along with exact binomial 95% confidence intervals (CI) for proportions in the two groups; register-based data and data from medical record review, respectively.

The participating practices had a total of 75,383 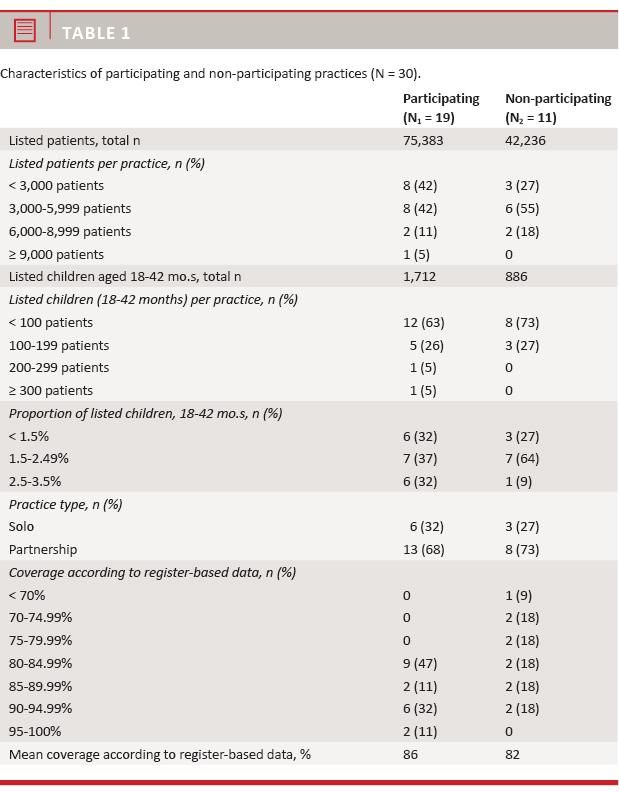 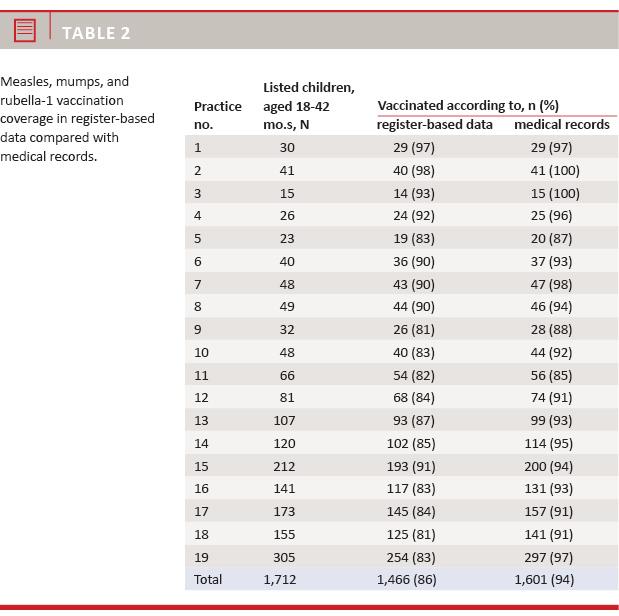 The main reason for this discrepancy appeared to be administrative errors in the registration procedure involving the general practice and the region (n = 89, 36%). In 62 of these 89 cases, the GPs stated the correct unique code for performing the MMR1 vaccination, but the invoices were rejected because of errors in the reimbursement request. In the remaining 27 cases, the GPs stated an incorrect unique code or forgot to forward the invoice to the region. The rest of the 135 children with negative vaccination status according to the register-based data, but with positive status according to the medical records, had been vaccinated elsewhere: at another general practice (9%), abroad (8%) or at a hospital (2%). Among the children registered as unvaccinated according to the register-based data, a total of 111 children (45%) were either truly unvaccinated or their vaccination status was uncertain according to the medical records (Table 3).

Conducting a medical record review in 19 randomly selected general practices with a total of 1,712 listed children aged 18-42 months, we found a significantly higher MMR1 vaccination coverage (94%) than estimated through register-based data (86%). This finding is surprising, particularly when considering that the official national vaccination figures are based on these register-based data merged with similar data from the four other regions. More than half of the children who were unvaccinated according to the register-based data (55%) had, in fact, been vaccinated according to the medical records.

Our study also revealed that the identified discrepancies between register-based data and medical records were due mainly to administrative errors in the registration system involving the general practice and the region. Most often, the GPs used the correct unique code for MMR1 vaccination, but administrative errors occurred in the reimbursement process and thus affected the register-based data.

The medical record review in our study was conducted only among children who were unvaccinated according to register-based data. We acknowledge that there is a potential risk of false-positive vaccination status of the children in the register-based data. However, this risk is expected to be low [19].

Until 15 November 2015, the Danish national MMR1 coverage was estimated solely on the basis of data in the Danish National Health Service Register. The register-based data used in our study were combined with equivalent information from the four other Danish regions. The validity of these data has been questioned elsewhere [13, 20]. In the future, the register-based data will be supplemented by data from an immunisation information system called the Danish Vaccination Register, and all doctors in Denmark are obliged to report any

given vaccination to this register [17]. Furthermore, parents also have the possibility of providing data about their child’s vaccinations [16]. However, the implementation of the new vaccination register has not yet been completed. The results from our study reveal a considerable underestimation in the regional data used in the Danish National Health Service Register. Once the Danish Vaccination Register is fully implemented, the official national coverage estimate is expected to improve, but misclassification due to both known and unknown factors may persist.

The use of ad hoc medical record reviews is a simple method to estimate misclassification. This approach also allows for adjustment of the register-based coverage estimate. A valid estimate of the MMR vaccination coverage is important; it may assist GPs in their communication with parents about vaccinations, but it may also help national health authorities in their prioritisation of the national public health campaigns.

The main reason why children were incorrectly recorded as unvaccinated in the register-based data was errors in the registration procedure involving the general practice and the region; incorrect recording was due primarily to rejection of incorrect invoices, although the GPs often used the correct unique code for the vaccination. The administrative structure of the remuneration and reimbursement system involving the GPs and the regions in Denmark is particularly complex when preventive services, such as vaccinations, occur simultaneously with other services. Therefore, an invoice for an MMR1 vaccination is accepted by the region only if the specific, unique code for MMR1 appears in a correct combination with certain other services [18]. If this is not the case, the invoice is rejected, and the child is thus registered as unvaccinated. Therefore, register-based data about other preventive services, including other vaccines, provided by GPs in Denmark are likely also

Internationally, national vaccination coverage is estimated by a broad variety of data sources [12]. In Denmark, Canada and other Western countries, data produced for administrative purposes are used [12-14]. A Canadian study explored the validity of infant immunisation billing codes and found an underestimation of the vaccination coverage, just as we did in our study [14]. This underscores the importance of validating coverage estimates based on administrative data, e.g. by supplementing with medical record reviews.

The MMR1 vaccination coverage in Denmark seems to be considerably higher than reported. The main reason for this discrepancy appears to be administrative errors related to reimbursement involving the GPs and the regions. The use of medical record review to assess vaccination status provided a valuable tool for identification of most of the supposedly unvaccinated children.

Conflicts of interest: none. Disclosure forms provided by the authors are available with the full text of this article at www.danmedj.dk