Dislocation is a well-known postoperative complication after total hip arthroplasty (THA) and it is associated with varying dislocation frequency as reported rates range from less than 1% up to 9% [1, 2]. Surgical factors such as acetabular component positioning, posterior soft tissue repair and combined anteversion technique of the acetabular and femoral components have been shown to play a role with respect to instability following primary THA [3-6] operated with a posterolateral approach.

In the late 1970s, Lewinnek et al [4] suggested a radiological “safe zone” (an inclination of 40 ± 10 degrees and anteversion of 15 ± 10 degrees) for positioning of the acetabular component in THA, within which the risk of dislocation could be reduced. In this often-cited study, the rate of dislocation was 1.5% for cups positioned within the defined “safe zone”, whereas the dislocation rate was 6.1% for cups placed outside the “safe zone”. In 2011, Callanan et al [7] proposed a modified “safe zone” that could minimize the dislocation rate, where the upper limit of inclination was reduced to 45 degrees in order to account for edge loading, which had been shown to occur in acetabular components placed at > 45 degrees of inclination [8]. Similarly, Barrack et al [9] defined an acceptable target range (inclination of

30-55 degrees and anteversion of 5-35 degrees) that showed an improved accuracy of component positioning. However, recent literature has questioned the association between these “safe zones” and minimising the risk of dislocation after THA [10]. In a recent retrospective study, Abdel et al [10] found that THAs performed through a posterior approach were three times more likely to be positioned within the “safe zone” than THAs performed through an anterolateral approach, even though a higher risk of dislocation was associated with a posterior approach than with an anterolateral approach. To our knowledge, hip surgeons’ opinions about cup positioning in primary THA have yet to be demonstrated in published literature.

Therefore, the purpose of this study is: 1) to determine if a general consensus exists among Danish hip surgeons regarding a specific “safe zone” for acetabular cup positioning and 2) to investigate hip surgeons’ surgical practice patterns concerning recurring instability in primary THA.

We performed a survey among hip surgeons who attended a meeting in the Society of Danish Hip and Knee Arthroplasty Surgeons during the 2015 Annual Meeting of the Danish Orthopaedic Society. The audience was introduced to the survey at the beginning of the meeting, and hip surgeons were invited to participate during the session by answering the questionnaire which had been handed out beforehand.

a few questions about the hip surgeons’ professional

Data gathered from the questionnaires were stored in an MS Excel spreadsheet. A p-value < 0.05 was considered statistically significant. All analyses were performed using SPSS statistics software (version 21, IBM).

Table 1 presents an overview of optimum, minimum and maximum accepted angles in inclination and anteversion for acetabular component positioning based on answers from the gathered questionnaires. 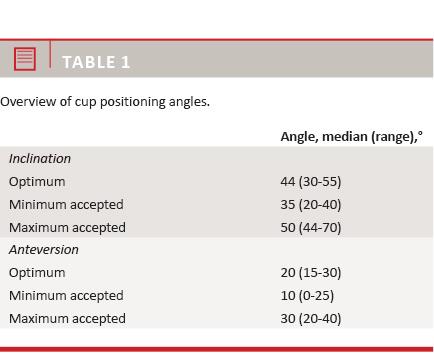 Scatter plots in Figure 1 show each surgeons’ response regarding anteversion and inclination angles compared with the widely accepted “safe zones” set by Lewinnek et al [4] and Callanan et al [7], respectively, as well as the target range established by Barrack et al [9]. A total of 97% of the surgeons stated optimum anteversion angles within both the Lewinnek and Callanan “safe zones”, whereas 97% of the respondents indicated optimum inclination angles within the Lewinnek “safe zone” and 83% fell within the “safe zone” set by Callanan (Figure 1).

The number of annually performed THAs for each surgeon varied from a minimum of zero to a maximum of 200 procedures, with an average of 92 THAs performed annually. A summary of the answers gathered from our survey in regard to operative practice patterns in primary THA is shown in Table 2.

Concerning surgical technique, one surgeon placed the femural component before inserting the acetabular component and did not use combined anteversion technique. The current practice pattern shows that 75% of the surgeons stated the use of anatomical landmarks when inserting the acetabular component, whereas 87% of the surgeons reported the use of posterior soft tissue repairs in the

majority of their operations.

Reoperation for dislocation was offered when a mean of 2.9 dislocations had occurred within one year, and when satisfactory component positioning on radiographs, restoration of leg length and off-set had been achieved. Questions regarding perioperative decisions with regard to hip instability are summarized in Table 3. 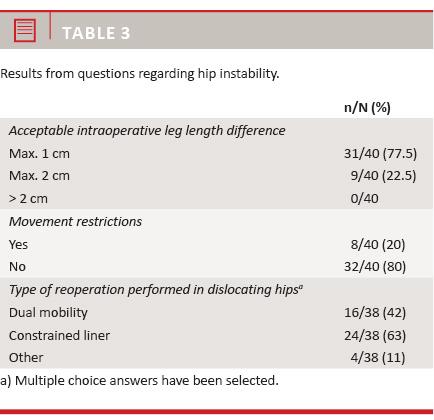 When reoperation is offered, 40% of the hip surgeons use dual mobility cups and 60% use constrained liners in revision THA. Out of the 40 hip surgeons who participated in the survey, only 20% advise movement restrictions to patients who have undergone surgery.

In a prospective study, Bosker et al [12] concluded that the surgeons’ estimation of cup positioning within the Lewinnek “safe zone” had an accuracy of 70.5%, which correlates with our main findings. In contrast, Callanan et al [7] found that only 47% of the cups in their study were positioned within both their own “safe zone” and the Lewinnek “safe zone”. Based on prospective surgeon consensus rather than literature exclusively, a target range was defined by Barrack et al [9], and 88% of the components in their study were positioned within their target range. Our findings that the majority of hip surgeons indicate that maximal and minimal acceptable inclination and anteversion of the acetabular component should be within the “safe zone” suggest that the surgeons set unrealistic goals for cup positioning, or at least goals that are difficult to achieve in a clinical setting. Cup malpositioning can lead to multiple complications [4, 8]. Consequently, as one third of the accepted safe zones are outside the Lewinnek “safe zone”, cup positioning here may compromise survival of the prosthesis due to wear, and a change in behaviour should be encouraged so that the accepted angles at least meet the Barrack target range. However, minimising the risk of dislocation after THA by positioning cups in “safe zones” has been questioned [10]. Lewinnek’s study [4] is based on a small population, and a recent systematic review [13] found that the Lewinnek “safe zone” was not justifiable as the zone was not associated with a statistically significant reduction of dislocations.

and restorations of leg length and off-set. Dual mobility cups have shown to be a valid option for hip instability yielding lower dislocation rates [19]. Recently, Jo et al reported that constrained liners can be helpful with re-

dislocations in revision THA, but also that this will not lower the rate of re-revisions [20]. There are several limitations to our study. As the total number of eligible respondents to this survey remains unknown, a low response rate could limit the survey‘s representativeness for all Danish hip surgeons, but it is estimated that the occasion in which the survey was performed is the single place where the highest number of active Danish hip surgeons have recently been gathered. While we did not specify the method of measurement of the acetabular component in the questionnaire, which would have been relevant, the measurement based on AP pelvic radiographs is most commonly used [13]. The findings above are useful for describing the current surgical practice patterns among hip surgeons and may help guide the interpretation of future studies.

There is a general consensus among Danish hip surgeons that optimum cup positioning lies within the Lewinnek or Callanan “safe zones”; however, there is no consensus on the exact optimal positioning of the acetabular component with respect to inclination and anteversion. This is in accordance with current evidence that strict usage of the Lewinnek “safe zone” cannot be justified. Current operative practice patterns among the majority of Danish hip surgeons were thus found to be supported by existing published literature.