The aims of the present study were twofold. First, we wanted to evaluate the outcome of anti-TNF treatment in a cohort of patients from clinical practice. Next, we wanted to establish a cohort for future studies on genetic variation associated with treatment response. Therefore, we established a clinically based cohort of previously naïve anti-TNF treated Danish patients with IBD from the 18 largest medical departments in Denmark.

Prior to anti-TNF therapy, routine screening for Mycobacterium tuberculosis infection was performed as the treatment may lead to activation of latent infection. Therefore, we collected the unique personal identification number of Danish citizens (the CPR number) from all patients who had a blood sample analysed for M. tuberculosis at Statens Serum Institut (SSI, Copenhagen, Denmark) from 01.09.2009 to 30.03.2011 and at the Department of Respiratory Diseases B and the Department of Clinical Microbiology, Aarhus University Hospital (Aarhus, Denmark) from 01.01.2011 to 30.03.2011. The CPR numbers were linked to The National Patient Registry, and we examined 1,378 patient records from patients with ICD-10 codes of K50-K63, which included intestinal diseases, from 18 medical departments.

Data were collected retrospectively from patient records. Data included information on disease (CD or UC), gender, year of birth, age at diagnosis, CD location and behaviour and UC distribution according to the Montreal classification, smoking status, the date of the first anti-TNF treatment (infliximab (Remicade; Centocor, Malvern, PA, USA) or adalimumab (Humira; Abbott Laboratories, North Chicago, IL, USA)), treatment indication, C-reactive protein (CRP), faecal-calprotectin (F-cal) and treatment efficacy (as described later). Furthermore, concomitant medication with azathioprine or methotrexate for up to 4 weeks and 5-aminosalicylates, intravenous or peroral glucocorticoids or antibiotics up to two weeks before the first infliximab or adalimumab treatment were registered.

Indication for treatment was: Patients with moderate or severe disease who did not respond to prednisolone or immunosuppressive treatment. Patients were routinely treated with 5 mg/kg infliximab intravenously starting at week 0, 2, 6 and every eight weeks thereafter. As a standard, adalimumab was administered with 160 mg subcutaneously in week 0, 80 mg in week 2, and 40 mg every second week thereafter [12, 13].

A chi-square test or unpaired t-test was used to test if there was a statistically significant difference in response between patients with CD and UC and to examine if there was a difference in secondary parameters between responders and non-responders. Statistical analyses were performed using STATA version 11 (STATA Corp., Texas, USA).

During the inclusion period, 10,425 blood samples from 9,217 individuals were collected as shown in Figure 1. From the medical departments, 1,519 patients had ICD-10 codes of K50-K63 and 1,378 (91%) patient records from 18 hospitals were examined. Among the examined 1,378 patient records, 1,095 patients with IBD were identified of whom 808 previously anti-TNF naïve patients were treated with infliximab or adalimumab. Forty-nine patients had to be excluded due to missing data.

Young age at treatment initiation was associated with a beneficial response among patients with CD, with a median age of 33 (13-80) and 40 (16-75) years among responders and non-responders, respectively (p = 0.03).

As shown in Table 2, 76 (10%) of the 759 patients treated with infliximab or adalimumab terminated the treatment because of adverse events. Treatment termination due to adverse events occurred in 10% and 9% of the patients with CD and UC, respectively, and in 9% and 11% of responders and non-responders, respectively.

The most severe adverse events were one case of serum sickness, one anaphylactic reaction and one case of cardiac failure. No deaths were reported.

The main result of the present study is that we achieved similar results in clinical practice as have been obtained in clinical trials with carefully selected patients [1-3]. Our results from the present large cohort support the previous findings of a high primary response rate in clinically based cohort studies [4-10]. Additionally, our findings of higher rates of non-response among patients with UC, among female patients with CD and among patients with CD smoking 10 or more cigarettes per day are in accordance with the results of previous, smaller studies [14, 15]. In addition, our findings that young age at treatment initiation was associated with a beneficial response among patients with CD and that a decrease of 25% or more of pre-treatment CRP or faecal-calprotectin levels was associated with a beneficial response are in accordance with the results of other studies [14, 16, 17]. The use of azathioprine and methotrexate has been associated with a beneficial response after short-term treatment and fewer infusion reactions among patients with CD and UC treated with anti-TNF [6, 14, 15]. We were unable to confirm this result, probably because of lack of power. The incidence of adverse events was in line with that reported in previous studies (Table 2) [1, 2]. Among patients with CD with fistulising disease, the response rate in our retrospective study, reflecting the best response within 22 weeks, was similar to the response rates reported in other prospective and retrospective studies [4-6, 11].

All in all, we found similar anti-TNF treatment results in this clinically based cohort as have been found in clinical trials and in the few previously published clinically based studies. The results indicate that this cohort may be used for future studies on genetic variation associated with treatment response [18-20]. Identification of clinically useful markers that may predict treatment response will help the clinician to stratify and thus select patients who will respond to anti-TNF therapy and to avoid treatment of patients who will not respond. Until now, biomarkers are used mainly in oncology for personalised therapy. Furthermore, knowledge on the underlying biological mechanisms may lead to the development of new, better targeted therapies.

The present study was a large nationwide Danish multicentre study of patients in clinical practice, including 759 previously anti-TNF naïve IBD patients. However, data were collected retrospectively and were not available for all patients, which prevented the calculation of a score, such as the Harvey-Bradshaw Index (HBI) or the Simple Clinical Colitis Activity Index (SCCAI), for determination of treatment response. Instead, the response was the best response within 22 weeks based on the physician’s global assessment which has also been used in other retrospective studies. In the light of the obtained p-values and the number of statistical tests performed, we cannot exclude that our positive findings may be due to chance. Nor can we exclude that associations were not identified due to insufficient power.

Acknowledgements: We thank Morten Frydenberg, Department of Biostatistics, University of Aarhus, Denmark, and Hans Jacob Rud Christensen, Data Management, Aarhus, Denmark, for advice and assistance and the staff at the Library at Viborg Regional Hospital for valuable help. 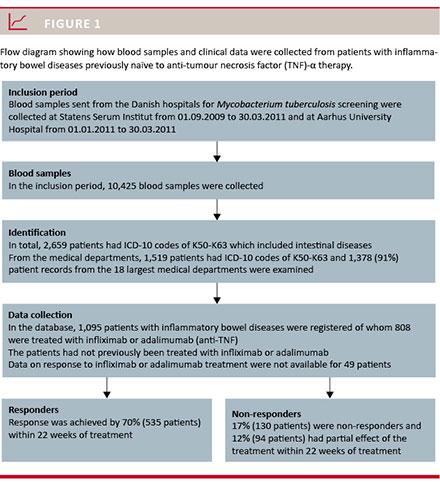 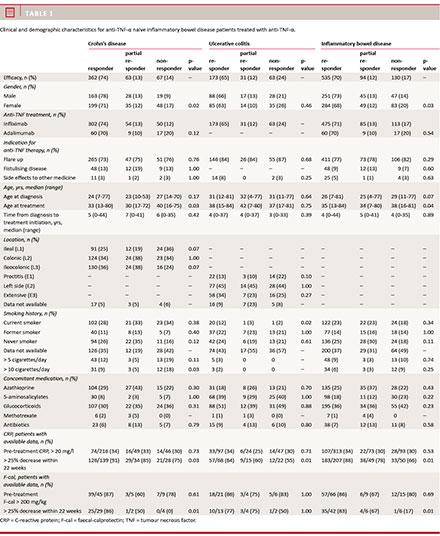