Evaluation of cervical lymphadenopathy in children: advantages and drawbacks of diagnostic methods

Cervical lymphadenopathy (LAP) in children is a common clinical diagnostic dilemma. The condition has multiple aetiologies, but the vast majority are caused by benign disease. However, since LAP can be the first symptom of an underlying malignant disease, it often causes concern [1-3].

The cervical region is the most common site for LAP [3]. Many methods are used to diagnose LAP, but the issue of how best to manage LAP in children remains unclear. Fine needle aspiration biopsy (FNA) is performed routinely in the evaluation of cervical LAP in the adult population. In the paediatric population, however, the use of FNA is not always used as a routine diagnostic procedure and it is not well-described in the literature [4-7]. In children with LAP, clinical symptoms, physical evaluation and ultrasonography (US) are often used for assessment. Surgical excision is the golden standard to diagnose malignancy in cervical LAP [8]. This procedure, however, requires general anaesthetics and involves a risk of nerve lesion, infection, haematoma and other operative complications.

The aim of our study was to analyse US, FNA, size and location on the neck to distinguish lymph nodes requiring excision from those that do not.

In this retrospective study, we studied patients who had excisional biopsies of cervical lymph nodes performed at the Ear, Nose & Throat (ENT) Department, Gentofte Hospital, Denmark, in the 2000-2010 period. All patients aged 0-16 years with cervical lymph nodes were included. Masses in the thyroid, thyroglossal cysts and branchial cleft cysts were excluded.

We studied the histology of the removed lymph nodes and compared results in terms of age, gender, observation time, presentation, location, chest X-ray and the clinical size of the nodes. Observation time is defined as the timespan in days from referral to the ENT department to surgery. Based on histology reports, we divided the patients into four groups: Reactive (I), malignant (II), granuloma (III) and other (IV). Furthermore, we compared the results with FNA and US findings.

If the ultrasonic description revealed a round shape, changes in the hilus, was inhomogeneous or referred as suspect for malignancy, we classified it as a suspected malignant diagnosis. The diagnosis was classified as suspected reactive if the LAP was described as a normally shaped and structured, but enlarged lymph node.

We used SPSS to analyse our data. Gender, FNA, presentation, localisation and ultrasound were calculated by Fischer’s exact test. The two sided t-test was used to compare age, observation time and tumour size with histology. A p-value below 0.05 was considered significant.

A total of 43 cervical lymph nodes were excised from 43 children from 2000 to 2010 at Gentofte Hospital, Denmark.

The distribution of the histopathological diagnosis is shown in Table 1. We found that the cause of LAP was of reactive origin in 30 patients (70%). Malignancy was the cause in five (12%) of the patients. All patients with malignancy had lymphoma. Granuloma was found in six (14%) of the lymph nodes that were surgically removed. In the lymph nodes containing granulomas, four were diagnosed with atypical mycobacteria. No cases of LAP were caused by Mycobacterium tuberculosis. One patient was diagnosed with Castleman disease and another with autoimmune lymphoproliferative disease. They were classified as Other.

Preoperative FNA was performed in 27 cases (63%). Five (19%) FNA results suggested malignancy and 18 (67%) reactive cause. We found that the positive predictive value for benign cause was 91.3%. The positive predictive value for malignancy was 75% (p = 0.01), showing one false negative and two false positive FNAs. One of the five patients with malignant diagnoses had no preoperative FNA (Table 1). No complications after FNA were noted.

A total of 18 (42%) children were examined with US before surgery. The US diagnosis was suspected malignant in five cases; however, four of these were false positive. Three of the histologically verified malignant lymph nodes were examined with preoperative US; two were false negatives and one was a true positive. Other diagnoses were granulomas, cysts and inconclusive diagnosis.

LAP presented unilaterally in 26 cases and bilaterally in 17. Unilateral or bilateral affection was not correlated with higher risk of malignancy.

Chest X-ray was only made in eight cases; we therefore excluded this diagnostic tool from further analysis.

To our knowledge, this is one of the largest studies comparing the use of FNA biopsy with excisional biopsy and US for cervical LAP in a paediatric population.

Though FNA was the best predictive diagnostic tool to predict malignancy, it rarely provided the final diagnosis in the present study. When lymphoma is suspected, an excisional biopsy remains necessary. However, when the FNA diagnosis is benign and this diagnosis is compatible with other clinical findings, the method can spare this group of patients for surgery. FNA is particularly suitable in suspected paediatric mycobacterial disease [9]. In line with other studies, we found no complications after FNA [1, 9]. Most studies of FNA in children are small, but generally supportive with respect to the use of FNA [4-7]. Although there are no complications to this method, one must consider that this method needs very good cooperation between the physician and the patient and the parents. Furthermore, it is painful and might be traumatizing for the child to undergo the procedure. The main disadvantage of FNA is the risk of false negative results. In our study, one patient, who was later diagnosed with lymphoma, had a false negative FNA.

The location of the LAP is important. We found that the risk for malignancy in patients with LAP in the supraclavicular region was higher than for patients with LAP in other cervical regions. This is consistent with other studies [3]. We found a benign aetiology in the supraclavicular region as well, both reactive and autoimmune lymphoproliferative disease.

Surprisingly, we found that US was not as good a prognostic procedure as we had expected. Contrary to other studies [10, 11], this method was not a good prognostic procedure in our study due to many false positive and negative results. A possible explanation for this finding is that the US was carried out by various physicians, some of them not specialised in US of the cervical area. During 2000-2010-period, US was carried out by radiologists at Gentofte Hospital and since then the ENT physicians have overtaken this area, but it is clear that more studies are needed on this matter.

In our study, girls were more often diagnosed with lymphoma than boys. This is in contrast to the normal pattern where more boys than girls under the age of ten have lymphoma [12]. Our small sample size may explain this unexpected finding.

LAP in children is a common cause for visiting the doctor. Knowing that the majority are of a benign nature and not wanting to overlook a possible life-threatening disease, the doctor therefore faces a difficult diagnostic dilemma, especially when the lymph node is not suspected to be malignant and where there are no obvious infectious signs. In these cases none of the prognostic tools are highly sensitive or good enough to use alone. The physician needs to be aware of the advantages and drawbacks of the diagnostic tools.

In conclusion, lymph nodes in the supraclavicular region should be considered for excisional biopsy due to a high risk of malignancy. In case of chronic LAP, which is not suspected to be malignant and where there is no obvious infectious cause, we recommend FNA as a diagnostic tool. We found that FNA is a useful tool with no reported complications; however, none of the diagnostic tools were good enough to be used alone, and we recommend excisional biopsy if the lymph node is suspected to be malignant. Furthermore, we recommend that clinical control and diagnosing of children with LAP lies in few, skilled hands capable of using the clinical information in conjunction with a variety of clinical tools to make a qualified diagnosis. We suggest a multidisciplinary team with specialists in paediatrics, ENT, infectious diseases and radiology. 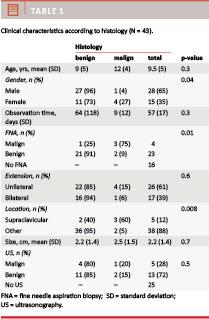 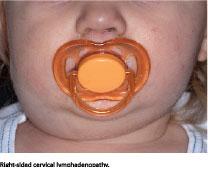