Evaluation of the diagnostic process in neonates with conjugated hyperbilirubinaemia

Biliary atresia (BA) is a rare paediatric disease that affects approximately 1:15,000 in Denmark. It is a disease of unknown aetiology and the primary indication for liver transplantation in children [1, 2].

Typically, the infant with BA presents with prolonged jaundice and pale stools because of periductal inflammation and obstruction of the extra-hepatic bile ducts, which compromises the flow of bile to the intestines. After glucoronidation in the liver cell, the conjugated bilirubin (CB) leaks into the blood stream while the lack of drainage induces progressive liver fibrosis and liver failure. An early diagnosis is essential for a successful hepatic porto-enterostomy (Kasai operation), which has the most favourable outcome when performed between day 30 and 60 after birth [2-4]. The Kasai operation is not always curative for BA as approximately 60% require a liver transplant later in life. Thus, a short delay from diagnosis to Kasai operation will postpone the need for a liver transplant [4].

However, early diagnosis of BA is difficult because infants with BA generally appear healthy during the first weeks of life. Physiological jaundice is very frequent in new-born infants, but when it is prolonged it is critical to distinguish cholestasis from non-cholestatic conditions [5, 6].

In 2003, the Danish Health Authority (DHA) announced that infants with BA should be diagnosed at an early stage to ensure that a Kasai operation was performed before eight weeks of age [5]. Thus, all infants with visible jaundice at the age of 14 days (21 days if premature) should be investigated for total and conjugated se-bilirubin. Conjugated hyperbilirubinaemia was defined as a CB concentration ≥ 20 μmol/l or a conjugated fraction ≥ 20% of total se-bilirubin. Infants with high levels should be referred to hospital for hepatobiliary iminodiacetic acid (HIDA) scintigraphy and abdominal ultrasonography (AUS) [5].

Based on recommendations from North American and European Societies [6], the Danish Paediatric Society (DPS) abandoned the conjugated fraction of total bilirubin (≥ 20%) and introduced a lower CB threshold of 17 μmol/l in a new guideline from 2017 [7]. Although the North American Society for Pediatric Gastroenterology, Hepatology, and Nutrition (NASPGHAN)/the European Society for Pediatric Gastroenterology, Hepatology, and Nutrition (ESPGHAN) guideline advocated consultation with a paediatric hepatologist before further investigations, the Danish guideline proceeded to an urgent HIDA scintigraphy without attention to other test results [6, 7].

The DPS guideline was not solely directed at identifying infants with BA but also aimed to disclose other causes of conjugated hyperbilirubinaemia. Thus, if the infant had a second test with a CB concentration ≥ 17 μmol/l, the following procedures and blood tests should be considered: a HIDA scintigraphy, an AUS, measurement of circulating levels of alanine aminotransferase, gamma glutamyl transferase (GGT), C-reactive protein, thyroid-stimulating hormone, ferritin, glucose, alpha-1-antitrypsin and urine analysis for cytomegalovirus and for a metabolic screen test [7].

This cross-sectional study aimed to evaluate the diagnostic process for infants with conjugated hyperbilirubinaemia over a five-year period with special focus on infants with a diagnosis of BA or other hepatobiliary diseases.

The investigation comprised infants born in the central part of Jutland (the Central Denmark Region), Denmark between February 2016 and January 2021. Infants were included if they had a blood test with a CB concentration ≥ 17 μmol/l at a postnatal age of 14-35 days.

A request was sent to the Department of Clinical Biochemistry for the identification of all infants meeting the study criteria. Data on personal identification number (CPR), age at testing and total and conjugated serum bilirubin were obtained for each infant from the database (Labka).

The study was classified as a quality control testing of the DPS guideline and was approved by the Institutional Review Board at all hospitals in the Central Denmark Region.

The personal identification number gave access to the medical record and the results of any HIDA scintigraphy, AUS, liver biopsy and other diagnostic tests. Furthermore, the underlying cause of cholestasis was documented, if present.

Personal identification numbers were used exclusively to gain access to the medical records and all data were analysed anonymously.

The analysis of CB was performed at the biochemical departments of Aarhus University Hospital (AUH), Herning Hospital and Viborg Hospital with the direct bilirubin technique, the Diazo method [8, 9]. Samples from hospitals in Randers and Horsens were analysed at the AUH.

Descriptive analysis and summary of data are presented as mean values and ranges of CB concentration, age and number of tests. HIDA scintigraphy, AUS and liver biopsies were counted. Any difference in the proportions of HIDA scintigraphies and AUS over the period was tested by the χ2-test.

All calculations were done using Stata 16 (StataCorp, Texas) or Excel version 16 (Microsoft Office). The level of significance was set to 0.05.

Considerable variation was recorded in postnatal age at the first CB measurement (Figure 1), but most measurements were obtained at an early stage with a mean age of 18.6 days (standard deviation: ± 4.6 days). 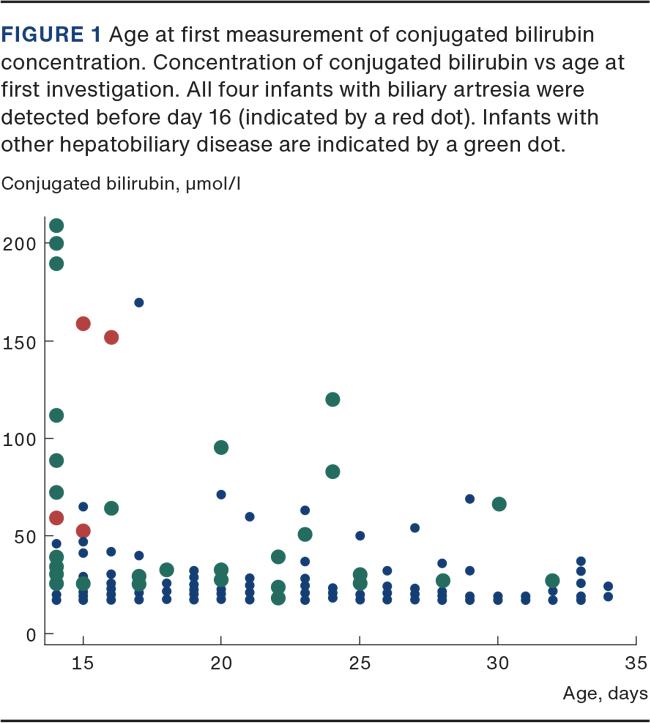 A total of 134 infants had a HIDA scintigraphy, whereas an AUS was performed in 151 infants. The proportion of both investigations did not differ significantly among infants over the five years. A HIDA scintigraphy with abolished bile drainage to the intestines was demonstrated in five infants: four with BA and one with bile stones in the common bile duct. The remaining 129 HIDA scintigraphies showed intestinal bile outflow (Table 1). 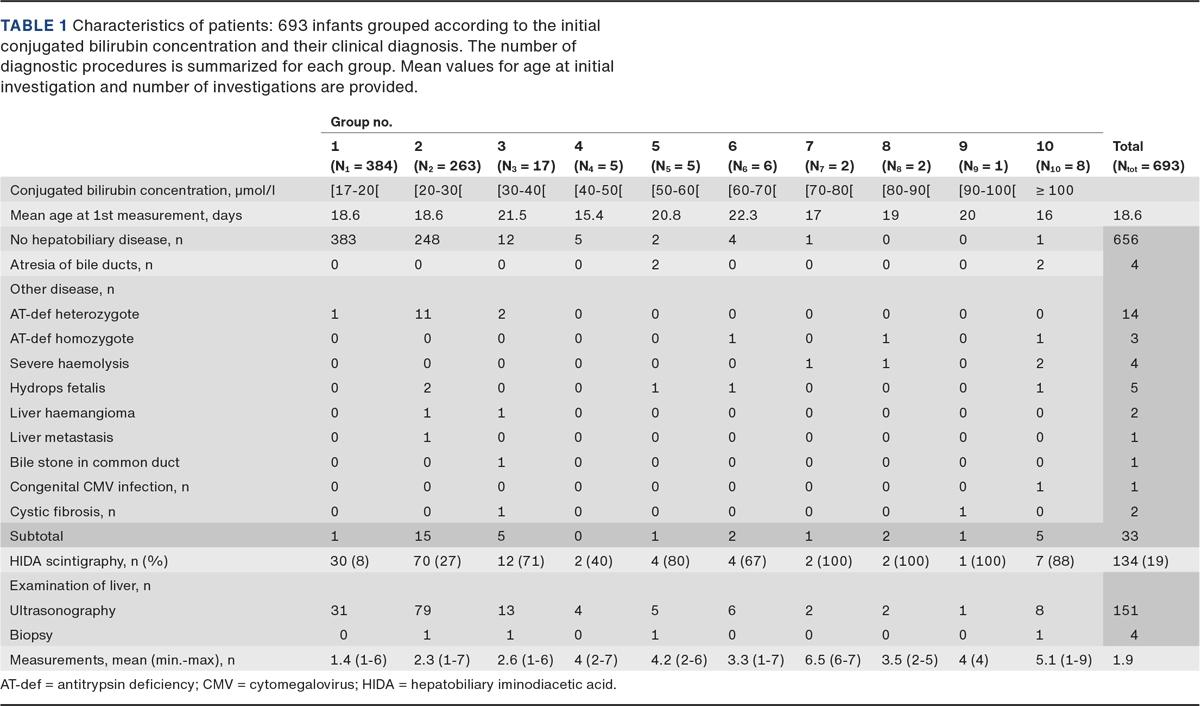 The infants were grouped by clinical diagnosis: four infants had BA, whereas cholestasis was caused by other identifiable disorders in 33 infants (inspissated bile syndrome secondary to severe haemolysis, hydrops fetalis, liver tumour, bile stone, cystic fibrosis, alfa-1-antitrypsin deficiency and cytomegalovirus infection). Six infants died due to multi-organ failure, whereas 650 infants recovered spontaneously before any diagnosis was made (Figure 2 and Table 1). 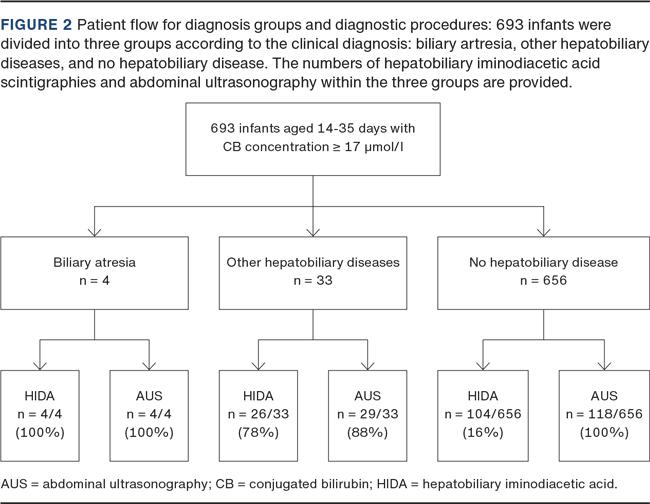 The initial CB concentration was below 30 μmol/l in 647 infants; 100 had a normal HIDA scintigraphy, whereas an AUS of the liver disclosed a liver tumour in one of 110 investigations (Table 1).

Twelve infants were diagnosed with alfa-1-antitrypsin deficiency, whereas another two infants had hydrops fetalis of unknown aetiology (Table 1).

In this cross-sectional study of 14-35-day-old infants, we identified 693 individuals with a CB concentration at or above the Danish national cut-off limit of 17 μmol/l. In total, 134 HIDA scintigraphies and 151 ultrasound examinations were performed, leading to the diagnosis of four infants with BA and one infant with bile stones in the common bile duct. AUS was diagnostically informative in five infants with hydrops fetalis, liver tumours and bile stone.

In screening programmes, cut-off levels are selected carefully to distinguish properly between individuals who are healthy and at risk of disease. Tests with a high specificity should be applied to minimise over investigation of healthy individuals. In the present study, 647 infants had a CB concentration < 30 μmol/l, none of whom had BA. Nevertheless, 100 HIDA scintigraphies were performed in these infants and all revealed bile flow to the intestine. Besides, 108 infants had a normal AUS of the liver, whereas a haemangioma and metastases from a neuroblastoma were revealed in two infants. Our findings indicate over-investigation of healthy infants resulting in false positive test results and point towards a need for reconsidering the cut-off level for CB concentration for making a HIDA scintigraphy. Support for a higher threshold has been provided in recent studies.

Madsen et al. conducted a retrospective analysis of 73 infants referred to the Copenhagen University Hospital (Rigshospitalet), Denmark with BA from 1993 to 2012. At referral, these infants had a mean CB level of 129.7 μmol/l (range: 42-334 μmol/l) [2]. A UK study of 460 healthy infants also supported a CB cut-off level of 25 μmol/l, which roughly corresponds to the 95thpercentile between day 14 and 35 [10]. Furthermore, the National Institute of Health and Care Excellence (NICE) guideance recommends a cut-off level of 25 μmol/l and the above-mentioned UK study supported this guideline and even proposed that a more stringent (higher) cut-off level may be considered [11]. Similar suggestions come from Canada, stating that a CB threshold limit of 2.5 mg/dl (≈ 42.7 μmol/l) may be relevant for further investigations of cost-effective analyses and diagnostic accuracy [10, 12].

The present study used the diazo method for CB measurements, and data therefore include the sum of bilirubin glucuronides and delta-bilirubin. Apparently, 25% of healthy infants who are visibly jaundiced at 14 days have CB levels above 20 μmol/l when CB is measured by the diazo method [10].

A new high-performance liquid chromatography method was established at Aalborg University Hospital, the North Denmark Region. The method separates bilirubin glucuronides and delta-bilirubin, and may help the clinicians in the diagnostic evaluation of infants with prolonged jaundice [14].

There are major interlaboratory differences in the measurement of both total bilirubin and CB because of the calibration of sensitive equipment, which influences the accuracy of bilirubin measurements. This general inaccuracy in measurements will unavoidably influence the decision as to whether or not an infant should be evaluated further [14].

Fourteen infants were found to be heterozygote for alfa-1-antitrypsin deficiency. At present no therapeutic interventions are available, and these infants should not take any special lifestyle precautions except to avoid smoking. Cystic fibrosis should be detected at an early stage, but this diagnosis is currently being identified from the national dried blood-spot screening programme. Other rare neonatal cholestatic conditions, such as progressive familial intrahepatic cholestasis and bile acid synthesis defects, were not demonstrated among our infants.

The current guidelines from the NASPGHAN, ESPGHAN, DHA and DPS chose a CB threshold limit of ≥ 17 μmol/l after having considered errors in CB measurements due to delta-bilirubin [5-7]. Apparently, this threshold limit detects all infants with BA, although one case with a CB concentration < 17 μmol/l may theoretically have escaped from this study. However, this approach leads to over-investigation and high expenses for a governement-funded healthcare system.

This study has a limitation as it did not include GGT and other liver parameters in the results. GGT may be elevated in infants with BA, and the combination of GGT and CB may possibly improve the selection of infants in whom a HIDA scintigraphy should be performed [6].

Other screening tools including use of the stool-colour chart and a two-stage CB testing strategy have been effective in shortening the time to Kasai operation and have thereby enhanced long-term survival [1, 3]. The stool-colour chart is comprised by the current DPS guideline [7].

This study investigated the number of infants with BA and other cholestasis-related diseases who underwent diagnostic evaluations because of prolonged jaundice and a CB concentration ≥ 17 μmol/l. Four infants were identified with BA, whereas another 33 infants had a diagnosis related to cholestasis. The group of “No hepatobiliary disease” infants with transient hyperbilirubinaemia comprised 656 infants, 16% of whom has had a HIDA scintigraphy during their diagnostic evaluation. Further research is needed to determine if the threshold may be increased without influencing the diagnostic accuracy of BA.

Correspondence Ida Borreby Pedersen. E-mail: idaborreby@hotmail.comAccepted 11 January 2022Conflicts of interest Potential conflicts of interest have been declared. Disclosure forms provided by the authors are available with the article at ugeskriftet.dk/dmjAcknowledgements The authors take this opportunity to express their gratitide to Jacob Würtz, Randers Regional Hospital, and Christian Gundersen, Aarhus University Hospital, for assisting with data extraction.Kun hvis den medtages på tryk:References can be found with the article at ugeskriftet.dk/dmjCite this as Dan Med J 2022;69(3):A08210650