Excess mortality during the first year after arterial trauma

The epidemiology of vascular traumas in Denmark is unknown. According to studies from outside of Scandinavia, vascular traumas were present in 0.4-4.4% of all traumas treated in trauma centres [1, 2]. Most studies of arterial traumas originate from war zones or urban areas, where gunshot wounds represent the most common cause of arterial trauma [2-4]. Most likely, gunshot wounds are the cause of very few arterial traumas in Denmark, but – to our knowledge – no data are available to describe this further. At our institution, trauma resulting from gunshots accounts for approximately 0.02% of all traumas managed [5]. We do not know the demographics of the patients with arterial trauma or the involved trauma mechanisms. These factors may affect the long-term mortality of patients, an aspect that very few international studies have investigated [6, 7]. The aims of this study were to describe the causes of arterial trauma and the clinical characteristics and long-term mortality of patients receiving or intended to receive vascular reconstructive surgery in Odense University Hospital, Denmark, in the 1990-2012-period.

This was a historical cohort study investigating all arterial traumas that required vascular intervention at Odense University Hospital, Denmark, in the 1990-2012-period. The unique Personal Identification Number (PIN) of patients with vascular trauma was extracted from the Danish Vascular Registry, a database that has existed since 1989 and is run by the vascular surgical centres across Denmark. The overall completeness of the data in the registry is 84.7% [8]. The pool of PIN numbers was supplemented and cross-checked by data on vascular injury from the Accident Analysis Group, a registry of accidents kept in the Emergency Department at the University Hospital of Odense. No further analysis of the cross check was made. Demographics and trauma mechanisms used in the study were extracted manually from electronic medical records (E-journal, COSMIC, OnBase). Arterial traumas were manually grouped according to anatomical locations. Dates of death were extracted from the National Civil Registration System (CPR). The inclusion criteria were: arterial trauma requiring vascular intervention in patients treated at Odense University Hospital 01.01.1990-21.06.2012. We searched for the index word: “trauma” in The Danish Vascular Registry and manually identified arterial trauma. The exclusion criteria were: Patients with lesions not requiring reconstructive surgery or ligation/coiling, missing clinical data, non-Danish PIN number in the National Civil Registration System, entirely venous traumas, intracranial vascular lesions and death before treatment could be initiated.

Using mortality data from the Danish population published by Statistics Denmark, we were able for each case to estimate the expected survival, taking into consideration age (1-year intervals), gender, calendar year of accident and length of follow-up interval. On this basis, the observed mortality was compared with expected mortality, and Kaplan-Meier plots of the survival in the patients were compared with expected survival.

Trial registration: not relevant. The study was approved by the Danish Data Protection Agency on 14 June 2013.

The main cause of arterial trauma was traffic accidents (40%), which were either motorised (cars: 18%, motorcycles/mopeds: 15%) or non-motorised (pedestrians, bicycles: 7%). Violence (assault, stabbings and gunshots) only accounted for 4% of arterial traumas. No arterial trauma was caused by gunshots in this series. Other causes of arterial trauma in the study population are presented in Table 1. Vascular trauma mainly afflicted the extremities, the upper extremities being more common (35.5%) than the lower extremities (25.4%). Injuries to the thorax and abdomen (37.7%) were also frequent; contrary to this, head and neck injuries (1.4%) were rare. The distribution by cause of trauma differed statistically significantly between males and females (chi-square value: 31.69, degrees of freedom (DF) = 6, p< 0.0001).

As shown by the Kaplan-Meier analysis in Figure 1, the mortality rate was highest within the first month after the initial trauma, resulting in 24 (10.4%) deaths in the 231 patients. In concordance with Figure 1, Figure 2). This is not the case when the results of patients without reconstructive surgery are analysed separately (Table 2).

Our study showed that traffic was the main cause of arterial trauma, which was mainly inflicted on younger men. The percentage of male patients was not as predominant in our study as in many other studies in the field [1-4], but it was comparable to the non-iatrogenic injuries reported in Rudström et al [7]. The differences may be explained by the different distribution of causes found in our study. Traffic was the leading cause of arterial trauma; and unlike other studies, violence, including gunshot wounds, was the least frequent cause. The survival analysis showed a significantly higher mortality rate in patients with arterial trauma than in the general Danish population. The overall mortality rate remained significantly higher the first year after arterial trauma; but it remained significantly higher at 1-5 years only in the subgroup of patients who had reconstructive surgery. This result may be explained by the effect of excluding patients not receiving reconstructive surgery, as they may represent both the patients with heavier and lighter traumas than the group of patients with reconstructive surgery. This leads to an excess mortality in the first period after trauma, but leaves the patients with lighter traumas to dilute the effect on survival the following years.

The endovascular methods of treatment have evolved significantly over the past decades. These new treatments may carry a lower risk of post-operative mortality than open surgery; a factor we did not consider and that may have had an effect on our results. The excess mortality observed in our study may decrease with these refined methods of treatment.

The method used in this study contains certain weaknesses and strengths. Manually retrieving information about causes of trauma and other descriptive information from medical records may lead to misclassification and thereby bias. The list of social security numbers drawn from the Danish Vascular Registry may not be complete as entry of patients into the database is performed by the individual surgeons. We tried to minimise this bias by cross-checking our findings with vascular surgery data registered by the Accident Analysis Group. In the Danish Vascular Registry, it is up to the individual surgeon to assess whether a patient can be classified as a vascular trauma patient in the registry. No clear definition is provided by the Registry. For instance, vascular injury in patients undergoing percutaneous cardiac intervention or coronary arteriography was not coded as vascular trauma in the registry. This may explain the suspiciously few iatrogenic vascular traumas in the present study compared with a similar Swedish national study by Rudström et al [7]. Injury to smaller abdominal arteries may be underrepresented as well, because abdominal surgeons treat these lesions themselves. Injuries to the aorta and greater vessels, i.e. iliac vessels, are still represented. The Danish Vascular Registry was founded in 1989, and our study runs from 1990 and onwards. As mentioned before, the Registry is not absolutely complete, and there is a risk of lost or missing data. This may lead to biased results if the patients not entered into the registry have certain traits that are not found in the study population. In the present study, it was not possible to retrieve information about the cause of death, and any explanation for the excess mortality seen is therefore speculative.

The study gains strength from utilising the possibilities of record linkage between a nationwide health register by means of the unique PIN assigned to each Danish citizen. This makes follow-up in terms of observed and expected mortality in the study population valid and practically 100% complete. Furthermore, by drawing mortality rates from the individual years of trauma for each patient, it was taken into account that the life expectancy in the general population increases over time. The calculation of expected mortality rates in the background population with the same age, sex and year is therefore accurate.

Rate ratios of mortality within the first 30 days after trauma cannot be calculated in a meaningful manner because virtually no deaths are expected from the general population during such a short time-span. The reason these patients have a higher mortality than the background population is unknown. Possible explanations for the higher mortality rate could be the trauma, the treatment or the behaviour of patients with arterial trauma. To further elucidate the reasons explaining the excess mortality in these patients, future studies could involve detailed information of the trauma and the treatment offered as well as long-term clinical assessments after discharge from the hospital.

There is a possibility of a profile of high-risk behaviour in the group of patients with arterial trauma. Such behaviour might have led to the arterial trauma in the first place. Risk behaviour such as driving under the influence of alcohol or drugs, attempting suicide or dangerous work habits/conditions may lead to premature death. Our study did not investigate the cause of death of the patients with arterial trauma. A large Australian study showed that a considerable percentage of patients with arterial trauma were under the influence of drugs or alcohol within 12 hours of their trauma [9]. We need more studies investigating alcohol and smoking habits, drug-abuse, visits to the emergency department, co-morbidities in general and cause of death to shed light on this subject and to investigate the effect of confounders. This may give some idea of the trend towards risk behaviour, a measure which is difficult to define and detect. All of this has been initiated in a Danish national study.

Acknowledgements: We would like to extend our gratitude to the Accident Analysis Group (Ulykkesanalysegruppen), Odense Universitetshospital, for providing supplemental data. 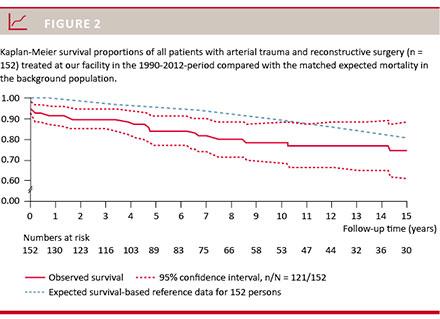 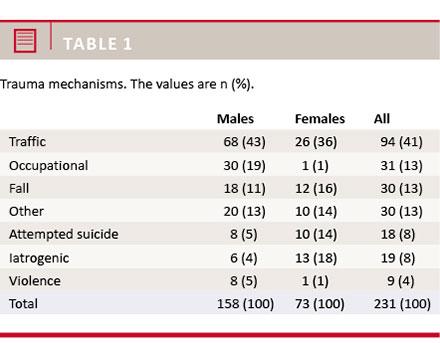 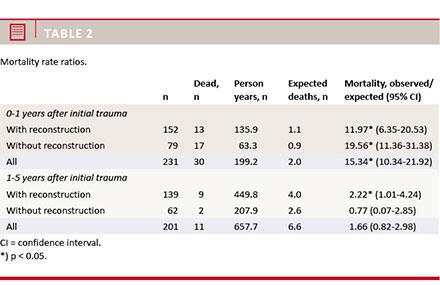 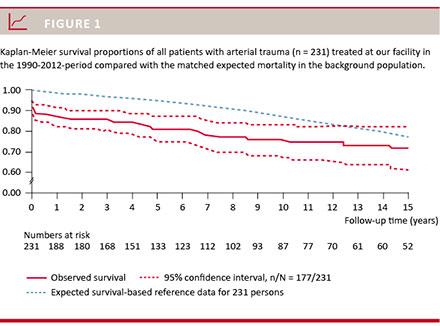