Migraine is a common headache disorder and a leading cause of disability [1]. Furthermore, migraine is associated with increased healthcare expenses and loss of productivity [2]. The condition is mainly episodic with sporadic attacks, but 2.5% of episodic migraine patients progress to a chronic form with ≥ 15 headache days per month [3, 4]. The prevalence of chronic migraine is approximately 1% of the general population [5] .

Preventive treatment (PT) is recommended when migraine attacks are frequent (≥ 4 migraine days per month). The most used drugs (beta-blockers, calcium antagonists, angiotensin-II-receptor antagonists and anti-epileptic drugs) are often associated with unwanted and non-tolerable side effects leading to discontinuation [6]. Recently, newly developed monoclonal antibodies (mAbs) against the neuropeptide calcitonin gene-related peptide (CGRP) have been shown to be efficacious and well tolerated in preventing episodic and chronic migraine [7-9]. As these new treatments are expensive, their use is restricted and in Denmark only patients with chronic migraine, without medication-overuse-headache (MOH), who have failed two different types of PTs are eligible for treatment with anti-CGRP mAbs. The aim of this study was to describe the treatment status and impact of migraine in a selected cohort of patients with ≥ 4 migraine days per month (MMDs) who may be eligible for treatment with anti-CGRP mAbs.

The My Migraine Voice study, sponsored by the Novartis Pharmaceutical Corporation, was conducted as a large, cross-sectional, multi-country online survey of adults (≥ 18 years) with migraine. The data presented here stem from the 306 Danish respondents. The full description of the applied methods has been published elsewhere [10]. Briefly, the survey was initiated with screening questions about the quality of headaches to ensure that respondents meet the International Classification of Headache Disorders third edition (ICHD-3) for migraine [3]. Only patients reporting ≥ 4 MMDs in the previous three months were eligible for inclusion. Pre-specified quotas were applied in the main study so that 90% reported current or previous use of PT, leaving 10% treatment naïve. Furthermore, of the 90% with a reported use of PT, 80% had changed their PTs. The applied quotas were set globally and thus not reflected in the country-specific data.

Study participants were recruited through advertisement via patient organisations for people with migraine and via existing online panels (GfK Health). All participants gave their consent prior to initiation of the study and completed the survey independently. All data were handled confidentially, and patient anonymity was maintained throughout the study.

The survey content was determined by a steering committee comprising headache specialists, a specialised nurse and representatives from patient organisations. The survey consisted of 88 questions including country-specific questions reflecting the differences in treatment possibilities and healthcare systems. The survey was divided into six sections:sociodemographic characteristics, headache and medical history, quality of life, impact on daily life, healthcare utilisation and headache treatment history. This article presents only part of the data. The complete data from the main study have been published elsewhere [10].

Descriptive data are presented with medians and interquartile ranges (IQR) or means and standard deviations (SD), depending on the distribution of the data. Normality was determined by the D’Agostino & Pearson test. Data analyses were performed using GraphPad Prism 7.02. 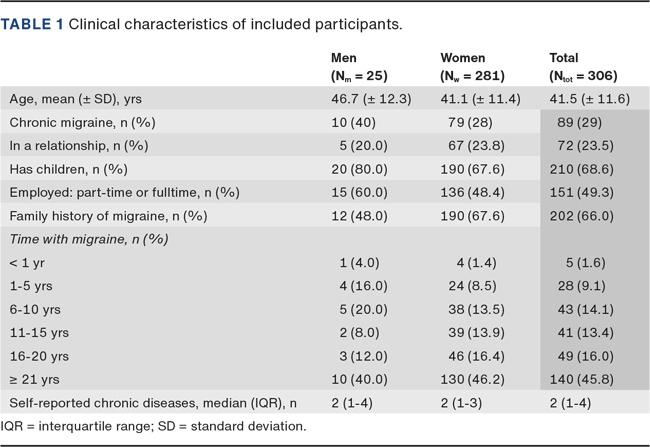 Diagnosis, treatment and use of healthcare services

Most patients (n = 276; 90.2%) were diagnosed by a doctor and in just over half the cases by a general practitioner (GP). Among those, 194 (70.3%) were diagnosed within one year after a median of three consultations. Within the past six months, 150 (49.0%) patients had consulted their GP due to migraine with a total of 388 visits. The number of patients consulting with other healthcare professionals within the past 6 months included: neurologist 72 (23.5%), headache specialist 58 (19.0%), physiotherapist 56 (18.3%), chiropractor 40 (13.1%) and nurse 29 (9.5%). Less frequently, patients reported having consulted dentists, psychiatrists or other mental healthcare professionals, pharmacists, occupational therapists, rheumatologists and oto-rhino-laryngologists. Detailed information about the diagnostic process and treatment status is shown in Table 2.

Less than half of the patients (n = 137; 44.8%) had been investigated with computed tomography or magnetic resonance imaging, and 65 (47.4%) of these had been scanned more than once. Of all patients, 60 (19.6%) had been admitted to the hospital or treated in the emergency department due to migraine within the past year. 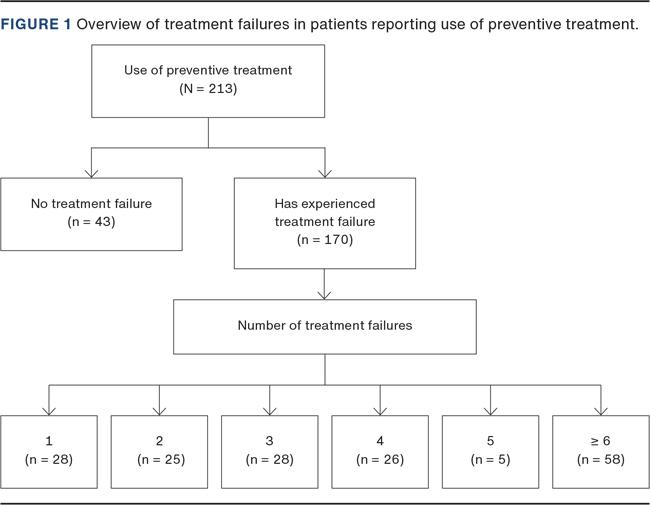 The figure has been edited on 2 November 2021

Most patients (n= 265; 86.6%) reported current or previous use of abortive treatment (AT), most commonly analgesics or triptans. In total, 70 (26.4%) of these patients reported that they were either dissatisfied or mostly dissatisfied with their AT (Table 2).

Living with migraine - impact on private, social and professional life

A negative impact of migraine on either private, social or professional life was reported by 303 (99.0%) of all patients; and among these, 195 (64.4%) reported an impact in all three domains. Most patients (n = 261; 85.3%) reported spending long periods in darkness or isolated due to migraine, on average 27.6 (SD: ± 26.7) hours in the preceding month. Additionally, 261 (85.3%) of the patients reported that their migraines caused sleep difficulties to a varying degree, 273 (89.2%) reported living in fear of the next migraine attack.

Overall, 244 (79.9%) of the patients reported that migraine had affected their professional life. The current occupational status of the respondents and details of the reported impacts of professional life are summarised in Table 3. A total of 34 (11.1%) respondents reported that they receive disability benefits due to migraine. Among the 151 full-time, part-time or self-employed respondents, 95 (62.9%) reported a median of three days (IQR: 2-5) of absence from work due to migraine within the past month. When asked about how migraine affected their productivity while at work on a 0-10 scale (0 being “not at all” to 10 “completely”), respondents reported a median of 4 (IQR: 2-6). Among the 141 full- or part-time employed patients, 120 (85.1%) reported that their employer knew about their migraine diagnosis and among these, 26 (21.6%) reported that their employer offered support regarding migraine. 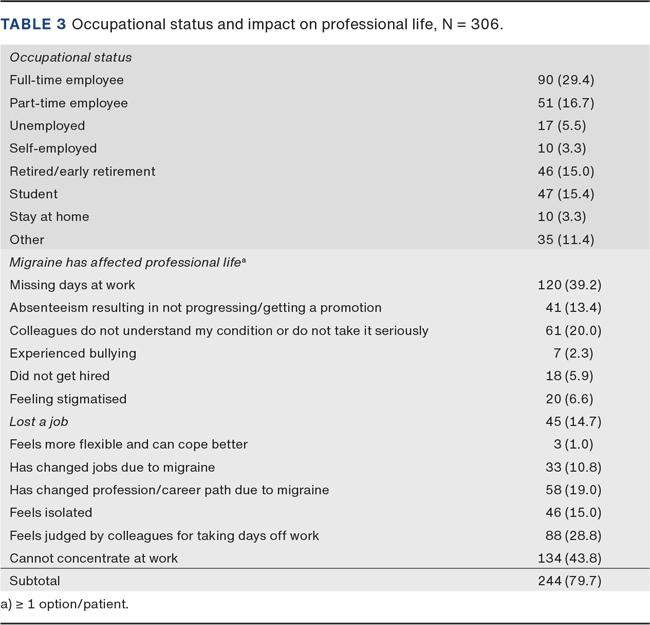 The major finding of this survey is that frequent or chronic migraine has a profound, negative influence on the lives of people living with migraine, with 99% of respondents reporting a negative impact on either private, social or professional life.

The negative impact is, however, by no means only personal as the negative consequences extend well into society due to the high use of public healthcare services, reduced work productivity and increased absenteeism. The high prevalence of migraine in the general population, disease burden and substantial economic impact on society [11] call for improvement of migraine management.

The GP is typically the first healthcare professional whom a patient with new-onset migraine consults, and the GP remains the primary treatment-responsible healthcare worker in most cases. A little more than half of the patients were, indeed, diagnosed by their GP; however, it is noteworthy that in approximately 30% of cases, a diagnostic delay of more than one year was observed and that the final diagnosis required several consultations or referrals to a neurologist or headache specialist. This may seem alarming, but in an international perspective, the diagnostic delay in this Danish cohort was lower than in an Italian study on migraine with and without aura, which reported a mean diagnostic delays of 6.7 and 10.7 years, respectively [12].

The present cohort was highly selected with a pre-specified quota of patients reporting current or previous use of PT, and we cannot determine whether the proportion of patients on PT is representative. However, for the most part, the reported PTs are in accordance with the national migraine treatment guidelines [13]. However, almost 11% of patients reported that they used non-steroidal anti-inflammatory drugs (NSAIDs) as PT, which is generally not recommended as this may precipitate the development of MOH. Among the 265 patients reporting use of abortive treatment, the majority reported use of common analgesics (paracetamol or NSAIDs) according to guidelines. Disturbingly, though, 11% of patients reported use of opioids as abortive treatment, which is not recommended because of their addictive potential, the risk of MOH development and the impeding efficacy of non-opioid analgesics in subsequent headaches [14].

Although most patients reported use of PTs and ATs recommended within Danish treatment guidelines [13], the degree of dissatisfaction with treatment is concerning. Only 23% of patients reported being mostly or completely satisfied with their PT, and 41% were mostly or completely satisfied with their abortive treatment. For a PT to be considered successful, it should reduce the attack frequency or the number of headache days by 50% within three months [15]. Of note, beta-blockers, the most widely used class of PT in migraine, is about 50% effective in producing a 50% reduction in attack frequency, whereas the other classes of PTs (antidepressants, calcium antagonists, antiepileptic drugs, etc.), are similar or less efficient [15]. All these treatment options are associated with significant and often non-tolerable side effects, and existing comorbidities may further limit the number of treatment possibilities. This explains why 80% of patients had experienced treatment failure and why a substantial proportion of patients were not satisfied with PT. It further explains why many patients seek alternative treatments such as acupuncture and homeopathy although the evidence in favour of these treatments is scarce and/or questionable [16, 17].

With the high intensity of pain during migraine attacks the preceding month, it is understandable that almost 90% of respondents reported living in fear of their next migraine attack. That migraine has a profound impact on the patients’ emotional, personal and professional life is well established [2]. The high number of respondents reporting a negative impact was, however, higher in the present study than indicated by results from the main study [10]. This may potentially be explained by the relatively high proportion of female respondents in the present study as women with chronic migraine have been reported to have more migraine-related disability than men [18]. Interestingly, our study presented data from a population of migraine patients who with regard to frequency of migraine days and treatment failures are eligible for treatment with the newly marketed anti-CGRP mAbs. Compared with beta-blockers, the anti-CGRP mAbs show similar to slightly superior 50% responder rates, depending on the dosage and compound investigated and whether tested on an episodic or chronic migraine population. In contrast to the established PTs, the anti-CGRP mAbs seem to have a much more favourable side-effect profile [19].

The annual cost of treatment with the three available anti-CGRP mAbs in Denmark (Aimovig, Ajovy and Emgality) ranges from DKK 50,000 to DKK 57,000, which is considerably higher than already established treatments such as beta-blockers. Based on American data, treatment with anti-CGRP mAbs was proven cost effective [20], but a similar analysis based on Danish healthcare data is still needed. In Denmark, anti-CGRP mAbs are only prescribed by hospital-based neurologists, and currently approximately 950 patients are receiving anti-CGRP mAbs. It is, however, estimated that 5,000 patients would be candidates for anti-CGRP mAbs and waiting lists for initiation of treatment are increasing due to limited resources in the individual neurological departments. In light of the present study and American cost-effectiveness data, it can be presumed that a wider implementation of anti-CGRP mAbs treatment in Denmark would be beneficiary.

This study has some limitations that must be taken into consideration. First, this study reports on a selected cohort of migraine patients with ≥ 4 MMDs and pre-specified quotas of patients reporting their use of PTs and experience of treatment failure. Additionally, we had a higher number of female than male respondents. Thus, the data presented here do not reflect a general migraine population but are, in our opinion, representative for migraine patients with severe disease, which, given the newly released anti-CGRP mAbs, is a migraine phenotype of interest. Another significant limitation is that the survey is based on self-reported data that cannot be confirmed. In the survey, patients reported their number of migraine and headache days, but not the number of days they were using analgesics, making it likely that the headache may be caused or aggravated by medication overuse in a number of patients.

This study confirmed that frequent or chronic migraine (i.e. ≥ 4 MMDs) and treatment failure is associated with a considerable negative impact on personal, social and professional life, highlighting the need for continuous research and drug development, and awareness of new treatment possibilities.

Correction Figure 1 has been edited on 2 November 2021.

Correspondence Agneta H. Snoer. E-mail: agneta.henriette.snoer.02@regionh.dk Accepted 10 August 2021Conflicts of interest Potential conflicts of interest have been declared. Disclosure forms provided by the authors are available with the article at ugeskriftet.dk/dmj Acknowledgement The “My Migraine Voice” survey was funded by the Novartis Pharmaceutical Corporation. References can be found with the article at ugeskriftet.dk/dmj Cite this as Dan Med J 2021;68(11):A08200592