for femoroacetabular impingement (FAI) [1-3]. However, there is a paucity of midterm and long-term follow-up studies, and they report moderate to good results [4-7]. A midterm outcome study by Skendzel et al reported a high failure rate in FAI patients with joint space width (JSW) ≤ 2 mm undergoing hip arthroscopy [7]. A total of 86% of the patients underwent conversion to total hip arthroplasty (THA). The cohort with a JSW of

> 2 mm had a conversion rate to THA of only 16%. Almost identical conversion rates were reported in a newly published ten-year follow-up study by Menge et al [3].

In Denmark arthroscopy of the hip is rarely performed if the JSW is less than 3 mm at the lateral sourcil.

We hypothesise that patients with symptomatic FAI benefit from arthroscopic surgery and that the results are related to age and to the grade of cartilage degeneration in the hip joint.

The primary aim of the study was to report conversion rates to THA in a cohort of patients with FAI who had been operated arthroscopically by the senior author, BL, from 2007 to 2009.

The secondary aims were to report patient-reported outcome measures (PROMs) in the non-THA group, the peri-operative findings and a possible association between conversion rate and THA and the grade of

This was a retrospective cohort study with 76-100- month follow-up. Using a hospital database, we identified a total of 127 consecutive patients with FAI who

underwent arthroscopic hip surgery performed by BL from 2007 to 2009 at a private clinic in Denmark.

1. A history of chronic hip pain refractory to conservative treatment

3. X-ray examination of the hip using the antero-posterior view showing the morphology of the cam-

4) Necrosis of the femoral head

7) Loose bodies in the hip

9) Not responding to the questionnaires and the PROMs.

The patients who had not been converted to THA were contacted by phone and asked to complete the PROMs and to answer whether they would be willing to have arthroscopic surgery again. The questionnaires were completed online. We also collected the Copenhagen Hip and Groin Outcome Score (HAGOS), the European Quality of Life-5 Dimension health questionnaire (EQ-5D) and the Hip Sports Activity Scale (HSAS) as reported by The Danish Hip Arthroscopy Registry [11].

The HAGOS consists of six sub-scales assessing symptoms, pain, function in daily living, function in sports and recreation, participation in physical activities and hip- and/or groin-related quality of life. Each sub-scale is scored separately from 0 to 100 with 100 representing the best outcome [12, 13]. The HAGOS is a questionnaire designed both for young and middle-aged adults undergoing non-surgical treatment or hip arthroscopy and for patients presenting with groin pain. The EQ-5D is a widely used generic health-related quality of life instrument [14, 15]. The HSAS is a validated activity measurement that is useful in FAI patients [16].

The patients were operated in the supine position through standard antero-lateral and mid-anterior portals. After a diagnostic round was accomplished from both portals, the relevant pathology was addressed. Before 1 March 2008, labral tears were all debrided. After 1 March 2008, refixation with suture anchors was performed, if possible. The number of anchors used for the repair depended on the quality of the labrum and the size of the tear. In patients with a Beck grade 4 acetabular chondral defect, microfracture was performed in lesions smaller than 2-3 cm², and debridement was performed only in larger lesions [6, 8, 9]. Bony deformities such as pincer and/or cam deformity were addressed by osteoplasty using a motorised burr [17]. Range of movement was assessed under direct vision and under image intensifier control. The postoperative protocol included partial weight bearing not exceeding 20 kg for two weeks. All patients were instructed according to a standardised rehabilitation protocol by the physiotherapist at the hospital.

Continuous variables including the PROMs were evaluated for normality and outliers. Normally distributed variables were analysed using the t-test, one-way ANOVA or Pearson’s correlation. The results are presented as means and standard deviation or 95% confidence intervals (CI). Variables with no normal distribution and ordinal variables were analysed using the Mann-Whitney test or Spearman’s correlation, and the median and range are presented. Categorical variables are presented with frequencies and compared using Fisher’s exact test. Time to conversion to THA used censored data and was analysed with Kaplan-Meier statistics. All p-values were two-sided, and p-values below 0.05 were considered significant. 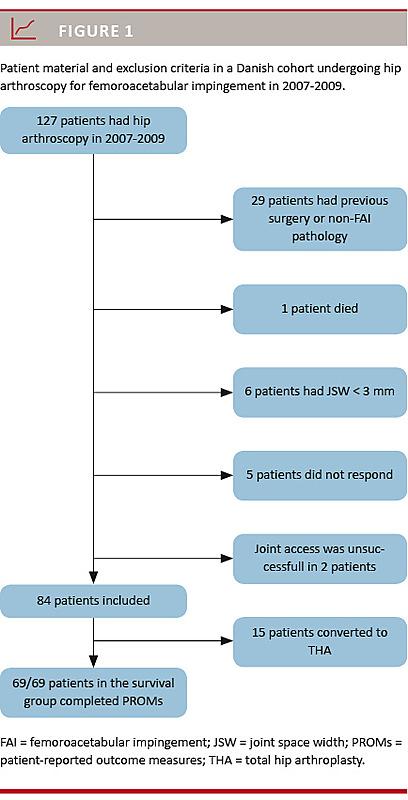 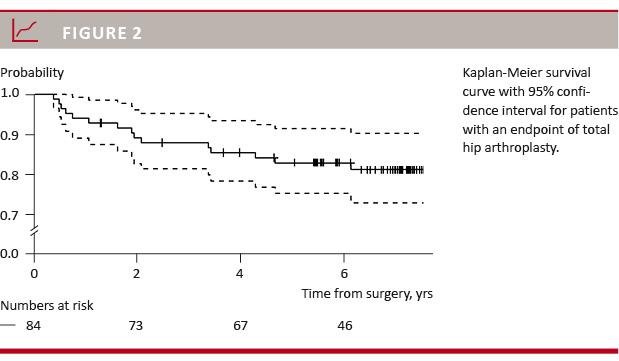 . Seven patients (8.2%) had a re-arthroscopy within this period. No infections or nerve injuries were reported. 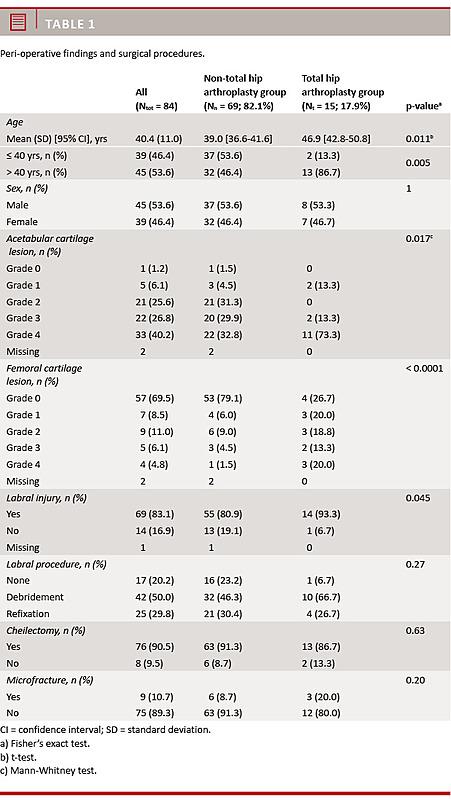 Twenty-five patients underwent labral repair using suture anchors. Four of these patients were converted to THA and three had a revision arthroscopy. We observed no significant difference between the two groups regarding procedure (refixation or debridement of the labrum) or no procedure (p = 0.27). The PROMs of the group who had surgery after 1 March 2008 scored lower on the subscale HAGOS symptoms (p = 0.03) and HAGOS-ADL (p = 0.007). 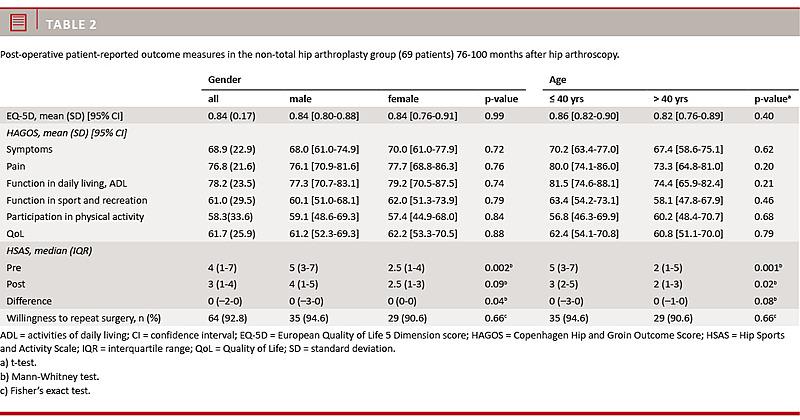 Of the 69 patients in the non-THA group, 64 patients (92.8%) were willing to have the arthroscopy performed again. No significant association was observed between the peri-operative findings and PROMs in the non-THA group, except for labral injuries. Excluding patients who had re-arthroscopy did not change that. Patients who had a labral injury had a significantly, lower pre-HSAS and a higher reduction in HSAS postoperatively (p = 0.04). Furthermore, the subscale HAGOS-ADL was significantly lower in patients with a labral injury (p = 0.05).

The midterm outcomes of this cohort are similar to the results of Skendzel et al, Comba et al, Menge et al, but differed from those of Haefeli et al who only observed two of 50 (4%) patients being converted to THA after 7-9 years [3, 5-7]. 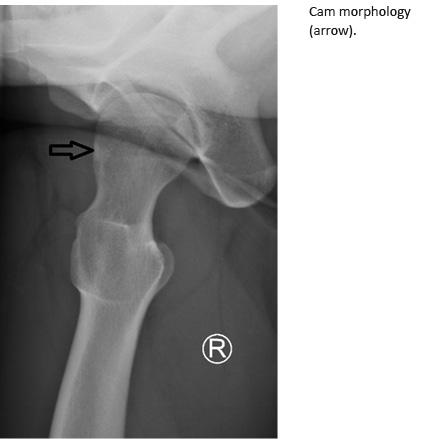 In a study based on FAI patients from the Danish Hip Arthroscopy Registry (DHAR), the two-year PROM data were comparable with data from our study [20]. HAGOS scores were almost identical in all subscales. EQ-5D increased to 0.84 compared with 0.78 in the DHAR, and HSAS declined in the present study to 3.0 compared with 3.3 in the DHAR.

A limitation to our study is the missing pre-operative scores, except for the HSAS. Because the inclusion criteria, patient age, peri-operative procedures, cartilage lesion grades and the values of the postoperative PROMs are comparable, it is reasonable to consider that our cohort experienced an improvement in PROMs similar to that experienced by patients in the study by Sansone et al. In that study, the PROMs were significantly improved. The EQ-5D improved from 0.58 to 0.76. and all the HAGOS subscales improved from 18 to 28 points each [19]. It is noteworthy that the highest scores in the HAGOS were achieved in the subscales describing pain, symptoms and ADL. In the more physical activity-related and sports-related subscales, the patients experienced lower scores.

Because the HSAS reflects the level of functional activity, the decline during the follow-up from four to three in our study may appear discouraging. However, such findings can be expected with longer follow-up as many people tend to stop engaging in competitive sports as they get older, for social and job-related reasons. Some people also tend to avoid sports with a high injury rate after they have had surgery.

This study suggests that arthroscopic hip surgery is a safe procedure and that it may lead to promising midterm results with regard to low conversion rates to THA and a high level of patient satisfaction in patients who are younger than 40 years of age. Arthroscopic surgery may still be performed in patients who are older than 40 years with a high level of patient satisfaction and a good functional outcome. However, peri-operatively identified high-grade cartilage lesions are risk factors for conversion to THA at 6-8 years of follow-up.

ACKNOWLEDGEMENTS: The authors would like to extend their gratitude

to Tobias Wirenfeldt Klausen, Statistician at Herlev Hospital, for helping with statistical analysis of the data set.