The incidence of tibial plateau fracture in Denmark was recently reported to be 10.3/100,000/year [1]. Conservative management is often not feasible so the majority of fractures are treated operatively [2]. The objective of surgical treatment is anatomical joint reconstruction, rigid fixation and axial alignment [2].

Several studies have evaluated the outcomes of surgical treatment [3-6]. Most studies lack long-term follow-up on both functional and radiological outcomes, as well as on quality of life (QoL). In addition, most studies do not compare the results to established reference populations.

In general, the complication rate after treatment of tibial plateau fractures is high [7]. Complications such as deep and superficial infection, soft tissue damage, compartment syndrome, deep venous thrombosis (DVT), septic arthritis and additional need for surgery are all observed during the acute phase [2, 7, 8]. Complications following the initial phase include loss of range of motion, ligamentous or meniscal injury, knee instability, pseudoarthrosis and post-traumatic OA, among others [2, 8].

Minimally invasive procedures with bone tamp reduction, allograft and percutaneous screw fixation may be a treatment option with low risk of complications and a high level of satisfactory clinical and patient-reported outcomes for a selected patient group.

The objective of this study was to evaluate the functional and clinical outcomes after lateral tibial plateau fractures (Arbeitsgemeinschaft für Osteosynthesefragen (AO) type 41-B2 and B3) treated with minimally invasive bone tamp reduction, allograft and cannulated percutaneous screw fixation.

Included were all patients with fractures of the lateral tibial plateau, AO type 41-B2 and B3 [9], treated with minimally invasive bone tamp reduction, allograft and percutaneous screw fixation. Excluded were patients with open fractures, fractures treated with open reduction, fixed-angle plates or external fixation. Excluded were also patients with other fractures in the same extremity or patients who had the surgical procedure performed abroad, as well as patients who were unable to fill out the patient-reported questionnaires due to physical or mental disability (Figure 1). The Danish Data Protection Agency (R. no. 2010-41-4354) approved this study.

During the study period, the departments’ standard guideline on treatment of lateral tibial condyle fractures was percutaneous screw fixation with or without grafting. In the treatment period, five experienced trauma surgeons performed all of the procedures. The choice of surgical procedure and the use of grafting materials were at the discretion of the individual surgeons. The operative procedure is described in Figure 2.

Radiological outcomes: The fracture classification was performed according to the AO classification [9]. The fractures were assessed preoperatively using computer tomography (CT). The presence of osteoarthritis (OA) was evaluated both preoperatively and at follow-up according to Kellgren and Lawrence’s [10] recommendations. Articular depression and condylar widening were evaluated using X-rays as described by Rasmussen [11]. For this assessment, one X-ray was taken six weeks post-operatively and another was taken at the time of follow-up. Valgus/varus malalignment was evaluated as described by Browner et al [12]. A valgus/varus malalignment > 5° was considered significant. At follow-up, the X-rays were obtained as bilateral weight-bearing X-rays.

QoL was assessed using the Eq5D-5L [13], a standardised and validated instrument for assessing health outcomes. Other studies have used the Eq5D-5L for measuring outcomes after tibial plateau fractures [3].

Functional performance was assessed using the KOOS [14]. The KOOS was developed as an instrument for assessing patients’ opinions about their knees and associated problems. The instrument was intended for use with knee injuries that could result in post-traumatic AO. A KOOS reference population from southern Sweden was available [15]. Other studies have used the KOOS for measuring outcomes after tibial plateau fractures [2, 3].

Knee range of motion (ROM) was evaluated using active extension and flexion of the knee with the patients lying supine on the examination table. The patients were asked to do maximal flexion and extension, and the angle was measured with a goniometer.

All of the patients were contacted by mail and informed about the study. They were then invited to attend a clinical evaluation in August 2011. Mean values, standard deviations (SD) and 95% confidence intervals (CI) are given. Due to the small number of patients (n = 28), statistical analyses were not performed.

A total of 19 fractures were classified as AO type 41-B3 and nine as 41-B2 fractures. Associated injuries were found in two patients: one with multitrauma and one with a preoperative lesion of the peroneal nerve. Complications were present in one patient who developed complex regional pain syndrome (CRPS). Additional surgical procedures were performed in eight cases. Additional surgery included the removal of screws after union (n = 7) and a total knee alloplastic (TKA) procedure (n = 1).

The patient who developed subsidence between six weeks post-operatively and the time of follow-up had a further depression of 10 mm evaluated on anteroposterior and side X-rays. At follow-up, inadequate reduction was present in five cases with > 5 mm depression of the joint surface and three cases presented with valgus/varus deformity > 5°.

Compared with the opposite knee, the mean movement deficit was 10.0° with a range from 0-20°. Two patients had extension deficits of > 5°. Six patients reported that they were unable to walk more than 1 km.

Outcomes according to maintained anatomical reduction

This study shows that treatment of a selected patient-group with lateral tibial plateau fracture using minimally invasive bone tamp reduction, allograft and percutaneous screw fixation is a safe and reliable method that has a high rate of union, a low rate of complications and satisfactory patient-reported outcomes.

At a mean 2.5 years after surgery, the Eq5D-5L values were not significantly worse compared with the established Danish reference norms. To the best of the authors’ knowledge, this is the first study to use reference norms from an established reference population to evaluate the long-term patient-reported QOL after tibial plateau fractures treated with minimally invasive bone tamp reduction, allografts and percutaneous screw fixation.

A small number of studies have used patient-reported outcome measures, but only a single study used a disease-specific, patient-reported questionnaire [2]. However, that study did not compare the findings to those of a reference population. Compared with the established KOOS reference population [15], the patients in the present study reported significantly lower KOOS scores on three subscales, which is a novel finding. The KOOS subgroup sport was the most limited, which is in line with findings from other studies [3]. The limitations in the KOOS subscale sport may be due to the fact that even small functional deficits of the knee joint reduce the patient’s ability to participate in sports.

The patients in the present study were treated with minimally invasive bone tamp reduction, allograft and percutaneous screw fixation. Subsequently, 82% achieved anatomical reduction, which is in line with, or better than, other studies reporting this surgical method [4, 5]. These results are comparable to those reported for other surgical methods [4, 8, 9].

In this study, the patients who had inadequately reduced fractures also had poor functional outcomes and restrictions in QOL compared with the other patients. These findings were in line with those reported in previous research [8]. However, Koval et al [4] did not find this association. The findings in the present study support the notion that proper anatomical reduction of the articular surface is essential for functional outcomes, QOL and the development of post-traumatic OA after treatment for tibial plateau fractures.

The authors have previously reported on lateral tibial condyle fractures treated with percutaneous screw fixation without the use of grafting [6], also in the period from 2005-2010, and shown results that are comparable to those of the present study group. However, the results are both retrospective and no conclusions regarding the effect of grafting can be drawn from these studies.

This study has a number of limitations. First, it is a retrospective study with a small, select group of patients. Because of the cross-sectional design, the time to follow-up was variable. Second, the mean follow-up period was 2.0 years. Studies of lower-extremity trauma have demonstrated changes in outcomes with the length of follow-up [18]. Volpin et al [19] reported that the incidence of post-traumatic OA following intra-articular fractures of the knee tended to develop from six to eight years after injury. These findings are in line with the findings in the present study which show worse outcomes for patients with a longer follow-up period.

Moreover, the decision concerning operative procedure and the use of allografting was made by the individual surgeon at the time of treatment and this may potentially cause bias.

Nevertheless, the patient-reported KOOS scores were significantly below the established reference population in three of five subscales.

Acknowledgements: The authors wish to acknowledge the Department of Orthopaedic Surgery and the Department of Occupational and Physiotherapy Aalborg University Hospital, Denmark, for providing unrestricted grants and Søren Kold (MD) for scientific input to the manuscript. 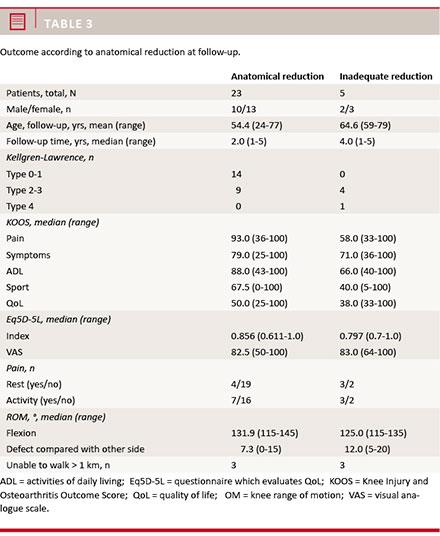 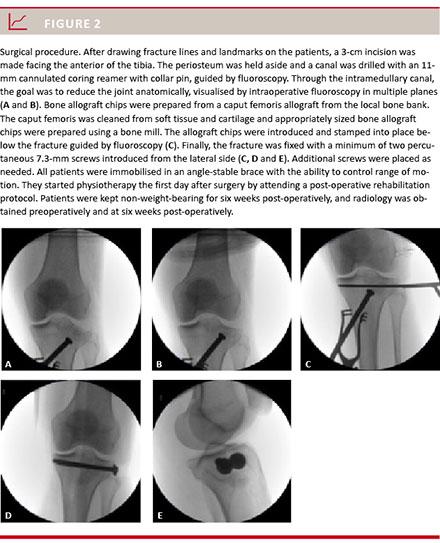 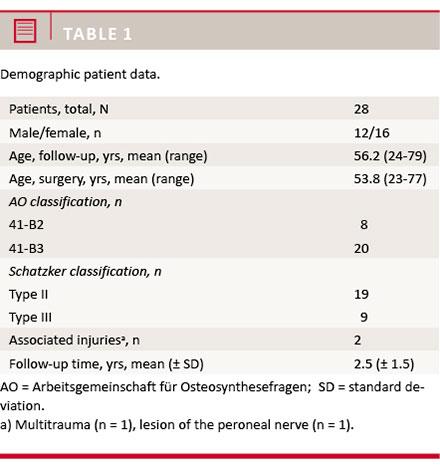