The influence of age, duration of symptoms and duration of operation on outcome after appendicitis in children

This was a retrospective study including children aged 0-16 years who were treated due to suspected appendicitis in the 2007-2011-period. Patient data were retrieved from their files using the Nordic classification procedure codes for appendectomy: KJEA00, KJEA01 and KJEA10 and the International Classification of Diseases (ICD) 10 diagnosis codes for appendicitis: DK35.0, DK35.1, DK35.9, DK36.9 and DK 37.9. Furthermore, records of all readmissions within 30 days of the primary operation were retrieved. A non-satisfactory outcome was defined as a post-operative length of stay in hospital (post-operative length of stay (LOS)) ≥ 5 days and/or readmission due to complications within the first post-operative month. Based on the conclusion of the surgeons’ report, appendicitis was defined as complicated if the appendix was gangrenous, perforated or had a periappendicular abscess. The patients were stratified into three age groups (Table 1 and Table 2). A single dose of prophylactic antibiotics (cefuroxime/metronidazol) was administered intravenously before surgery in simple appendicitis. Preoperative administration of cefuroxime/metronidazol was followed by daily intravenous administration for 3-5 days only in cases of complicated appendicitis according to the preference of the surgeon or microbiologist.

Non-parametric statistical analysis was conducted as appropriate (Mann-Whitney test, Spearman test and Fischer’s exact test). Significance for all statistical tests was considered at 5%.

We excluded 16 children whose primary operation was performed in another surgical department before the children were referred to our centre for treatment of complications. The evaluated material includes 108 children (51 boys and 57 girls) aged 0-16 years. For the total group of patients, the mean total LOS and the mean post-operative LOS were 5.1 and 4.8 days, respectively. Table 1 shows LOS in relation to the patient’s age in cases with a satisfactory and a non-satisfactory outcome. A total of 50 (46.3%) of the children had complicated appendicitis including two patients with periappendicular abscess in whom primary ultrasound-guided percutaneous drainage was performed (Table 2).

None of the patients with a post-operative LOS ≥ 5 days but no re-admission had a post-operative abscess, deep wound infection or other serious complications. Fifty-eight children had open surgery and 45 children had a laparoscopic appendectomy, which was converted into open surgery in three cases. The mean surgical time from the first incision to the last suture was 57 minutes for all surgical procedures; the two cases with ultrasound-guided percutaneous drainage were excluded from this measure. The surgical time related to the type of outcome and the type of appendicitis is shown in Table 3. Significantly more patients had complicated appendicitis (73% (35/48)) in the group with a non-satisfactory outcome than in the group with a satisfactory outcome (25% (15/60)) (p < 0.0001).

Among the patients with complicated appendicitis, 31 had a gangrenous appendicitis, 17 patients had a perforated appendicitis and two had a periappendicular abscess. Among the 58 patients with simple appendicitis, five had a normal histology. Two of those patients were re-admitted and diagnosed with salpingitis and Meckel diverticulitis and were therefore included in the group with a non-satisfactory outcome. In all, 48 patients had a non-satisfactory outcome (Table 1). Five of these patients had a post-operative LOS = 5 days. Eighteen patients had re-admissions, eight of whom also had a post-operative LOS ≥ 5 days. The causes for re-admissions included fever, abdominal pain, vomiting, suspected abscess but only two verified (14 patients), pneumonia (two patients), change in prolonged antibiotic therapy (one patient) and deep wound infection (one patient).

In a study by Whisker et al from a British tertiary paediatric surgical centre, the patients’ age and total LOS were very similar [10] to ours. In our study, 16.5% of the patients were readmitted which is in accordance with the 18% readmission rate presented by Johansen et al [7], but somewhat higher than British figures from tertiary paediatric surgical centres [10, 11]. Our concept with open post-operative access to the ward in case of any complaints may facilitate a higher readmission rate. Complicated appendicitis was seen more often among the patients in the group with a non-satisfactory outcome (76%) than in the group with a satisfactory outcome (25%). Perforated appendicitis is a well-known risk factor for complications and was seen in 16% of our patients. This is slightly less than the National perforation rate of 24% published by Johansen et al [7] and the perforation rate of 37% from British [9] and 39% from American paediatric surgical series [10]. In another British paediatric surgical unit, the rate of gangrenous and perforated appendicitis was 42% compared to 44% in our series [11]. Several studies of paediatric materials have found that perforated appendicitis is seen more often in the younger children [8, 9]. Duration of symptoms may be a major factor in the high perforation rate seen in young children, as signs and symptoms may be less specific [12, 13]. Although it is generally understood that appendicitis in very young children follows a different course than that of older children, the exact age cut-off is less clear.

Narsule et al [8] found clearly that a longer delay between onset of symptoms and surgical intervention was associated with increased rates of perforation in children. No child with symptoms for less than 12 hours had a perforated appendicitis. The perforation rate rose in a linear fashion from 10% at 18 hours to 44% at 36 hours. If symptoms were present for more than two days, the risk of perforation was greater than 40% [8]. They also found that perforation correlated more with pre-hospital delay than with in-hospital stay [8]. In our study, a long duration of symptoms before admittance to the final hospitalisation with diagnosis and operation was clearly associated with complicated appendicitis and a non-satisfactory outcome. This finding was even more significant in the younger children (Table 1 and Table 2). In a retrospective study, such information may include uncertainty. However, among those with a non-satisfactory outcome, 33% (16/48) of our patients had been hospitalised somewhere else but discharged, and 10% (5/48) had been admitted to our ward but discharged before re-admittance for surgery. Our paediatric surgical guidelines were modified late in the study period, so all patients with suspicion of acute appendicitis who were not immediately operated were admitted for a 12-24-hour observation period and evaluated by a senior paediatric surgeon with the support of ultrasound diagnostics when appropriate. Besides such changes, the use of the clinical scoring system designed by Alvarado combined with increased frequency of computed tomography in selected cases for acute appendicitis may lower the risk of overlooking the disease and discharging patients without surgery [14, 15]. The perforation rate may be a quality indicator for the public health-care system or the referral pattern, but recognizing the disease at an early stage and getting the patient to the right place are the factors that would make a difference. Normal histology in 4% of the patients is in accordance with the figures from other paediatric surgical centres [10]. In our study, there was no difference between the patients who had open surgery and those with a laparoscopic operation in respect of whether they had a satisfactory or a non-satisfactory outcome (Table 3). But irrespective of operative method, a longer surgical time was associated with a non-satisfactory outcome (Table 3).

Operating complicated appendicitis takes longer time than operating simple appendicitis (Table 3). This is in agreement with other studies that have presented a long surgical time for complicated appendicitis which is in line with our figures [16]. However, we cannot exclude that other factors are involved and a long surgical time may therefore be an independent factor associated with a non-satisfactory outcome. The data on the surgeons performing the operation are difficult to interpret. The rather long surgical time for the specialist surgeon performing operations with a non-satisfactory outcome may be due to the fact that sometimes the specialist has to take over an operation where the fellow had already operated too long (Table 3). Other studies have shown longer surgical times when fellows are involved. The reason may be that the specialist uses time for instruction of the fellow during surgery [17]. It may influence the flow and the speed of surgery positively for an operating fellow if a scrubbed specialist surgeon is present from the start of the session .We found that the surgical time for laparoscopic operation exceeded that of open appendectomy. The mean surgical time for laparoscopic operations in two other paediatric studies was 60 and 62 minutes, respectively, and for the open appendectomy it was 57 and 42 minutes, respectively [18, 19].

In a meta-analysis of 2,633 operations in children based on another 11 studies, the mean surgical time used for laparoscopic operation was 54 minutes, and for open appendectomy it was 47 minutes [20]. This study also found a shorter post-operative LOS and fewer complications with respect to wound infections and ileus after laparoscopic operation than after open appendectomy, so a laparoscopic approach as the first choice seems well indicated [20]. In order to improve the treatment results in young children of this common serious emergency surgical disease, it may be necessary to educate the public and first-line health care providers about the risk of delay in appendicitis in children. National guidelines on the subject may be helpful. Furthermore, though a cut-off age has not been established, young children may benefit from direct referral and access to hospitalisation in a regional or tertiary paediatric surgical centre. 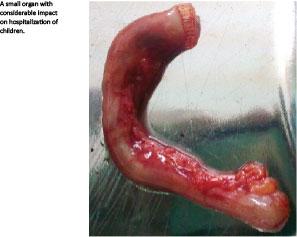 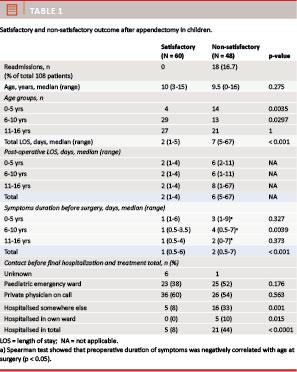 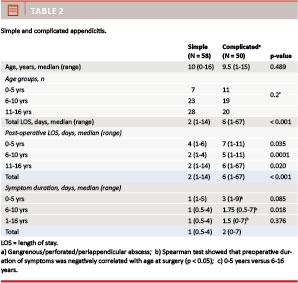