Joinpoint regression analysis of suicides in Denmark during 1980-2015

Suicide is a major health problem in Denmark and bears extensive individual and social costs. Historically, the suicide rate in Denmark has been on a higher level than the rates of the other Scandinavian countries despite comparable welfare systems and economic and social conditions [1, 2]. The suicide rate in Denmark increased from 25 to around 30 per 100,000 inhabitants from 1970 to 1980 [3]. In 1980, a sharp decrease in the rate occurred [4]; after this decline, the rate declined to a level comparable to that of the other Scandinavian countries [4].

Psychiatric, demographic, economic as well as social risk factors for suicide have been identified. Among young people, suicide counts as one of the most frequent causes of death although the suicide rate is highest among persons aged 80 years and above [5]. Suicide risk is particularly high among persons hospitalised and recently discharged from psychiatric departments, but an increased risk is also noted in relation to a family history of suicide, unemployment and among singles [6].

Various opportunities for prevention have been identified [7, 8]. Prevention strategies are often characterised according to the universally-selected-indicated model

(USI model), denoting whether the intervening effort is aimed at the general population (universal), a risk group (selected) or specific individuals at risk of suicide (indicated) [9]. Examples of intervening efforts are: means

restriction, such as changing pack sizes of analgesics, screening in general practice and psychosocial therapy [10]. In order to optimise prevention, it is important to monitor the development of the suicide rate. WHO has emphasised the need for continuous monitoring of suicide rates and points out that a national action plan is an essential part of prevention [11]. Danish registry data constitute a unique opportunity to monitor developments concurrently with implementation of prevention strategies.

The purpose of this study was: 1) to analyse the development of the suicide rate from 1980 to 2015 using joinpoint regression analysis, 2) to analyse the suicide rates specifically for gender and age groups, and 3) to study the distribution of suicide methods from 2000 to 2014. This is highly relevant to optimise prevention and evaluate already initiated efforts.

The study was carried out using a register-based cohort design.

Individual-based registry data from the Danish Civil Registration System (CPR) and the Danish Cause of Death Registry (COD) were linked via the unique CPR-number. The CPR covers socio-demographical data on all persons living in Denmark and COD includes death date, cause of death and other related information.

All persons residing in Denmark (except Greenland and the Faroe Islands) aged 15 years or older from 1 January 1980 to 31 December 2015 were included as participants.

The outcome of interest was death by suicide. In Denmark, cases of unnatural deaths, such as suicide, are examined by regional county doctors who determine the cause of death. If the cause of death is unknown or if conditions apply, which make the determination uncertain, such as substance abuse, then a medico-legal examination is conducted. Causes of death were recorded in the COD according to the eighth revision of the International Classification of Diseases (ICD-8) until 1993,

after which the ICD-10 was used. During the examined

Changes in the suicide rate from 1980 to 2015 were analysed using a joinpoint regression model. Based on a Poisson regression model for incidence rates, the positions of joinpoints and regression coefficients were estimated while the optimal number of joinpoints was selected by means of a permutation test [13]. In order to facilitate an interpretation, the slopes were converted to annual percentage changes (APCs); i.e. the estimated annual change in rate from one joinpoint to the next in percentage. To gain a detailed overview, a weighted

average of combined APCs, average annual per cent change (AAPC), were computed for the years 1980-1999 and 2003-2015. These periods were identified in a preliminary analysis as consecutive years of sufficient number and with a comparable trend. Data were analysed using SAS version 9.4 and the Joinpoint Regression Program version 4.5.0.1 [14].

Over the 35-year follow-up 35,083 suicides were registered in Denmark. 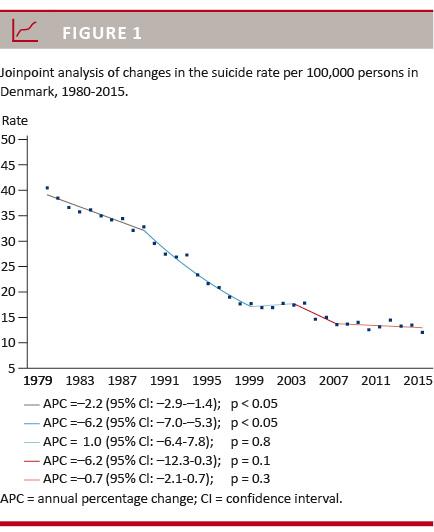 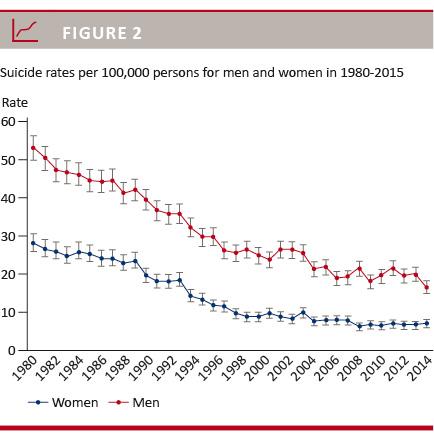 Despite a parallel decline over time, the suicide rates differed by age groups (Figure 3). 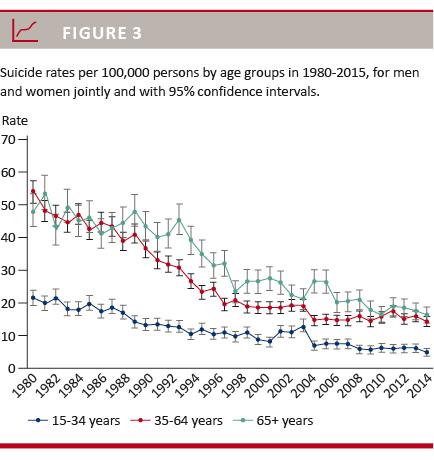 Apart from drowning, a greater occurrence of suicides by all methods was observed among men when compared with women in 2014 (Figure 4). 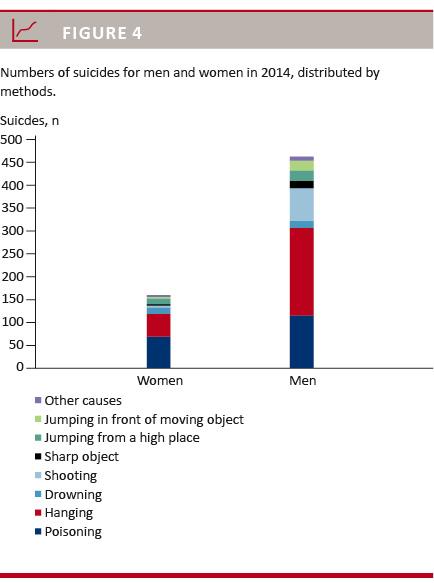 This was pronounced for hanging, shooting, and jumping in front of moving objects. In relative terms, suicide by poisoning was more frequently seen among women, although,

To the authors' knowledge, this is the first study to investigate changes in the suicide rate in Denmark with joinpoint regression analysis. A significant decline was observed during the 1980-1999 period, whereafter more modest changes have been observed. The suicide rate was noticeably higher among men than women. With respect to age, the suicide rate was highest amongst older adults aged 65+ years.

Changes in the suicide rate

Our findings show that the suicide rate decreased by 2-6% annually until 1999, and during this period the rate was more than halved. This is consistent with previous studies [3, 4], and Nordentoft observed a correlation

between this decrease and means restrictions [9]. The changes in the trend after 2000 are varying and more uncertain as noted in the APCs that fail to reach significance, and have not previously been addressed. During 2003 to 2015, the AAPCs indicated a significant decrease in the suicide rate. Yet, the decline is noticeably lower than in previous decades. The increased focus on suicide prevention with improved psychiatric treatment, the establishment of suicide prevention centres, and further means restrictions [7, 8, 15] have been suggested as explanations for the observed decline.

It is surprising that the suicide rate has seemingly been stagnating since 2007. There are several possible explanations for this. Firstly, targeted strategies might have missed high-risk groups, e.g. people with psychiatric disorders and/or substance misuse and homeless people. Secondly, the National Action Plan for Suicide Prevention was terminated in 2004, ending the coordinated effort for preventive initiatives. It seems that the current efforts are not producing a change in the suicide rate in Denmark, and further reductions hinge on new and effective preventive measures.

Although gender differences have decreased considerably since the early 1900s [2, 3], it is well established that men have higher rates than women [4].

This might be related to use of methods with higher lethality among men, such as shooting, hanging and jumping. These methods can be termed determinant methods, providing little opportunity for rescue, and as estimated by Miller et al, the case fatality rate is found to be higher among men [16]. Additionally, cultural norms and level of intent might affect both the notion of suicide as a resolution and the choice of a determinant method.

The rates by age groups followed the trend of the overall population. After 1987, the youngest and oldest age group had the lowest and highest suicide rate, respectively. For people aged 65+ years, the observed decline might be a result of improved health, medical care and living conditions in late life [5]. The age differences are consistent with previous studies [3]. However, a larger difference between the oldest age groups would have been expected [5]. It is possible that these were not visible due to the size of the age groups, e.g., Erlangsen observed an increased suicide rate for males aged above 80 years compared with males aged between 65-79 years [5]. Furthermore, some of the observed variation could be attributed to a cohort effect, as suggested by previous studies [3].

The distribution of suicide methods in 2014 (Figure 4)

illustrates the higher prevalence of male suicides by determinant methods. Restrictions on access to the means available for suicide methods have been identified as a promising prevention strategy [7-9, 15, 17]. In Denmark, past efforts have included reducing availability of barbiturates and carbon monoxide in household gas and catalytic converters on cars [9, 15, 17] as well as the recent pack size restriction on weak analgesics [18]. Further gains using this strategy could include fences on bridges and train tracks, platform doors and programmes to reduce illegal handguns [7, 8].

The national data coverage was an advantage of the data analysis. The size of the study population increased the statistical strength of the calculations, although suicide is a relatively rare event. The accuracy of the suicide rates depends on correct registration in the COD. Changes in registration practice might influence the suicide numbers, especially from 1994, when the ICD-10 replaced the ICD-8. Furthermore, some level of underreporting might exist [19]. Still, Tøllefsen et al observed that the decreasing suicide rate could not be explained by misclassifications alone [3]. The ICD-10 includes death of undetermined intent as a separate category;

by only including “certain” suicides, the present study gained in external validity.

The suicide rate fell sharply between 1980-1999 in Denmark, but since then more modest changes have been observed. The rate is highest among the oldest age group and among males. Hanging, poisoning, and shooting were the most frequently used methods among men whereas it was poisoning followed by hanging, and drowning among women.

Conflicts of interest: Disclosure forms provided by the authors are available with the full text of this article at www.danmedj.dk