The emergency departments (ED) in Denmark cover acute medical, orthopaedic and surgical admissions. Patients acutely referred to the ED from a general practitioner (GP) can either be referred with specific symptoms or with a presumptive diagnosis. The latter is suggested by the GP based on patient history, clinical examination and perhaps simple laboratory tests. A recent study from a Danish ED showed that the majority, approximately 65% of the admitted patients, were referred with presenting symptoms, whereas 35% were referred with a presumptive diagnosis [1].

In Denmark, it has become more common to handle the referred patients according to their presenting symptoms rather than the presumptive diagnosis. Some Danish ED have recently introduced “emergency packages” that are based on frequently encountered presenting symptoms. Patients referred with a symptom are allocated to a suitable package and then examined according to that package [2].

Patients referred with a presumptive diagnosis tend to undergo examinations aiming to verify or disprove this diagnosis, which involves a risk of overlooking other crucial presumptive diagnoses. When a patient is referred with a symptom, the patient undergoes a series of examinations tailored to the given symptom(s). This can, however, result in a comprehensive range of examinations that may potentially increase cost and delay treatment, and this approach does not take into account the GP’s previous assessment, which may contain important considerations.

Only few studies are available on the diagnostic accuracy of GP referrals [3-9]. To the authors’ knowledge, no study has yet been performed describing the value of a range of common GP-referral presumptive diagnoses as a diagnostic test in an ED population.

The aim of the present study was to evaluate the sensitivity, specificity and predictive values of various serious and/or frequently used presumptive diagnoses in a population acutely referred to a Danish ED, and to assess the added value of these diagnoses based on likelihood ratios.

The study was a retrospective cohort study of all registered acute referrals from GPs for admission to the Kolding ED, Region of Southern Denmark, in 2010. The presumptive diagnoses were retrieved from the electronic white board registration system, where the patients’ symptoms or presumptive diagnoses on the day of admission were registered. The length of stay and final discharge diagnosis were also retrieved. All information from the registration board concerning symptoms and complaints was aggregated into 31 major groups as described elsewhere [1]. Patients over the age of 18 years were eligible for enrolment. Inclusion was restricted to patients with a final diagnosis established less than seven days after admission because the final diagnosis may have been influenced by other conditions arising during the hospital stay and because this risk increases with the length of stay. Patients without a referral text or final diagnosis were excluded, as were patients with gynaecological conditions and patients who were self-referred or referred by pre-hospital services without the involvement of a physician.

The present study was a quality assurance study, which involved no contacts with the patients or any intervention, and thus no Danish ethical clearance was required. The study was registered by the Danish Data Protection Agency (2008-58-0035).

According to the interactive screen boards, there were 10,069 acute admissions during the year of 2010. Among these, 196 patients had no referral text and 31 were admitted 2-3 times on the same day; only first admissions were included. We excluded 994 patients whose final diagnosis was untraceable either because the personal identification number was missing or because the time of admission differed between the interactive screens and the patient administrative system. Seven patients who were admitted as paediatric or gynaecological cases were omitted. This left 8,841 acute admissions with a referral text and a final diagnosis within the selected specialties for further analysis (Figure 1). A total of 48% of the patients were men and 52% women. The median age was 59 years (p25-p75: 39-76 years) and the median duration of admission was 30 hours (p25-p75: 17-93 hours). A median time of 11 hours (p25-p75: 0-26 hours) passed from admission to the registration of the final diagnosis.

The number of patients with the eight presumptive diagnoses and the final diagnoses analysed together with the related symptoms or complaints are shown in Table 1. The results of the various calculated screening parameters are presented in Table 2.

The result of the study points towards great variation in diagnostic values depending on the diagnosis. In general, the PPV of the presumptive diagnoses proved to be low. However, when the patients are referred with the diagnoses of pyelonephritis, meningitis and pancreatitis, our analyses suggest that there is a high likelihood that the patients actually have the disease in question and therefore it is important to act according to the referral text. The GP ruling out any of the eight diagnoses has a low predictive value and these diagnoses should, therefore, not be ignored.

For ACS, other studies have shown a sensitivity of 50% [3] and 44% [4], and a specificity of 98% [3] and 97% [4]. In one study, PPV and NPV for ACS were found to be 51% and 98%, respectively [3]. The sensitivity, specificity and PPV differ substantially from the results reported in our study. Only the NPV is comparable in this case. In the study performed by Bösner et al [3], the patients were enrolled by the GP. All patients matching the inclusion criteria and presenting with chest pain were included. In our study, only the patients admitted to the hospital were eligible for inclusion – and therefore our population probably included the ones with the most severe symptoms. This could partially explain the difference in the diagnostic accuracy.

A study examining the diagnostic accuracy for meningitis in the Faroe Islands revealed a sensitivity of 79.7% over a 12-year period [5]. The population consisted of patients from the age of zero years and up. The PPV was 40.6%. The sensitivity was lower, 67.9% among the > 15-year-olds. The sensitivity was 27.9% higher than what we found in our study. This study retrospectively studied cases of meningitis during an epidemic. In this period, there was a higher than normal occurrence of meningitis, which must have increased the awareness of the disease.

Geersing et al showed that the GP only miss 1.4% of patients with DVT, which yields a sensitivity reaching 98.6% [6]. The study compared the strength of a clinical decision rule with the GP’s estimate of the probability that DVT was present. The GPs were informed of this study prior to diagnosing the patient. Since the rule scores and probability estimates by the GP were recorded simultaneously, there is a possibility that the GPs’ estimations could have been influenced by the result of the scores.

In the case of pneumonia, a European study reported the PPV, NPV, sensitivity and specificity of the GP’s clinical judgment to be 57%, 96%, 29% and 99%, respectively [8]. This study included all patients with acute cough in primary care and not only patients referred to hospital. Another study found the PPV to be 80% and the NPV to be 100% [9].

When dealing with serious diseases, it is important that the sensitivity is high. In the case of ACS, PE and DVT, the GPs were only overlooking 20%, 20% and 10% of the cases, respectively. For meningitis, on the other hand, the sensitivity implies that the GPs overlook more than 60% of the cases, but the CI has a wide range from 11-69%. Furthermore, although GPs do not refer all patients with meningitis to the hospital with that specific tentative diagnosis, they did refer these patients to the hospital based on a clinical examination. The patient is not missed, but merely referred to the hospital since the GP acknowledges the seriousness of the patient’s condition. It is well known that meningitis can be difficult to diagnose in the early stages.

In our study, the GP failed to diagnose pancreatitis in 63% of the cases. Nevertheless, it is still important to bear in mind that the patients were referred to the hospital for further investigation.

When the sensitivity is high, the positive predictive value is equally low. The more patients examined for a given disease, the more likely it is that those few who actually have the disease will be diagnosed. When the GPs are working with limited access to diagnostic tests, a high number of patients must be referred, which results in many false positive diagnoses.

The negative predictive values are expectably high given the large size of the population included in the study.

A main limitation of the present study is that the specificity, negative predictive values and likelihood ratios will vary with the total population included; and we therefore encourage a cautious interpretation of these values in our study. For the calculated diagnostic values to be reliable, the discharge diagnoses must be so, too. Hence, there is a source of error depending on the degree of reliability of the registered discharge diagnoses. The sensitivity and specificity of the diagnostic gold standards for the different diseases are also of great importance in this context. Pneumonia is sometimes registered as the final diagnosis without the finding of bacteria in the expectorate and/or with uncharacteristic findings on X-ray which leaves a source of error due to diagnostic inadequacies. The information of presumptive diagnoses and presenting symptoms was retrieved from the electronic, interactive white board registration system. This information was registered by a nurse after reading the referral from the doctor and the information relies on the nurse’s interpretation of the referral. The GP may have stated important information or findings not registered by the nurse.

This was a single-centre study and the utility of our results is limited to populations with a composition that resembles that of the included population. Thus, variation will likely occur when comparing with other hospitals and regions. We also made the assumption that when the GP did not refer a patient with a presumptive diagnosis, the GP had excluded the diagnosis in question. For instance, if a GP referred a patient with headache and/or fever, we assumed that the GP did not suspect meningitis unless the referral text specifically indicated meningitis. Finally, we made a choice as to which symptoms should be included as typical symptoms of a diagnosis based on clinical experience. Other physicians may have chosen to include or exclude differently.

The strength of the study is that while the majority of studies on this matter focused on one specific diagnosis, we here investigated the diagnostic value of several diseases encountered in the ED at the same time.

Our study shows that it is advisable to include the information concerning presumptive diagnosis on the referral from GPs concerning meningitis, pyelonephritis and pancreatitis. In the remaining cases, it is preferable to act according to the presenting symptoms. Furthermore, it is important not to discard any of the included presumptive diagnoses even if the GP does not suggest that they should be considered on admission. 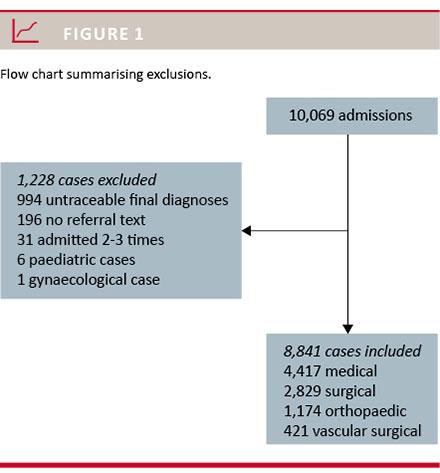 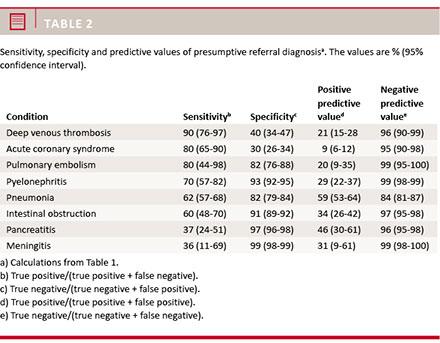 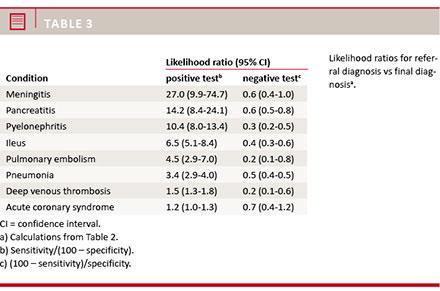 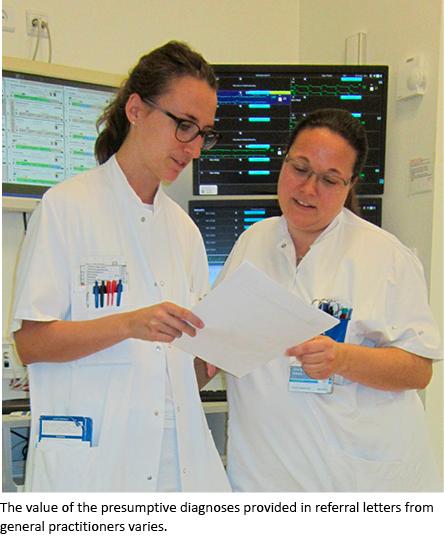