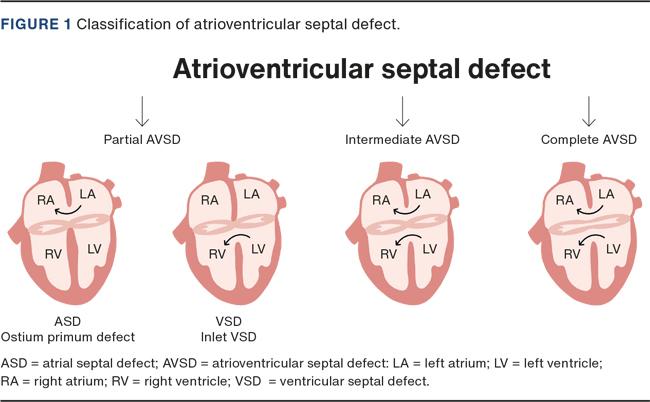 Transitional AVSD is characterised by a primum ASD combined with a VSD, with two separate atrioventricular valves. Just like the transitional form, complete AVSD involves the combination of an ASD and a VSD, but with the valves fused into one common AV valve.

AVSD stands out as being the most common type of CHD among DS births, where 65% are diagnosed with complete AVSD, whereas partial AVSD is seen more often in non-chromosomal AVSD cases [3].

In 2004, the Danish Health Authority implemented a new guideline on prenatal screening [4]. The guideline recommends that all pregnant women in Denmark should be offered a combined first-trimester screening. The scan includes a risk assessment for chromosomal anomalies and its purpose is to obtain knowledge about the health of the foetus and to give the parents the best possible basis upon which to choose whether they want to continue or terminate the pregnancy in case of chromosomal abnormalities. In the second trimester, women are offered a second trimester scan which includes examination of the foetal organs, including the heart.

The aim of this study was to describe the impact of changes in prenatal screening programmes on the live birth prevalence of AVSD on the island of Funen, Denmark.

This was a registry-based descriptive analysis based on data from the EUROCAT Registry of Congenital Malformations for Funen County, Denmark. EUROCAT is a European network of population-based registries for epidemiological surveillance of congenital anomalies. The EUROCAT central database includes data on births and termination of pregnancy covering 29% of the European birth population [6].

Data sources for the EUROCAT registry for Funen County were hospital records (obstetric and paediatric departments), birth and death certificates, post-mortem examinations and chromosomal data from the department of genetics. All live births, foetal deaths with a gestational age (GA) > 20 weeks and terminations of pregnancy at any GA were included in the registry.

For AVSD and DS, the following variables were extracted from the database: birth type (live birth, stillbirth, termination of pregnancy for foetal anomaly (TOPFA)), time of diagnosis (prenatally, after birth or unknown), GA at prenatal diagnosis, karyotype and one-week survival.

Furthermore, data on AVSD were divided into partial and complete AVSD and compared on chromosomal status (chromosomal or non-chromosomal) and time of diagnosis.

Statistical testing was made using the χ2-test and Fisher’s exact test with the level of significance set at 0.05.

The study is based on existing anonymised registry data and did not require ethical committee approval for access or publication.

Sixty cases of AVSD were registered between 1990 and 2018. The total number of births in the same period was 153,757 and the corresponding total prevalence of AVSD was 3.9 per 10,000 births. Livebirths were registered in 50 cases (83%), stillbirths in one case (1.7%) and TOPFA in seven cases (11.7%). Furthermore, data showed that 24 cases (40%) had associated chromosomal anomalies, and 36 cases (60%) had no diagnosis of a chromosomal anomaly. Among all cases, 28% were diagnosed prenatally with an average GA at diagnosis of 23.5 weeks.

Prevalence of Down syndrome

Between the two time periods, the total prevalence of DS increased from 16.2 to 26.3 per 10,000 births, with an average GA at the time of discovery of 13.7 weeks. Data showed a significant increase in prenatally diagnosed cases and TOPFA cases (p-value < 0.0001), leading to a 41% decrease in live births with DS (Table 2).

Genetic and teratogenic syndromes accounted for 12% of all AVSD cases and 19% of the non-chromosomal cases. With one syndrome as an exception, associated malformations were represented in all the remaining syndromes.

The majority of all liveborn infants with AVSD were still alive after one week, and the one-week survival rate among live births was 94%.

In the present study, we found that: i) after implementation of the new prenatal screening guidelines in 2004, prenatally diagnosed cases of AVSD increased by 83%, ii) TOPFA increased significantly after 2004, iii) half of the cases in which TOPFA was performed were chromosomal cases, iv) live births among infants with AVSD decreased by 21%, v) despite a 61% increase in the total prevalence of DS, the live birth prevalence decreased by 41% due to TOPFA.

In an increasing number of cases, the parents’ decision included TOPFA. Data showed a significant increase in TOPFA cases, even though these results are limited due to several factors. First, along with other CHD, cases of AVSD may be missed and go undiagnosed in perinatal deaths without a full autopsy. Second, AVSD is highly associated with chromosomal anomalies, especially DS. Chromosomal anomalies are often diagnosed earlier in pregnancy, occasionally before a possible CHD, which means that an unknown number of AVSD cases will presumably never be diagnosed because of an increased number of early terminations de to the diagnosis of DS. Even though the prevalence of DS increased from 1990 to 2018, the prevalence of live births decreased due to a significant increase in prenatally diagnosed cases and cases of early TOPFA, which probably affected the prevalence of AVSD. The potentially undiagnosed cases of DS with AVSD will also have an impact on the recorded distribution of chromosomal and non-chromosomal cases with AVSD.

The increase in prenatally diagnosed cases may possibly be explained by the large screening participation of pregnant women in Denmark combined with the development of equipment and an opportunity allowing for more detailed anatomy screening over time. Even so, more than half of all AVSD cases between 2004 and 2018 were diagnosed after birth, which is consistent with the prenatal detection rate below 50% described by Allan [7]. The distribution of partial and complete AVSD may affect our results, since cases of partial AVSD were more difficult to diagnose by ultrasound, probably due to the less extensive change in anatomy and the varying level and degree of shunting.

The overall prevalence of AVSD was 3.9 per 10,000 livebirths, which is lower than results previously published, but close to the findings by Miller et al. (3.7 per 10,000) [8, 10, 11]. Of note, several of the studies based their prevalence on live births only and are thus not directly comparable to the total prevalence reported herein, which included TOPFA and stillbirths.

In total, 17 out of 60 AVSD cases (28%) were diagnosed prenatally, which is similar to the findings by Heide et al. who reported 29.3% prenatally diagnosed cases [12]. Results from other studies have ranged from 67% to 91%, but the total number of AVSD cases in these studies was also considerably lower than in our study [13-15]. Since our study is based on data from Denmark, it should be taken into account that these studies are from other countries that may have different guidelines for prenatal screening.

Over time, the short- and long-term survival among infants with AVSD has increased; and today, more than 90% are still alive after ten years of life [17, 18]. The main reasons for this are improvement in surgical techniques, postoperative management and echocardiographic imaging. It is therefore important to consider the ethical aspects of the termination of non-chromosomal AVSD cases; in particular due to the enhanced possibility of a successful operation. The probability of associated malformations among non-chromosomal cases is high, and the severity of the malformations combined with possible complications and reoperation are worth considering.

Furthermore, our results might be difficult to compare globally, since they are based on the Danish healthcare system, including free access to healthcare including screenings during pregnancy, and surgery, if necessary. Although the 2004 guidelines were rolled out nationally, it is important to underline that parental decision making may differ between geographical regions.

Finally, during the 28 years of study, significant improvements in the quality of echocardiographic imaging have been made, which is important for the comparability of data between the two periods. To confirm our results, a more comprehensive study based on a larger sample size is warranted.

As a result of the implementation of the prenatal screening programme in 2004, prenatally diagnosed cases of AVSD increased, although not statistically significantly so. A significant increase in cases of TOPFA was found with no difference in the distribution of chromosomal or non-chromosomal status, leading to a 21% reduction in liveborn infants with AVSD.