Metaanalysis of risk factors for mortality in patients with hip fracture

Hip fracture constitutes a worldwide public health problem among the elderly [1]. The most common cause of hip fractures is low-energy trauma combined with osteoporosis, and is most frequently seen in elderly women.

Numerous studies have explored the impact of different factors on the outcome following a hip fracture, such as admission blood tests, co-morbidities, clinical score systems etc. [3, 10-23].

If we are able to identify high risk patients, treatment can be optimized and outcome might be improved. If such identification can be performed by the use of simple clinical score systems, it will be an easily accessible tool for adjusting and specializing treatment. It would furthermore be an inexpensive and quickly performed assessment, which would be highly useful for clinicians.

In this metaanalysis we chose to focus exclusively on simple bedside tests and their ability to predict mortality in hip fracture patients. Thus, we chose score systems containing parameters directly observable in the patient or parameters derived from questionnaires. Score systems containing paraclinical data such as blood tests or requiring the use of highly technological equipment in general were thus excluded.

Three clinical score systems, the American Society of Anesthesiologist score (ASA), Charlson Comorbidity Index (CCI) and dementia score (MMSE: Mini Mental State Examination) (Table 1) met the inclusion criteria, and the aim of this metaanalysis was to assess the association of these score systems with mortality in hip fracture patients.

The PRISMA guidelines for metaanalyses were followed [24].

A search for articles in the Medline Database using PubMed was conducted on November 13, 2011. The string, used for this search, consisted of three concepts, as shown below:

II. (mortality OR death OR fatal* OR survival)

III. (ASA OR “ASA score” OR “American Society of Anesthesiologists”).

The last concept was constructed to search for the three score systems individually, thus resulting in three different search strings, one for each score. ASA is shown as an example:

Articles were chosen through an iterative process; headlines and abstracts were screened and articles found relevant were reviewed in full text version. The reference lists of the selected articles were screened, and the service “related citations” in PubMed was applied, to find additional publications and additional words for the search strings. The selection process was repeated three times. The search yielded a total of 315 publications.

The publications were further sorted based on the inclusion criteria (English language; full-text editions electronically available at the Royal Library of Denmark; study population larger than 100 subjects; trial population of mixed gender; trial duration less than or equal to two years).

Figure 1 shows the search which resulted in the inclusion of thirteen studies [3, 10, 12-22]. Essential characteristics, including clinical score system, number of studies included, number of study participants and average days of follow-up, are listed in Table 2 (n = 14, some of the included studies evaluated more than one clinical score system).

Odds ratios (OR) with matching 95% confidence intervals (CI) were calculated for the individual studies as described by Bland and Altman [25], using a contingency 2 χ2 table. p-values were calculated using χ2. p < 0.05 was considered significant.

The calculations were conducted with Microsoft Office Excel 2007.

Review Manager (RevMan), developed by the Cochrane Collaboration, was used to carry out the systematic review [26]. The standard errors and ORs were plotted in a funnel plot to create a visual aid for the detection of any systematic heterogeneity or publication bias, also known as Egger’s test [27].

The I2 statistic was used to evaluate the degree of dissimilarity between the individual studies. I2 describes the percentage of inconsistency between studies that is due to heterogeneity rather than sampling error [28]. I2 > 50% was used as a threshold, indicating high heterogeneity.

Table 2 shows the characteristics of the studies in the analyses, including first author, clinical score system, important demographics, length of follow-up, design of studies, ORs and p-values.

In the funnel plots, the data were distributed equally around the vertical axis, implying no presence of publication bias (not shown).

In both the ASA and CCI analyses, statistical dissimilarities were absent, evidenced by I2 = 0%. This indicates full homogeneity, and a fixed effect analysis was therefore chosen.

The dementia analysis showed high statistical heterogeneity with an I2 of 64%. This suggests that the studies might not have a common effect size. Differences in outcome are more likely to result from variance than from pure chance. Thus the random effect model was used. With this model, each study is weighted equally. It will further incorporate greater variability, resulting in wider confidence intervals [29].

Besides statistical heterogeneity, the studies are to some extent different with regard to design and the type of personnel carrying out the tests.

Three studies were included in the analysis dealing with the Charlson Comorbidity Index. 38.6% of the patients scored one or more on the CCI (Figure 2). The results showed no statistical heterogeneity, I2 = 0. All studies had an OR above one, but only the studies by Franzo et al and Nielsen et al showed statistical significance with a p value below 0.0001.

This metaanalysis has found all three clinical score systems to be of prognostic value for mortality in hip fracture patients.

The patients with premorbid dementia demonstrated an almost three times greater mortality compared with non-demented patients, with the statistically significant (p = 0.0001) OR of 2.73 (95% CI 1.64-4.57).

However, the analyses of the CCI and dementia do not comprise many studies. It would, of course, be preferable to re-analyze the two score systems and their relation with mortality in hip fracture patients when more studies are available. Furthermore, different methods were used for the assessment of dementia, MMSE or journal extraction. It would be useful for future studies if the same diagnostic methods were used and were well documented in the papers as well.

With the help of these three bed-side clinical score systems, the clinicians can perform a rapid and inexpensive assessment of their patients and and increased risk of dying without needing paraclinical tests to optimize care and treatment.

In this metaanalysis we were interested in investigating the sole effect of the clinical score systems on the assessment of mortality. Nevertheless, the clinical score systems can easily be combined with other types of risk assessment methods, thereby potentially improving the assessment. Some studies have alone focused on the effect of paraclinical tests, others have combined paraclinical tests with clinical score systems. Markers, such as haemoglobin, albumin, total leukocyte count, creatinine and parathyroid hormone in admission blood tests, can be used as significant outcome predictors in hip fracture patients [11, 23].

Other scoring systems with a proven predictive value do exist, but they require additional investigations such as blood samples, X-rays etc.

The Nottingham Hip Fracture Score (NHFS) is a scoring system validated for the prediction of 30-day mortality after hip fracture surgery [32]. It is made up of seven independent predictors of mortality that have been incorporated into a risk score: age (66–85 and ≥ 86 years); sex (male); number of co-morbidities (≥ 2), admission mini-mental test score (≤ 6 out of 10), admission haemoglobin concentration (≤ 10 g × dl-1), living in an institution; and the presence of malignancy [33]. The NHFS uses data that are easily and routinely collected from all patients presenting with hip fractures. The NHFS can be calculated on admission to hospital [33].

The physiologic and operative severity score for the enumeration of mortality and morbidity (POSSUM) system predicts mortality and morbidity in surgical patients using physiologic and operative factors [34]. This system has also been presented in a modified version for orthopedic use that has been validated for patients with femoral neck fractures [35]. The POSSUM requires surgical and anaesthetic data [34] and in some studies the orthopedic POSSUM scoring system has been shown to over-predict mortality in patients with hip fractures [36, 37]. However, it has been pointed out that this may be due to the method of analysis used in these studies [35].

These scoring systems, however, remain complex and it can be difficult to single out the effect of each of the individual components comprised by the systems. This metaanalysis therefore focused on individual clinical scoring systems allowing for differentiation of care, e.g. in assigning the patients to specialized orthogeriatric units.

The functional outcome in hip fracture patients can further be optimized by combining the orthopaedic surgeon’s and the geriatrician’s expertise this has yielded a significant reduction of the overall length of hospital stay while still maintaining a high quality of care [38, 39].

Furthermore, ongoing adjustments in treatment may be conducted on the basis of the simple clinical score systems.

Moreover, the rate of postoperative complications and mortality may be reduced by using an optimized hip fracture treatment, i.e. a fast-track programme, where improvements such as a more efficient pain treatment and reduction of time to surgery are applied [40].

Factors such as functionality (New Mobility Score, Cumulated Ambulation Score), type of fracture, type of surgery, time to surgery and the geriatric follow-up are other possible predictors of mortality in hip fracture patients [41, 42].

A future study of interest is one that looks at all factors: paraclinical parameters, bedside clinical scoring systems, co-morbidities, logistical parameters such as waiting times for surgery and medication consumption and the correlation with mortality in hip fracture patients in a large patient material. 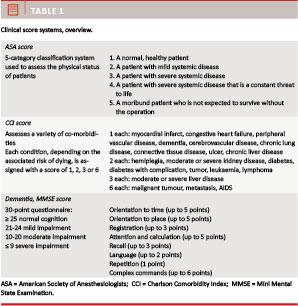 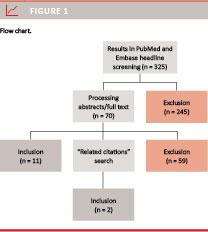 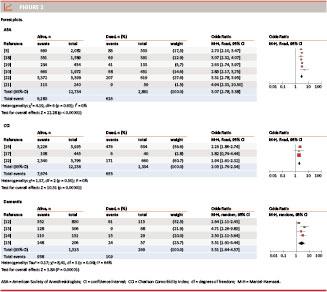 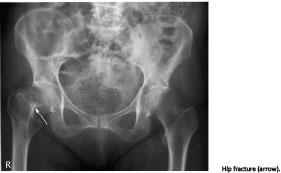