A nationwide analysis of socioeconomic outcomes after hip and knee replacement

Total hip and knee replacement (THA and TKA) are two of the most common and successful operations, based on several patient-reported outcomes [1, 2], ability to return to work and physical activity [3-5] and socioeconomic benefits based on perioperative cost analyses compared with gains in quality of life (QALY) [1, 6] and no operation [7]. However, these overall benefits must be balanced against the fact that about 15% of patients have persistent moderate to severe pain [8] and increased use of analgesic agents [9] and the fact that a fraction of younger patients is unable to continue working [3].

During the past decade, improved anaesthetic and opioid-sparing analgesic techniques have facilitated early post-operative mobilisation and discharge to home within 2-3 days [10] thereby adding to the cost effectiveness of TKA and THA. However, documentation of the optimal pre- and post-discharge rehabilitation technique has yet to be provided [11], thereby hindering exact assessment of future total healthcare costs.

Using the unique Danish socialised healthcare system with detailed registers on various health sector costs, social costs, prescriptions, productivity and labour market incomes and employment data, we performed a total cost analysis before and after surgery. The aim of this large nationwide study was to assess in detail the total healthcare costs from up to 12 years before and after THA and TKA compared with a matched reference population of un-operated citizens.

All individual data from public and the few private hospitals, physician office visits (GPs and other practicing specialists), prescription of medication, home care, social transfers, labour market income and employment data are registered in central databases. Furthermore, all patient contacts with the hospital system are recorded in the National Patient Registry (NPR). This study consists of patients who have received primary TKA and primary THA with the International classification of Diseases, version 10 (ICD-10) procedure code KNGB20/KNGB30/KNGB40 (knee) and KNFB20/ KNFB30/KNFB40 (hip) between 1998 and 2011. In the year of the operation, we identified all citizens with the same age, sex and civil status who resided in the same area of the country as the patients in the Central Population Register, and randomly selected four unique reference persons who were not in the patient groups. Patients and references were identified in the NPR database and merged with data from the DRG, the National Health Insurance Service Registry, The National Prescription Registry, the National Income Statistics and the Coherent Social registry. If a patient or a matched control subject could not be identified in the income statistics or the coherent social statistics, the person was excluded from the analysis that year. Reasons for exclusion could be: active soldiers on overseas duty, expats and imprisoned subjects. Exclusion was only a minor problem as the data completeness for all years was over 99%. Patients and references who were not alive were excluded from the analysis of the yearly costs to avoid bias in the economic estimates. Patients and the matched reference population were followed for a maximum of 12 years before and after the time of surgery. On average, TKA and THA patients and the reference population were followed for 7.7 years and 7.0 years before the operation and for 4.7 years and 5.1 years after the operation, respectively. The economic costs were divided into healthcare costs (outpatient services, inpatient admissions, prescription drug costs and physician office visits) and costs to home care and productivity costs (employment rate and income) and social transfers. Differences in cost per patient year were calculated as an average annual excess cost per patient year relative to the matched reference population. As data about use of home care was only registered on a national level since 2009, the preoperative period is relatively shorter than for the other cost categories. All costs were inflated to 2012 prices (to facilitate comparison over time) and shown in €.

The study was approved by the Danish Health and Medicines Authority and the Danish Data Protection Agency (record number 11-88-37-39). Data were handled without revealing the identity of any patients or control subjects, so neither individual nor ethical approval was required. The register study was not registered with ClinicalTrials.gov.

More TKA patients than reference population citizens were treated in outpatient clinics, were hospitalised, used medication and had physician office visits preoperatively (Table 1). The total healthcare costs increased at the time of operation and continued to be higher compared with the matched references (Figure 1).

Only about 5% of the increased inpatient costs after the operation were related to reoperations. The increased use of medication was evenly distributed among all therapeutic groups except for agents for muscular diseases where the operated patients used less medicine than they had done preoperatively. Patients aged ≤ 60 years had slightly higher post-operative excess health expenses relative to the matched references than patients aged > 60 years.

Post-operative survival in THA and TKA patients was slightly higher for patients than for matched references (Figure 1, Figure 2).

This study is the first detailed and nationwide analysis of total healthcare costs with long-term data before and after THA and TKA compared with a matched reference population. However, matching was performed on socioeconomic data and did not include co-morbidities. The study is unique in that the Danish registers on costs related to hospitals, general practitioners and specialist, prescriptions, home care, social transfers, labour marked income and employment data are available on a nationwide basis. In previous studies, costs changes have been modelled on data pooled from different populations and countries. Thus, Losina et al [13] used a Markov model to estimate increased lifetime healthcare costs of 20,800 $ per TKA patient ≥ 65 years. The higher costs in our study may be explained by a different health system, age groups and a different methodology, but also by the fact that Losina et al assumed that a successful TKA reduced direct medical costs, which may not be the case as shown in our study. However, our use of actual healthcare spending has the advantage that such assumptions can be avoided. The same conclusions were made with a theoretical Markov model in young patients after TKA and compared to no operation [14].

Our results showed that all-over healthcare costs increased annually after the operation both regarding costs relating to outpatient services, inpatient admissions, expenses for prescription drugs and physician office visits and costs derived from homecare, sick pay, disability pension, age pensions and other public transfers. Conversely, income from employment decreased and patients retired earlier than references. These trends were similar for both THA and TKA patients. The healthcare costs were higher than those of the matched references. Specifically, costs increased by about 7,000 €/year after TKA compared with about 5,600 €/year after THA compared with the matched references (p < 0.001).

Obviously, these somewhat disappointing socioeconomic results should not be taken as an argument against performing THA and TKA since widespread documentation for the benefits of these operations is available based on several types of patient-reported outcomes (PROM) [1]. Furthermore, they have been shown to be cost effective on QALY scores regarding short-term perioperative costs [2]. However, despite improvement in PROM, many functional data are not completely regained although they are improved compared with preoperative levels [4, 15, 16], which supports our findings of increased late post-operative healthcare costs.

Despite the positive PROM data, these must also be balanced against the well-documented problem with persistent pain in 10-20% [8] and an increase in post-operative use of analgesic drugs reported in a large-scale French study [9]. Also, a small fraction of younger patients may not be able to return to employment or may even be disabled after total joint replacement [3]. In addition, there is a well-documented need for revision after ten years in about 5-10% patients after THA and TKA due to persistent pain problems, mechanical prosthesis-related problems, infections, etc. Finally, although rarely documented in detail, there are expenses relating to rehabilitation, even though the evidence for optimal recovery intervention has not been established. Consequently, future research is required on the indication and optimal type of physiotherapy.

Pooling data over time for patients and matched references has the advantage that average costs can be followed for a longer period both before and after the operation. However, if the effect of the treatment or the patient populations changes during the study period, the average estimates before and after the operation may not be representative for the full population. Nevertheless, the pre- and post-treatment cost estimates remained stable over time both for different patients types and for matched references, which suggests that this problem is minor.

Our findings with respect to the total and fractional long-term health cost analyses together with the otherwise documented problems of persistent pain, reduced return to employment and rehabilitation expenses will obviously require more detailed studies to determine which patients benefit and which do not in order to provide better indications for surgery and pre- and post-operative strategies for pain management and rehabilitation [17]. So far, the data have shown that patients with a preoperatively decreased mental health status, pain catastrophising and lower socioeconomic status do less well post-operatively [18, 19]. Also, long-term outcomes may depend on patient expectations [17], especially in relation to preoperative information, which should be realistic and not overoptimistic. In addition, the demonstrated increased healthcare costs after joint replacement may not be unexpected since it is well-established that non-operated patients with knee osteoarthritis have an almost two-fold increased risk of sick leave and about 50% increased risk of disability pension compared with the general population [20]. Ideally, our control group should have been osteoarthritis patients with the same complaints and disability as our operated patients groups. However, this was not feasible since those with severe disease will be operated in usual clinical practice. Although our comparison with matched references therefore can be criticised, the finding of a continuous increase in healthcare costs in the total group of patients after joint replacement is of interest since the operation was performed due to pain, disability, and with a view to achieving return to employment and other social activities to the extent possible. Despite the lack of data of unmeasured co-morbidities potentially reflecting the increased costs, these could not be explained by a decreased survival (Figure 1, Figure 2).

The strengths of this study are the unique details on a nationwide basis regarding different types of healthcare costs for several years before and after THA and TKA. These results are unique and have not been reported before due to a lack of similar registration systems in other countries.

The obvious limitations are due to the lack of specific preoperative patient demographics except for healthcare costs.

This first detailed socioeconomic long-term study including several pre- and post-operative years in patients undergoing THA and TKA shows a significant annual increase in all aspects of healthcare costs post-operatively compared with an age- and socioeconomically matched reference population. These data should be taken into account for future, more detailed, studies of patient advice, expectations and strategies for enhanced rehabilitation.

Acknowledgements: This study was performed in collaboration with the Lundbeck Foundation Centre for Fast-track Hip and Knee Replacement, Copenhagen, Denmark. No competing interest declared. 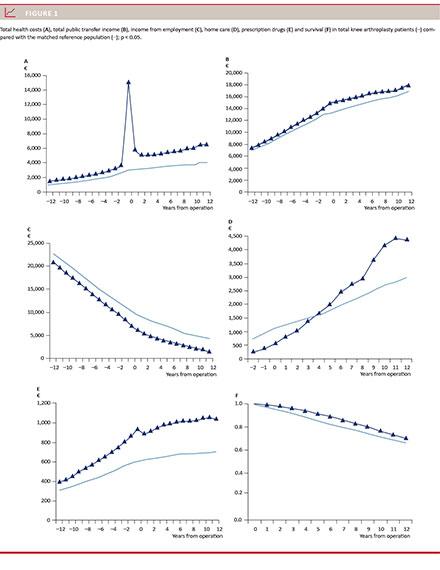 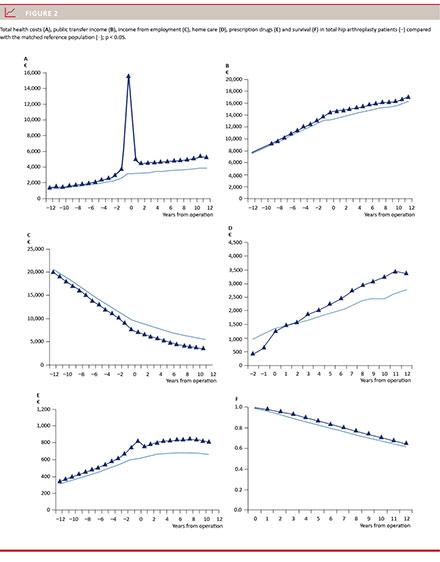 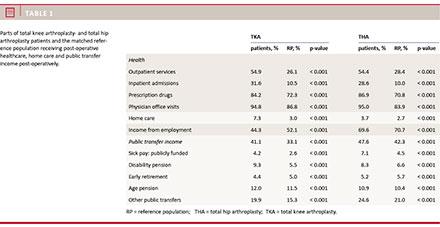 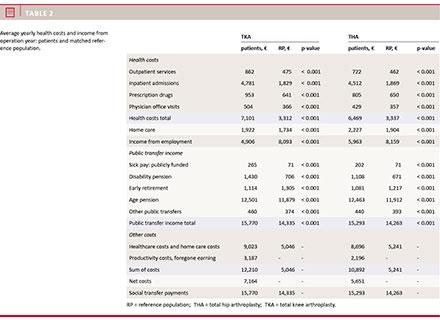