Recent years have seen an increase in the recreational use of new designer drugs. In 2010, a new potent

class of hallucinogenic drugs called N-benzylmethoxy (NBOMe) emerged on the drug market, and it is now readily available in online shops. Since 2010, several case reports worldwide have documented severe poisonings and even fatal overdoses [1-4]. A fatal overdose was reported in a Danish case report in 2015, when a young male exposed to NBOMe and amphetamine presented unconscious with generalised seizures and renal failure and died ten hours after admission despite maximal treatment at an intensive care unit [3].

The NBOMEs were originally synthesised for research purposes as potent agonists of the 5-hydroxytryptamine (HT)-2A-receptor [14] and are derivatives of the 2C series of hallucinogenic drugs [15]. The name comes from an added N-benzylmethoxy substituent (OMe is chemical shorthand for methoxy). This added NBOME group has been shown to significantly increase the compound’s affinity for the 5-HT2A2-receptor, mediating the hallucinogenic effects that are similar to those of LSD, but the NBOMe have greater stimulatory properties because of α1-adrenergic receptor interactions [16].

They are sold on blotter paper in sizes down to

0.5 × 0.5 cm or as powder and require very small doses (200-1,000 microgram) depending on the route of exposure, which increases the risk of overdosing. According to an online survey, the most common route of administration is swallowing, sublingual, buccal, tab on tongue or similar (81%), although a minority (18%) reported nasal insufflation with a modal time to reach peak effect of two hours for oral/sublingual/buccal intake and 45 minutes for nasal administration, and with a duration of effect of 3-13 hours [5].

The NBOMe blotter paper is often referred to as “postage stamps” (frimærker) or “smiley paper” and sells at very low prices in the range of 3.5-4.0 USD per stamp [17]. Since the effects are similar to those of LSD, the blotters are often sold as the more expensive LSD, leading users to unwittingly ingest the more dangerous NBOMe [4, 8, 9].

The aim of this study was to describe the suspected NBOMe exposures reported to the Danish Poison Information Centre (DPIC).

Data were extracted from the database of the DPIC which is a nationwide poison centre that provides 24/7 telephone guidance about poisoning emergencies for citizens and healthcare workers alike.

A search was performed in the DPIC database for

all NBOMe exposures reported from 1 January 2013 to 30 June 2016. Cases included all enquiries regarding NBOMe exposures, regardless of exposure to other substances or failure to provide all information requested by the DPIC. Academic inquiries not related to specific exposures were excluded. The following data were included: age, sex, date of exposure, risk assessment,

This study was approved by the Danish Data Protection Agency (BFH-2016-070/04985). Anonymised, retrospective register studies do not require ethical approval or written informed consent according to the Danish Act on Processing of Personal Data.

A total of 43 cases were included. Distribution by year is presented in Figure 1. 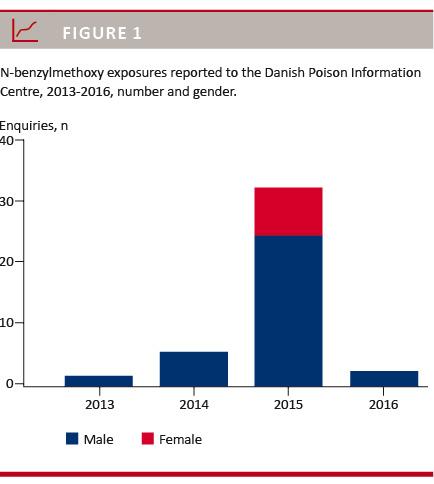 Of the 32 cases in 2015, 22 were reported in the first six months and only ten cases in the last six months. The mean patient age was 21 years (range: 15-34 years). A total of 32 (74%) cases were male and 11 (26%) cases were female. In all, 41 (95%) of the cases were reported to be intentional recreational use, whereas two (5%) cases were reported to be suicide attempts. A total of 37 (86%) of the exposures occurred at the patient’s residence, whereas six (14%) exposures occurred in a public area. Three patients were assessed by the DPIC to be at risk of life-threatening poisoning, 35 patients were at risk of manifest poisoning, four had an undeterminable risk and one was at no risk of poisoning. The clinical adverse effects are presented in Table 1. 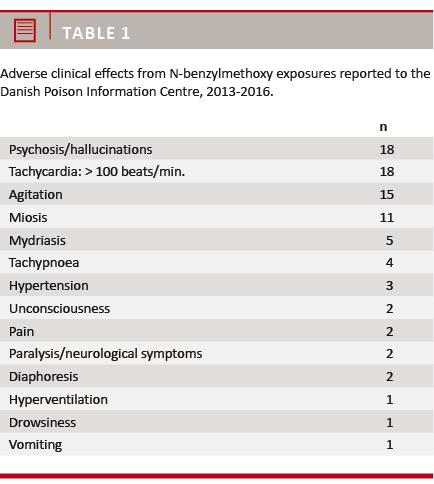 The most frequently reported symptoms were psychosis/hallucinations (n = 18), tachycardia (n = 18) and

exposure to other substances, and some had multiple co-exposures. The most common co-exposure was alcohol (n = 9) followed by cannabis (n = 7), amphetamine

(n = 5), cocaine (n = 3), benzodiazepines (n = 1) and methylenedioxymethamphetamine (n = 1). One of the cases with concomitant exposure to amphetamine was reported to have died. Geographical location is presented in Figure 2. 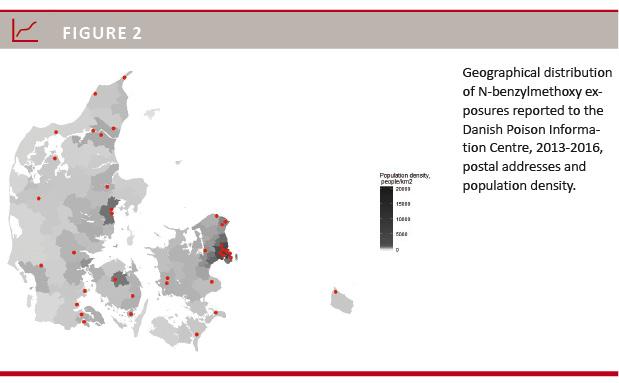 (Copenhagen, Aarhus and Odense), whereas 28 patients had postal addresses outside these three cities. For five patients the postal address was unknown. In five cases, admission to an intensive care unit was advised; in 32 cases, admission to the hospital was advised; in five cases, the caller was advised to seek an emergency room; and in one case, the patient had already been discharged. In all cases, symptomatic treatment was recommended.

With a total of 43 exposures, we have shown a steep

areas, suggesting that these drugs are readily available across the country. In most of the cases (86%), the exposure occurred at the patient’s own residence, whereas only 14% occurred in a public area. This is consistent with the impression the authors get from online public forums, where anonymous users exchange information and experiences regarding dose suggestions and the hallucinatory and euphoric properties of different NBOMe. In the 14% of exposures that occurred in a public area, the locations are not further specified, but media reports have shown a wide prevalence at gatherings such as techno parties. A total of 16 of the patients had co-exposures to a variety of other drugs. Of greatest concern are the concomitant exposures to other stimulatory drugs. One such patient suffered from a fatal overdose due to combination with amphetamine.

Considering the short period that has passed since these drugs entered the Danish drug scene, the number of reports of serious adverse effects to the NBOMe gives rise to great concern. Possible explanations for this alarming rise in NBOMe poisonings include great availability and very low prices. The NBOMe blotters are extremely small making them easy to transport and smuggle unnoticed. Another explanation is that the blotters are often sold as the more expensive LSD, leading users to unwittingly ingest the more dangerous NBOMe [4, 8, 9]. Studies on NBOMe detection suggest great inhomogeneity in drug dosages even within blotters on the same blotter sheet [18], presumably because the drugs are produced in amateur labs. Combined with the high potency of these drugs, this further increases the risk of poisonings. This uncertainty of drug and drug dose is

reflected in the DPIC risk assessments. In all cases but one, in which the patient had already been discharged, the DPIC advised the patients to seek immediate medical care. Even users who thought they had ingested LSD, but presented with a more sympathomimetic toxidrome, were advised to seek immediate medical care out of fear that they might be intoxicated with NBOMe.

Study limitations: Firstly, the included NBOMe exposures have not been toxicologically confirmed, and some of the reported exposures may, in fact, not have been NBOMe. Future studies of NBOMe exposures would benefit from a systematic collection of the confiscated blotter papers with subsequent measurements of the content of NBOMe. Also, a blood sample should be collected from the patient and the NBOMe should be measured in plasma. Secondly, exposures reported to the DPIC may not reflect actual usage as reporting to the DPIC may be biased by several factors, including public awareness of the NBOMe and awareness of the DPIC services. Increased awareness among the DPIC staff of NBOMe poisonings may have resulted in over-reporting of NBOMe suspected exposures. The observed increase in reports in 2015 may possibly be explained by this phenomenon. In contrast, under-reporting of NBOMe cases due to unspecific symptoms not associated with this illegal drug may have been the reason for very few or absent reports prior to 2013. In addition, this study did not include route of exposure or the dosage of drugs, which makes it difficult to ascertain whether the adverse effects are dose or route dependent. Most often, the DPIC could not obtain all the desired information on symptoms, and the DPIC does not routinely make follow-up calls, but the most frequently reported adverse health effects, i.e. psychosis/hallucinations, tachycardia and

agitation, are consistent with the toxidrome of neuropsychiatric and autonomic symptoms described in case series mediated by the affinity to the 5-HT2A receptor and the α1-adrenergic receptor.

The literature on NBOMe intoxication management is limited, but suggests symptomatic management with intravenous fluids, benzodiazepines and mechanical ventilator support when indicated [4, 15]. The clinician should also keep in mind that a patient presenting with hallucinatory symptoms after ingesting what is thought to be LSD or drugs in the 2C family may, in fact, suffer from NBOMe poisoning.

Future studies will reveal whether the declining incidence that we have seen since mid-2015 continues, and whether or not this is a decline that is specific to Denmark. To the best of our knowledge, our study is the first study showing an incipient decline in incidence. The NBOMe drugs have seen much negative press focused on the dangerous side effects in the Danish media as well as on the social media and by public advocacy groups. If the decline does continue, it would be interesting to do a survey among users to establish the cause of this decline.

We have shown a steep and sudden increase in suspected NBOMe exposures reported to the DPIC since 2013. The reported exposures were evenly distributed across the entire country, and the patients most commonly presented with clinical effects such as psychosis, tachycardia and agitation. Our results, however, also suggest an incipient decline in reports of Danish NBOMe exposures.

Conflicts of interest: Disclosure forms provided by the authors are available with the full text of this article at www.danmedj.dk