Work-related adjustment disorder (WAD) or “stress” is one of the costliest disorders of modern society and a major cause of lost earnings in the Danish corporate sector [1]. A rising WAD prevalence is the companion of a high occupational frequency [2]. Reports demonstrate a clear correlation between psychosocial stressors in the work environment and mental disorders, including dementia [3] and cardiovascular disease [4, 5]. Scientifically validated analyses point to job insecurity, lack of influence on own work situation and failing support from management and colleagues as the prevailing causes of this condition [6]. The pathology of stress is largely unknown in terms of the underlying neurobiology, other than that of stress hormones, and there is a shortage of studies exploring any links among psychosocial work stressors, brain metabolism and signal transmission.

The major reward substance dopamine (DA) appears to be crucial to reward and motivation, but DA neurotransmission in the prefrontal cortex has been shown also to play an essential role in mediating executive functions [7, 8]. Executive functions are the basis of competencies favoured by modern society, including motivation and learning – and executive abilities such as planning, focus, concentration and problem solving. The dopaminergic structures underlying these functions are the mesolimbic and mesocortical DA pathways (Figure 1), referred to jointly as the mesocorticolimbic projection. The mesolimbic DA pathway is the primary neural network of reward, and it connects the ventral tegmental area (VTA), a principal DA-producing site in the brain, to the nucleus accumbens, a site below the ventral striatum that is strongly associated with motivation and reward anticipation [9]. The mesocortical DA pathway passes from the VTA to the cerebral cortex as part of the reward circuitry that is active during cognition and executive decision-making [7]. We hypothesise that functional changes in the brain’s DA-based mesocorticolimbic projections in patients diagnosed with WAD are manifested as altered regional glucose metabolism in the target areas of the mesocorticolimbic projections, as an expression of altered neural activity and DA radiotracer binding potential at the sites of interaction between neurotransmitter and receptors. 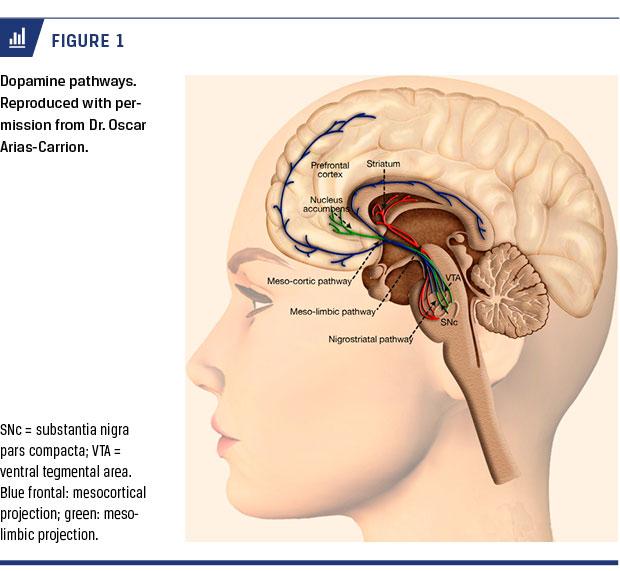 The Department of Occupational and Environmental Medicine in Odense will recruit patients with WAD meeting the criteria of the International Classification of Diseases, tenth version (ICD10) F43.2x through exposure to predominantly psychosocial work stressors.

Patients are women aged 34-54 years with a bachelor level education who represent the largest affected group in the Danish workforce [10]. They undergo a clinical diagnostic interview based on the ICD10 criteria, including screening for stressors in the psychosocial work environment and the relationships of the stressors to disease development, private-life strains, personal background, mental vulnerability and competing somatic disease, as well as tests for depression and anxiety symptoms, respectively, as measured by the Beck Anxiety Inventory and the Major Depression Inventory. The screening for psychosocial work environment stressors includes: quantitative demands, emotional demands, role conflict, role ambiguity, support and encouragement, organisational justice, adequate education and training (skill level). The experience of stressors is assessed in relation to the most dominant stress models, “demand-control-support” (Karasek), “effort and reward imbalance at work” (Siegrist), “Stress as Offense to self” (Semmer) and classic stress theory focusing on appraisal and coping (Lazarus or Ursin). In connection with the scans, a Schedules for Clinical Assessment in Neuropsychiatry-Present State Examination interview for the assessment of mental symptoms will be conducted to determine if the participant’s condition has changed since the first diagnosis. Healthy controls are recruited and matched with regard to gender, age, and educational and occupational background. See Table 1, Table 2 and Table 3 for inclusion-, exclusion- and withdrawal criteria. 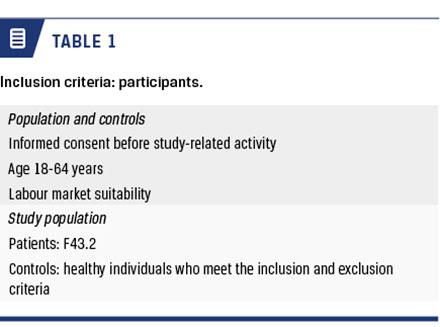 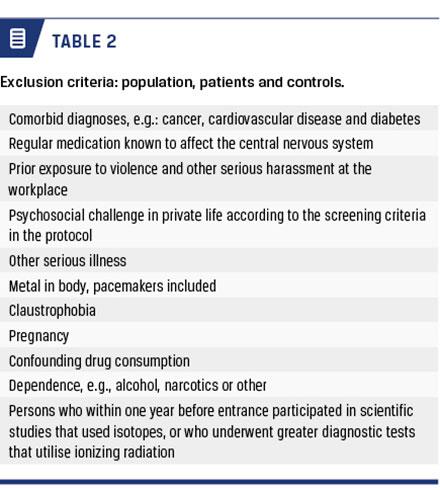 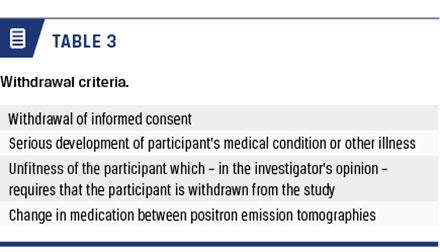 18F-fluorodeoxyglucose (FDG) PET is the primary imaging tracer, which measures glucose metabolism in the brain as an indicator of neural activity [11]. We will examine whether symptoms of cognitive and motivational or reward deficits are attributable to frontal-lobe and striatal changes in glucose metabolism in F43.2x patients compared to a control group. Initially, we will investigate global glucose consumption in patients versus control subjects. In addition, we will investigate regional differences in glucose metabolism in the striatum connected to the reward circuitry of the mesolimbic DA projection. We will then focus on the prefrontal, dorsolateral prefrontal and anterior cingulate cortex as these regions of interest are known to be strongly involved in the executive circuits of working memory and attention, including the DA’s influence on the performance of working-memory tasks [12-14]. The following two sub-projects will test that alterations can be linked to altered neural activity and to DA radiotracer binding potential at sites where the neurotransmitter and receptor interact.

This study addresses the possible changes of the brain’s reward system’s dependence on DA, performed as a PET imaging of the binding of the radiotracer 11C-raclopride, commonly used to determine the binding potential at D2/3 receptors in the striatum. Raclopride acts as a selective antagonist at D2/3 DA receptors. During scans, the participants will perform neuropsychological reward and executive tasks, to activate the regions of reward and executive functions of the brain, respectively. The tests include the Monetary Reward Task, and for executive functions the Stroop Test. Apart from investigation of baseline conditions, these tests also allow us to study function-related neurobiological activity during performance. In addition, they provide data to evaluate if patients on average actually show deficits of performance compared to control subjects.

Cognitive deficits and reduced abilities to perform executive functions are believed to be related to possibly impaired mesocortical dopaminergic transmission in the extrastriatial regions of the prefrontal cortex [12]. 11C-FLB 457 is a radiotracer with greater affinity for D2 receptors than raclopride, and it is therefore more suitable for imaging of DA receptors in the cortical DA projection [15]. The main regions of interest in this investigation are the dorsolateral prefrontal cortex, the orbitofrontal cortex, the medial prefrontal cortex and the anterior cingulate cortex. The methods used are similar to those of the raclopride study, including task performance.

Considerations relating to the statistical analysis

Descriptive statistics will be performed according to data type (categorical variables: frequencies and respective percentages; continuous variables: mean and standard deviation or median and range, depending on the skewness of data as assessed by means of histograms and approximating normal distributions). Paired differences of quantitative measures (such as glucose consumption and binding potentials at a given time point) between patients and age- and gender-matched control subjects will be analysed with the paired t-tests and Wilcoxon’s rank sign test, pending distributional assumptions of the differences and sample size. Changes from baseline to task-induced activity will be related to baseline, resulting in percentage changes over time; the group difference will then be assessed as the difference between these respective changes over time in patients and control subjects, respectively. The significance level for exploratory testing will be a probability of random effects of less than 5%. Stata 14.2/SE (StataCorp LP, College Station, Texas 77845 USA) will be used for all analyses.

PET measures of whole-brain glucose metabolism with FDG generally average 25 ± 8 (standard deviation) µmol/hg/min. To detect a difference of at least 20% in either direction [16] with a power of 80% and a significance level of 5%, at least 41 subjects must be tested in each of the two groups or the two conditions that are compared, totaling n = 82 in the study. Due to the novelty of the investigation, an interim analysis will be performed with 20 patients and 20 controls, which will trigger early stop due to futility if the difference is 5% or less in either direction. Otherwise, the study will be continued until the total sample size of 82 is reached.

Applying PET technology to research always requires considerations about radiation parameters. In this project, due to new and highly sensitive PET detectors, a PET session with FDG results in an estimated additional radiation dose of about 3 mSv, which is comparable to the natural background radiation per year in Denmark of 4 mSv. The radiation from 11C-raclopride or 11C-FLB 457 is approximately half that dose [17, 18] with rapid decay (T½ = 20 min.), indicating a total radiation dose of 6 mSv when all three sessions are completed in the same subject. According to the guidelines of the Danish National Committee on Health Research Ethics, this qualifies the project for category IIb designation, consistent with an increase of the theoretical risk of dying of cancer later in life from 25.00% to 25.03% [19]. It is noteworthy that at present the American Association of Physicists in Medicine states that there is no convincing epidemiological evidence of increased cancer incidence or mortality from radiation doses lower than 100 mSv.

Despite mounting evidence of detrimental effects of occupational stress on the cognitive and emotional functions of the brain, the underlying mechanisms remain largely unknown. In preliminary inquiries, we found that patients often report that their surroundings question the notion that stress-related disabilities represent a medical condition. Indeed, the ICD10 code F43.2x covers a wide spectrum of symptoms with links to depression, stress and anxiety spectrums, including depressed mood, anxiety, worry, feeling of powerlessness, confusion, and cognitive symptoms of fatigue, memory problems and difficulties concentrating. However, with the prevalence of stress at a daily average cost of 112 million DKK in lost earnings and healthcare expenses, stress is a condition with effects that go far beyond the individual patient.

From a neurobiological perspective, the diagnostic criteria address several functions, and a successful study outcome demands rigorous procedures and requires an interdisciplinary approach to the science. The project focuses on the neuropathology of emotional and cognitive aspects of the F43.2x diagnosis in patients exposed to psychosocial stressors in their work environment, as these aspects appear to be by far the least studied elements of the F43.2x diagnosis. This is so despite a sense that these aspects in particular seem to be the ones most readily examined, considering that major causes of work-related stress are of this kind. Structural studies also clearly suggest that stress can be associated with changes in brain structures and reductions of gray matter volume in the regions of interest [20]. This project may generate entirely new knowledge of brain functions. Thus, the mere finding of objective evidence of stress-induced cerebral illness will be a major achievement in itself.

CONFLICTS OF INTEREST: none. Disclosure forms provided by the authors are available with the full text of this article at Ugeskriftet.dk/dmj

ACKNOWLEDGEMENTS: The authors extend their gratitude to Per Bech & Jens Peter Bonde for background research.