Head injuries are classified into different severity levels [1] of which 70-90% are mild head injuries (MHI) [2]. The risk of serious complications for patients suffering MHI is low, though not negligible [3], making MHI management challenging. Routine use of CT of the head is inadvisable due to its high cost, hampered patient management and a potential risk of radiation-induced malignancy [4]. To reduce the amount of head CT, use of the serum biomarker S100B as a screening tool in MHI patients has been studied [5, 6].

In 2013, the Scandinavian Neurotrauma Committee (SNC) published the revised Scandinavian head injury guidelines in which serum S100B was introduced into clinical use [1] (Supplementary 1 https://ugeskriftet.dk/files/a09210697_-_supplementary.pdf).

According to this guideline, patients classified as having a mild, low-risk head injury and a serum S100B level < 0.10 μg/l sampled within six hours after trauma may be discharged, provided no other circumstances demands admission [1]. It has been proposed that S100B may reduce the cost associated with treatment of patients with head injuries and improve patient flow in the emergency department (ED) [6-9]. A few studies have investigated the financial impact of S100B implementation to the Canadian CT Head Rule guidelines [10, 11]. Information about the financial benefit of S100B in the SNC 2013 Head Injury Guidelines in a Danish population is lacking, and no study has yet examined patient flow after implementation of S100B.

Thus, the aim of this study was to examine the influence of S100B implementation on patient costs and patient flow in a Danish ED.

We conducted a retrospective study in collaboration between the Trauma Centre and the Department of Neurosurgery at Copenhagen University Hospital, Rigshospitalet, Denmark. The hospital has a level-1 trauma centre, with an uptake area for head trauma that varies according to trauma severity. For moderate to minimal head trauma, the Trauma Centre is a referred ED with an uptake area restricted to the Central Copenhagen Area (120,000 inhabitants). The Department of Neurosurgery serves 2.5 million inhabitants at all times. The revised SNC guidelines were implemented in January 2013.

We aimed to include all adult patients (≥ 18 years) admitted to the Trauma Centre between 1 February 2013 and 31 January 2014, with a mild, low-risk head injury within the preceding 24 hours. Patient records with at least one of the following diagnosis codes according to the International Classification of Diseases, 10 edition (ICD-10); DS01 (scalp wound), DS02 (cranial and facial fractures), DS06 (intracranial injury) and DS100 (alcohol intoxication) were screened for inclusion in our study population. Patients diagnosed with alcohol intoxication were screened to ensure inclusion of patients with head injuries but an ICD-10 misdiagnosis. We excluded non-Danish patients (due to follow-up limitations), patients with a serum S100B drawn for other reasons than head injury, patients with insufficient medical records, patients admitted to the ED later than 24 hours after their head injuries, and secondarily referred patients.

Medical records were examined for time of trauma, time of S100B sampling, serum S100B level, severity of head injury, clinical symptoms, radiological examinations, hospitalisation, discharge, surgical intervention, readmission and mortality. Waiting time was examined for the full study population and calculated from arrival at the ED to S100B sampling and from arrival at the ED to head CT. Examinations within ten minutes and after six hours from the time of trauma were considered outliers and were excluded.

All data were anonymised and stored in a project database (Microsoft Excel), as approved by the Danish Data Protection Agency (journal number 2012-58-0004 and I-suite number RH-2017-164).

Volumes of 5 ml venous blood were sampled and collected in a microtainer tube without additives. Samples were allowed to clot for 30 minutes and were then centrifuged for ten minutes at 3,000 G before collecting the serum. The samples were analysed with an electrochemiluminescence assay (Elecsys S100 assay, Roche Diagnostics, Mannheim, Germany) performed on a Cobas 8000 modular analyser. The range of serum S100B detection was reported to be 0.02-39 μg/l. The laboratory results were available one hour after sampling.

All analyses were done with SPSS, version 25.0 (Chicago, IL, USA). The statistical significance level was set to p < 0.05. All tests were two-sided. Data are presented as mean ± standard deviation (SD). Comparisons of means between groups were analysed using the independent samples t-test when data were normally distributed.

Danish healthcare is state owned and tax financed. Hospital expenses are based on the annual hospital budget rather than on refunds per service. The latest Tariff Catalogue from 2017 from Rigshospitalet was used to provide updated patient costs. The costs of a serum S100B sample and a non-contrast head CT were €60 and €178, respectively. The costs for admission and observation for head injuries in the ED were calculated per initiated 24-hour period and were summed to €692. We restricted the costs for admission and observation to one day as our study only regards the initial patient management.

A total of 2,033 patient records were screened for potential study candidates (Figure 1). We excluded 1,400 patients who failed to meet the inclusion criteria. An additional 406 patients were excluded as they had another severity classification than mild, low-risk head injury (n = 387) or were self-discharged against medical advice (n = 19). We enrolled 227 patients meeting the inclusion criteria; 155 (68%) were male (median age 29 years) and 72 (32%) were female (median age 43 years) (Table 1). 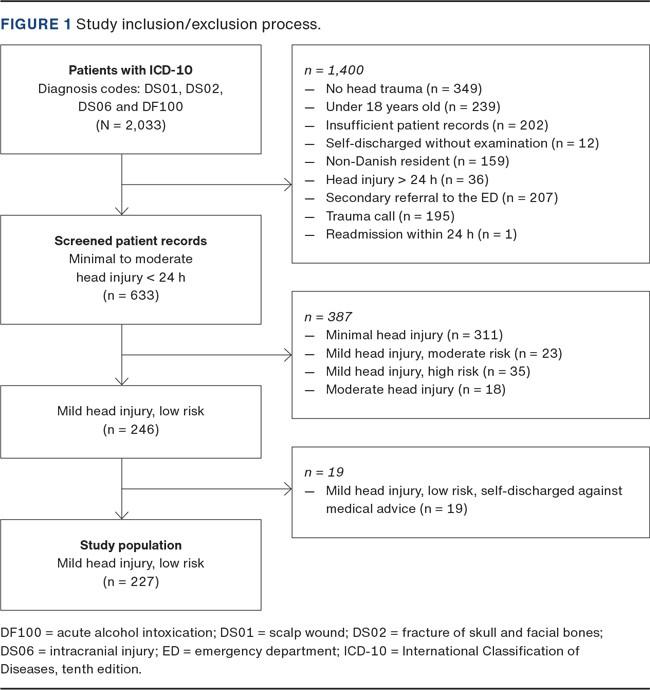 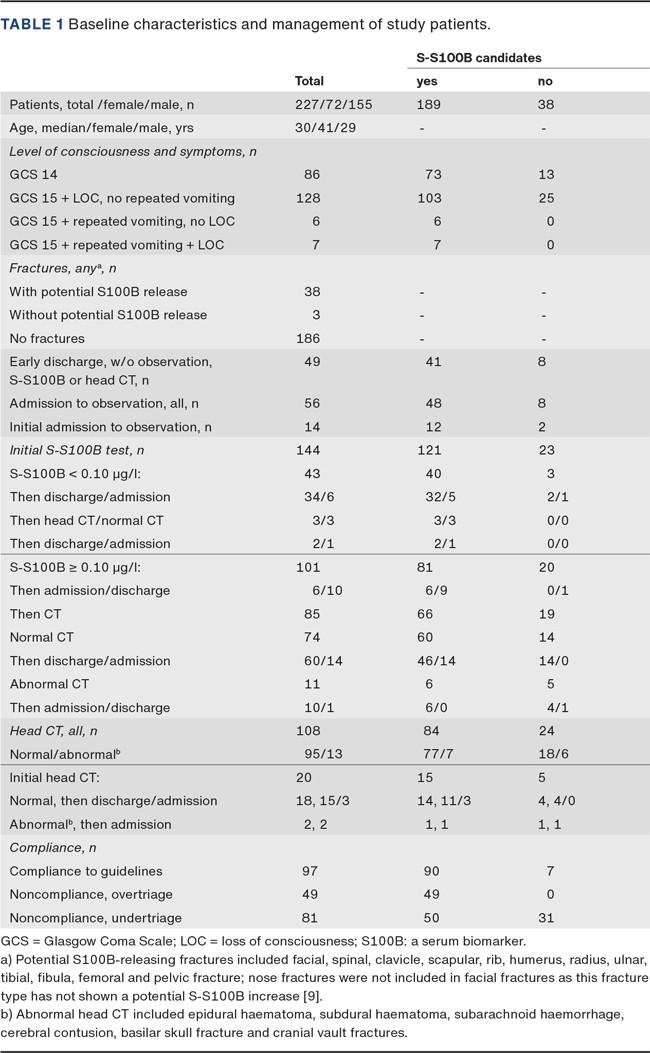 Among the 227 patients with mild, low-risk head injuries, 119 patients (52%) were not treated according to the SNC 2013 guidelines, leaving 108 patients with full guideline adherence.

Due to potential S100B-releasing fractures, 38 patients (17%) were not eligible for S100B analysis. A total of 31 of these patients (82%) were either overtriaged or undertriaged: 23 patients had a serum S100B sample drawn nonetheless and eight patients were discharged without further investigation. Two patients were admitted for observation without serum S100B or head CT and five patients were referred directly for head CT; all seven patients were managed in accordance with the guidelines. A triage overview is presented in Supplementary Tables 2 and 3. 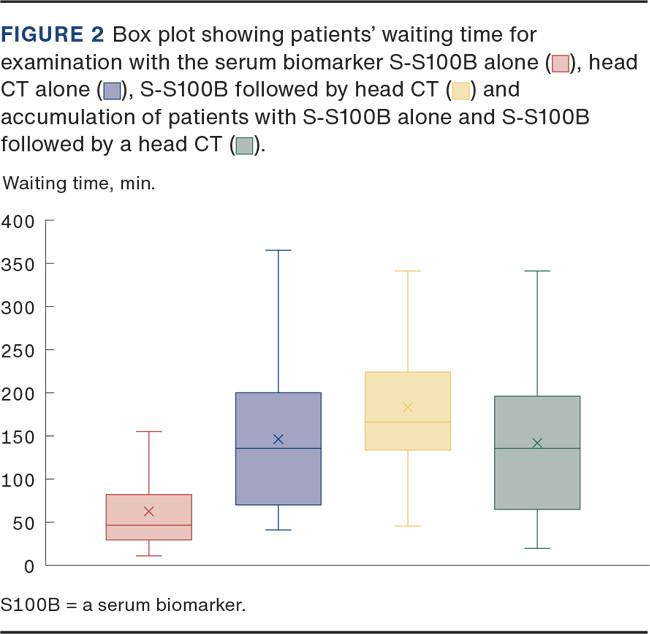 The management of MHI patients is challenging, but biomarkers may help [12]. So far, serum S100B has been the best brain biomarker [9, 13, 14] for ruling out patients without a risk of serious intracranial complications after MHI. We investigated the impact of serum S100B on patient flow and patient costs and found that the use of S100B in the SNC 2013 Head Injury Guidelines neither reduced nor caused substantial additional patient costs or delayed patient flow.

Achieving full guideline adherence after implementation of MHI guidelines has been proven difficult [15]. This is confirmed by our results, as only about half of the MHI patients were treated according to the SNC 2013 Head Injury Guidelines. Taking into account that the SNC 2013 Head Injury Guidelines were published almost concurrently with the inclusion start date of the present study [1], and as compliance with guidelines has been shown to improve over time, an improved guideline adherence would be expected with a later study start date [16]. In general, high educational effort is needed and may be achieved by encouraging education and training when guidelines are implemented [15]. A multidisciplinary approach in which both nursing staff and medical doctors take a proactive role in guideline research has been proven effective when translating guidelines into clinical practice [17].

Effect of S100B on patient costs

In a previous study by Calcagnile et al., which adopted a socioeconomic focus on the SNC 2013 Head Injury Quidelines, the authors found a reduced patient management cost of €39 per patient [8] using S100B. We were unable to present the same optimistic results in our study cohort as implementation of S100B increased patient costs by €1.26 per patient. Head injury patients are numerus in the ED. Thus, this extra cost should be considered insignificant, especially owing to CT reduction and avoidance of radiation, as shown in other studies [4, 19]. Although the present study solely assessed the influence of S100B implementation on patient costs at a theoretical level, we emphasise that comparable studies have reported a similar level of normal S100B samples among patients with MHI, thus supporting the methodology applied in the present study [8, 18].

The cost analysis was based on the 121 patients with S100B drawn on correct indication and not on the 109 patients following the guidelines, as it was performed in a theoretical setting and calculated based on the percentage of abnormal S100B analysis only.

This study was of a retrospective character and the cohort was collected from February 2013 and one year forward. The SNC 2013 Head Injury Guidelines were published in February 2013 and were implemented by the beginning of the inclusion period. Thus, we expect that complete guideline implementation may be lacking, causing pessimistic results regarding guideline adherence and patient flow. An important follow-up study would be a comparison of guideline adherence and patient flow directly after implementation and in the following years.

Another study limitation is that the uptake area for MHI patients at the Trauma Centre at Rigshospitalet is relatively small, limiting the patient load and inclusion size. Finally, serum S100B may be analysed by few commercially available methods, though the most commonly used method in the Scandinavian countries is the one provided by Roche, as other biomarkers can be analysed on the same machine. This study did not consider the one-time cost of purchase of laboratory equipment. Furthermore, educating personnel in the use of a novel method requires time. These costs should be considered when implementing serum S100B.

An interesting aspect of the use of S100B isthe possible reduction of head CT in patients with MHI. Discussing this aspect is not within the scope of the present study and cannot be answered by the methodology applied.

Correspondence Ramona Åstrand. E-mail: ramona.alice.aastrand.01@regionh.dkAccepted 26 April 2022Conflicts of interest none. Disclosure forms provided by the authors are available with the article at ugeskriftet.dk/dmjCite this as Dan Med J 2022;69(7):A09210697