Predictors of bronchopulmonary dysplasia and pulmonary hypertension in newborn children

Preterm deliveries are those that occur before 37 weeks’ of gestational age (GA). In the US, the preterm delivery rate is 12.18% [1]. Today, smaller and more premature infants survive more often than previously owing to technological advances, improved ventilatory strategies and better nursing techniques coupled with the use of prenatal steroids and postnatal surfactant [2]. In these infants, bronchopulmonary dysplasia (BPD) has been characterized on the basis of pathology found in infants dying from the condition [3]. BPD is characterized by less fibrosis, less inflammation, fewer and larger alveoli, and a reduction in the number and size of intra-acinar-pulmonary arteries [3]. These changes cause a significant reduction in the cross-sectional area of the pulmonary vascular bed, which gives rise to increased pulmonary vascular resistance, which, in turn, leads to development of pulmonary hypertension (PH). PH is a severe complication of BPD and it contributes significantly to the increased morbidity. Furthermore, premature infants with BPD and severe PH are at high risk of death, particularly during the first six months after diagnosis of PH [4].

A retrospective study was conducted by reviewing medical records and data from a neonatal database (NeoBasen) which contains data on all infants admitted to the neonatal department at Hvidovre Hospital, Copenhagen University Hospital, Denmark. All infants with a birth weight (BW) < 1,500 g who were hospitalized between January 2002 and December 2010 were included. Clinical evidence has been provided that significant risk factors associated with BPD in neonates is a BW ≤ 1,500 g. The exclusion criteria were diaphragmatic hernia, congenital pulmonary malformation, congenital cytomegalovirus pneumonia, chromosomal syndromes, malformations or other known explanation for prolonged need of oxygen. Furthermore, infants who died before reaching a post-conceptional age of 36 weeks were excluded.

According to the definition refined in the consensus conference of the National Institute of Child Health and Human Development (NICHD) in June 2000, infants depending on supplemental oxygen for a minimum of 28 days suffer from BPD [5]. Prematurely born infants are classified as having moderate or severe BPD according to their respiratory support requirement a GA of 36 weeks [5]. Our retrospective design bars us from using this method since the percentage of supplemental oxygen is not rigorously described in the medical records. Regardless of these limitations, in order to classify severity, we used the need for supplemental oxygen at a GA of 36 weeks as a measure of moderate/severe disease and the need for supplemental oxygen for 28 days as a measure of mild BPD. For more definitions, see Table 1.

The diagnosis of PH was made by echocardiography based on the following criteria: dilatation of right-sided chambers or right-sided ventricular hypertrophy or flattening and left deviation of the septum or triscuspid incompetence (TI) gradient > 30 mmHg or steep pulmonary artery flow curve with an acceleration time (AT)/ejection time (ET) ratio < 0.3. The same criteria for PH were applied to all cases. Routine echocardiography was not provided. Echocardiography was only provided on clinical demand such as a heart murmur or increasing need for oxygen.

Results of analyses for bronchopulmonary dysplasia in the whole cohort

The premature infants with BPD (BPD infants) had a significantly lower GA and BW than those without BPD (non-BPD infants) (Table 2). The mean GA at birth was 26.7 weeks, and the mean BW was 904 g for BPD infants. There were significant differences between BPD infants and non-BPD infants with respect to vaginal birth, surfactant, tracheal intubation at birth, mechanical ventilation < 24 hours after birth, duration of CPAP treatment, duration of intubation, Apgar score after one minute and five minutes, treatment for retinopathy of prematurity (ROP), surgical management and treatment with indomethacin for PDA, postnatal infection and weight at discharge (Table 2). Based on the multivariate logistic regression analysis, GA was the only factor significantly associated with the development of BPD.

The proportion of BPD infants among the live born infants increased along with the general increase in the survival rate of the neonates born at < 1,500 g of BW between 2002 and 2010.

Results of analyses for pulmonary hypertension in the bronchopulmonary dysplasia cohort

Based on the multivariate logistic regression analysis, postnatal infection was significantly (p = 0.0100) and positively correlated with PH in preterm infants with BPD.

The prevalence of PH among the entire sample of preterm infants with BPD was 23%.

In the present regional cohort study of premature infants born in Denmark during the 2002–2010 period, BPD was a serious complication to prematurity and was diagnosed in 18.5% of the surviving infants. The characteristics associated with BPD are well-known [9] and were also confirmed in our study. Prematurity is a primary determinant of an infant’s risk of developing BPD due to poor development of the airways in the premature lung.

The incidence of BPD in the literature ranges from 4.6% to 72% [10-12]. This broad range may be explained by the heterogeneity of the studied populations, or by varying management practices or disease definitions. The BPD incidence observed in our cohort was expected from the literature and was very close to that reported by Cunha et al [13] who found the global incidence of BPD among very low birth weight (VLBW) newborns to be 19.7% .Our result was lower than that reported in the study published by the Neocosur Group [14] who found the incidence to be 23%, and those of two other large data banks in Canada and the United States which have published a BPD incidences of 26% [15] and 23% [16], respectively, in VLBW newborns. The difference between the incidence rates of the cited studies and our study may be due to the higher rate of healthy infants in our cohort. Infants who are very sick get transferred to a more specialized hospital in Denmark.

l and postnatal factors for disrupted alveolar growth remain fairly well defined. Prematurity (GA < 37 weeks) remains the primary determinant of an infant’s risk of developing BPD [9]. Our results are in accordance with international results. A low GA was found to be the most important factor associated with the development of BPD in our study.

In the present study, we aimed to evaluate possible characteristics associated with PH in BPD infants. The prevalence of PH among the entire sample of preterm infants with BPD was 23% in our cohort. Retrospective studies report that PH may occur in up to 17-43% of preterm infants with BPD [4, 17-19]. In the present study, most of the infants diagnosed as having PH had underlying moderate/severe BPD. Furthermore, the duration of oxygen supplementation was significantly longer in the PH group than in the non-PH group. These findings are consistent with previous findings by An et al [17] and Kim et al [18].

In a large retrospective study, An et al [17] obtained data by reviewing the medical records of all infants < 32 weeks GA born between 2004 and 2008. A total of 116 preterm infants with BPD ware included. The study showed that PH occurred initially at a median age of 65 days (range: 7-232 days). Severe BPD, BW < 800 g, long-term ventilator care and oxygen supplementation, a high ventilator setting, infection and a PDA were related to PH based on univariate analysis (p < 0.05). The severity of BPD was graded according to the fraction of inspired oxygen (FiO2) or positive pressure ventilation (PPV) as follows: mild BPD, breathing room air; moderate BPD, requiring oxygen supplementation (FiO2 of < 0.30); and severe BPD, requiring an FiO2 of ≥ 0.30 or PPV at 36 weeks GA. The infants who received oxygen supplementation for a longer period were significantly more likely to have PH (odds ratio, 18.5; 95% confidence interval (CI), 4.1-84.6; p < 0.001). Kim et al [18] performed a retrospective review of data from 295 infants with a GA < 32 weeks born during the 2005-2009 period. Of the 295 infants enrolled in the present study, 145 (49%) were diagnosed with BPD. A total of 25 preterm infants (17 males and eight females) with BPD had PH. PH was diagnosed in 52.5% (21/40) of infants with severe BPD, in 6.9% (4/58) of infants with moderate BPD and in 0% (0/47) of infants with mild BPD. BPD and its severity were defined using treatment with oxygen for at least 28 days with division into the following three subgroups at 36 weeks’ PCA: 1) mild (breathing room air); 2) moderate (need for a < 30% FiO2), and 3) severe (need for > 30% FiO2 and/or positive pressure support). They found that infants with PH had more severe cases of BPD and underwent longer oxygen therapy, conventional or high-frequency ventilation, and hospitalization than those without PH. Low 5-min Apgar scores (≤ 6; relative risk (RR) 6.2; 95% CI 1.4-28.0; p = 0.017) were found to be significant risk factors for PH according to multivariate analysis. There was a tendency towards a lower 5-min Apgar in the PH group, but this finding was not significant in our cohort.

This study was limited by its retrospective design, which resulted in incomplete data collection. Not every BPD-infant underwent echocardiography during the study period. As the use of echocardiography was selective, we were only able to determine a minimal estimate of PH in BPD infants. This may have led to undiagnosed PH in our BPD group without PH. Cardiac catheterization is today accepted as the gold standard for diagnosing PH. However, since this procedure is very invasive and is not easily performed in preterm infants, echocardiography is recommended as the main tool to screen for PH despite its several limitations [20]. Even though it is likely that echocardiography tends to be ordered for the sickest infants, routine use of echocardiography may lead to earlier diagnosis, altered treatment strategy and more knowledge of the development of pulmonary hypertension. Regular screening for PH has also been suggested by other authors [17-19].

Postnatal infection was very broadly defined in our study. We did not have a prospective design, which makes it impossible to determine whether postnatal infections increase the risk of developing PH, or whether infants with PH have more complications during hospitalization in terms of infections than non-PH infants do.

In conclusion, the incidence of BPD at Hvidovre hospital was 18%. A low GA was found to be the most important factor associated with the development of BPD. The findings of this study confirmed our expectation that the variables of BW and GA were risk factors strongly associated with BPD. These data emphasize the fact that BPD continues to be a significant public health concern that is linked to the improved survival of extremely premature newborns. Among BPD infants, postnatal infection was the only factor associated with PH in the final multivariate analysis. To further evaluate risk factors for the development of BPD and PH, a prospective study with routine echocardiography is needed. Improved screening for and increased recognition of PH may allow for earlier treatment and improved clinical outcomes. Identification of both prenatal and postnatal risk factors for the development of PH may allow for targeting of therapy and resources for those at the highest risk.

Acknowledgement: The authors would like to thank Ole Pryds for his help with the statistical analyses. 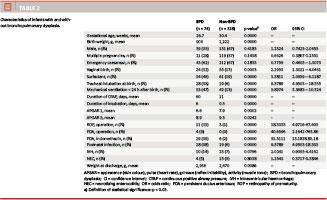 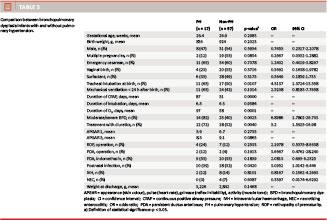 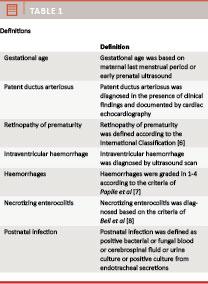