The burden of symptomatic osteoarthritis (OA) is expected to increase rapidly in the future [1], which highlights the need for a paradigm shift towards early-stage treatment [2].

Individualised treatment consisting of exercise, patient education and weight loss is recommended as the core treatment of knee and hip OA [3]. However, the current quality of care is suboptimal and does not reflect treatment guidelines [4]. A comprehensive approach tailored to the specific settings and population is needed to successfully implement guidelines [5].

Good Life with Arthritis in Denmark (GLA:D) represents such an initiative. It teaches physiotherapists to deliver an evidence-based combined treatment of education and neuromuscular exercise [6]. GLA:D is feasible and effective in reducing pain and improving function and quality of life [6]. Furthermore, patient data are entered into a registry which gives a unique possibility to evaluate the quality of non-surgical care given in Denmark [6].

The purpose of this study was to determine if improvements in physical performance and self-efficacy (a person’s belief in his or her ability to succeed in a given situation) from baseline to three months (as measures of treatment effect and compliance) and physical performance and self-efficacy at three months (as measures of patient status after the intervention) were predictors of long-term effectiveness in patients with knee and/or hip pain.

This was a prospective uncontrolled pilot study undertaken in clinical practice with 12-month follow-up.

The study included a total of 82 consecutive patients initiating GLA:D at a physiotherapy clinic between 12 September 2011 and 17 December 2012 with non-acute knee (63 patients), hip (13 patients) or knee and hip (6 patients) pain (Table 1). The exclusion criteria were symptoms more pronounced than the knee/hip pain, co-morbidities influencing physical activity, and not understanding Danish. The short-term results for 36 of the 82 patients have been reported [6]. The study was approved by the Danish Data Protection Agency and conducted in accordance with the Helsinki Declaration.

GLA:D is a combined education and exercise treatment programme for patients with knee and/or hip pain. The educational part consists of three 1.5-hour sessions, two led by a physiotherapist and one led by a previous GLA:D participant.

The education aims at improving the knowledge of the participants regarding OA and its treatment. The educational part is followed by 12 sessions of individualised exercise supervised by a physiotherapist or at home according to the NeuroMuscular Exercise Program (NEMEX) [8]. For further details on GLA:D, see [6].

In this study, all assessments and interventions were performed by one of two physiotherapists trained in delivering and evaluating GLA:D.

Average pain during the past month (primary outcome; visual analogue scale (VAS) 0-100) and Euro-Quality-of-Life – 5 dimensional form (EQ-5D) were assessed at baseline and at the three- and 12-month follow-ups.

Changes from baseline to three months in self-efficacy and physical performance were regarded as measures of effect from patient education and exercise, respectively.

Absolute results after three months in self-efficacy and physical performance were regarded as measures of psychological and functional status after the intervention, respectively.

Data were confirmed to be normally distributed by visual inspection of Q-Q plots.

A repeated measures (RM) ANOVA was used to evaluate short-term and long-term effectiveness with time (baseline, three months, 12 months) as the within-subject factor. Bonferroni was used as post hoc test (by multiplying the p values by the number of tests).

Regression analyses were applied to investigate whether the a priori hypothesised predictor variables were associated with long-term effectiveness. The construction of the model followed the construction proposed by Bursac et al [11]. Any variable with a p-value < 0.10 in the univariable analysis was included in the multivariable analysis [11]. Any variable included in the first model was removed if non-significant (p ≥ 0.10) and not a confounder (i.e. changed the estimate of the other variables > 20%). Variables not selected for the first model were re-entered into the model to identify variables that contributed to the model in the presence of the other variables (p < 0.10). The assumptions of normality and constant variance were verified using a normal probability plot of residuals and a plot of standardised residuals against standardised predicted value. Tolerance level was used to test for collinearity (< 0.01 resulted in exclusion of variable). Beta-values were used as a measure of how much each independent variable affected the dependent variable.

The significance level of the RM ANOVA and the final regression model was set at p < 0.05, and all analyses were performed in IBM SPSS Statistics (Version 20, IBM Corporation, Armonk, NY, USA).

A total of 79 (96%) patients completed the 12-month follow-up. One of the three participants not completing the follow-up was terminally ill, whereas the other two were unavailable for follow-up. Compared with baseline, pain (p < 0.001) and EQ-5D (p < 0.006) were significantly improved at the three-month and 12-month follow-ups, with similar pain and EQ-5D scores at both follow-up time points (p > 0.85; Table 2).

Predictors of quality of life

Univariable regression analysis showed that self-efficacy at the three-month follow-up (Beta = 0.304) was a significant predictor of 12-month improvement in quality of life (p = 0.01) (Table 4).

A systematic review from 2007 failed to demonstrate long-term effects following short-term exercise therapy for hip and knee OA [7]. However, a more recent high-quality, cluster-randomised controlled trial (RCT) investigating the effectiveness from exercise and patient education in 418 patients with chronic knee pain found short-term effects to be maintained at 2.5 years [12]. The authors suggested that the maintained effects could be due to the contents and design of their intervention considering physiological, psychological, behavioural and socioeconomic aspects [12]. Integrating these aspects into the education combined with an individualised exercise programme may be instrumental in improving long-term adherence and effectiveness by changing the patients’ beliefs in the importance of exercise as a method to control and improve pain in OA [13]. The educational part of GLA:D focuses on these aspects and encourages and supports the participants to continue exercising after the supervised 12-session treatment programme. This empowerment of the participants may improve their ability to deal with symptoms, also following the treatment programme using exercise and other self-help tools.

Greater improvement or better self-efficacy and physical performance at three months were found to be predictors of a better long-term outcome. This indicates that the physiotherapist should give extra attention and support to patients with small improvement or low self-efficacy and/or physical performance after the intervention since they may not achieve good long-term results. This can be implemented directly in clinical practice, giving the physiotherapist a further possibility to guide treatment after the treatment period.

Consisting of change in self-efficacy and self-efficacy after the treatment programme, our model predicted 26% of the variance in change in pain from baseline to 12 months, which is comparable to findings from attempts to explain variation in outcomes following total knee replacement [15].

However, a large proportion of the variation in the outcome remains unexplained. Several other factors, such as depression, knee alignment, signs of inflammation and pain intensity, have been shown to predict non-surgical treatment outcome in knee and hip OA [16, 17]. Including these and other predictors in future analyses from the GLA:D registry when greater sample sizes are available could improve the predictive capacity of the model.

By the end of April 2014, GLA:D was offered by more than 200 physiotherapists across all five health-care regions in Denmark in both primary and secondary care, and data from more than 1,500 patients have been entered into the registry. Owing to a huge interest among health-care providers, patients and the media, the numbers of physiotherapists offering the intervention and patients undergoing the intervention are rising rapidly. In Sweden, data are available from more than 14,000 patients with hip or knee OA who have received education similar to the GLA:D education. Using a simple equation (cost/EQ-5D improvement), the cost per quality-adjusted life year for the Swedish OA school is 50,000 SEK for hip patients and 37,500 SEK for knee patients [18]. Using the same equation, total hip arthroplasty costs 194,000 SEK per quality-adjusted life year [18]. Future analyses from the GLAD-registry will show if a combined intervention including education and exercise has the potential to impact the number of health-care visits and the social costs associated with hip and knee OA in Denmark.

Although the observed improvements in pain and quality of life were statistically significant, the clinical significance can be discussed. At a group level, a decrease in pain of 10.5 mm or 30% was found. Whereas a minimum 15 mm decrease in pain is considered clinically important, so is a 15% decrease following exercise [8]. There are a number of definitions of concepts of minimally important change, and the more recent ones include not only patient perception but also the significance of changes in patient’s management, meaning greater changes needed for treatments of greater risk or cost than for treatments with few adverse events and/or of low cost [20]. Education and exercise are low cost treatments with few minor adverse events and thus a smaller improvement can be considered clinically significant than for pharmacological pain relief or surgery, supporting the clinical relevance of the pain reduction of 30% seen in this study from education and exercise.

Furthermore, the clinical relevance of the effects on pain and quality of life from a one-unit change in self- efficacy and physical performance can be discussed. However, the results are significant and they highlight the predictive capacity and importance of the variables.

Another limitation is the lack of control group and the fact that neither gender, exercise adherence after the three months of follow-up, nor affected joint (knee/hip) was controlled for. However, this is an implementation study building upon solid evidence from several RCTs showing that education and exercise are superior to a control treatment [3, 19]. Therefore, the purpose of the study was not to establish evidence for the effectiveness of the treatment or the effects in different subgroups, but rather to investigate the effects when translating evidence into clinical practice. 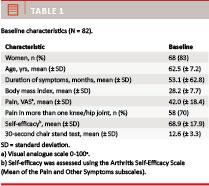