Prevalence of polypharmacy in Denmark

Multimorbidity increases with age and is associated with numerous safety issues relating to patient vulnerability, treatment complexity, miscommunication and polypharmacy [1]. Polypharmacy has no generally accepted definition, but is often operatively defined as use of at least 4-6 concurrent medications [2]. Polypharmacy is associated with multiple adverse health outcomes such as adverse drug events [3], drug-drug interactions [4] and mortality [5]. The prevalence of polypharmacy and the associated problems are expected to grow in the future, and many efforts are in the pipeline to improve the treatment of multimorbid, polypharmacy patients. These efforts are often local initiatives initiated at regional hospitals or in primary care. Consequently, the interventions against inappropriate polypharmacy differ between regions in Denmark. From a national perspective, there is therefore growing interest in supporting interventions that review medications in patients exposed to polypharmacy. Unfortunately, the extent of polypharmacy among the Danish population and the regional distribution of polypharmacy patients in Denmark are not readily available. The most recent study describing medication use among older (> 60 years) adults in Denmark reported that the median number of concomitant medicine classes taken was five [6]. However, the focus of that study was not the prevalence of polypharmacy patients but drug utilisation profiles based on Anatomical Therapeutic Chemical (ATC) Classification System classes [6].

The present study aims to provide a clear and current description of the extent of polypharmacy in Denmark among the entire population in general and the oldest part of the population (age ≥ 75 years) in particular. In order to support future initiatives in older, multimorbid, polypharmacy patients, we have focused on the prevalence and regional distribution of polypharmacy, the number of prescriptions redeemed in relation to age and the most commonly prescribed individual medicines for older Danish citizens.

Cross-sectional summary data from the first half of 2016 were obtained from The Danish Health Data Authority for citizens of all ages and for older citizens, which we defined as citizens at least 75 years of age. Data were obtained for the five Regions of Denmark separately and for the entire country. The data included information about number of citizens per number of redeemed prescriptions for different medicines (different on fifth level ATC code: chemical substance) and number of citizens with polypharmacy. Since antibiotics are primarily used for short-term treatments, data were obtained with and without antibiotics (ATC group J). Prescriptions for topical medicines were included. Summary statistics were calculated by the Danish Health Data Authority.

The ten most commonly redeemed prescriptions in 2016 for citizens aged ≥ 75 years were calculated based on national data from Medstat [7]. We excluded antibiotics from this list since antibiotics are often short-term treatments. We then categorised the medicine according to targeted organ system and according to whether the medicine is primarily used for preventive or symptomatic treatment. For each medicine on the top ten list, we also defined a clinically relevant medicine class. The medicine classes were based on the ATC system and were defined by a single ATC code each, but the level of the ATC code could differ depending on clinical relevance and the similarity of the therapeutic agents. The ten medicine classes we defined were: “All analgesics excluding NSAIDs” (ATC code N02), “All statins” (C10AA), “All platelet inhibitors” (B01AC), “All proton pump inhibitors” (A02BC), “All dihydropyridine calcium blockers” (C08CA), “All selective beta blocking agents” (C07AB), “All opioids” (N02A), “All loop diuretics” (C03C), “All thiazides” (C03A), and “All angiotensin II receptor blockers” (C09CA). Potassium was excluded post-hoc as potassium is a mineral supplement typically taken as an adjunct to furosemide. For each medicine class, we calculated the proportion of the population that redeemed at least one prescription for any medicine belonging to this class.

All Danish citizens are included in both data sources, so there is no statistical uncertainty due to sampling. Therefore, all statistics presented are descriptive summary statistics.

The proportion of the population that redeemed prescriptions for > 5 different medicines in the five Regions of Denmark is shown in Table 1. The North Denmark Region had the highest prevalence of polypharmacy, whereas the Capital Region of Denmark had the lowest prevalence in all comparisons. The largest absolute difference in polypharmacy prevalence between regions was 4.7% (for citizens aged ≥ 75 years, excluding antibiotics). Since the regional differences were small, the other results are presented for the entire Danish population. 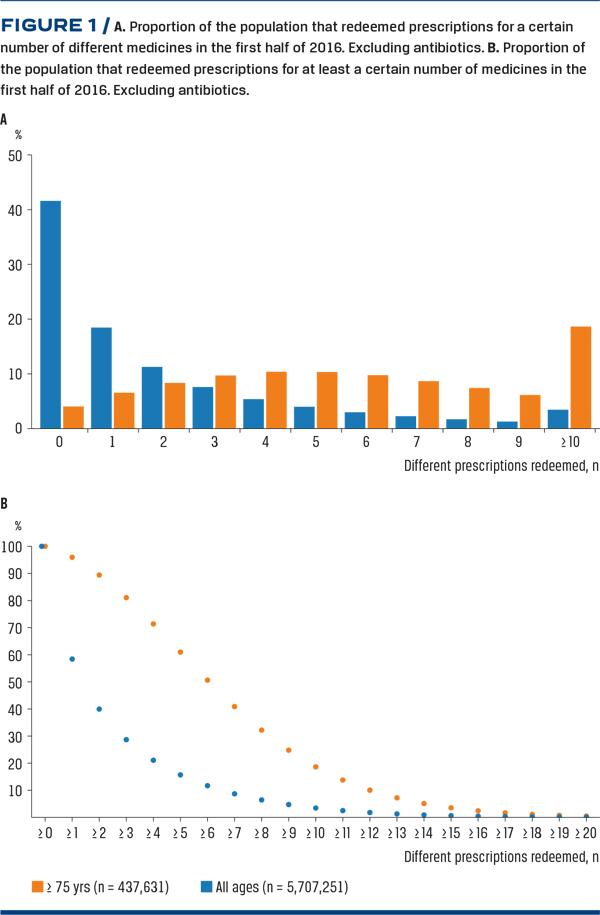 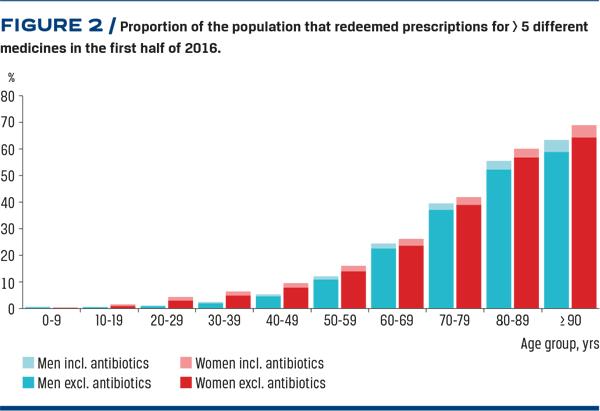 The medicines most frequently redeemed by citizens aged ≥ 75 years are shown in Figure 3. The proportion of sales with prescriptions were > 96% for all substances on the list, except for acetylsalicylic acid (91%) and paracetamol (81%). Sales without prescriptions cannot be identified on an individual level and are therefore not included in this figure. Half of the medicines on the list are preventive medicines acting on the cardiovascular system: Simvastatin, acetylsalicylic acid, amlodipine, bendroflumethiazide and losartan. The other medicines acting on the cardiovascular system are symptomatic (furosemide) or both symptomatic and preventive (metoprolol). Two medicines are symptomatic and used for treatment of pain: paracetamol and tramadol. Lastly, one medicine is symptomatic or preventive for gastrointestinal reflux disease or ulcer: pantoprazole. 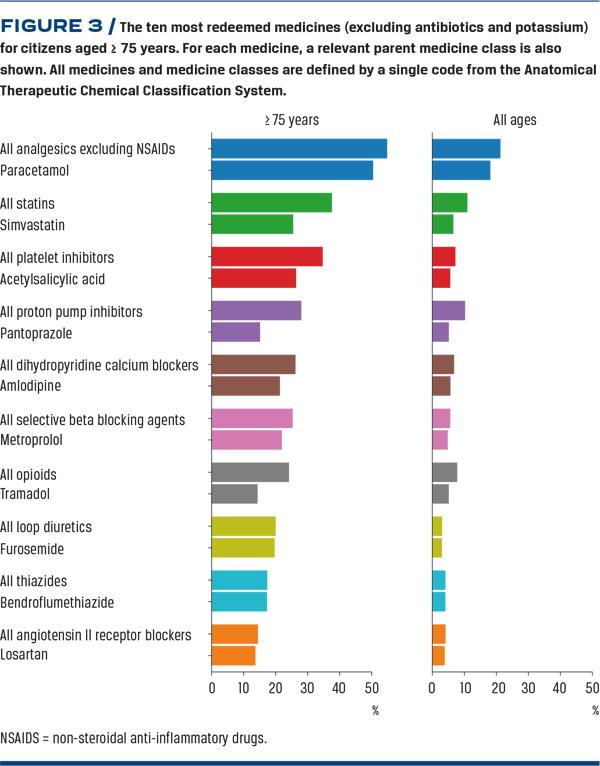 Polypharmacy defined as > 5 medicines is prevalent in the Danish population with more than 684,000 Danish citizens exposed to polypharmacy in the first half of 2016, and with only minor regional differences in prevalence (Table 1). The prevalence of polypharmacy increased with age (see Figure 2), and more than half of the population aged ≥ 75 years (approximately 223,000 people) redeemed prescriptions for > 5 different medicines in the first half of 2016. The fact that the prevalence of polypharmacy was highest among the oldest citizens is not surprising. As age increases, so does morbidity (and number of diagnoses) [1]; and, perhaps as a logical consequence, so does the number of prescription medicines.

Interestingly, for all age groups, polypharmacy was more prevalent among women than among men (see Figure 2). Studies from Sweden [8] and Australia [9] have reported similar findings. The reason for such gender difference remains unknown but may be related to differences in morbidity [10], more doctor visits for women [11] or an altered symptomatology as evidenced by the more frequent medication-related adverse events observed in women than in men [12].

The prevalence of polypharmacy patients in this study is quite high compared with the prevalence reported from other countries. In a Swedish cohort of citizens aged ≥ 75 years, only 45% redeemed prescriptions for ≥ 5 medicines [13], and in Australia the corresponding number was 36% (for citizens aged ≥ 70 years) [9]. If we change our definition to ≥ 5 medicines, the number of polypharmacy patients aged ≥ 75 years in Denmark can be read from Figure 1B as approximately 60%. The reason for the higher prevalence of polypharmacy in Denmark than in Australia and Sweden cannot be explained from these data sets but may be explained in part by a difference in methodology. Wastesson et al [13] calculated concomitant medicine use on a single day based on the amount of medicines redeemed during the previous three months and the prescribed dosage (or defined daily doses when prescribed dosage was missing). Page et al [9] used continuous medicine use instead, defined as medicines that were redeemed in both of two three-month periods during a calendar year. Both methods are more conservative than counting the different medicines redeemed during a six-month period. Our prevalence rate is close to the prevalence that can be extracted from another Danish study [6], according to which 53% of citizens > 60 years redeemed prescriptions for ≥ 5 medicines in 2015 (manual calculation from Table 1 in Christensen et al [6]).

As mentioned, certain risks are associated with an increase in concomitant medicines in older individuals and > 5 medicines can be used to identify individuals with frailty and a heightened risk of various adverse outcomes including those related to adverse events and interactions [3, 4, 14]. However, as most therapies also provide benefits to patients, it is important to distinguish between appropriate and inappropriate polypharmacy [2]. It is well documented that an increasing number of medicines associate strongly with a higher risk of taking an inappropriate medication [15]. Thus, it is likely that the 19% of citizens aged ≥ 75 years with excessive polypharmacy (≥ 10 medicines) has a substantial risk of receiving an inappropriate medication [16]. The appropriateness of a given medication can (only) be determined through a medication review based on clinical knowledge of the medical history, the medication history (including the complete medication list) and the participation of the patient [17]. In relation to this, the top ten list of the most frequently redeemed medicines by older Danish citizens (Figure 3) includes some medicines that may be inappropriate in older, multimorbid polypharmacy patients. The high prevalence of opioid use entails a risk of sedation and falls. Likewise, the frequently prescribed furosemide and proton pump inhibitors are medicines that often have questionable indications and may contribute to inappropriate polypharmacy [18, 19]. Lastly, half of the most frequently redeemed medicines may be considered primarily preventive treatments, where the risk-benefit balance could be unfavourable in older, multimorbid polypharmacy patients, and where alignment of treatment goals and patients’ goals of care is needed. These issues highlight the need for critical medication reviews; however, as medication reviews are expensive and time-consuming, there is an imminent need for clever ways to target the patients at highest risk of inappropriate polypharmacy.

Certain limitations to these epidemiological data should be considered. Polypharmacy entails concomitant administration of multiple medicines; and when we simply tally the number of different redeemed prescriptions, we do not know whether there was a change in treatment or simultaneous treatment with two medicines. Therefore, we might overestimate the number of polypharmacy patients. Some medicines, e.g. analgesics, are often used for a short treatment or only used as needed. More sophisticated methods exist to establish simultaneous drug exposure, but the number of prescriptions redeemed is normally considered an acceptable estimator [20]. However, a common problem for pharmacoepidemiology is that we do not know whether the citizens take their medication, only that they redeemed a prescription. Furthermore, because the data are cross-sectional, changes across age groups do not reflect changes during individuals’ lives. Importantly, there is some degree of underestimation in these data as use of herbal medicine and over-the-counter (without prescription) medicines are not included. Actually, a large proportion (19%) of the most used medicine, paracetamol, was sold without prescriptions and therefore cannot be identified on an individual level.

Polypharmacy is prevalent in Denmark, especially among older citizens, and the prevalence increases with age. More than half of the population aged ≥ 75 years redeemed prescriptions for > 5 different medicines in the first half of 2016. There were no relevant regional differences in the prevalence of polypharmacy. The medicines redeemed by most older citizens in 2016 were, by far, cardiovascular medicines followed by analgesics and gastrointestinal medicines.

Correspondence: Jonatan Kornholt.E-mail:jonatan.kornholt@regionh.dkAccepted: 20 April 2020Correction: June 10 2020: In the article “Prevalence of polypharmacy in Denmark, Dan Med J 2020;67(6):A12190680” a correction has been made in the first column in Table 1.Conflicts of interest: none. Disclosure forms provided by the authors are available with the full text of this article at Ugeskriftet.dk/dmj