Prevalence of sarcopenia in a Danish geriatric out-patient population

Sarcopenia is a multifactorial geriatric syndrome that is characterised by a progressive loss of skeletal muscle mass and associated with a high risk of physical disability, poor quality of life and increased mortality [1, 2]. Rosenberg introduced the concept of sarcopenia in 1988, and he stated that loss of lean body mass was the most significant age-related physical decline [3]. The first to propose a method for identifying sarcopenia, based on muscle mass, was Baumgartner and colleagues in the 1990s, using dual energy X-ray absorptiometry (DXA) [4]. Based on the criteria suggested by Baumgartner, the prevalence of sarcopenia was found to be 13-24% among older people > 70 years, and up to 50% in older people > 80 years, depending on the population studied [4-6]. These studies are from Northern America and Italy.

However, accumulating data have demonstrated that muscle mass may not always be linearly related to muscle function [7, 8]. Moreover, functional parameters such as gait speed and hand-grip strength are strong predictors of disability and survival [9]. Consequently, the original definition of sarcopenia as purely a loss of muscle mass has evolved into one that includes a loss of both muscle mass and muscle function [10, 11]. The first steps towards a practical clinical definition and consensus diagnostic criteria for age-related sarcopenia combining muscle mass with muscle function and/or muscle strength were taken in 2009 by the International Working Group on Sarcopenia (IWGS) and in 2010 by the European Working Group on Sarcopenia (EWGSOP) [10, 11]. The latter group suggests that the comprehensive geriatric assessment (CGA) (a multidimensional interdisciplinary diagnostic process focused on determining a frail older person’s medical, psychological and functional capability in order to develop a coordinated and integrated plan for treatment and long-term follow-up) should include assessment of sarcopenia in terms of measurements of muscle mass, hand-grip strength and gait speed [11].

Based on outcomes, sarcopenia is categorised as:

The objective of this cross-sectional study was therefore to assess the prevalence of sarcopenia in a Danish geriatric out-patient population based on the recommendations from the EWGSOP. In addition, the purpose was to describe the association between sarcopenia and age, gender, BMI and prevalence of chronic diseases in the study population. Furthermore, we wanted to evaluate if the sarcopenia assessment based on these recommendations is superior to currently used geriatric tests for muscle function and muscle strength for identification of patients with sarcopenia.

The study population consisted solely of patients recruited from a geriatric out-patient clinic (the Geriatric Section, Medical Department, Rigshospitalet – Glostrup) who were consecutively assessed for inclusion in the study from June 2014 through May 2015. Patients were referred to the geriatric out-patient clinic for fall assessment, geriatric assessment or follow-up after admission from wards at Rigshospitalet – Glostrup, other hospitals, or general practitioners. There was no recruitment from the emergency department. All patients provided their written, informed consent to participate in the extended assessment programme. The local ethical committee approved the study (H-3-2013-124). 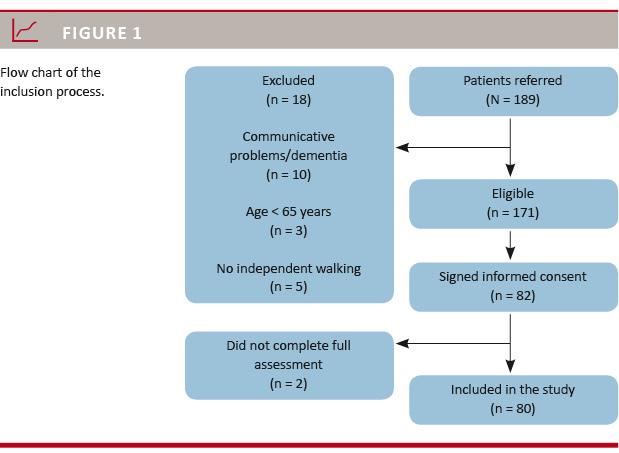 presents a flow chart of the inclusion process. Data on the included patients were collected, including demographics, nutritional status (BMI) and comorbidity.

Muscle strength was determined by hand-grip strength with a hand grip dynamometer (DHD-1 Digital Hand Dynamometer, Saehan 2012) ad modum the Southampton Protocol [13]. In brief, the patient was in a seated position with the arm supported by a horizontal surface. The best of three trials was used for the dominating hand. The cut-off values suggested by Lauretani and colleagues were used (men: < 30 kg, women: < 20 kg) [14].

Muscle function was measured by testing gait speed using the ten-meter walk test with a cut-off value of < 0.8 m/sec. for both men and women [15].

Sarcopenia was classified in accordance with the EWGSOP criteria [11]:

In addition, the patients were tested with chair stand test [16] and Timed Up and Go test [17] as a part of standard CGA in the geriatric outpatient clinic. Cut-off values: Timed Up and Go: > 12 sec. and chair stand in accordance with the patient’s age and gender [16]. The physical tests were performed by trained physiotherapists at the outpatient clinic Geriatric Section, Medical Department, Rigshospitalet – Glostrup.

SAS Enterprise Guide 7.1 was used for the statistical analyses. Unless otherwise stated, continual variables are presented with mean ± standard deviation and categorical variables are presented with numbers and percentage in the presentation of group characteristics. Unpaired t-test, chi-squared test and Fisher’s exact test were used as appropriate in the comparison of the groups. To overcome confounding differences between groups, we performed a multivariate logistic regression analysis with sarcopenia status as the dependent variable and age > 80 years, low BMI (BMI ≤ 20.5 kg/m2) and gender as the covariates. Due to limited sample size, the sarcopenia groups were pooled into two: the no sarcopenia group (no sarcopenia + pre-sarcopenia) and the sarcopenia group (sarcopenia + severe sarcopenia).

A total of 189 patients were screened for inclusion and 18 of these were excluded according to the exclusion criteria. In all, 82 patients signed an informed consent form and were included, and 80 patients completed the full study (Figure 1). 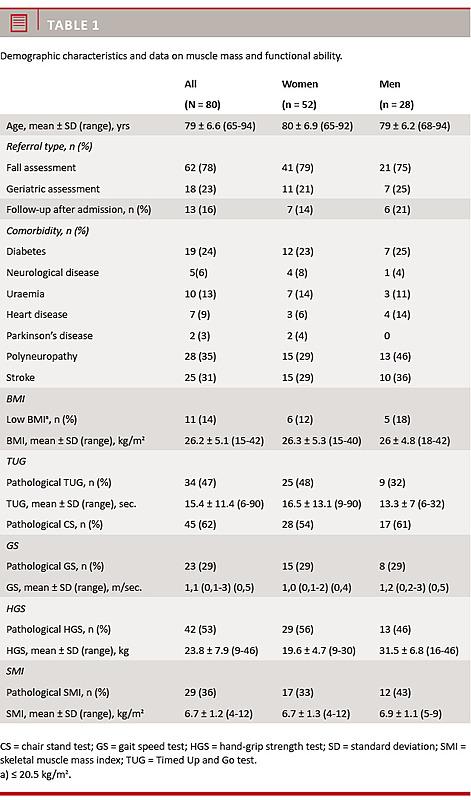 Prevalence of sarcopenia based on the 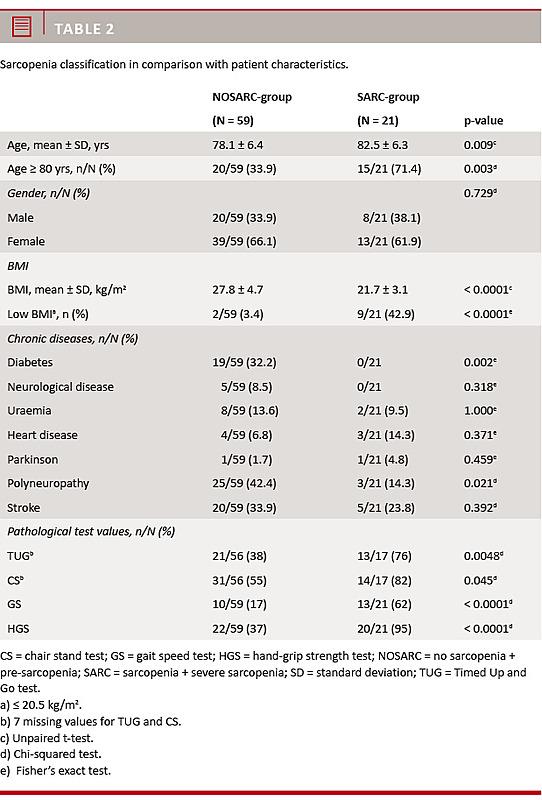 A multivariate logistic regression analysis was performed with clinical sarcopenia (sarcopenia and severe sarcopenia) as the dependent variable and the following covariates in the model: age > 80 years, low BMI and female gender. The results showed that in this study, high age and poor nutritional status were associated with a higher risk of sarcopenia, whereas female gender was not (Table 3)

The negative predictive value was 89% for the chair stand test and 90% for Timed Up and Go, indicating that a patient with a normal test result has a very low probability of having sarcopenia (Table 3). The low positive predictive values for the chair stand test (31%) and the Timed Up and Go test (38%) indicate that these tests cannot be used as predictive assessment tools for sarcopenia (Table 3).

The aim of the present study was to assess the prevalence of clinical sarcopenia in a Danish geriatric out-patient population based on the EWGSOP recommendations. To the best of the authors’ knowledge, this is the first study to do so.

In this study population, the prevalence of clinical sarcopenia (sarcopenia + severe sarcopenia) was 26%, which is in line with data from similar populations [6, 10, 18, 19]. Comparable studies have found sarcopenia to fall in the 4-29% range [10]. A recent study from The Netherlands demonstrated prevalence rates for sarcopenia in a geriatric out-patient population of 17-22% [18].

One of the strengths of this study was that, once included, 98% of the patients completed the assessment programme; yet, the participation rate was only 48%.

A plausible explanation could be that the frailest patients were the ones who declined to participate, thereby making the results less representative for the overall population in the geriatric outpatient clinic. This combined with the small study size may restrict the generalisability of the results.

Furthermore, this study underlines the difficulty of distinguishing if functional limitations are due to sarcopenia or other conditions. A relatively high percentage of the tested patients had functional limitations in terms of low muscle strength and low muscle function without low muscle mass. As most of the patients were referred for fall assessment, functional disability due to, e.g., balance disturbances may interfere with functional disability due to low muscle function. Fear of falling and lack of motivation may be other possible confounding elements. This may have entailed an overestimation of the prevalence of clinical sarcopenia when using the EWGSOP definition in the present population. Another aspect is the American reference material on which the clinical diagnosis of sarcopenia is based when the EWGSOP recommendations are used. As far as we know, a European reference material for muscle mass is still lacking.

In this study, high age and poor nutritional status were found to be associated with sarcopenia, which is consistent with previous findings [4, 6, 11, 18]. Remarkably, though, the present study could not demonstrate an association between sarcopenia and chronic diseases, which may be due to our small sample size and/or selection bias if the frailest patients with chronic diseases and sarcopenia were the ones most likely to decline participation in the study.

Another aim of the present study was to evaluate if the EWGSOP-recommended assessment would be superior to currently used geriatric tests for muscle function and muscle strength in identifying geriatric patients with sarcopenia. Calculating predictive values of the chair stand and Timed Up and Go show that these tests are not suitable for identifying patients with sarcopenia.

A larger number of patients were found with pathological chair stand and Timed Up and Go results than with sarcopenia and/or severe sarcopenia. Common conditions among geriatric patients such as balance disturbances, vestibular dysfunction, orthostatic intolerance and fear may interfere with the test results of the functional tests, since both the chair stand and Timed Up and Go demand a certain degree of standing and walking balance. This may result in some pathological test findings which are not due to sarcopenia. Consequently, the present findings underline that the chair stand and Timed Up and Go may be useful measurements to identify functional limitation and need of physical training in geriatric patients, but it is important to add an assessment of muscle mass (SMI), hand-grip strength and gait speed to the comprehensive clinical geriatric assessment when aiming to identify sarcopenia.

Effective diagnosis of low muscle mass and parallel impairments in muscle function is crucial in order to initiate early targeted treatments to prevent falls, fractures and disability, and ultimately lead to an improved quality of life, and it seems important to gain more experience and knowledge about the various sarcopenia variables and cutoff values in different populations.

Based on the EWGSOP criteria, 26% of the patients in the present study had either sarcopenia or severe sarcopenia. This is in line with previous findings [4, 6, 11, 18]. In contrast, there was no association between sarcopenia and chronic disease, but high age and poor nutritional status were found to be associated with sarcopenia.

Assessment of sarcopenia using the EWGSOP diagnostic method is feasible in a geriatric outpatient population as part of the comprehensive geriatric assessment. The currently used geriatric tests for muscle function and muscle strength – chair stand and Timed Up and Go – cannot identify patients with sarcopenia.