Reduction in maternal mortality in Denmark over three decades

Worldwide, almost 300,000 women die annually during pregnancy and childbirth. Despite the target in the United Nations’ Millennium Developmental Goal 3 to achieve a 75% reduction in maternal mortality from 1990 to 2015, the reduction was only 44% in this period. The maternal mortality rate (MMR) still varies widely with an estimated 415 per 100,000 live births in the least developed countries, ten per 100,000 live births in Europe and even lower in the five Nordic countries [1, 2].

Systematic surveillance of maternal deaths has been a widespread practice in several European countries for decades. Some countries do register-based surveillance for international comparison only, whereas others add hospital record audit. This includes classification of causes of death and assessment of individual cases for substandard care and/or learning points [3, 4].

Since the 1950s, the United Kingdom has conducted confidential enquiries based on notifications and health records. The British model has served as inspiration for the development of similar systems in other countries, including Denmark and the Nordic Maternal Mortality Group [4, 5]. From 2005 to 2017, official data showed a significant decrease in MMR in the Nordic countries [6]. This was confirmed by a recent publication from the Nordic Group [2].

In contrast to the situation in other high-income countries, recent studies describe an alarming increase in MMR in the United States, with MacDorman et al presenting an estimated 26.6% increase in 48 states and Washington D.C. (from 18.8 in 2000 to 23.8 in 2014), whereas Petersen et al reported an MMR of 17.4 for 2011-2015 based on data from the Centers for Disease Control’s national Pregnancy Mortality Surveillance System. A total of 60% of deaths were determined to be preventable [7, 8].

However, making international comparisons is challenging as methods of data collection differ widely, even among the Nordic countries [4]. Furthermore, several studies have shown that maternal deaths are often underreported in official statistics [9-12].

The aim of our study was to present validated maternal mortality data, including causes of death, for two periods between 1985 and 2017 in Denmark.

In accordance with the International Statistical Classiﬁcation of Diseases and Related Health Conditions – tenth revision (ICD-10), we defined maternal death as the death of a woman while pregnant or within 42 days of termination of pregnancy. The maternal mortality rate was defined in line with the World Health Organization (WHO) as the number of deaths per 100,000 live births.

For two periods, 1985-1994 and 2002-2017, deaths during pregnancy and up to one year after pregnancy were identified by register linkage, whereby late deaths were included in the dataset (Figure 1). 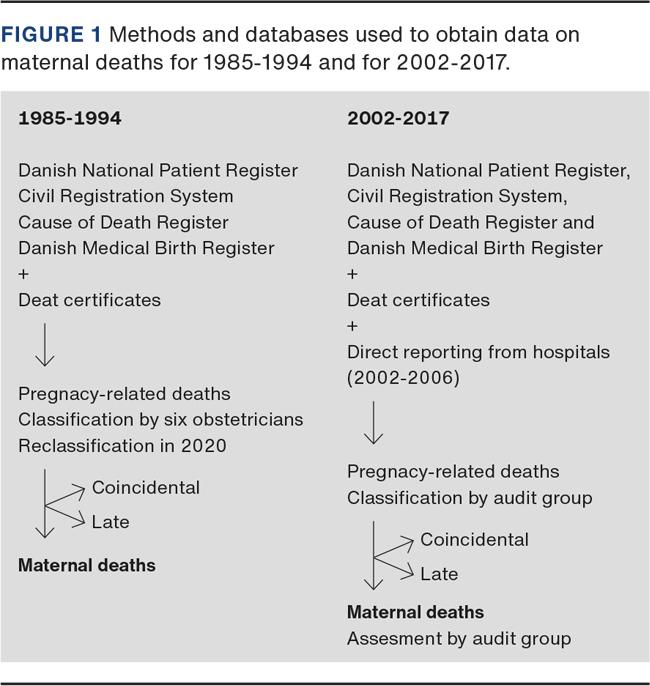 We identified deaths by linking four Danish national registers: the Danish National Patient Register, the Civil Registration System, the Cause of Death Register and the Danish Medical Birth Register. In both periods, register data were combined with data from death certificates. For 2002-2007, this was compared with direct reporting from hospitals. All women who died and had an ICD-10 code in the DO00-DO99 or DZ32-DZ399 range were identified, and primary and secondary ICD-10 codes and causes of death were then extracted from the Danish National Patient Register and the Cause of Death Register. If, based on register data or direct reports, a death was suspected to be maternal and occurred within 42 days after a pregnancy (in accordance with the international definition) we requested full medical records from hospitals and from family doctors, if needed.

For 1985-1994, maternal deaths were identified by register linkage and each case was classified by six obstetricians in accordance with the British Confidential Enquiries into Maternal Deaths (CEMD) classification [13].

For 2002-2017, an audit group was designated by the Danish Society of Obstetrics and Gynaecology consisting of five obstetricians, including three who also participated in the 1985-1994 study. Cases were identified by identical register linkage and classified by the group using a slightly modified CEMD classification, as described below. Available details about organisation, demographics, risk factors, comorbidity and pregnancy complications were registered continuously. Finally, each case was assessed by the audit group and suboptimal care and learning points were identified [14]. When necessary, other specialists, e.g. midwives, cardiologists and oncologists, were consulted. Since the CEMD classification has changed and has been updated over time, we reclassified cases from 1985-1994 accordingly for the present study, which resulted in homogenous classification (Table 1). The obstetric background data were obtained from the Danish Medical Birth Register and include: number of maternities, live births, age at delivery and BMI. 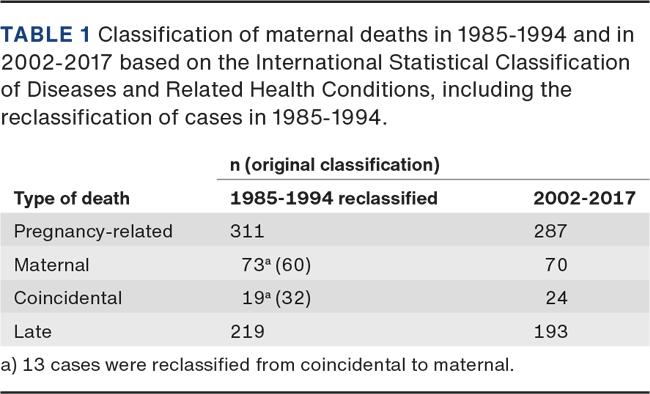 In each time period, the mean age at birth was determined for all women in the cohort as well as for the women who died at birth.

To determine whether there was a trend over time in the MMR, the number of annual deaths was analysed in a Poisson regression model using the number of births per year as an offset variable. Calendar year (quantitative) and period (categorical) were used as explanatory variables. A test of interaction between the two variables was performed to assess whether the trend in MMR in the two periods differed. From the interaction model, the annual change in MMR was estimated and the model was further used to estimate the annual number of deaths per 100,000 births. The significance level was set to 0.05. The analyses were performed using R version 4.0.2.

Table 1 presents the results for both periods.

For 1985-1994, we identified 337 pregnancy-related deaths within one year of pregnancy in the national registries and death certificates. Among these, 26 were excluded due to incorrect ICD-10 codes or missing information on cause of death, leaving 311 pregnancy-related deaths for further sub-classification. For deaths during or within 42 days of pregnancy, 60 were originally considered maternal when assessed in 2009 [13]. To compare data, we reclassified cases from the first period due to classification changes over time. Reclassification produced the identification of nine cases of suicide and four cases of cancer, resulting in 13 adjustments from coincidental to maternal deaths, making a new total of 73 maternal deaths (Table 2). In the same period, 618,021 live births were registered, resulting in an overall MMR of 11.8 (95% confidence interval (CI): 9.3-14.9) per 100,000 live births in 1985-1994. There was a non-significant increase in MMR over the period. The annual rate ratio was 1.02 (95% CI: 0.94-1.11), p = 0.58 (Figure 2). 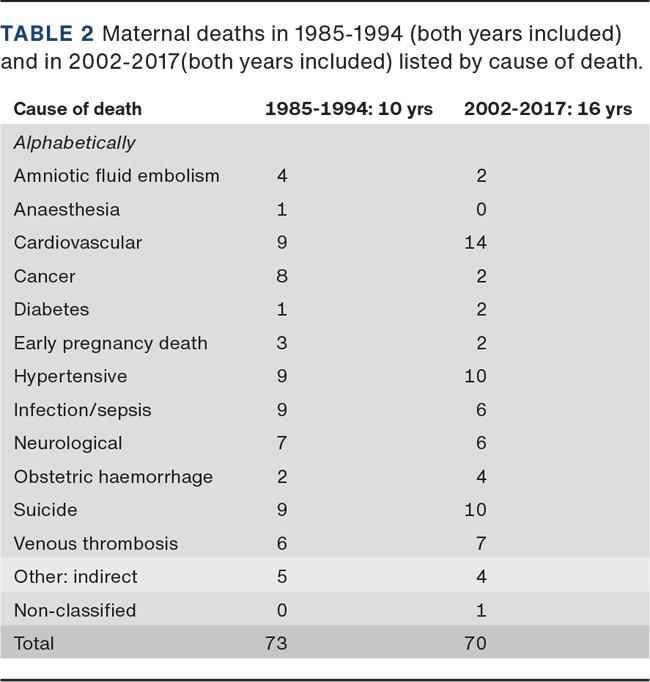 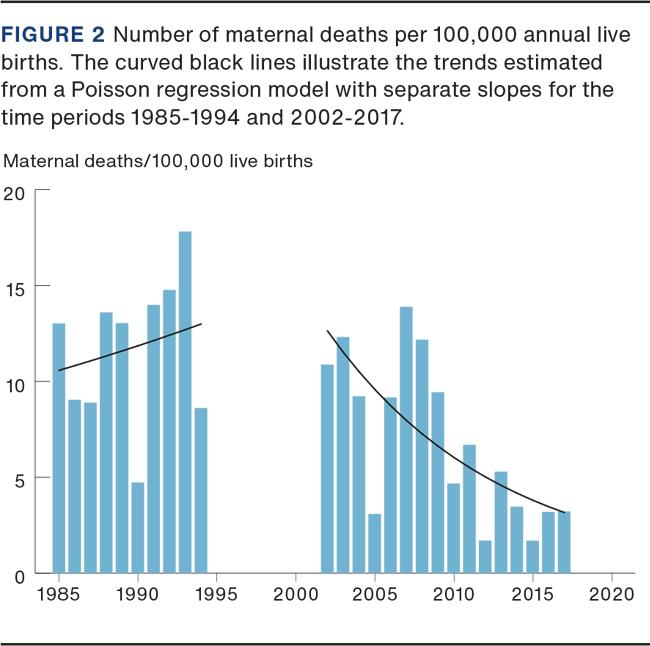 Our study found a significantly higher MMR for the 1985-1994 period than for the 2002-2017 period. A non-significant increase in MMR was observed in the 1985-1994 period, and a significant decrease in MMR from 2002 to 2017. Multiple factors may have contributed to this decrease. Importantly, overall organisational changes in Denmark over the past 20 years have led to fewer obstetric wards, larger obstetric centres with in-house obstetricians and close collaboration with a broad spectrum of other medical specialties. Furthermore, based on the involvement of obstetricians representing all obstetric departments across the country since 1997, national obstetric guidelines have been developed that are fully accessible online and widely used [15]. This has ensured a uniform approach regarding prophylactic measures during pregnancy and in the prevention and management of severe complications, e.g. preeclampsia, haemorrhage, thrombosis and sepsis.

Obstetric simulation with multi-professional team training has been identified as a contributing factor in improving maternal and perinatal morbidity and mortality [16]. Since the turn of the millennium, it has become more widespread at many hospitals [17] and it has been an integral part of specialist obstetric education programmes since 2001.

Moreover, as recommended by a 2003-2005 report released by the Confidential Enquiry into Maternal and Child Health (CEMACH), the Modified Obstetric Early Warning Score (MOEWS) was implemented in most parts of Denmark during the second period under study [18]. Studies indicate that the MOEWS, which takes the physiology of pregnancy into account, is effective in predicting severe morbidity in a general obstetric population and mortality in critically ill obstetric patients, just as it may prevent obstetric morbidity from progressing into a critical illness [19].

In accordance with findings in the other Nordic countries and the UK, cardiac death was the leading cause of death throughout the two periods covered by our study [2, 4].

The only cause of death that did not decrease was suicide, exposing the need to maintain a continuous focus on perinatal mental illness. Reports on maternal death from the UK repeatedly emphasise that severe disadvantage increases the risk of dying from a pregnancy-related condition [3, 18]. Unfortunately, we were unable to corroborate this in our study as information on ethnicity, education, household income, marital status and employment could not be extracted from the four registers and was not reported systematically in the medical records.

Earlier studies have reported on maternal mortality in Denmark. Historically, Brandstrup found that MMR decreased from 170 per 100,000 deliveries in 1941 to 60 in 1951 [20]. In a study from 1992, Jessen found an MMR of 11.4 per 100,000 live births from 1970 to 1979, but comparison with our study is not meaningful as he did not include deaths before 28 weeks of gestation and identification of deaths was based on death certificates only, with no register linkage. When compared to national health statistics, maternal deaths were underreported by 50%.

Several studies from various countries have shown that maternal deaths are often underreported, even in countries with established health registers [9-12]. For example, in Norway underreporting was found in 44% of cases from 2005 to 2009 when comparing official data to data from register linkage [11]. In Sweden, Esscher et al found underreporting in 64% of cases from 1988 to 2007 when linking registers and death certificates and comparing these to official data reported to the WHO [12]. In our study, data were derived by linking four registers and data from death certificates. Taking into consideration the underreporting of deaths documented in the above countries, we initially decided to ask for direct reporting from obstetric departments to combine these with register data. After assessing five years of direct reporting and comparing it to register-based data, it became clear that direct reporting failed to pick up several deaths identified by register linkage. Especially deaths in early pregnancy and after discharge from maternity wards and deaths in emergency units, intensive care units and outside hospitals were not reported. During the periods under study, no maternal deaths were discovered that had not already been identified when the four registers were linked. Accordingly, we concluded that our strategy with register linkage had a very high sensitivity.

We used death certificates for further identification of maternal deaths in both periods. This added important information about deaths in 1985-1994 and in the early years of the second period, especially when there was no access to forensic reports from legal autopsies. The implementation of electronic death certificates made this step obsolete as from 2008, the information is readily available in the Cause of Death Register. Furthermore, in Danish death certificates, it is not mandatory to indicate whether the woman was pregnant at the time of death or within the year leading up to her death. If added, this type of information would facilitate effective identification of maternal deaths and ought to be reconsidered by the authorities. When the CEMD requested this, it was implemented in the UK. Similar initiatives have been discussed in the Nordic countries but have currently only been implemented in Iceland.

Based on linkage of four national health registers in combination with death certificates and validation by case audit, we found a significant decrease in maternal mortality from 1985 to 2017. Incorporating this approach into annual delivery of openly accessible quality data would make ongoing surveillance of maternal mortality in Denmark possible. This will support organisational and medical strategies for good obstetric care to achieve a continuous decrease in MMR.

Correspondence Birgit Bødker. E-mail: bib@dadlnet.dkAccepted 9 July 2021Conflicts of interest none. Disclosure forms provided by the authors are available with the article at ugeskriftet.dk/dmjAknowledgements We take this opportunity to thank Statistician Steen Rasmussen for his support with the search strategy and linking the registers. Furthermore, we express our gratitude to the Danish Society of Obstetrics and Gynaecology for supporting and financing the 2002-2020 audit meetings and to Research Assistant Jane Hybschmann-Nielsen for assistance with the references.References can be found with the article at ugeskriftet.dk/dmjCite this as Dan Med J 2021;68(9):A02210143