The 1-year mortality of cirrhotic patients with hepatic encephalopathy (HE) is very high, approaching 60-80% in recent studies [1, 2]. Mortality results not only from cirrhosis-related causes such as variceal bleeding, hepatorenal syndrome or hepatocellular carcinoma; comorbidities also contribute significantly [3]. Survival in decompensated alcoholic cirrhosis patients depends on the correct and prompt treatment of complications and on abstinence from alcohol. Sussmann and colleagues reported that a patient education programme was associated with beneficial lifestyle changes in alcoholic liver disease [4].

To our knowledge, no data exist on the effect of creating a rehabilitation clinic for patients with severe alcoholic liver disease. Inspired by a pilot project at another Danish hospital (Holbæk Sygehus), we aimed to establish a rehabilitation out-patient clinic (RC) for alcoholic cirrhotic patients surviving HE. This clinic should include frequent visits and easy access to the clinic in case of any liver-related or other symptom in the patient. In this manner, we aimed to prevent the further development of HE and improve survival.

Prospectively, starting 1 September 2009 and one year forward, patients surviving HE who were able to leave the hospital were offered participation in the RC. The diagnosis of cirrhosis was established according to standard criteria [5]. The presence of HE was confirmed by at least two experienced hepatologists in each case [6, 7]. Medical care included proton pump inhibitors, lactulose, intravenously and orally administered fluids and glucose and antibiotics when needed. Hepatorenal syndrome and oesophageal varices were treated according to guidelines [5, 8-10]. The patients were compared with HE patients discharged from the Department in 2008.

The clinic is located in a room at the Department. All patients were seen by a trained nurse for a one-hour session within 1-3 weeks after discharge and by a physician, if needed. Clinical, psychological and social problems were identified and addressed, the latter often with the help from a nurse seeing the patient in his or her own home. Alcohol consumption was recorded and alcohol cessation was encouraged at each visit. Blood pressure, heart rate and weight were recorded at each visit. Ascites was treated according to standard criteria. Minimal or overt HE prompted referral to the Liver Unit.

An ‘alcohol school’ was held for some patients with alcohol-induced cirrhosis and their relatives. This included information from a physician, a nurse and a dietician on the harmful effects of alcohol.

Special emphasis was given to the patients’ social problems and needs. Two employees (JM, SS) from the Social Services of Copenhagen formed part of this study and took a special interest in the patients in terms of housing, economic, medical, and other needs. Close cooperation between the Social Services and the Rehabilitation Clinic was established.

Nineteen patients fulfilled the criteria for inclusion in the study and all accepted inclusion in the RC group. They were compared with 14 patients in the control group. The model of end-stage liver disease (MELD) score, age, proportion of patients with other complications (oesophageal varices, ascites), HE grade, ammonia levels and other biochemical parameters did not differ between the two groups (Table 1). The Child-Pugh score was higher in the RC group (median 13; range 8-14) than in the control group versus (median 11; range 7-13) (p = 0.033).

To our knowledge, this paper is the first to describe the effects of a rehabilitation clinic for cirrhotic patients surviving HE. We demonstrate an improved survival for these patients; an improved survival that was remarkably high compared with the poor survival reported in most published series [1-3]. The improvement was achieved with relatively simple means, primarily in the form of increased attention to the patients’ need for medical treatment, alcohol abstinence, and attention to their economic and social problems.

We recorded a marked reduction in alcohol consumption for most patients attending the Rehabilitation Clinic since only two patients did not reduce alcohol intake. However, we do not have enough data for the control group to decide if this reduction was a result of the Rehabilitation Clinic or just a normal reaction pattern for patients surviving such a serious complication as HE [11] since we were unable to gather reliable data on subsequent alcohol consumption for this historic control group.

The study may have been biased in several ways. Firstly, the number of patients in the study was not very high which increases the possibility of type I error [12]. We plan to continue including patients to our rehabilitation clinic and future data may therefore be more accurate. Secondly, this was not a randomized controlled trial since we included patients by cohort. Thirdly, patients were compared with historic controls for whom data were recorded retrospectively. The retrospective data were probably more inaccurate than the prospective data we gathered for the patients included in the rehabilitation clinic.

If we assume that the improved survival for rehabilitation patients is a real trend, then what is the explanation for this improvement? Decreased alcohol consumption may be part of the explanation since alcohol cessation is known to improve liver function even in cases of advanced cirrhosis [11, 13-15]. Other medical conditions related to alcohol intake may also improve when alcohol consumption decreases [16]. The attention from dedicated nurses on an almost weekly basis may have increased patient compliance even though we do not have data to support this. Similar findings have been shown in a Danish randomised trial of brief intervention to improve alcohol abstinence [17]. Also, the special attention from Social Services increased the chances of stable housing and economic conditions, and thus indirectly increased the likelihood of medicine compliance. Finally, the almost weekly visits gave us an opportunity to evaluate the patients very frequently, to correct electrolyte imbalances early and to refer quickly to hospital when complications such as minor or overt HE or hepatorenal syndrome occurred. In this way, early treatment could be instituted.

Interestingly, the number of subsequent hospital admissions and the economic costs related to these admissions did not increase in the rehabilitation group despite the prolonged survival. Since the economic costs for the rehabilitation clinic itself were incorporated into the budget of the Department, the observed increased survival did not lead to increased expenses.

In conclusion, the rehabilitation clinic for patients surviving an episode of HE improved survival. This was probably owed to a combination of factors, including decreased alcohol consumption, more attention to complications, and improved social possibilities. In this study, the economic costs related to improved survival were not higher than those related to standard care. Further randomized studies on a larger number of patients surviving HE are needed. 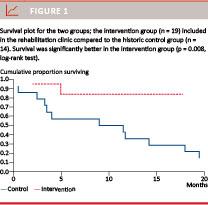 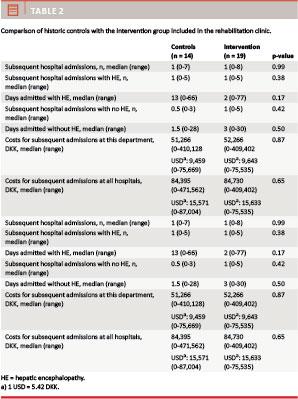 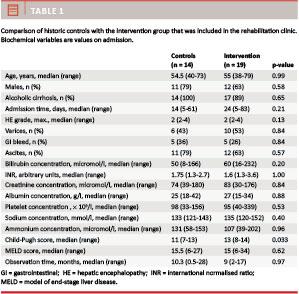