Rickettsial infections are an unlikely cause of peripheral facial palsy in Southern Jutland, Denmark

Peripheral facial palsy (PFP) is a common diagnosis with annual incidence rates of 20-53 per 100,000 people [1, 2]. PFP has been associated with conditions such as diabetes [3], pregnancy [4] and various infectious aetiologies. Most notably, infection with herpes simplex virus (HSV) [5, 6] but also herpes zoster virus (HZV) [6] and different vector-borne microorganisms like Borrelia burgdorferi [7, 8]. However, the aetiology of most solitary PFP remains unrecognised, a condition commonly known as Bell's palsy [2]. Rickettsiosis caused by transitional group rickettsia, spotted fever group rickettsia (SFGR) and typhus group rickettsia has been proposed as a cause of PFP. This was based on findings from a Swedish study suggesting Rickettsia felis [9], a Greek study suggesting R. conorii [10] and an Israeli study suggesting R. typhi [11] infection in PFP patients. Rickettsiae are vector-borne obligate intracellular bacteria, primarily infecting vascular endothelial cells in vivo [12]. The vastly more common Rickettsia species in Denmark is R. helvetica found in the tick species Ixodes ricinus [13]. Neither R. felis nor R. conorii has been identified in autochthonous cases or vectors in Denmark, but R. felis has been identified in neighboring Sweden [9] and Germany [14]. The aim of this study was to investigate proposed infectious causes of PFP in a Danish setting.

The patients had serum and CSF examined; the control group only had serum examined as no lumbar puncture was performed on this group.

Serum and CSF from PFP patients were refrigerated at 5 ⁰C until routine testing for infectious agents (B. burgdorferi, HSV and VZV). Before additional testing for rickettsiosis, serum from PFP patients was stored at –20 ⁰C and CSF at –40 ⁰C until serological and PCR analysis. Serum from blood donors was stored at –20 ⁰C until serological analysis for borreliosis and rickettsiosis.

Serum from patients and blood donors was tested for anti-B. burgdorferi immunoglobulin (Ig)M and IgG antibodies on the LiaisonXL system using chemiluminescence immunoassay (Diasorin, Saluggia, Italy) according to the manufacturer’s instructions; testing for anti-rickettsial IgG and IgM antibodies was done with immunofluorescence microscopy using slides prepared with R. helvetica and R. felis as previously described by Jensen et al. [15].

Cerebrospinal fluid analysis (only in patients)

Intrathecal production of anti-B. burgdorferi IgM and IgG antibodies was evaluated with the antibody assay previously described (Diasorin) by measuring the index between levels of antibodies in serum and CSF using the following formulas (see image):

Formulas for measuring the index between levels of antibodies in serum and CSF.

An index > 1.5 was considered positive in accordance with the manufacturer’s instructions.

DNA was extracted from the CSF using the MagNA Pure 96 DNA and Viral NA Large Volume Kit (Roche Diagnostics, Mannheim, Germany) before testing for the presence of HSV 1, HSV 2 and VZV genetic material with an in-house reverse transcription polymerase chain reaction (RT-PCR) test at the Department of Clinical Microbiology, Odense University Hospital, Denmark. For HSV1 and HSV2, a segment in the glycoprotein B region was targeted as described by Namvar et al. [16]. The VZV targeted a sequence in the Open reading frame 30, encoding hacking terminase subunit 2. Testing was done on the Roche Flow Solution (Roche).

Prior to testing for SFGR, genomic material CSF was centrifuged for 10 min at 15,000 g and the supernatant was partly removed, leaving approximately 200 µl and the pellet as described by Ocias et al. [17]. DNA was extracted using the VIASURE RNA/DNA Extraction Kit (Certest Biotec SL., Zaragoza, Spain). Testing of the CSF was done with VIASURE Tick-Borne Diseases RT-PCR detection kit (Certest Biotec) targeting a conserved region of the SFGR 23S ribosomal RNA gene. Extraction and analysis were performed according to the manufacturer’s instructions. The analysis was done on the StepOne Plus Real-time PCR System (Applied Biosystems, Waltham, USA).

Statistical analysis was done with the Stata16 software package. For comparison of categorical variables in groups, odds ratios were calculated, and a χ2-test was performed on larger groups, and Fisher’s exact test was performed if groups were small. A two-sample t-test was used on numerical variables after testing for equality in variances. A p-value < 0.05 was considered significant.

Trial registration: The study population and the control group were approved by the Regional Committees on Health Research Ethics for Southern Denmark (S-20170136 and S-20170049) and by the Danish Data Protection Agency (17/31901 and 18/28928). All participants provided informed consent before being enrolled in the study.

A total of 20 patients with solitary PFP were included in this study from December 2017 to November 2018 (Figure 1). However, one patient withdrew consent (reason unknown). A total of 29 blood donors were included during June 2018. Three patients reported redness around the tick bite, but did not explicitly report erythema migrans. Sixteen patients were treated with prednisolone (50 mg daily for ten days). One patient was pregnant, and the disadvantage of prednisolone treatment was assessed to exceed its advantages. Another patient was not treated with prednisolone, as the time since onset of symptoms exceeded 72 hours at admission. Time from onset of symptoms to hospital admission and testing was < 72 hours in 18/19 patients. One patient was unable to provide time of onset, but it exceeded 72 hours. 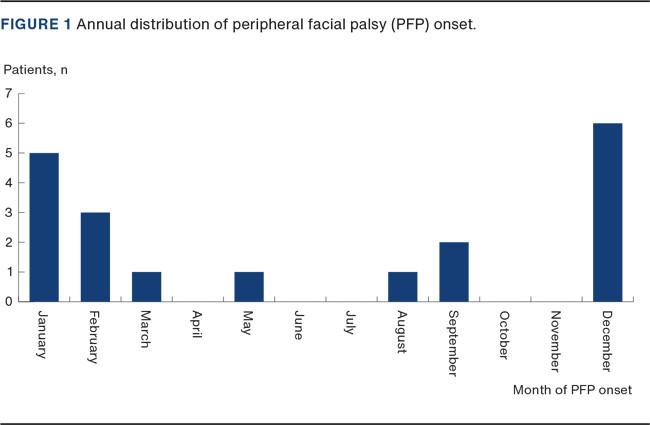 One 64-year-old woman was diagnosed with PFP due to neuroborreliosis (NB). She was referred to the department one day after PFP debut, but she had suffered from headaches and dizziness two weeks prior. Analysis of CSF showed a mononuclear leukocytes level elevated to 100 × 106/l and low polynuclear leukocytes consistent with NB. She had a positive B. burgdorferi IgG antibody index test, suggesting intrathecal antibody production but a negative serological test for anti-B. burgdorferi antibodies and normal P-Leucocytes and C-reactive protein. She was treated with intravenous ceftriaxone followed by oral doxycycline. None of the participants had paraclinical evidence of infection with either HSV1, HSV2, VZV or rickettsiae (Table 1). Recent myalgia was significantly more common among PFP patients than among healthy controls. Recreational outdoor activities were more common among healthy controls, whereas both pets and tick bites within a year was more common among PFP patients, though this finding did not reach significance. More than half of the PFP patients had experienced recent fatigue; none of the healthy controls reported this symptom. A positive serological analysis of anti-B. burgdorferi antibodies was present only in the control group (Table 1). The sex and age distribution was comparable between PFP patients and healthy controls, indicating well-matched groups (Table 1). All participants were from the UHSD, providing an appropriate geographical match. The seasonal variation showed that the vast majority of patients had onset of PFP in the winter months, n = 14 (73.7%), whereas the patient with NB was the only one with onset in the summer months (Figure 1). 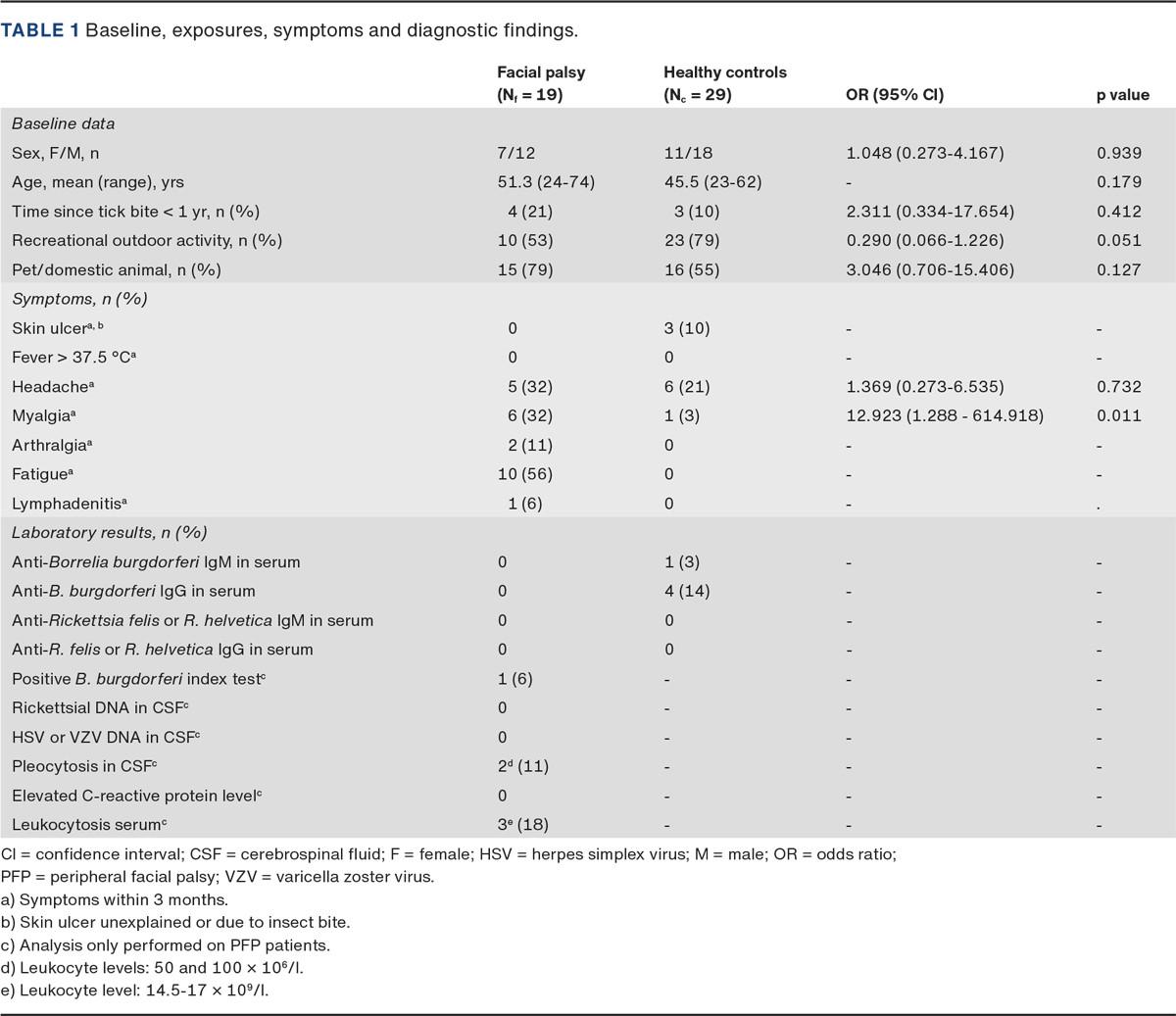 In this study, we included 19 patients within a year. Most patients were treated with prednisolone without aciclovir or antibiotics. Currently, this treatment is recommended because of the available evidence [18], if given within 72 hours and provided that no infectious causes have been identified or are suspected, due to, e.g., a history of recent tick bite, radicular symptoms [7], blisters in the ear or CSF pleocytosis. Only one patient was diagnosed with NB. However, as patients with obvious radicular symptoms typical of NB [7, 8] were not included (the study was based on solitary PFP, and presenting additional neurological symptoms would lead to exclusion), this will have lowered the number of NB patients. The patient had a positive anti-B. burgdorferi antibody index providing evidence of intrathecal antibody production, but had a negative serum test which emphasises the need for a lumbar puncture if NB is suspected. This is necessary as the production of a serological antibody response above the test cut-off may be delayed beyond the point of a positive index test [19]. The PCR method of testing CSF for the presence of pathogens may not be optimal in the work-up of PFP patients considering the potential underlying pathology. Herpes simplex DNA is rarely found in the CSF of PFP patients [6] but in the posterior auricular muscle or endoneurial fluid of the facial nerve [5, 6].

Despite finding R. felis DNA in the CSF of two out of the five tested patients in a Swedish study [9], the pathological process remains unclear. Rickettsial invasion of the endothelial cell lining of the microvasculature in the vasa nervorum may cause vasculitis with swollen endothelial cells. This may potentially compromise the arterial blood supply to the facial nerve, thereby causing dysfunction [20]. This would not necessarily be recognised by testing the CSF. Our study was unable to reproduce the Swedish results that suggested R. felis as a potentially important cause of PFP [9]. This may be because R. felis is not present in Denmark despite being found in our neighboring countries. This is in concordance with results from a longitudinal study on blood donors from the same region as our participants, including our control group, indicating a low incidence (0.8% per tick season) of rickettsiosis in Southern Jutland, but none with presence of anti-R. felis antibodies [15]. The low incidence represents a risk of missing rare cases of rickettsiosis in our study due to the limited sample size. A previous Danish study on archival samples reported evidence of rickettsial DNA by PCR analysis in the CSF of 4% of suspected NB patients, including three patients with confirmed NB and PFP. However, the cycle threshold values were high and, unfortunately, species could not be determined [17]. Another Danish study reported prevalence of anti-R. helvetica antibodies in 12.5% of tested borreliosis patients [13]. However, only one patient in our study had evidence of tick-borne infection, making comparison difficult. Rickettsia felis, the suspected causative agent of PFP in the Swedish study [9], is usually not considered tick-borne, unlike B. burgdorferi and R. helvetica.

The cat flea Ctenocephalides felis felis is a vector of R. felis [14], making pets a potential risk factor, but no significant difference in pet ownership was found between PFP patients and healthy controls and no rickettsiosis symptoms like fever, eschar or rash were present. Most patients in this study experienced onset of PFP during the winter months. Infectious agents were not identified in any of these patients and previous studies have not reported distinct seasonal variation [7]. The study was limited by the relatively low number of patients included, the lack of follow-up and thereby an inability to obtain convalescence sera. Additionally, a control group providing CSF would have strengthened the study, but this was not obtainable.

The majority of solitary PFP cases in our study remain of unknown or undetectable origin if standard diagnostic measures are used. Rickettsiosis seems unlikely as a major cause of PFP in Southern Jutland, Denmark, and hence treatment with anti-rickettsial drugs like doxycycline is not currently recommended unless NB is suspected.

However, further studies of the infectious aetiology of PFP are needed and should be designed to ensure sufficient sample size, choice of control group/material, diagnostic measures and treatment response to establish causality.

Correspondence Bo Boedker Jensen. E-mail: d060471@dadlnet.dk*) Contributed equally.Accepted 6 May 2022Conflicts of interest Potential conflicts of interest have been declared. Disclosure forms provided by the authors are available with the article at ugeskriftet.dk/dmjAcknowledgements We thank the Department of Biochemistry at the University Hospital of Southern Denmark for assisting with sample collection. Furthermore, we thank the staff at the Blood Bank of the University Hospital of Southern Denmark and Mie Topholm Bruun from the Department of Clinical Immunology, Odense University Hospital, for assisting with the control group. Cite this as Dan Med J 2022;69(9):A07210575