Systemic lupus erythematosus (SLE) is a chronic autoimmune rheumatic disease that may affect multiple tissues and organ systems, e.g. joints, cardiac and neurological systems. The clinical presentation of SLE is heterogeneous. It has a female preponderance and its incidence peaks at the age of 20-29 years [1].

Mental health is important for the individual’s level of physical activity, and studies have demonstrated that any level of physical activity may prevent future depression [5]. A systematic review found that prevalence estimates of depression in SLE patients varied widely from 2% to 91.7%, measured with a range of different assessment tools, including questionnaires like the Beck Depression Inventory and classification systems including the Diagnostic and Statistical Manual of Mental Health (DSM) [6]. A meta-analysis of studies on depression in SLE based on the DSM or the International Classification of Diseases (ICD) showed a prevalence of 24% (95% confidence interval (CI): 16-31%) [6]. A study of the Danish general population using the Major Depression Inventory (MDI) showed a prevalence of 2.3% [7].

The aim of this study is to describe patterns of self-reported physical activity in a population with SLE.

A cross-sectional study was conducted at the Department of Rheumatology at Odense University Hospital, Denmark, between October 2018 and September 2019. The study population included Danish SLE patients from a cohort followed since 1995 in which data on patient characteristics such as age, gender, disease duration, etc. were collected. Patients who were unwilling or did not have the skills to answer questionnaires were not included.

The study was conducted as a part of a study approved by the Local Ethics Committee (project ID:S-20100015) and was approved by the Regional Data Protection Agency (18/21749).

Two questionnaires were handed out to the patients before routine outpatient consultation: the self-administered International Physical Activity Questionnaire (IPAQ), which was used to collect data about physical activity, and the MDI questionnaire, which was used to screen for depression. Information on present hydroxychloroquine and prednisolone intake was registered, but no information regarding medicine doses or other immunosuppressive treatment was accessible. Disease activity and damage were scored by the Systemic Lupus Erythematosus Disease Activity Index (SLEDAI)-2K [8] and the Systemic Lupus International Collaborating Clinics/American College of Rheumatology Damage Index (SLICC/ACR DI) [9].

Data from the IPAQ were reviewed according to recommendations [11] and reported physical activity of less than 10 min. was categorised as 0, but the patients were not excluded. Daily average physical activity above 180 min. in a category (walking, moderate or vigorous activity) was truncated into 180 min. to avoid misclassification in the high level of physical activity category [11]. If the moderate activity category was truncated, the MET score was calculated from a chosen standard of four METs. Patients reporting a total score above 960 MET-min./week were excluded.

To define potential explanatory variables, a univariate linear regression model was applied. To consider non-normality of the residuals, bootstrapping with 1,000 repetitions was applied, and a univariate regression adjusted for age was made. Even though data on time spent sitting was collected with the IPAQ, these data were not included in the calculation of the MET score; therefore, it was considered an independent variable and could be included in the univariate regression. A multivariate analysis was performed including the following possible predictors: SLICC/ACR DI, SLEDAI-2K, MDI score, time spent sitting, gender, age, disease duration and treatment with hydroxychloroquine or prednisolone.

The analyses were conducted in Stata 15.0.

A total of 215 patients completed the IPAQ and MDI questionnaires. Two patients declined to participate in the study. The characteristics of the study population are presented in Table 1. 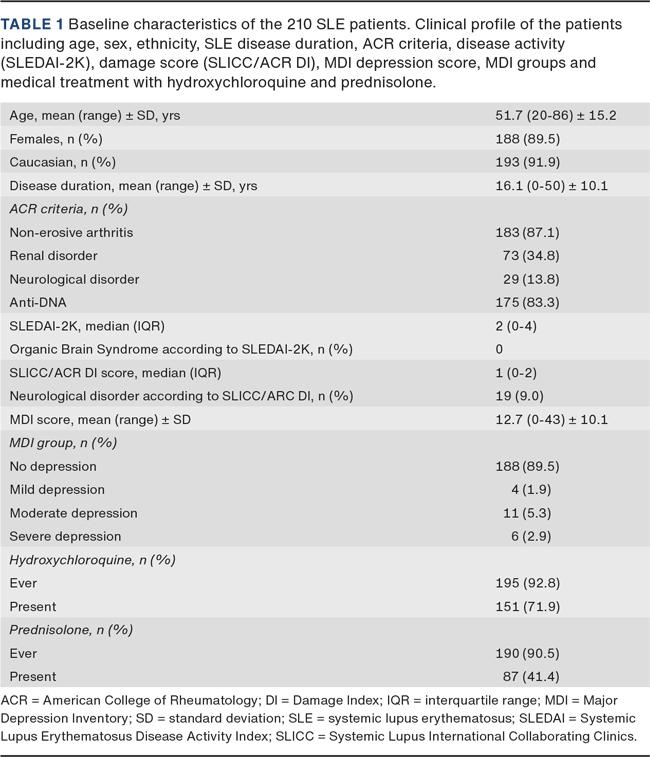 Five patients were excluded in the data cleaning process according to recommendations as they reported more than 960 min. of physical activity per day. The remaining 210 patients reported a mean total MET score for physical activity of 5,319.9 ± 3,650 MET-min/week with an average of 194.3 ± 118 physically active minutes per day. Regarding sedentary behaviour, the participants reported 363.7 ± 201 min. per day of sitting time (Table 2). 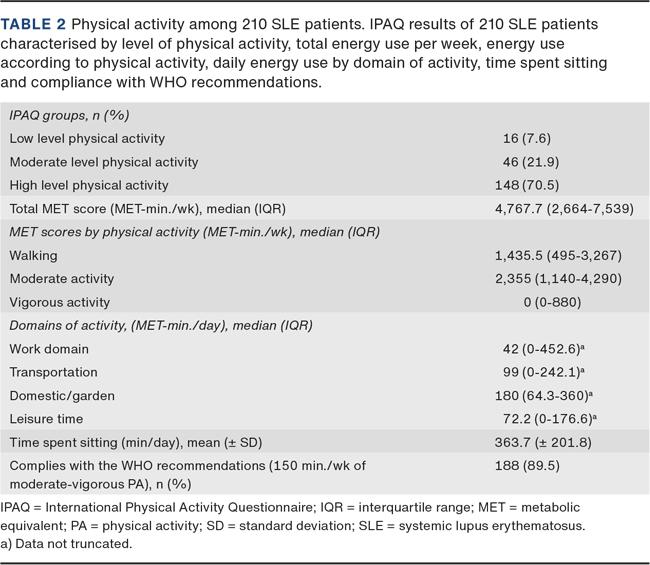 The distribution of total energy use per week in each of the domains is shown in Table 2. The patients reported the highest level of physical activity in the domestic domain (180 MET-min/day) and the least in the work domain (42 MET-min./day). The highest energy use was achieved through moderate activity (2,355 MET-min./week).

The mean MDI score was 12.7 ± 10.1; and if divided into groups, 89.5% were classified as not depressed, 1.9% had a mild depression, 5.3% a moderate depression and 2.9% a severe depression (Table 1). Mean MET scores in the four MDI groups showed that the severely depressed patients had significantly lower scores although this group only included six patients, whereas the three other groups did not differ (Table 3). 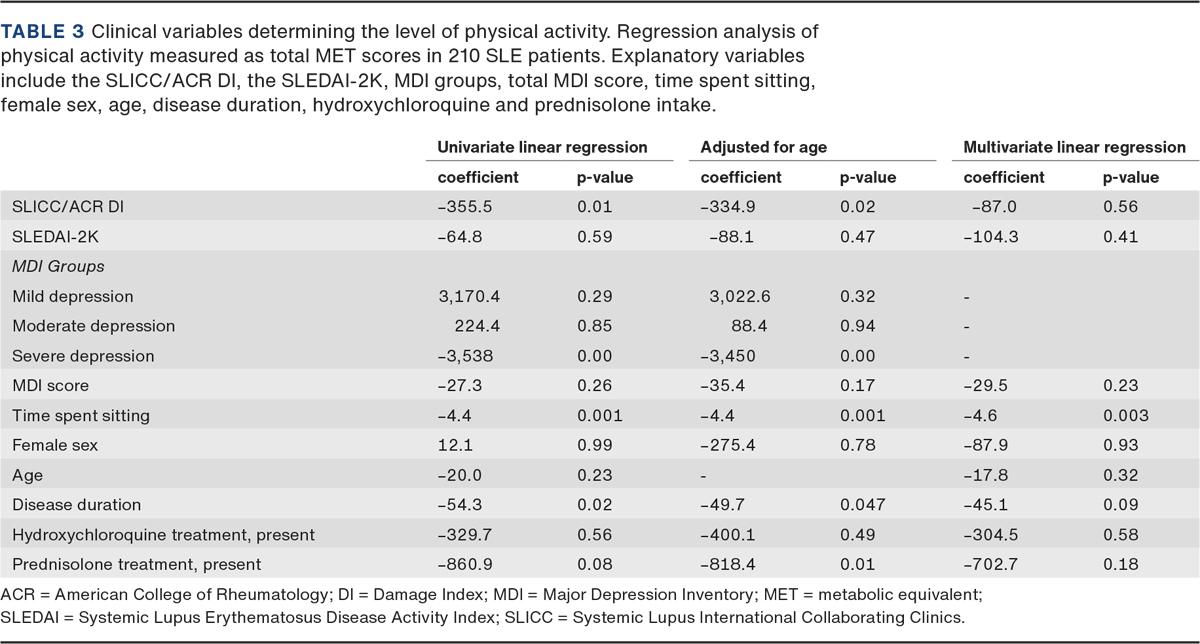 In the multivariate analysis, only time spent sitting was significantly associated with MET scores.

Among 215 Danish SLE outpatients, 89.5% reported to meet the WHO’s recommendations for physical activity; according to the IPAQ description, 70.5% of the patients belonged to the category high level of physical activity.

The high level of physical activity among our patients is in line with a Brazilian study in which the IPAQ was used and which reported that 68% of the SLE patients were “physically active”, 12% “irregularly physical active” and 20% “physically inactive” [15]. Conversely, an Italian study that also used IPAQ on SLE patients found that 44% had a low, 34% a moderate and 22% a high level of physical activity. The difference may be explained by higher disease activity among Italian patients measured as an SLEDAI-2K mean 3.6 [4] compared with the Brazilian SLE patients’ mean score of 1.5 and a mean SLEDAI-2K of 2.4 in the present study.

A recent Canadian accelerometer study comprising 100 SLE patients reported that only 11% of their patients met the WHO recommendations, which is considerably lower than the 89.5% in this study. An accelerometer tracked the Canadian patients’ physical activity, showing most time spent on light physical behaviour (mean 134 ± 38.3 min./day) and less on moderate-vigorous physical activity (mean 33.2 ± 22.5 min/day) [16]. Our patients self-reported most energy used per week (MET-min./week) during moderate physical activity.

A study assessed physical activity with the IPAQ in the Danish general population; the mean total time spent was 1,604 ± 957 min. per week [17]. This is opposed to our patients who reported an average of 1,360 min. per week. The general population included healthy people, a higher proportion of men (38.2% versus 10.5%) and a lower average age (39.3 versus 51.7 years) than our cohort [17]. Despite these differences, SLE patients apparently report lower physical activity than the general Danish population.

A validation study found that the Danish version of the IPAQ had modest validity and reliability [12]. A study has compared the IPAQ and accelerometry data on individuals from six countries; Danish participants reported the highest total score for MET-min./week and recorded the highest discrepancy between self-reported and accelerometer-measured physical activity [17]. It is therefore possible that the Danish version of the IPAQ questionnaire tends to make participants overestimate activity.

Physical activity measured as total MET scores was inversely associated with disease duration. Nevertheless, in daily clinical practice, it is of interest that potentially adjustable factors such as sedentary activity and to some extent SLICC/ACR DI scores have a significant impact on physical activity. Therefore, advice to the patient about reducing sedentary activity along with a targeted clinical effort for lower damage accrual is indicated in the lupus clinic [5, 18].

Our results found the six severely depressed patients to report a significantly lower physical activity, but the number is too limited to conclude as to any association. Furthermore, no association was found for SLE patients with mild or moderate depression. Similarly, the regression analysis did not find the depression score to be associated with the physical activity score, although reservations must be made given the low number of depressed patients. Studies on non-SLE populations have indicated that women with a low level of physical activity, in particular, may have an increased risk of depression compared with more physically active women [20]. It may therefore be relevant to encourage SLE patients to be physically active in order to potentially prevent depression and to achieve other effects of exercise, e.g. a reduced risk of cardiovascular disease [16].

It is a strength of our study that the patients had well-established SLE diagnoses and that the validated Danish language questionnaires were answered and handed in immediately in the outpatient clinic. As data were collected throughout a calendar year, no seasonal alterations are expected. Furthermore, only two patients declined to participate and therefore probably did not cause any bias. It is a weakness that our study was cross-sectional and thus unable to analyse causality. The results may indicate that patients reported a higher physical activity than was actually performed, but possible explanatory parameters such as cognitive deficits among SLE patients were unfortunately not available for analysis. Another consideration may be that some individuals perceive physical activity as a prestigious behaviour, which might make them overestimate their answers.

Correspondence Anne Voss. E-mail: Anne.voss@rsyd.dkAccepted 12 November 2021Conflicts of interest Potential conflicts of interest have been declared. Disclosure forms provided by the authors are available with the article at ugeskriftet.dk/dmjCite this as Dan Med J 2022;69(2):A04210363