Complex regional pain syndrome (CRPS) is a devastating condition characterised by pain exceeding considerably what would normally be expected after a lesion or trauma. The pain is regional and is unrelated to a specific nerve innovation area or dermatome [1-3]. CRPS is grouped into CRPS type 1 (CRPS-1) – Without evidence of nerve damage, and CRPS type 2 (CRPS-2) – With evidence of nerve damage [2, 3]. To obtain a CRPS diagnosis, patients must meet the Budapest criteria (Table 1). 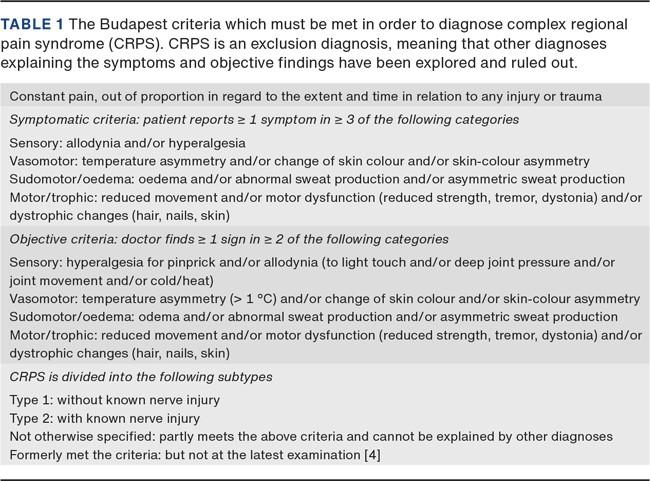 Treatment of CRPS is highly specialised and usually handled by interdisciplinary pain clinics. The treatment aims to 1) reduce pain, 2) improve function, 3) manage physiological factors and everyday life, and 4) enhance quality of life (QoL) [4]. If conservative treatment focusing on pharmacological pain relief, physiotherapy and psychological coping fail, the use of neuromodulation by spinal cord stimulation (SCS) can be an option [5-11]. SCS is a treatment in which electrodes are placed in the epidural space, between the spinal cord and the vertebrae. An implantable pulse generator (IPG), a pacemaker-like battery, induces electrical pulses that generate a weak electrical field that stimulates the dorsal columns of the spinal cord. This evokes a stimulation with or without peripheral paresthesia and thereby alters the sensation of pain [8, 9]. However, studies on the effect of SCS treatment for CRPS-2 are few.

During the period from September 2014 to January 2019, a total of 32 CRPS patients received treatment with SCS at Aalborg University Hospital (AaUH). In all, 19 of the patients had a CRPS-2, diagnosed by either the surgeon or the anesthesiologist at the pain clinic. The diagnosis was verified by retrospective review of the medical records applying the Budapest criteria [4], as presented in Table 1. Furthermore, all patients had prior trauma or surgery at the affected area. Thus, the inclusion criterion was patients with retrospectively verified CRPS-2. The exclusion criterion was insufficient data. Two patients were excluded due to insufficient follow-up and one patient died before the six-month follow-up due to non-related causes. Accordingly, a total of 16 patients (nine male (56%) and seven female (44%)) were enrolled, and their age at implantation was between 31 and 63 years (mean 45.4 years).

All patients who underwent SCS treatment at the AaUH were required to participate in a pre-surgical examination and were invited to a minimum of two post-surgery follow-ups after six months and between 12 and 24 months (12+-month follow-up) after their SCS implantation. At these sessions in the outpatient clinic, average pain and medication were noted. Furthermore, patients were asked to complete the questionnaires before these appointments or were asked to complete the questionnaires and send them to the outpatient clinic after the visit. The data were registered in the Neurizon Neuromodulation Database [12] from where the data used in this study were extracted. All patients signed a consent form allowing the use of their data before they were added to the Neurizon Neuromodulation Database. Furthermore, the database is approved by Danish Regions and the Danish Data Protection Agency (#1 – 16-02-109-11).

The numerical rating scale (NRS) was used to evaluate patients’ average daily pain, 0 (no pain) to 10 (worst imaginable pain). The data were checked for normal distribution by use of QQ plots and found to be normally distributed. The effect of SCS on NRS was evaluated by paired t-test, performed in Excel, comparing the pre-surgery and the two post-surgery scores. With respect to use of pain medication, we studied opioid use (measured by equivalent dose) [13].

Seven patients (43.8%) underwent additional surgery due to suboptimal placement/low effect, one of whom had several electrode revisions. Two patients also had surgery in relation to their IPG. One patient suffered respiratory arrest due to anaesthesia; the arrest was fully reverted. One patient had the system explanted due to low/no effect.

In the included 16 patients, we recorded no infections, nerve damage or dural punctures.

We found that eight patients, corresponding to half of the patients included in this study, had a clinically significant reduction of pain with a reduction of NRS score of three or more [14]. Six patients (37.5%) had a reduction of 1-2 NRS points. Two of the 16 patients (12.5%) had no effect or a poorer NRS score outcome than before their surgery. 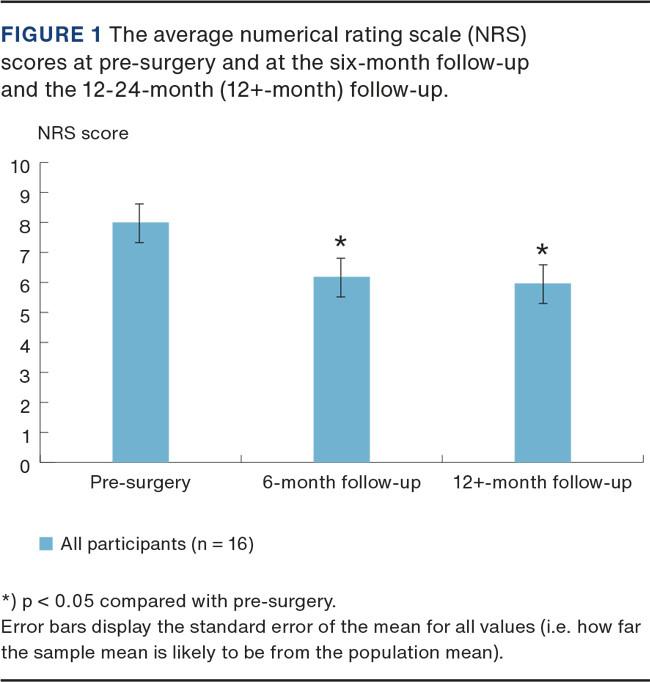 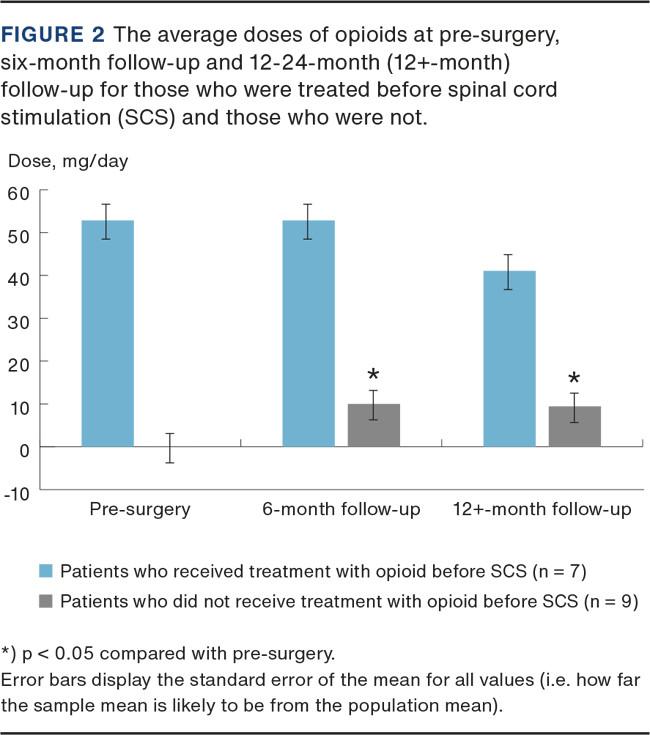 In a study by Forouzanfar et al. discussing meaningful pain reduction in patients with CRPS-1, it was suggested that the effect needs to be a relative reduction by 50% or a decrease in VAS-score of ≥ 3 to be considered effective [14]. Accordingly, half the patients included in our cohort were considered to have a significant effect of SCS on their pain as they had a reduction of three NRS points or more. A similar pain reduction by SCS was described in CRPS-1, where it was shown that 41% had a more than 30% pain reduction [5].

Changes in the average daily intake of opioids were small and non-significant (Figure 2), especially taking the number of subjects into account. We found no evidence to suggest that the pain relief experienced by the patients treated with SCS was owed to additional pharmaceutical treatment and thus conclude that the pain relief was accomplished by SCS treatment. Out of the four opioid-naïve patients who started opioid medication after SCS, two had a meaningful reduction owing to a decreased NRS score of three points and two had no NRS changes.

Improvement in QoL is another main aim in CRPS treatment. QoL may be assessed by the 36-Item Short Form Health Survey (SF-36) questionnaire that patients were asked to complete before surgery and again before each follow-up. However, only a minority actually completed the survey, forcing us to dismiss this important part of the follow-up study. A study by Fincham [15] on questionnaire responses indicates that a mere 25-30% response rate might be expected without follow-up reinforcement. As a direct result of the present study, the practice of gathering questionnaires has been changed in our setting. Patients called into follow-up at our outpatient clinic will henceforth have a timeslot before their physical examination to complete the questionnaire, and the neuromodulation nurse will revise the questionnaire with the patients. Furthermore, a stricter follow-up would be preferred but is difficult to achieve in the everyday clinic.

This study did not comprise improvement in functionality, which is one of the four aims of CRPS treatment. This could be done by use of the Pain Disability Index (PDI), but the PDI is not part of the follow-up at our clinic.

Interestingly, even though only 50% of the included patients had a clinically significant pain relief from SCS, all 16 patients (100%) enrolled would choose SCS again and recommend it to others. This may hypothetically be owed to an effect on functionality and QoL, albeit these parameters were unavailable to us. A high approval rating was also demonstrated for the patients with CRPS who were enrolled in the five-year follow-up by Kemler et al. [16].

CRPS-2 is a rare but devastating condition. An epidemiological study on CRPS reported that 49.3% of patients with CRPS considered suicide and that the actual suicide attempt rate was 15.1% [17]. The high approval rate may thus reflect that for these patients, for whom all other treatments have failed, SCS treatment represents a final option offering them hope of clinical improvement. However, use of SCS is costly and involves a relatively high risk of multiple revision procedures, as shown in our study where 44% underwent additional surgery. Thus, further investigation to improve patient selection criteria and total SCS treatment cost per quality-adjusted life year (QALY) will be required to propagate this treatment further.

SCS may offer clinically relevant pain reduction in CRPS-2. However, in our cohort, only half of the patients experienced a clinically significant response, and the costs and complications associated with SCS were considerable. Thus, further knowledge on patient selection, cost-benefit and the SCS treatment mechanisms is warranted.

Correspondence Mikkel Kunwald. E-mail: m.kunwald@rn.dkAccepted 11 May 2022Conflicts of interest Potential conflicts of interest have been declared. Disclosure forms provided by the authors are available with the article at ugeskriftet.dk/dmjCite this as Dan Med J 2022;69(7):A06210521