FMT treatment of recurrent C. difficile infection is delivered through upper or lower endoscopy, enemas or capsules. The highest cure rates have been reported when using repeat FMT delivered through lower endoscopy (88%-100%), whereas the efficacy of a single treatment regimen with FMT capsules treatment is 82%-88% [5, 6]. The exact mechanisms behind the successful effect of FMT in the treatment of recurrent C. difficile infection are not fully understood. The transfer of beneficial bacteria, virus and metabolites from the donor to the recipient is believed to cause the beneficial effects [7].

The incomplete understanding of the mechanisms of action and the transfer of a still not fully characterised living microbial community has made safety following FMT treatment a natural concern among clinicians and regulatory institutions [8]. Continuous efforts are being made to improve the understanding of the treatment and increase its safety, while keeping efficacy high [9]. This is done through ongoing improvements in the screening of donors and transferred material, but also by maintaining registries assessing the long-term risks of FMT.

When guidelines for screening of donors and faecal material are followed, FMT treatment is generally regarded safe both in the short- and the long term, although rare cases of transfer of multi-drug resistant bacteria have been reported [8, 10, 11].

Based on the hypothesis that multi-donor treatment with FMT capsules increases the chance of transferring beneficial microorganisms, this approach has previously been reported with high cure rates in the treatment of recurrent C. difficile infection by our study group [12]. However, multi-donor FMT treatment potentially increases the risk of transferring harmful microorganisms. Furthermore, as traceability might be impaired when using multi-donor FMT, the current state-of-the-art FMT treatment of recurrent C. difficile infection is to use single donors [13].

The aim of this study was to evaluate the effects of three-day single-donor FMT capsule treatment of recurrent C. difficile infection and to compare the efficacy to previous data on multi-donor treatment provided from the same FMT stool bank.

All patients from the capital region of Denmark presenting with recurrent or refractory C. difficile infection where FMT is considered a treatment option are referred to Copenhagen University Hospital – Hvidovre Hospital (CUHH), Department of Infectious Diseases.

Refractory C. difficile infection was defined as persistent diarrhoea with the passage of ≥ 3 loose or liquid stools daily despite at least five days of ongoing treatment with vancomycin or fidaxomicin.

Besides FMT capsules, FMT delivered through enemas and endoscopy, rectal bacteriotherapy (RBT) and antibiotics are used in the treatment of recurrent, refractory or severe C. difficile infection [14]. The choice of treatment at the CUHH for an episode of C. difficile infection is based on patient preferences, the clinical decision of a physician and the current status of available treatments.

Regardless of previous treatment, all patients receiving FMT capsules from the Aleris-Hamlet FMT Stool Bank were treated with 25 FMT capsules daily on three consecutive days, taken in the morning following 6 h of fasting.

Potential donors were screened vigorously through medical interviews and through blood and faecal samples in accordance with international guidelines [15]. Faecal samples were additionally screened every second week of the donation period (see supplementary material: https://ugeskriftet.dk/files/a09210712_-_supplementary.pdf).

In addition to the international recommendations, a donor with a healthy lifestyle including daily physical activity, a healthy diet, low alcohol intake and no smoking was prioritised. A single male donor meeting all these criteria was used in the production of the FMT capsules.

The donor was equipped with 500 ml bottles of oxygen-reduced sterile saline (0.9% NaCl). Immediately after producing the sample, the donor was instructed to cover the sample with the oxygen-reduced saline and to deliver it to the laboratory within 1 h. Hereafter, the sample was stored at 5 °C and processed in the laboratory no longer than 3 h from the time of delivery. Sample and saline were homogenised, filtered and centrifuged. The supernatant was discarded and the pellet mixed with 99.9% glycerol as a cryoprotectant to a final concentration of 33%. Most of the process was done in an anaerobic environment using argon gas to protect the sample and thereby minimising the time the faecal material was exposed to oxygen in atmospheric concentrations to less than one minute. Finally, the samples were frozen at –20 °C for 24 h, then at –50 °C for 24 h, and finally frozen at –80 °C for storage until use. Once the donor had passed the screening after eight weeks, the material was double encapsulated using Capsugel DR Caps size 0 and 00. Each capsule contained 0.6 ml of material; hereof 0.4 ml faecal material and 0.2 ml glycerol. A daily dosage of 25 capsules provides approximately 10 g of concentrated faecal matter derived from approximately 50 g of faeces. Capsules were stored at –80 °C until use.

Serious adverse events were defined as death, hospitalisation or prolongation of hospitalisation, disability or permanent damage in the six months following treatment with FMT capsules and were assessed through the patients’ health records.

Data extraction was performed independently by two investigators (FC and CKS). In the event of any dispute, the key decision was made by a third investigator (MH).

The present retrospective study was conducted as part of an internal quality assessment and approved by the Hospital Directory Board on 21 January 2021. 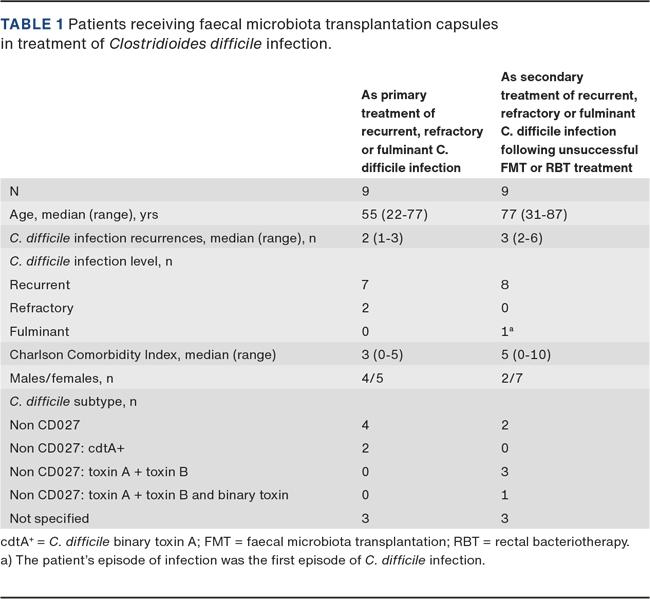 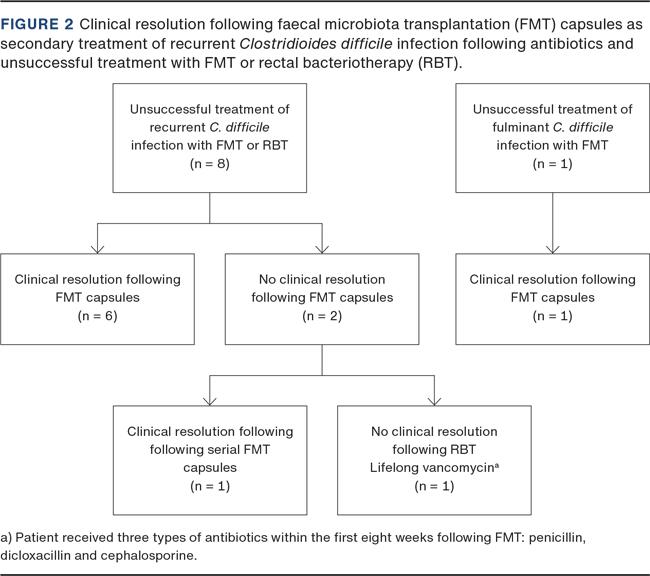 Recurrence of Clostridioides difficile in the follow-up period

Two of the 16 successfully treated patients were diagnosed with recurrence of C. difficile infection in the six months following FMT treatment.

No cases of multi-resistant bacterial infections were recorded in the six months following FMT capsule treatment.

The results from this case series show that a single-donor FMT capsule treatment was effective in the treatment of recurrent, refractory and fulminant C. difficile infection. The cure rate of 83.3% was comparable to previously published results from treatment with multi-donor FMT capsules from our study group. The reported cure rates are in line with those reported in a recently published meta-analysis, including all studies investigating the effects of FMT capsules in recurrent C. difficile infection reporting a primary cure of 85% (95% confidence interval: 82%-88%) across all studies [5].

The strength of this study was that we were able to compare cure rates between treatment with single- and multi-donor FMT capsules from the same FMT stool bank previously used in the same trial site giving us the opportunity to compare cure rates following treatment. Several limitations apply to the study why some of the conclusions should be considered with caution. The small sample size and the non-controlled set-up make it impossible to conclude whether single-donor capsules are truly equally effective to multi-donor capsules. Furthermore, we were unable to present microbiome analysis before and after treatment. The donor in this case series also provided faeces to the multi-donor FMT capsules. Therefore, the single donor might have accounted for the efficacy of the multi-donor capsules.

Our reported short-term safety of the treatment adds to the current understanding that FMT treatment is safe in the short term when screening of donors and faecal samples are performed in accordance with international guidelines [13, 17]. To improve the safety of FMT treatment of recurrent C. difficile infection, we urge researchers to further develop treatment regimens to increase the safety of the treatment, while keeping the efficacy of the treatment high. Two approaches to achieving this may be to determine the lowest effective treatment dose or to only transfer sterile faecal material without the bacterial fraction, called faecal virome transplantation, which has shown promising results [18, 19].

Correspondence Morten Helms. E-mail: Morten.Helms@regionh.dk Accepted 14 December 2021Conflicts of interest Potential conflicts of interest have been declared. Disclosure forms provided by the authors are available with the article at ugeskriftet.dk/dmjReferences can be found with the article at ugeskriftet.dk/dmjCite this as Dan Med J 2022;69(2):A09210712