The eponymous name of Asherman syndrome (AS) is owed to Joseph G. Asherman, who in 1948 and 1950 described the aetiology, frequency and symptoms of intrauterine adhesions (IUAs) [1]. The syndrome consists of the presence of IUAs and symptoms such as amenorrhoea, hypomenorrhoea, dysmenorrhoea, infertility or early pregnancy loss.

Many authors only use the name AS if the IUAs occur after intrauterine surgery following a terminated pregnancy. Other causes of IUAs are hysteroscopy (e.g., resection of endometrium, fibromas or uterine septum) or AS may occur after infections (e.g., genital tuberculosis) [2, 3].

Treatment of AS can be challenging, especially in the more severe cases. The primary treatment goal is to restore the normal shape and size of the uterine cavity to achieve a normal menstrual cycle and in that manner improve fertility and reduce the risk of miscarriage [4].

The aim of this study was to present the outcome after hysteroscopic treatment of AS in one public clinic, using the technique known as fluoroscopically-guided hysteroscopic adhesiolysis (FGHA), focusing on the reproductive outcome.

In this case series, we included all women treated for AS in a public clinic in the area of Copenhagen, Denmark, during a five-year period (from April 2015 to March 2020).

All women were initially seen in our outpatient clinic where basic data were obtained and the AS diagnosis was made based on the clinical presentation and a diagnostic office minihysteroscopy. The grade of adhesions was classified according to a scoring system described by the European Society of Hysteroscopy (1989) [5].

The FGHAs were all performed by a single operator under general anaesthesia in our inpatient operation unit. For the hysteroscopy, we used a 5.5-mm hysteroscope with a 5-Fr working canal, and adhesiolysis was performed with blunt or sharp scissors. Electrosurgery was avoided to minimise tissue damage.

The method was initially described by Wamsteker [6]. The fluoroscopy helps to localise parts of the uterine cavity obscured behind adhesions. Other benefits of this technique are early detection of a false route or perforation, and the assessment of tubal patency during the procedure. The contrast media was infused via the inflow canal of the hysteroscope, and a C-arm system was used for the fluoroscopy.

To prevent reformation of IUAs after the adhesiolysis, 10 ml hyaluronic acid gel (Hyalobarrier) and an intrauterine device (IUD) (NovaT) with the copper removed was inserted in the uterine cavity at the end of the procedure.

Post-operatively, the women received hormonal supplementation with oestradiol and medroxyprogesteronacetat in two cycles, following a schedule described by Hanstede & Emanuel [7].

All patients were discharged from the hospital on the day of the FGHA. A second-look minihysteroscopy with removal of the IUD was conducted seven weeks later. Reformed filmy or minor adhesions were removed during the same procedure. In case of reformed severe adhesions or unsatisfactory primary adhesiolysis, a new operation was planned.

In the present study, all women were contacted and interviewed by phone after their operation. They were asked about their obstetric history and fertility before and after the operation. The questions included number of pregnancies and deliveries, miscarriages and surgical procedures such as dilation and curettage, Caesarean sections and treatments for retained products of conception. We asked about number and type of fertility treatments and bleeding pattern before and after the operation. Additional data, such as subsequent complications, were obtained from the medical records. Informed consent was obtained from all the participating women. The study was approved by The Danish Patient Safety Authority.

A total of 43 women were included in the study, and the median age was 36 years (range: 28-45 years) at the time of the initial procedure. The clinical characteristics are shown in Table 1. Five women stated preoperatively that they did not wish to conceive, but requested the procedure to normalise their menstrual cycle. One of these five women had hypomenorrhoea and four had amenorrhoea. All women with amenorrhoea had restoration of the menstrual cycle after the primary FGHA. 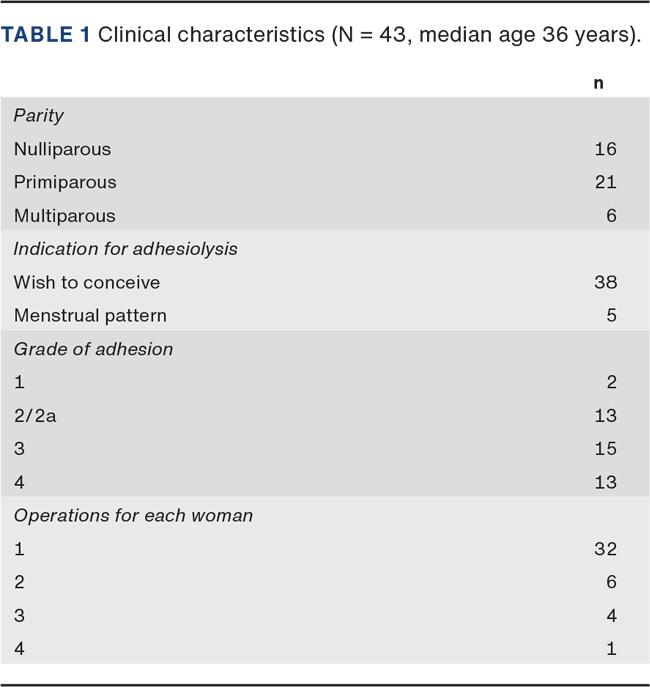 The grade of adhesions was evaluated during the primary adhesiolysis. In all, 32 women underwent FGHA once; 11 women, more than once. In total, 60 FGHAs were performed.

The observation time after the final FGHA varied from six months to 5.5 years, and the median time to pregnancy was three months (range: 1-38 months). Reproductive and obstetric outcomes are shown in Table 2. Among the 38 women who wished to conceive, 31 became pregnant, yielding a pregnancy rate (PR) of 82%. Seven (23%) of the pregnant women had a miscarriage (five in the first trimester, two in the second) resulting in a live birth rate (LBR) of 63% (24 deliveries). 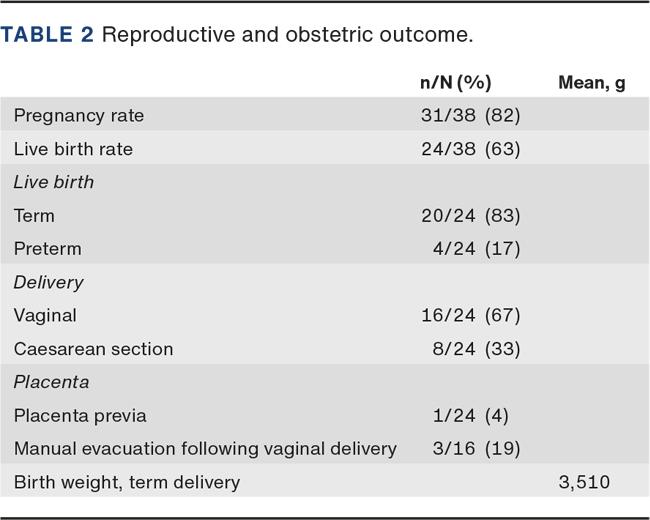 Thirteen women (42%) achieved spontaneous pregnancy, whereas 18 women (58%) became pregnant after insemination (two women) or in vitro fertilisation (16 women). In total, 46 fertility treatments were performed (13 inseminations and 33 in vitro fertilisations). Seven women did not achieve pregnancy despite fertility treatment in six out of the seven women.

Intraoperative complications with uterine perforations occurred in two cases; one with grade-3 adhesions and one with grade-4 adhesions. Both cases were treated conservatively without further complications. One woman had percrete placenta previa in the subsequent pregnancy. She was followed closely during pregnancy and delivered by Caesarean section in week 32+2, where hysterectomy was performed in connection with the procedure.

It is difficult to estimate the prevalence of IUA as they may be asymptomatic. The prevalence of AS varies with the population described [2, 5]. Among women with infertility, the reported prevalence of AS varied from 2% to 22% [4]. Kjer [8] described the clinical features of AS in 61 Danish women based on data collected retrospectively in the course of a ten-year period (2001-2010) via the Danish National Health Registry. In our study, 43 patients were treated during a five-year period, which may indicate either an increasing number of cases in the population or increasing attention to the syndrome.

This retrospective case series comprising 43 women had by its nature inherent limitations. However, it is important to describe the outcome of such procedures as randomised studies are less likely to be conducted. To our knowledge, this is the first study presenting the reproductive and obstetric outcome after FGHA in a Scandinavian population.

The PR (82%) and LBR (63%) in our study seem favourable, though it is difficult to compare with data from other studies due to differences in classification systems, operative techniques, types of secondary prevention, different follow-up procedures and other causes of infertility.

In a recently published systematic review on the reproductive outcomes after various surgical treatments of AS [9], 54 studies (4,640 women) were included. The pooled PR was 50.7% (95% confidence interval: 49.1-52.3%). The included studies were of varying quality, with sample sizes varying from four to 683 subjects and with very heterogenous designs.

Two other studies used the technique with FGHA. Hanstede & Emanuel [7] reported the reproductive outcome after FGHA in 638 women. PR was 75% and LBR was 68%. Vancaillie et al. [10] used a modified FGHA in 423 women over a period of 20 years. The PR was 87%, but 42% of the women were lost to follow-up. Thus, in our study, the PR and LBR seem to be comparable with those of other studies using the same technique.

Pregnancies following surgical treatment of AS seem to be associated with an increased risk of obstetric complications, especially placenta-related complications such as placenta previa and placenta accreta with an abnormally implanted, adherent or invasive placenta [11, 12]. A plausible pathophysiological mechanism is that trauma to the basal layer of the endometrium affecting the stem cell niche may, within a subsequent pregnancy, lead to an abnormal decidual-myometrial interface, which contributes to abnormal placentation [13, 14]. In the systematic review by Guo et al. [9], the pooled prevalence of placenta previa and placenta accreta in women having surgery for AS was 2.8% and 10.1%, respectively. In a general population, Carusi [11] reported the incidence of placenta accreta to be 0.03-0.1%. In our study, one woman (4%) had percrete placenta previa and three women (19%) needed manual evacuation of an adherent placenta after vaginal delivery.

An increased rate of preterm delivery after AS treatment was also described in other studies with frequencies varying from 15% to 30% [9, 15, 16].

In conclusion, FGHA seems to be a safe procedure with a high success rate measured by restoration of the menstrual cycle. The effect on the reproductive outcome remains a challenge due to a possible increase in the risk of placenta-related complications, preterm delivery and Caesarean section. However, the alternative to surgery is impaired fertility. In severe cases, surgery may be difficult and should therefore be performed by surgeons skilled in advanced intrauterine surgery [18]. In future, stem cell therapy may be an option in treatment of severe refractory AS [19]. But most importantly, evacuation of the uterus following miscarriage or delivery should be avoided if possible. If evacuation is necessary, adhesion prevention with hyaluronic acid should be considered [20].

Pregnancies following hysteroscopic adhesiolysis should be classified as high-risk pregnancies, primarily due to a possibly increased risk of impaired placentation.

As randomised controlled trials are not likely to be conducted, a universal classification system and, subsequently, a uniform surgical treatment for AS is urgently needed to ensure the best possible treatment based on observational studies in this field.