Treatment of osteoarthritis with autologous and microfragmented adipose tissue

Osteoarthritis (OA) of the knee is a destructive joint disease causing degeneration of cartilage, damage to the underlying bone and morphological changes to the joint [1]. It is a major public health concern due to the increased life expectancy of the ageing population [2]. No approved medical treatment that reverses the morphological changes currently exists. Conventional treatment includes physiotherapy, pain killers, braces and, in the end-stage, surgical knee replacement [3].

During the past decade, researchers have explored the regenerative potential of mesenchymal stem cells derived from adipose tissue in the treatment of OA [4, 5]. The complex regulatory issues applying for enzymatically treated and/or expanded cells have led to the development of minimally manipulated tissue [6]. Lipogems is one such system where the adipose tissue is mechanically microfragmented and washed until free of pro-inflammatory oil and blood residues. The resulting product is composed of small intact adipose tissue clusters (250-650 microns) containing pericytes retained within an intact stromal vascular niche. Pericytes are cells situated at the external wall of the capillaries, which detach after injury or inflammation from the capillaries and convert into activated regenerative mesenchymal stem cells [7]. The activated pericytes are said to release exosomes filled with regenerative factors that allow for tissue repair and regeneration [7]. The product is safe (obtained the US Food and Drug Agency’s approval in 2014), and in case series it has been demonstrated to be effective in the treatment of various pathologies including knee, ankle, hip and shoulder OA [8], but level-one evidence is lacking. The Lipogems system is being introduced worldwide these years, why it is of utmost importance to investigate the safety, feasibility and efficiency of the product. A small safety study investigating injection with Lipogems in 26 knees was published in November 2018 showing no severe adverse events, but the study did not investigate donor site morbidity [9].

The purpose of the present study was to investigate short-term safety issues and the feasibility of using autologous, microfragmented adipose tissue processed with the Lipogems system for treatment of knee OA.

The study was an independent, non-profit prospective cohort study following the Strengthening the Reporting of Observational Studies in Epidemiology guidelines for reporting of observational studies.

The study was performed at the outpatient clinic of the Orthopaedic Department at Zealand University Hospital, Koege, Denmark, in the period from April 2016 to July 2017 with inclusion and treatment of patients spanning the first three months of the study period.

Patients referred to the department who were suffering from long-lasting knee pain (more than six months) and OA of the knee (Kellgren-Lawrence grade 1-4) were eligible for inclusion if aged 18-70 years, expected to be able to attend rehabilitation and post-examinations, able to speak and understand Danish and able to provide their informed consent. Patients were excluded from the study if they had varus or valgus malalignment of the knee exceeding five degrees, rupture of to the cruciate ligaments of the knee, a BMI above 35 kg/m2 or an American Society of Anesthesiologists score higher than or equal to three. Patients were informed of the study verbally and in writing and, on an informed basis without any pressure, allowed 24 hours of reflection before written consent was obtained.

Harvesting of the adipose tissue

Harvesting of adipose tissue was performed under sterile conditions in the operating theatre. The patient was positioned in the supine position, and an area just below the umbilicus of approximately 8 cm (cranio-caudally) × 20 cm (laterally) was marked on the skin with a surgical marker. Under sterile conditions, the adipose tissue was prepared for harvesting by injection of a suspension of 20 ml carbocain 1%, 200 ml isotonic saline, 0.2 ml adrenaline and 10 mmol bicarbonate using a disposable 17-G blunt cannula connected to a luer-lock 60-ml syringe. The fat was then harvested using a 13-G blunt cannula connected to a Vaclock 20-ml syringe. At the end of the procedure, the skin was closed with a plaster.

Processing of the adipose tissue with the Lipogems device

The harvested fat was immediately processed in the Lipogems processing kit (Lipogems International Spa, Italy), a disposable device that progressively reduces the size of the adipose tissue clusters while eliminating oily substances and blood residues with pro-inflammatory properties [8, 10]. The entire process, carried out in one surgical step, was performed in immersion in a physiological saline solution minimising any traumatic action on cell products. The resulting microfragmented tissue was collected in a 60-ml syringe and positioned for decanting the excessive saline solution. Finally, the product was transferred into ten 1-ml syringes.

Microfragmented adipose tissue was injected under sterile conditions with the patient in the supine position on an examination bench with the affected knee stretched. The superior pole of the patella was palpated, and the femoral condyle was marked with a surgical marker. The suprapatellar recess was located by ultrasound, and a 21-G syringe was introduced in the suprapatellar recess.

Patients were followed-up at three, six and 12 months by a designated project nurse. All data were collected by the nurse through patient-reported questionnaires.

The primary outcome was safety at three months, assessed by recording any adverse event at three months. An adverse event was defined as any event caused by the treatment leading to a less preferable situation for the patient. Patients were screened for donor site morbidity (infection, swelling, pain) and injection site morbidity (infection, swelling, pain). Secondary outcomes were adverse events after six and 12 months and improvements in the clinical outcomes measured by the Knee injury and Osteoarthritis Outcome Score (KOOS) [11]. The KOOS holds 42 items in five separately scored subscales: Pain, Symptoms, Function in daily living, Function in Sport and Recreation, and knee-related Quality of Life. The five patient-relevant subscales of KOOS were scored separately and transformed into a 0-100 scale, with zero representing extreme knee problems and 100 representing no knee problems. A change of ten points or more was considered clinically relevant [11].

Being a pilot study, 20 patients were included based on logistical considerations and the sample sizes of previous pilot studies. No power calculation was made.

Descriptive data were presented as means and standard deviations for continuous data and as number of patients for categorical data. Density plots of data were performed and visually evaluated for normality. Comparison of baseline KOOS scores at three, six and 12 months was performed using repeated measurement ANOVA. The level of significance was set at p < 0.05.

Trial registration: This study was registered in ClinicalTrials.gov (NCT02697682).

Twenty patients were included in the study from April to July 2016, all of whom participated in the one-year follow-up. Baseline data are presented in Table 1. 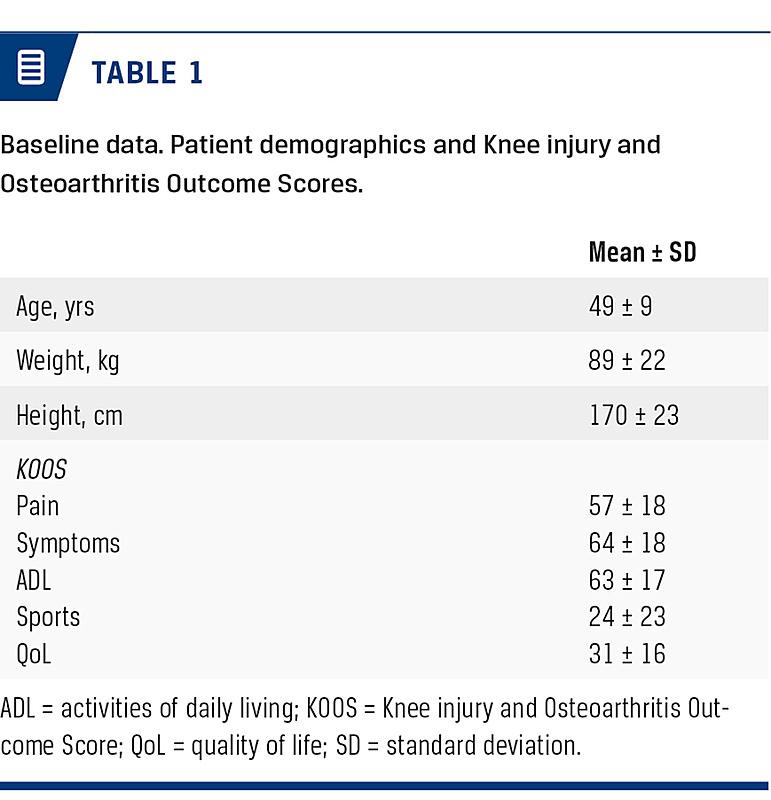 A statistically significant improvement in KOOS was seen in all subscales. At the 12-month follow-up, pain improved 14 points, symptoms seven points, activities of daily living (ADL) 13 points, sports 19 points and quality of life (QoL) 15 points. Ten points or more is considered a clinically relevant improvement [11], and as such, only four of the five subscales (pain, ADL, sports and QoL) showed a clinically important improvement (Figure 1 and Figure 2). At this time, 15 out of 20 patients would go for the procedure again, two would not and three did not know. Two of the patients who did not respond to the treatment have later responded positively to surgical treatment by lengthening of the lateral retinaculum. Both were diagnosed as having patellofemoral pain based on hyper pressure due to a tight lateral retinaculum. 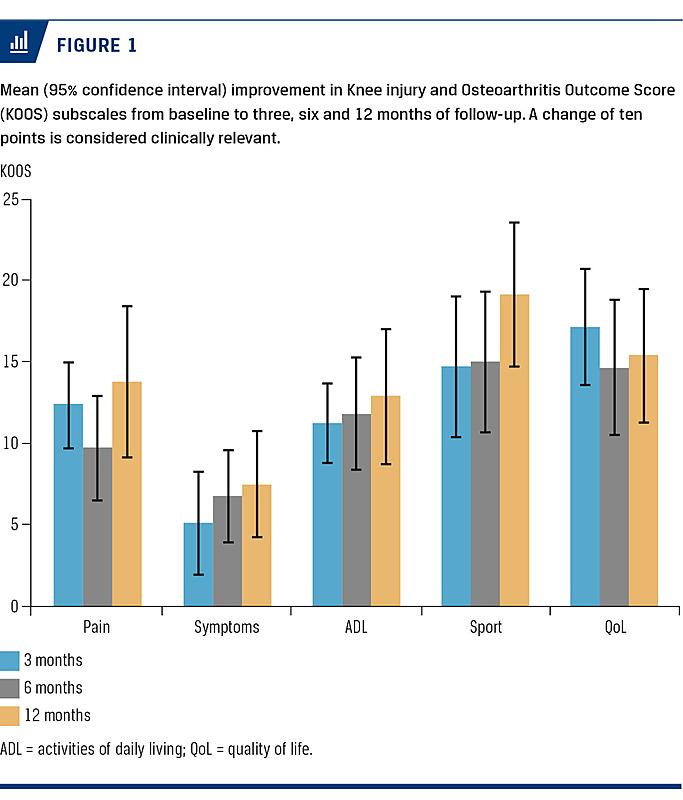 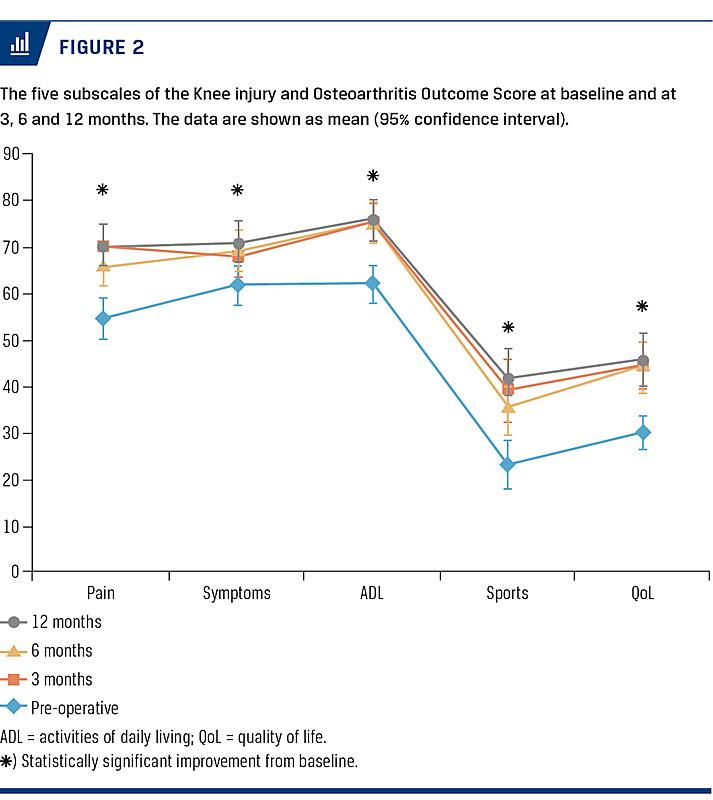 No safety issues were raised in relation to the Lipogems system. One patient complained of cosmetic changes to the abdominal subcutaneous tissue, but this must be considered a minor complication and was probably due to lack of experience with lipoaspiration on the part of the orthopaedic surgeon harvesting the fat. The surgeon was trained and supervised for the first five cases by an experienced consultant plastic surgeon, but still a learning curve effect must be expected. Pain during the procedure was light (visual analogue scale (VAS) 1.8) but increased in the week after the treatment where pain levels rose to VAS 4.4 before declining to VAS 1 after one month and VAS 0.2 after three months. These findings are in line with those reported by Panchal et al [9] and support future investigation of the efficacy of the procedure.

Liposuction is one of the most commonly performed aesthetic procedures and few complications are reported, but the literature is very sparse concerning donor site morbidity in patients with minimal lipoaspiration like the one being performed in the present study. In 2017, Comella and colleagues reported on safety issues after abdominal liposuction and autologous stem cell therapy [12]. They reported 3.4% adverse events including soreness at the site of harvest. No other complications were reported, but no systematic investigation of donor site morbidity was described in the paper. Possibly, complications are underestimated and underreported by caregivers. In larger body-contouring procedures, minor wound complications have been reported in 6% of cases and fatal complications in 19-20 per 100,000 [13, 14]. It seems reasonable to conclude that minimal lipoaspiration like the one performed in the present study is safe but not pain free. Patients should be informed that pain and discomfort will be present at the time of the procedure and one month afterwards, with discomfort peaking one week after the procedure.

No adverse events where found in the treated knees or at the injection sites. This correlates well with the literature where no superficial infections or septic arthritis have been reported after injection with microfragmented adipose tissue [14]. Comparing with other types of knee injection, the risk of septic arthritis is probably very limited, but present. Infection rates after injection with corticosteroids or hyaluronate are not reported in the literature, but case reports exist and, in a Korean study, an increase in septic arthritis rates was attributed to increased use of intra-articular agents [15].

No serious adverse effects like infection or tumour formation have been observed in the treatment of OA with mesenchymal stem cells or minimally manipulated tissue products [16]. More than 17,000 scientific articles have been published reporting on the treatment of more than 320,000 patients [17]. No severe safety issues have been raised [18]. As such, it seems reasonable to conclude that local intra-articular injection of autologous, microfragmented adipose tissue in the knee is a feasible and safe procedure.

The patients experienced a statistically significant and clinically relevant improvement in KOOS on four of the five subscales; however, the effect might be explained by natural variation in the disease or a placebo effect as the study included no control group and no blinding was possible.

One randomised clinical trial (RCT) has been published that studied treatment of OA in the knee with minimally manipulated tissue [19]. It was a prospective, single-blind, placebo-controlled trial including 25 patients with bilateral OA of the knee. The patients were randomised to receive bone marrow aspirated from the iliac crest into one knee and saline placebo into the other. There was a dramatic and statistically significant pain relief in both knees after one and six months, but no difference between the knees indicating that placebo treatment with saline worked just as well as the bone marrow aspirate. Assessing the pain literature more broadly, sham surgical procedures for pain intervention have been shown to yield significant pain improvements. The effect was largest within the first month of sham surgery but remained present at six months [20].

The main limitation of the study was the small sample size rendering it impossible to investigate for safety of rare complications. Another limitation was the method used for implantation of the microfragmented adipose tissue in the supra patellar pouch of the knee. As ultrasonography was not routinely performed, a risk of misplacement of the graft outside the knee joint was present.

Despite these limitations, we can conclude that the treatment of knee OA with intra-articular injection with autologous, microfragmented and minimally manipulated adipose tissue seems safe. High-quality RCTs are needed to elucidate the efficacy of the treatment.

CONFLICTS OF INTEREST: none. Disclosure forms provided by the authors are available with the full text of this article at Ugeskriftet.dk/dmj