The Gold score from 1994 was the first published method classifying people with type 1 diabetes by their answer to a single question (“Do you know when your hypos are commencing?”) as having a normal or an impaired awareness [2]. Patients with impaired awareness have an almost six-fold higher risk of severe hypoglycaemia than the group with normal awareness.

The Clarke method, published in 1995, uses an eight-item questionnaire (including previous experience of severe hypoglycaemia) that classifies patients as having a normal or a reduced awareness [3]. A gray-zone score leaves patients as unclassifiable, accounting for 10-20% in cohort studies. Patients with a reduced awareness have a three-fold higher risk of severe hypoglycaemia than those with a normal awareness.

The third method developed by our group (and referred to as the Pedersen-Bjergaard or the Hillerød method) was published in 2003 [4]. The rationale for developing an additional tool was the general clinical experience that awareness is not an all-or-none phenomenon, i.e., many patients seem to develop partial reduction of awareness, even if this does not result in an increased risk of severe hypoglycaemia as compared to the general population with type 1 diabetes. Our method is based on a single question “Can you feel when your blood sugar is low?” with the possible answers “always”, “usually”, “occasionally” or “never” (and “don’t know”). The method classifies people into three groups: normal awareness (“always”), impaired awareness (“usually”) and unawareness (“occasionally” or “never”). In our original paper, those with impaired awareness prospectively reported a more than five-fold and those with unawareness an almost ten-fold higher rate of severe hypoglycaemia than those in the group with normal awareness [4]. Our method has subsequently been used in many studies on people with type 1 diabetes in various countries and languages [5-8], basically confirming this result; and the Pedersen-Bjergaard method is recommended in the Danish National Guidelines on Treatment of Type 1 Diabetes [9].

During the years, confusion has surrounded the interpretation of our awareness classes [10, 11]. The reasons for this are that our classification operates with three classes in contrast to the others which are bimodal, and that we use of the term “impaired awareness” to describe the intermediate group. Thus, comparisons have, in some instances, been made between our pooled impaired and unawareness groups and the impaired/reduced groups of the Gold/Clarke methods [10]. The relevant comparison, however, is with our unaware class [8]. We have, therefore, updated the Pedersen-Bjergaard classification by renaming our intermediate group to “intermediate” instead of “impaired”.

Here, we present a comparison of our updated classification with the Gold and the Clarke classifications in a type 1 diabetic cohort in terms of prevalence of loss of awareness and rates of severe hypoglycaemia.

A total of 416 outpatients at Nordsjællands Hospital Hillerød, Denmark, were invited to participate in the study. Following written informed consent, 325 adult people with type 1 diabetes for more than one year were recruited. Type 1 diabetes was defined by insulin treatment from the time of diagnosis and a random C-peptide level below 300 pmol/l at a venous blood glucose concentration ≤ 12 mmol/l or a C-peptide level below 600 pmol/l at a venous blood glucose concentration >12 mmol/l. Pregnant women and individuals with significant comorbidities were excluded from participation. Data on history of diabetes, insulin therapy, concomitant medication and late diabetic complications were extracted from the medical records (Table 1). Baseline blood samples were drawn in the non-fasted condition for measurement of C-peptide, HbA1c and routine biochemistry. Patients completed a questionnaire based on previously used and validated questions. Hypoglycaemia awareness was self-estimated using the three methods: Gold, Clarke and Pedersen-Bjergaard scores [2, 3, 4]. The Gold and Clarke methods were applied as described in the original publications [2, 3]. The Pedersen-Bjergaard classification was updated as described in the introduction. The rate of severe hypoglycaemia (defined by need for third party assistance to actively administer carbohydrate or glucagon) was based on one-year recall [12]. The study was approved by the Committee on Biomedical Ethics of the Capital Region of Denmark (H-4-2011-043) and the Danish Data Protection Agency (2012-58-0004). 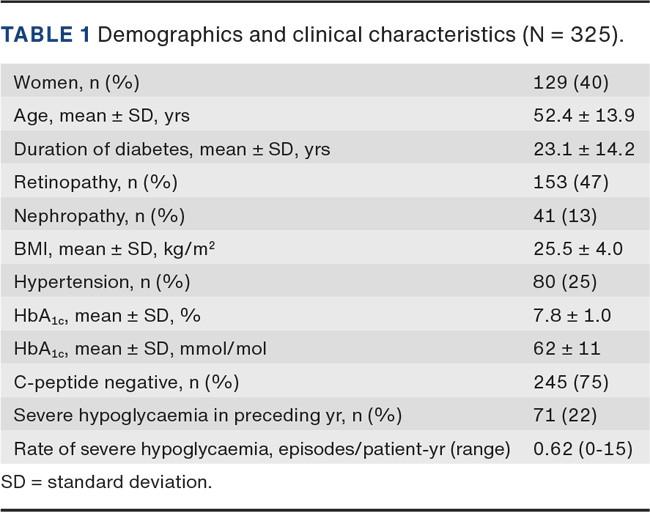 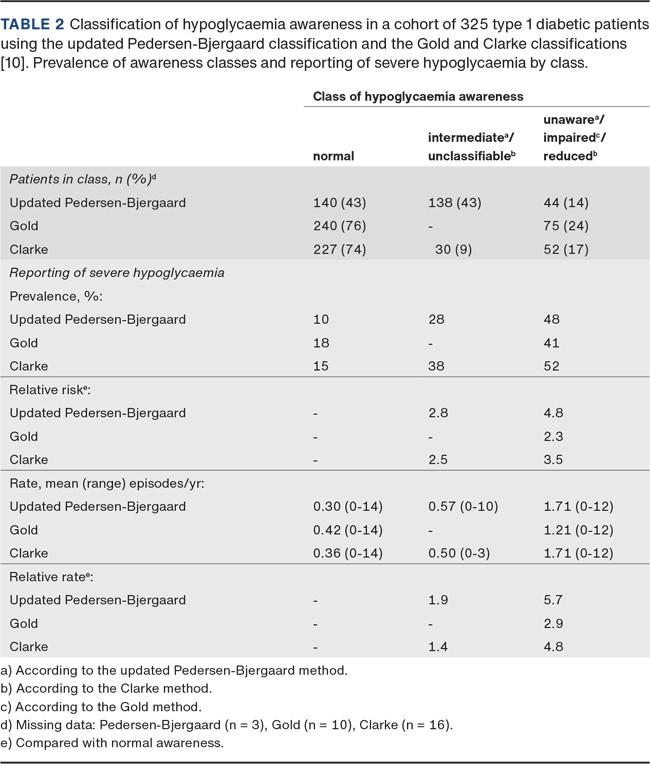 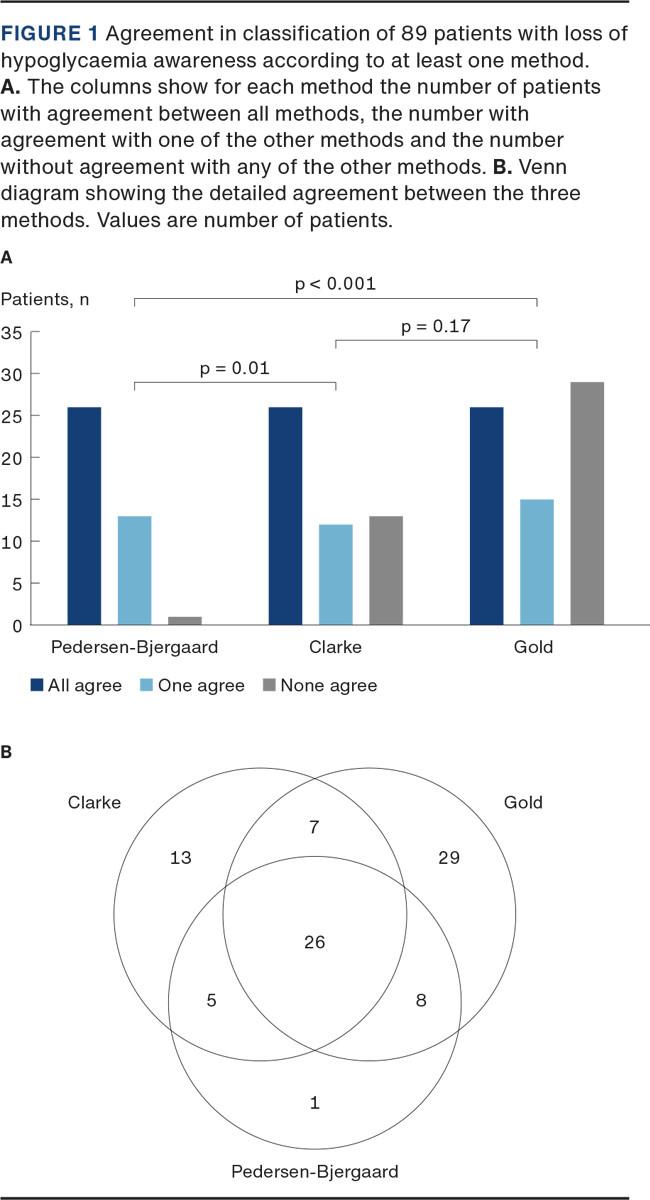 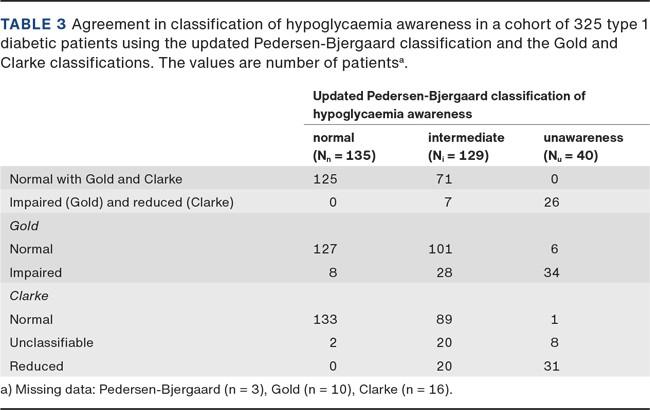 The important difference between the Pedersen-Bjergaard method and the Gold and Clarke method remains the three classes, reflecting that loss of awareness probably develops gradually and may become clinically important already at an earlier disease stage, just like many other diabetic complications, thereby enabling further differentiation in risk of severe hypoglycaemia. Thus, previous studies using our classification in unselected type 1 diabetic cohorts have consistently shown that 40-50% of patients are classified as having a normal awareness with a very low risk (0.1-0.4 episodes of severe hypoglycaemia per patient-year), 40-50% as having an intermediate (previously termed impaired) awareness with an intermediate (but already two- to eight-fold increased) risk and 10-15% as having unawareness with a high (seven- to 21-fold increased) risk of severe hypoglycaemia [5-7, 9]. Furthermore, the rate of severe hypoglycaemia in the intermediate group has consistently fallen close to the mean rate in the cohorts, which was also the case in the present study. The intermediate group in the Pedersen-Bjergaard classification also explains why the risk of hypoglycaemia in the group with normal awareness tended to be lower than in the other classifications.

The three different awareness classes in the Pedersen-Bjergaard classification provide benefit both in daily clinical practice and in research. Clinically, patients at an increased risk of severe hypoglycaemia who are in need of special attention can be identified and offered educational interventions [13, 14] aimed at restoring awareness or provision of artificial awareness in terms of continuous glucose monitoring (CGM) systems with alarm features [15]. Ultimately, hybrid closed-loop systems that can trigger an alarm and automatically reduce insulin infusion when hypoglycaemia is predicted may help these people [16]. Also, patients at a particularly low risk of severe hypoglycaemia who may be candidates for tighter glycaemic control if needed to avoid progression of microvascular complications can be identified. In a research context, studies exploring, e.g., the pathophysiology of loss of awareness may gain considerable additional power using a control group with the opposite phenotype – best possible awareness.

The strengths of this study are the use of validated questionnaires and a high inclusion rate. The major weakness is the lack of an objective gold standard measurement of awareness. Except for the very cumbersome recording of warning symptoms generated during a hypoglycaemic clamp, such a method has still to be developed. Furthermore, the real value of an awareness classification is prediction of future risk of severe hypoglycaemia, which we cannot identify from this retrospective study. However, the general impression from the literature is that retrospective associations with and prospective prediction of severe hypoglycaemia are rather consistent between the methods.

The revised version of the Pedersen-Bjergaard classification for hypoglycaemia awareness and the Gold and Clarke classifications – all based on a self-reported perception of the ability to feel hypoglycaemic warning symptoms – identified people with loss of awareness with reasonably high degree of concordance. The Pedersen-Bjergaard method, in contrast to the others, identified groups with a normal and an intermediate awareness with clinically significantly different risks of severe hypoglycaemia.

Correspondence Ulrik Pedersen-Bjergaard. E-mail: ulrik.pedersen-bjergaard@regionh.dk Accepted 22 June 2022Conflicts of interest Potential conflicts of interest have been declared. Disclosure forms provided by the authors are available with the article at ugeskriftet.dk/dmj.References can be found with the article at ugeskriftet.dk/dmjCite this as Dan Med J 2022;69(9):A01220041