The fishing and the seafood processing industries are the dominating industries in Greenland [1]. Allergic diseases, musculoskeletal disorders and accidental injuries have been the primary occupational health problems in studies of worker’s health in these industries worldwide [2, 3]. Studies have reported an increased risk of becoming sensitised and developing allergic symptoms. The prevalence of work-related asthma has varied between 2% and 36% in various seafood processing industries and the prevalence range of occupational rhinitis has varied from 5% to 24% [3].

Previously, only a single pilot study has been conducted in Greenland in 2008 [4]. Among 20 workers, 40% had a positive skin prick test to snow crab and 20% to shrimp allergens. Almost half of the workers, 45%, had symptoms suggestive of asthma.

The aim of the present study was to describe the prevalence of work-related respiratory symptoms, allergy, musculoskeletal symptoms and occupational accidents among workers in the seafood processing industry in Greenland.

The study was conducted in 2016 at the three largest seafood processing factories in Greenland in Nuuk, Ilulissat and Sisimiut; three smaller factories in nearby settlements; and on three trawlers. The participants were examined at these worksites.

A questionnaire available in both Greenlandic and Danish was used as the basis for a structured interview performed by Greenlandic speaking medical students. The questionnaire contained items on current and previous employment, ethnicity, respiratory, dermal and musculoskeletal symptoms or diseases, and on familial atopy. The respiratory questions were a shortened version of the European Community Respiratory Health Survey questions [5]. We used standardised questions combining pain intensity and restriction in daily activity related to musculoskeletal problems on a ten-point scale, although this has not been validated in a Greenlandic setting [6].

Ergonomic exposure and accident risk were evaluated by work site observations and safety walks conducted by occupational physicians among the authors.

We performed a focused clinical examination of the participants’ upper extremities and the skin of their hands and forearms. A photo of eczematic changes was diagnostically evaluated by a dermatologist. The participants performed lung function measurements by spirometry according to the guidelines of the European Respiratory Society (ERS) [7], using a portable MIR Spirobank II spirometer. Results were compared with prediction values for Caucasians by the GLI 2012 [8]. In case the forced expiratory volume in the 1st sec. (FEV1) or the FEV1/forced vital capacity (FVC) ratio fell below 80% of the predicted value, a post-bronchodilator test was performed 15 min. after inhalation of 0.2 mg salbutamol.

Skin prick tests were performed on the ventral aspect of the forearm with ten standard aeroallergens and three in-house generated extracts from Greenlandic cooked shrimp (Pandalus borealis) and cooked and raw snow crab (Chionoecetes opilio) meat. Reactions were read after 15 min. and considered positive if the largest wheal diameter was ≥ 3 mm with a positive reaction to histamine phosphate (1 mg/ml) and a negative reaction to saline.

Atopy was defined as a positive reaction to at least one standard aeroallergen.

In the interview, we asked about work accidents occurring during the entire employment history and during the past year and month. We included questions on the safety climate and culture form of the Nordic Occupational Safety Climate Questionnaire (NOSACQ 50) [9] and a battery on management safety climate measuring the prioritisation of safety among the local plant managers. The worker’s own safety attitude was measured by questions of convenience violations [10]. Our findings were benchmarked against a large database pool from other industry-based studies in Scandinavia and other European countries [9].

Bioaerosol exposures were evaluated by personal inhalable dust samples and stationary measurements. Personal inhalable dust samples were collected on 37 mm Teflon filters using a GSP sampling head and an AirChek XR5000 pump at flow rates of 2.0 or 3.5 l/min. The samplers were placed in the breathing zone of the employees and an unexposed control filter was included. One half of the material was used for endotoxin analyses; the other for protein extraction.

The exact number of employees at the participating workplaces was unavailable due to workforce fluctuations. We estimate that approximately 80% from the gross list of workers employed were examined. All but one of those present at the days of examination participated, corresponding to 311 workers. 70.4% were males with an equally distributed age range for both genders with a mean age of 40 years. 93.2% considered themselves Inuit. Current smokers constituted 71.7% of the participants with a mean of 13 pack years. On average, the participants had been employed at their present workplace for 5.7 years (Table 1). 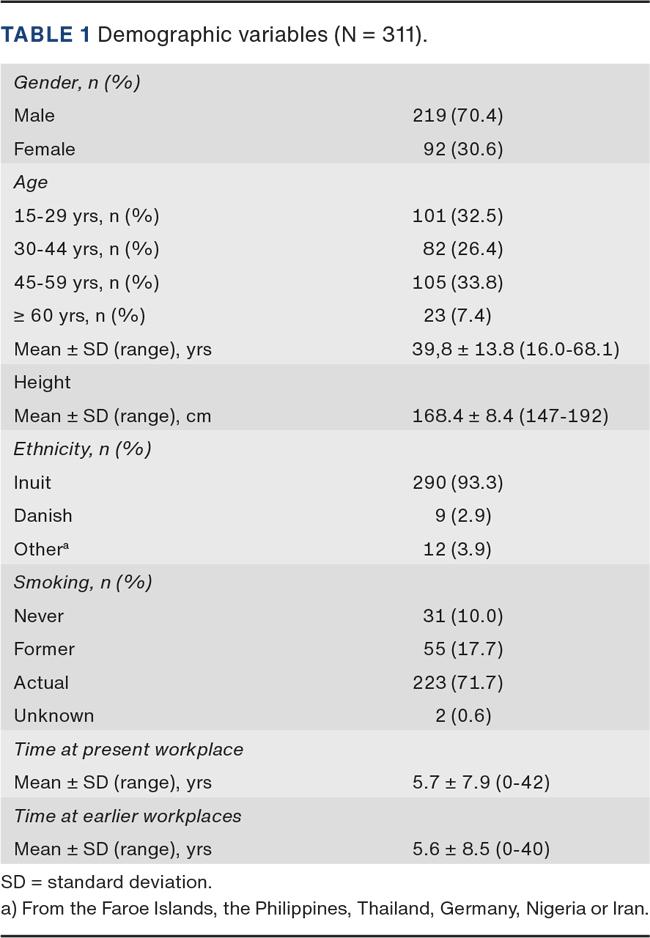 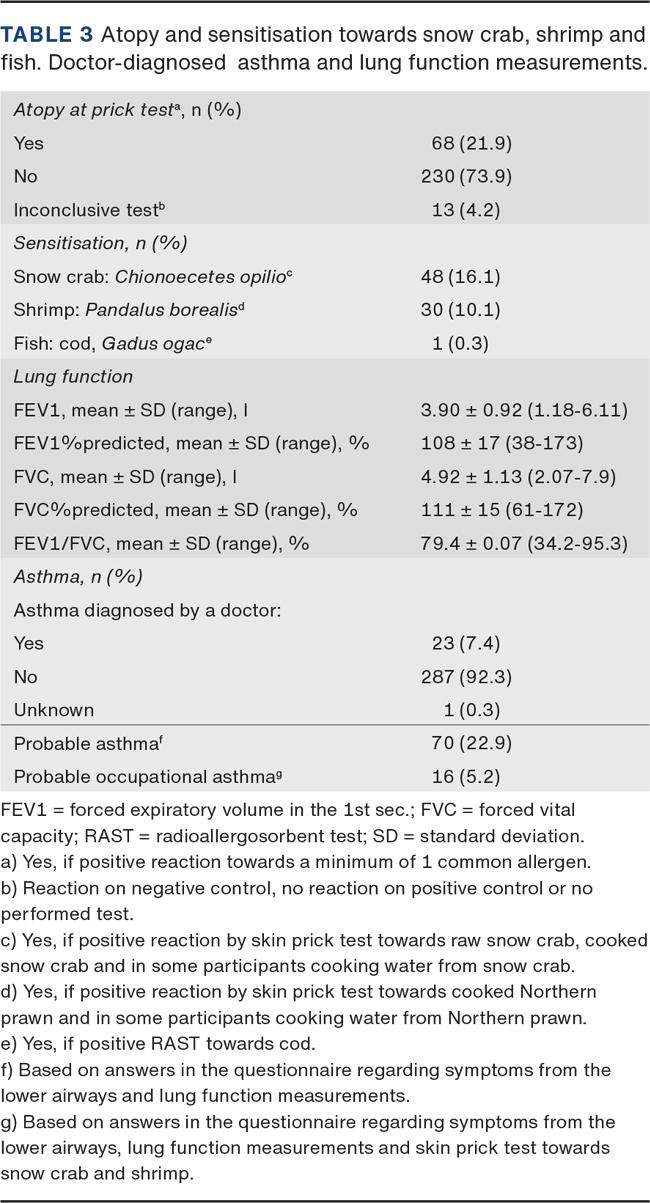 Lung function measurements were higher than expected as illustrated by FEV1%predicted and FVC%predicted, which were both above 100% (Table 3).

According to questionnaire answers, 8% of the participants suffered from chronic bronchitis.

According to lung function measurements and self-reported lower airway symptoms, 22.9% of the participants suffered from asthma. Among all participants, 5.2% were considered to have probable occupational asthma based on a combination of the asthma diagnosis, symptoms from the lower airways at work and sensitisation towards work allergens (Table 3).

The questionnaire-based point prevalence of eczema on hands or arms was 6.8%, whereas the lifetime prevalence was 18.0% for eczema and 19.6% for urticarial skin reactions. Clinically evaluated eczema at the time of the examination was found among 15 workers among whom the dermatologist found contact dermatitis in 13 cases.

Based on the questionnaire, 17-22% had moderate or severe pain in the left or right shoulder or in the neck. By the clinical examination, we found eight workers with carpal tunnel syndrome, six with epicondylitis and four with shoulder tendinitis.

Eighty-seven (28%) of the participants had experienced an accident at their present workplace – the annual incidence rate per 100 workers was 10.3%. Among 43 participants, their accident resulted in sick leave with a mean duration of 34 days (Table 4). 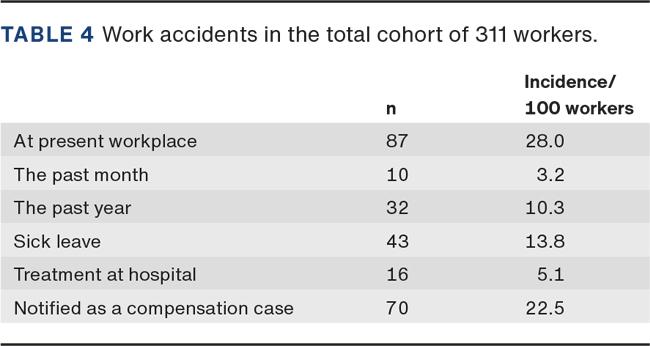 During their work career, 23% had an injury for which sick leave had been reported to the mandatory reporting system at the Work Environment Authority.

The types of injuries and injury outcome were relatively severe. A few examples illustrate this reality: A leak of ammonia - severe burn of the face resulting in two weeks of hospitalisation, squeeze of foot between a truck and a doorway – foot fracture, fall outside on icy ground – fracture of the femur, lifting of fish boxes weighing 80 kg – low-back strain, boiling water into rubber gloves – burn injury, and a 7-m fall from a bridge onto a trawler deck– arm fracture.

Our benchmarking of findings regarding the management safety climate revealed a significantly poorer safety climate among the Greenlandic workers than the benchmark of the manufacturing industry in general. The workers’ own safety attitudes showed that 38.6% reported to disregard safety rules to allow work to be done in an easier way, whereas 20.0% reported to overlook safety rules if they felt these were unimportant.

Work-related diseases and injuries have previously been proven to be more prevalent in the seafood industry than in most other industries [3, 11]. However, the risk of work-related diseases and injuries has never previously been investigated in Greenland despite the large size of the seafood processing industry. The main result of the present study was a high prevalence of respiratory symptoms, allergic airway disease and accidents.

Regarding asthma, 22.9% of the participants were suspected of having asthma, which is higher than the proportion recorded among Inuit living in Nuuk (3.6%) [12]. This asthma prevalence may be inflated, e.g. by inclusion of subjects with chronic obstructive pulmonary disease due to a lack of bronchial challenge tests. Among the participants, 5.2% were classified with probable occupational asthma. This percentage is similar to asthma prevalences of 2%-36% in the seafood industry reported in other studies [3]. In the 2015-2020 period, 39 notified cases of occupational asthma and rhinitis were recorded in Greenland (information from the Labour Market Insurance (LMI), Copenhagen). The high prevalences in this study support that underreporting to the LMI is substantial, causing some workers to miss compensation and risk severe illness.

We found sensitisation levels towards snow crab, shrimp and fish ranging from 0.3% to 16.1%. A study of seafood processors in Canada has observed similar sensitisation levels of 9% to crab and 14% to shrimp [13]. Lung function was better than expected from the Caucasian reference material with both FEV1 and FVC above 100% of the predicted values, confirming that lung function among Inuit is higher than among Caucasians. This has been shown among both Canadian and Greenlandic Inuit [14, 15].

We are unaware of any published levels of particulate matter in the crab or shrimp production. Our measured protein concentrations were high compared with those previously observed in edible crab processing in the UK (0.7-5.2 µg/m3) [16]. Also, in a large study of bony fish and lobster workers that included fishmeal production, total protein levels above 5 µg/m3 were rarely observed [17]. A possible explanation for the higher protein levels in our study is the boiling of shrimp and crab that occurred in all the facilities, combined with inadequate ventilation.

The highest sensitisation levels were found among the snow crab production workers. Hence, snow crab allergens are possibly more potent than other allergens.

Musculoskeletal complaints and diseases were present among fewer workers than expected given the environment which was characterised by monotonous repetitive work and heavy lifting.

The occurrence of self-reported work-related eczema was much lower than the 55.6% one-year prevalence of skin symptoms reported from the seafood-processing industry in Norway [18]. Clinical signs of contact dermatitis were found in numbers comparable to those reported for other sectors with wet work exposure [19].

Compared with other populations, both skin disease and musculoskeletal pain might be experienced quite differently in this population of Greenlandic workers who are used to outdoor activities under physically demanding conditions in cold weather. This might result in underreporting of work-related health problems.

Occupational accidents and injuries were prevalent in the study population. In the medical interview, we enquired about accidents demanding a shorter break from the actual work task and about severe accidents as well. It seems that the degree of severity for the reported incidents was high compared with Danish studies of manual workers [20]. Our observation of a significantly poorer safety climate compared with a national Danish database further supports that the risk of accidents may be higher and taken less seriously than in other industries in Denmark. Also, the workers’ own safety attitudes, as expressed by convenience violations, indicated a fairly poor standard. This is hardly surprising as there is no established tradition for prioritising safety work in the Greenlandic industries; and in this study, we found close to no systematic worker safety practices.

The participation rate was high as virtually all employees present at the work sites participated. All trawlers had two crews alternating every 3-4 weeks and we only investigated one team per trawler. Workers who were absent from their job due to occupational diseases or accidents were not identified. Therefore, some underreporting due to a healthy worker effect may be expected.

The strengths of this study include the broad approach comprising the fishing industry in Greenland and the high participation rate.

Both the work environment measures and findings from the health examination have been presented to senior and factory level management. The results were received in a positive attitude. The researchers presented several practical tools for systematic handling of safety work.

The working environment in the seafood industry in Greenland comprises several exposures related to respiratory symptoms and diseases. The prevalence of asthma was high as was the exposure to airborne allergens. The rate of musculoskeletal diseases was low. The rate of severe workplace injuries was high. We lack knowledge of the more frequently occurring but less severe injuries.

Correspondence Birgitte Hamann Laustsen. E-mail: birgitte.l@rn.dkAccepted 14 December 2021Conflicts of interest Potential conflicts of interest have been declared. Disclosure form provided by the authors are available with the article at ugeskriftet.dk/dmjReferences can be found with the article at ugeskriftet.dk/dmjCite this as Dan Med J 2022;69(2):A05210470