During the initial part of the coronavirus disease 2019 (COVID-19) outbreak, access to healthcare changed. Many functions in Danish society closed down as from 12 March (lock-down) and began to reopen on 15 April 2020. All public employees not performing critical functions were sent home from work on 12 March; and all private employers were urged to have as many employees as possible working from home [1]. The COVID-19 pandemic changed the way we socialised with each other in order to avoid getting and spreading the infection. These changes affected people differently depending on their life situation, use of healthcare services, health condition and perception of risk. As a precaution, the Danish Health Authority considered pregnant women a high-risk group; they were sent an e-mail informing them about preventive measures, including self-isolation. Such measures, along with the overwhelming social focus on COVID-19 in early 2020, might be expected to influence the mental health of pregnant women [2].

The Danish preventive antenatal programme includes three assessments by a general practitioner (GP) and between four and seven appointments with a midwife. The scheduled appointments focus on the woman’s physical health, the child’s growth and the family’s psychosocial well-being [3]. Preventive antenatal programmes aim to secure the pregnant woman’s physical and mental well-being throughout pregnancy. On 15 April, the Danish Health Authority reported a considerable and surprising decline in patient requests for appointments in general practice [4]. The Danish National Health Service regarded the antenatal programme as a high priority, and it was not put on stand-by during lockdown. Both GPs and hospitals, however, had to adopt new procedures when seeing patients. Depending on culture, staffing configuration, the interior design of premises and their availability, such changes included the use of phone or video, shorter visits, increased physical distance and moving the consultation out of its usual clinical setting.

This paper aimed to describe pregnant women’s general concerns as well as their attitudes and preferences in relation to the preventive consultations with their GP and midwife during the early phases of the lockdown.

The cross-sectional descriptive survey was performed among 332 pregnant women in two Danish regions (Copenhagen and Zealand). Since October 2019, an increasing number of Danish GPs have been recruiting pregnant women consecutively at their first scheduled antenatal appointment to a general practice-based trial coined “Family Well-being in General Practice” (FamilieTrivsel). FamilieTrivsel focuses on quality improvement of preventive mother-child consultations in general practice, and on the mental health of small children and their families [5]. We took the opportunity to invite all participating pregnant women to take part in the present sub-study.

A questionnaire was sent to the women on 8 April 2020 (one reminder was sent after two weeks) and all responses received before 6 May were included in the study. The study questionnaire was developed shortly after the Danish COVID-19 lockdown. Exploratory interviews with four pregnant women informed the questionnaire development. The questionnaire comprised 36 questions about the cancellation of scheduled antenatal appointments, isolation practice, perceived risk of infection, perceived threat from COVID-19, concerns about difficulty in accessing healthcare and factors that could improve care (https://ugeskriftet.dk/files/a06200449_-_supplementary.pdf)

A secure electronic mail system (e-Boks) was used to inform participants about the survey, and questionnaires were answered and returned into a secured database [6]. Analyses were performed, and frequencies are given as percentages with 95% confidence intervals.

Women included in the FamilieTrivsel cohort gave written consent allowing researchers to access data from their Pregnancy Health Record and to contact them with questionnaires.

The questionnaire was returned by 257 (77%) of the 332 pregnant women. Table 1 shows the socio-demographic characteristics of responders and non-responders. Responders were slightly older, more likely to be living with a partner and to be employed.

Table 2 presents the women’s perception of risk related to COVID-19 infection. Half of the women agreed to the statement that they had a high risk of being infected with COVID-19 during pregnancy and more than a third of the respondents felt that they had a high risk of becoming severely ill if infected. A similar fraction was worried about their babies’ health. When asked what was most concerning about the pandemic, the unborn child’s health was dominant (69%) compared with their own health (18%) and the health of their partner or other children in the family (13%). Seventy-two percent of the women had been sent home from work at lockdown. Asked about preventive measures, 88% replied that they mostly or completely isolated at home, and more than 95% avoided public transportation. 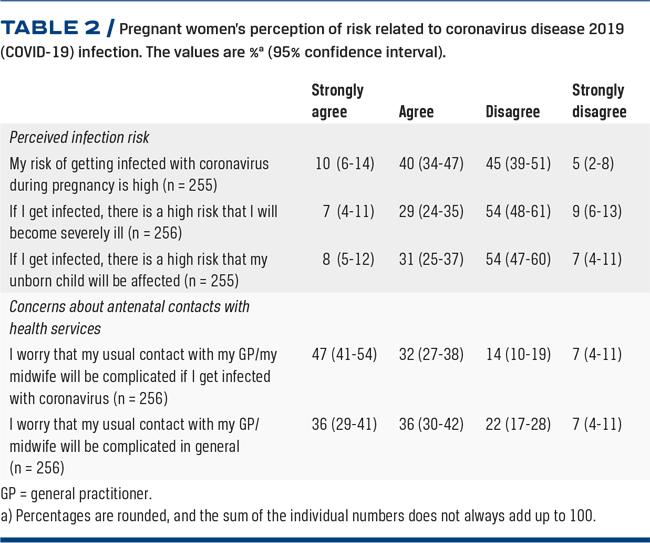 A total of 66% of the respondents had been to a preventive pregnancy consultation in the first month of the lockdown period; 27% only with their GP, 16% only with their midwife and 23% with both. Very few women had canceled consultations with their GP (2%) or midwife (3%). Only 3% had consultations cancelled by the GP, but 15% were cancelled by the midwife. Table 2 (lower section) illustrates that the majority of the pregnant women were concerned about possible disruption to antenatal care, even if they were not infected with the virus. This concern showed no statistically significant association (p > 0.05) with the women’s age or previous births.

Table 3 presents the women’s opinions about possible changes to the pregnancy consultations. Most would not feel more secure if their appointments were delivered by video or telephone, if consultations took place away from their usual setting or if their GP/midwife wore personal protective equipment. Knowing that their GP/midwife was immune to COVID-19 would reassure most respondents. 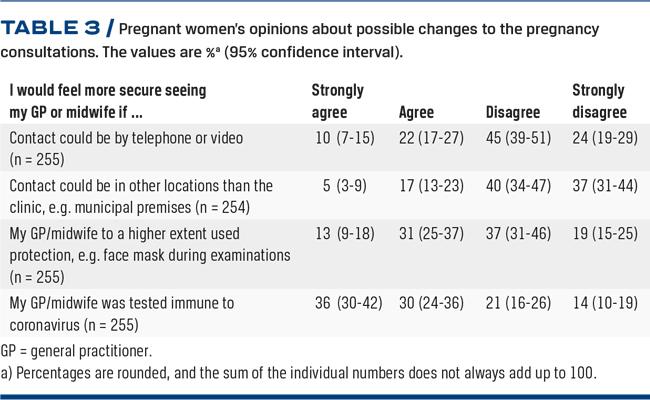 The study showed that the majority of the pregnant women believed that they were at a high risk of infection with COVID-19, and many were concerned about possible health consequences, especially for their unborn child. Almost 90% of the pregnant women isolated at home most of the time. The majority were worried about possible consequences for antenatal care, but very few had actually missed a scheduled preventive consultation with their GP and only 15% with the midwife. The majority of the women preferred normal antenatal consultations in a normal clinical setting.

Our data are cross-sectional, and the population represents women in all stages of pregnancy. Pregnant women were recruited by GPs in Region Zealand and Copenhagen, a part of Denmark in which COVID-19 was relatively prevalent. The study sample comprised the first participants recruited to a larger study of family mental well-being, which began in the autumn of 2019 and which will eventually recruit 1,000 pregnant women. The participating GPs were asked to invite all women attending their first preventive pregnancy consultation, but the completeness of the large cohort sample has not yet been examined. Any selection mechanism is most likely to have favoured well educated and employed women. Within the cohort, we obtained a reasonably representative sample and a good response rate. In the present sub-sample, non-responders were broadly comparable to responders with regard to demographic variables, though fewer non-responders were known to be working or studying at lockdown. It is difficult to know in what way sampling may have influenced the results of our survey. Among those who answered the questionnaire, no differences related to age, previous births or employment were found with regard to concerns about more complicated preventive pregnancy consultations. Less educated and unemployed women may, however, be more vulnerable to changes and have more difficulties in adapting to new consultation formats.

Pregnant women have not been shown to be at increased risk of infection or of becoming severely ill with COVID-19 compared with non-pregnant women, and no increased risk of miscarriage or illness in the child has been demonstrated [7]. However, research on COVID-19 and its impact remains limited, and experience is lacking. On a precautionary basis, the Danish Health Authority therefore included pregnant women in the high-risk group advised to take extra precautions to avoid infection. Slowing viral transmission and protecting susceptible individuals require substantial shifts in behaviour during a pandemic: perceived personal risk appears to be the most efficient motivator for voluntary change [8]. Communication strategies must, however, strike a balance between inducing the necessary changes in daily living without inducing excessive feelings of dread. Our study showed that Danish pregnant women to a very high degree followed national recommendations during the early phases of the COVID-19 pandemic by isolating at home and avoiding public transport.

The perception of risk of infection and its consequences for their own health and the health of the unborn child was, however, also high. Pregnancy is a period with an increased risk of depression and anxiety, and this may be accentuated by the pandemic and the communication by authorities [9]. However, mechanisms that affect concerns in the general population can be difficult to untangle from concerns that are present solely in pregnant women. A timely quarantine strategy may, on the one hand, be effective in slowing down or minimising the spread of virus, but may, on the other hand, increase the prevalence of distress in the population [10]. The overwhelming majority of pregnant women in our study were sent home from work and had the opportunity to protect themselves from virus infection through isolation. Self-isolation may have increased the women’s feeling of self-efficacy, i.e. their ability to control their health and risk. Such a mechanism can only be assessed by qualitative interview studies. Future studies should also address the effects of lockdown on the mental health of pregnant women.

Most of the participating pregnant women had experienced little disruption in their scheduled prenatal visits with the GP or midwife, but many were worried that their contact with the healthcare system during pregnancy would be complicated. An interview study among pregnant women in the US found a prevalent fear of contagion during prenatal visits [11]. Compared with other countries, Denmark adopted a lockdown strategy very early during the pandemic [12]. The consistent message from the government to the public was to “keep the curve flat” by avoiding overcrowded health services. Whereas other countries such as the US [13] faced capacity challenges in intensive care units, Denmark avoided overcrowding. This may be part of the reason why the women in our study were not overly concerned about attending antenatal appointments.

The COVID-19 pandemic has led to a rapid increase in the use of video consultations. This format may have important practical advantages, and, for some groups of patients, video-consultations might be advantageous [14]. The pregnant women in our study had no preference for video consultations. An unchanged antenatal programme seemed to be their main desire. Our study was, however, performed in the early phase of lock-down, and many women may have had little practical experience with the alternative consultation formats. Further research is required to assess the risks, costs, acceptability and potential benefits associated with alternative modes of delivery of antenatal care. Qualitative studies would be important in elucidating how the women value the personal face-to-face contact relative to the risk of infection.

CORRESPONDENCE: Gritt Overbeck. E-mail: grio@sund.ku.dkACCEPTED: 6 October 2020CONFLICTS OF INTEREST: none. Disclosure forms provided by the authors are available with the full text of this article at Ugeskriftet.dk/dmjACKNOWLEDGEMENTS: Sinead Shahrzad, a Danish-English bilingual did the proofreading of the translation of questionnaires into English.