The first known Danish case to become infected by novel coronavirus was recorded on 27 February 2020. Subsequently, the virus spread domestically as travellers returned from the national winter holidays [1]. On 11 March 2020, COVID-19 was declared a pandemic by the World Health Organization (WHO). With only 514 confirmed cases in Denmark, a prompt Danish nation-wide lockdown was established. The containment strategy employed by the Danish Government and the Danish Health Authorities during the lockdown focused on home isolation of COVID-19 cases with mild to moderate disease and without comorbidities, whereas patients with major comorbidities or severe COVID-19 requiring oxygen therapy were admitted to hospitals. As from April 2020, the lockdown was gradually lifted, which included partial reopening of day care, schools and small businesses. As more widespread mitigation is being implemented, a second epidemic wave seems to be emerging.

Although young fit patients may develop severe and critical disease, epidemiological studies have shown a higher mortality among patients with comorbidities such as chronic pulmonary disease (CPD), diabetes, hypertension, coronary heart failure, stroke, cancer and older age. These features were more frequent among patients requiring intensive care (IC) and mechanical ventilation (MV) than among other patients [2, 3]. As such, 88% of New Yorkers had more than one comorbidity with a median Charlson Comorbidity Index (CCI) score of four, whereas the median number of comorbidities in hospitalised Danish patients was two, and 82% of fatal cases in Denmark had two or more comorbidities [1, 3, 4].

To investigate the prognostic impact of age, comorbidities, biochemical markers and severity of disease at the time of admission, we analysed data with complete follow-up on all patients hospitalised with COVID-19 from a single centre during of the first wave of the epidemic.

The study was approved by the Danish Patient Safety Authority (registration no. 31-1521-304) and the Danish Data Protection Agency (record no. 2020-522-0236). According to Danish legislation, informed consent is not required for retrospective studies.

We included adult patients with laboratory-confirmed COVID-19 admitted to Herlev and Gentofte Hospital for at least 24 hours between 2 March and 2 June 2020. During this period, no patients received effective antiviral treatment. We retrospectively retrieved biochemical results and information on comorbidities and vital signs on admission from electronic patient records on Sundhedsplatformen. Last date of follow-up was 9 October 2020, and the median follow-up was 192 days (interquartile range (IQR): 176-200 days).

The primary endpoint was 90-day mortality according to age by decade, CCI score, number of abnormal blood tests and COVID-19 severity estimated using univariable and multivariable Cox regression. Patients were followed from the day of admission to death or 90 days of follow-up, whichever occurred first. We used WHO International Classification of Diseases, tenth version (ICD-10) diagnoses prior to admission to calculate CCI scores, as described elsewhere [5], whereas other comorbidities were defined as detailed in Table S1. Biochemical results on admission were considered abnormal according to local laboratory normal ranges, except for C-reactive protein (CRP); as CRP was expected to be elevated in all infected patients, we used a cut-off of 100 mg/l, which has previously been established as optimal for patients in the intensive care unit (ICU) [6]. Glycosylated haemoglobin (HbA1c) was collected up to three months prior to admission. COVID-19 was considered mild to moderate, severe or critical in patients receiving 0-5, 6-10, and > 10 l/min. of supplemental oxygen, respectively [7], whereas CCI score and number of abnormal blood tests were stratified into tertiles. Variables with more than 10% missing values were excluded. Multivariable Cox regression analysis was performed to mutually adjust for age by decade, comorbidities, number of abnormal blood tests and COVID-19 severity. Statistical analyses were performed in R version 3.6.0. 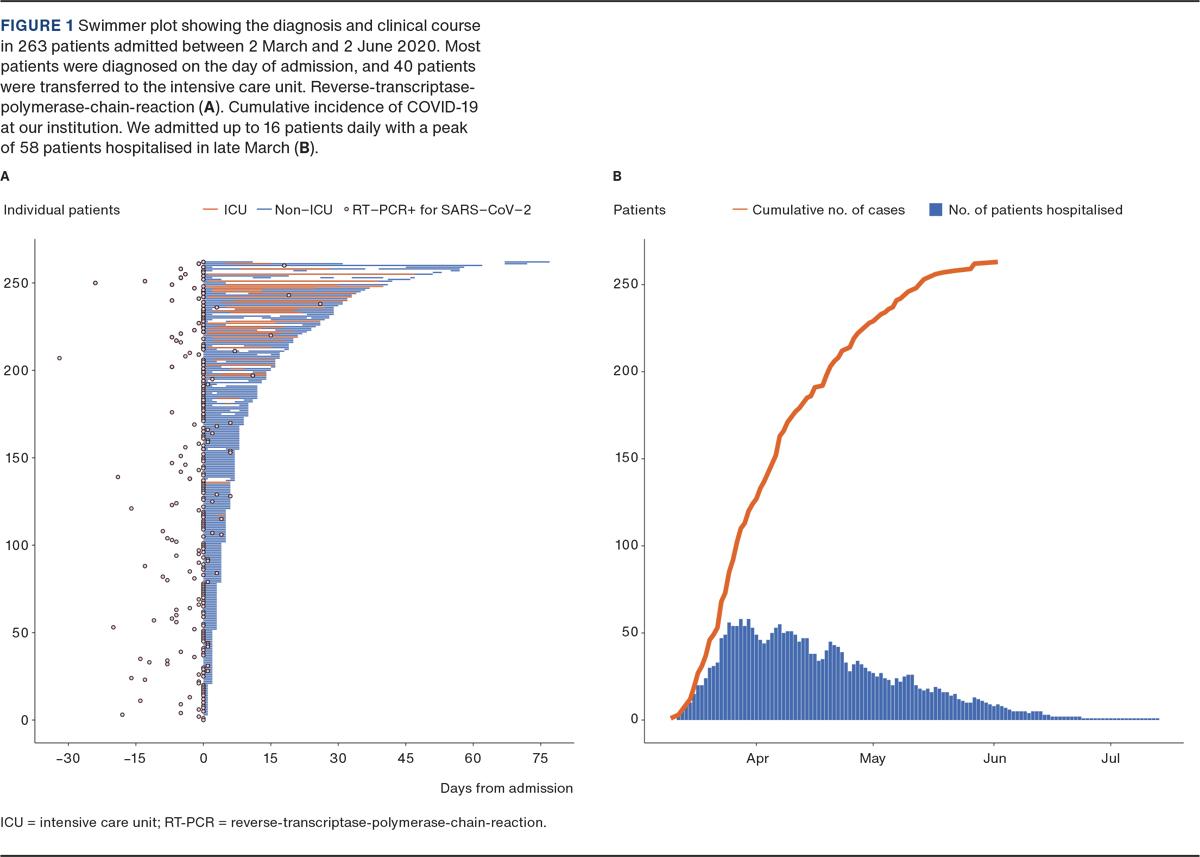 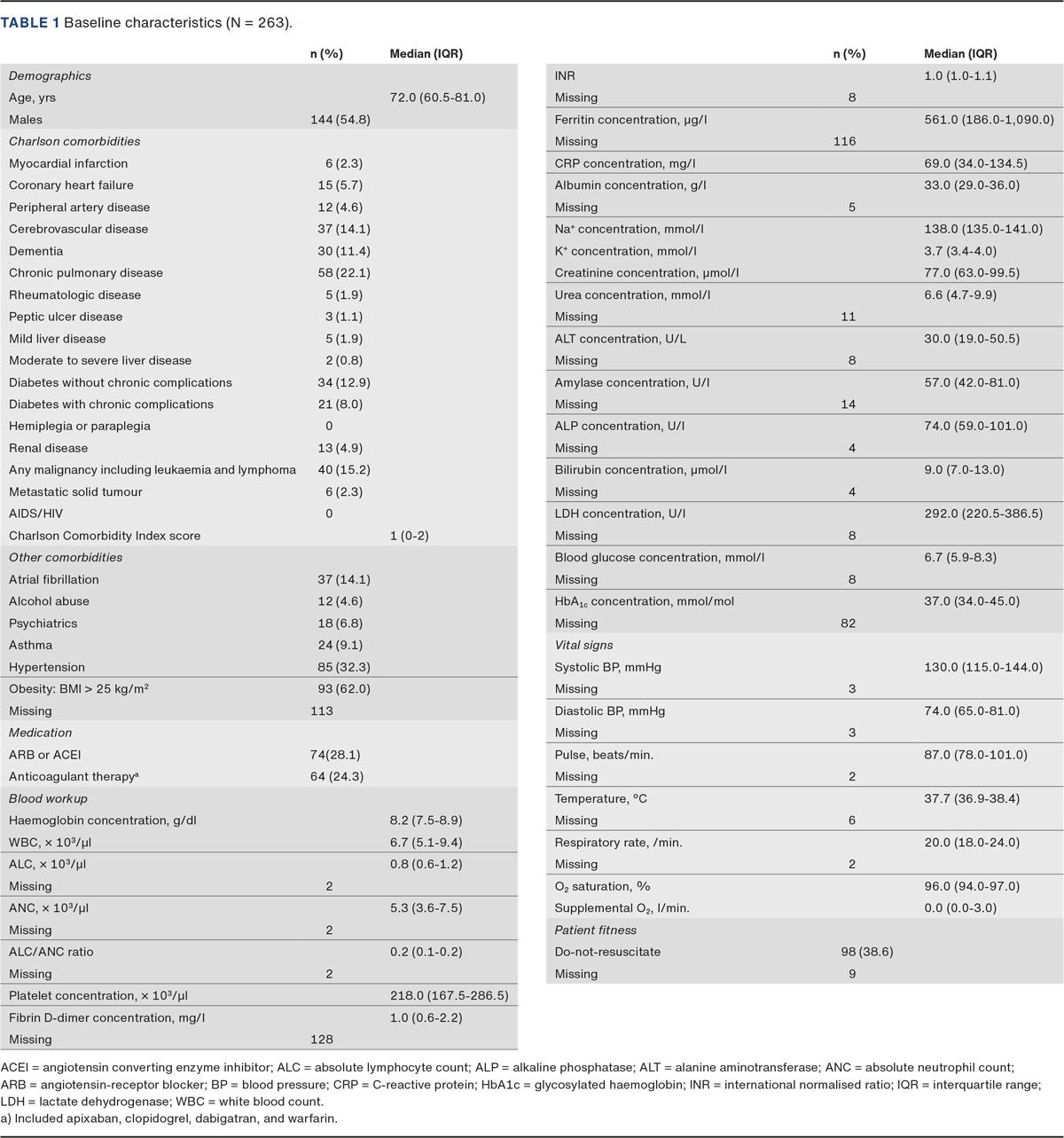 On admission, the patients’ fitness for IC was determined by the treating physician in 254/263 (97%) cases. A do-not-resuscitate (DNR) order was given in 98 patients (39%), whereas no restrictions were ordered in 156 (61%). Fitness for IC was reassessed in 23 patients who were given a DNR order later during their admission. 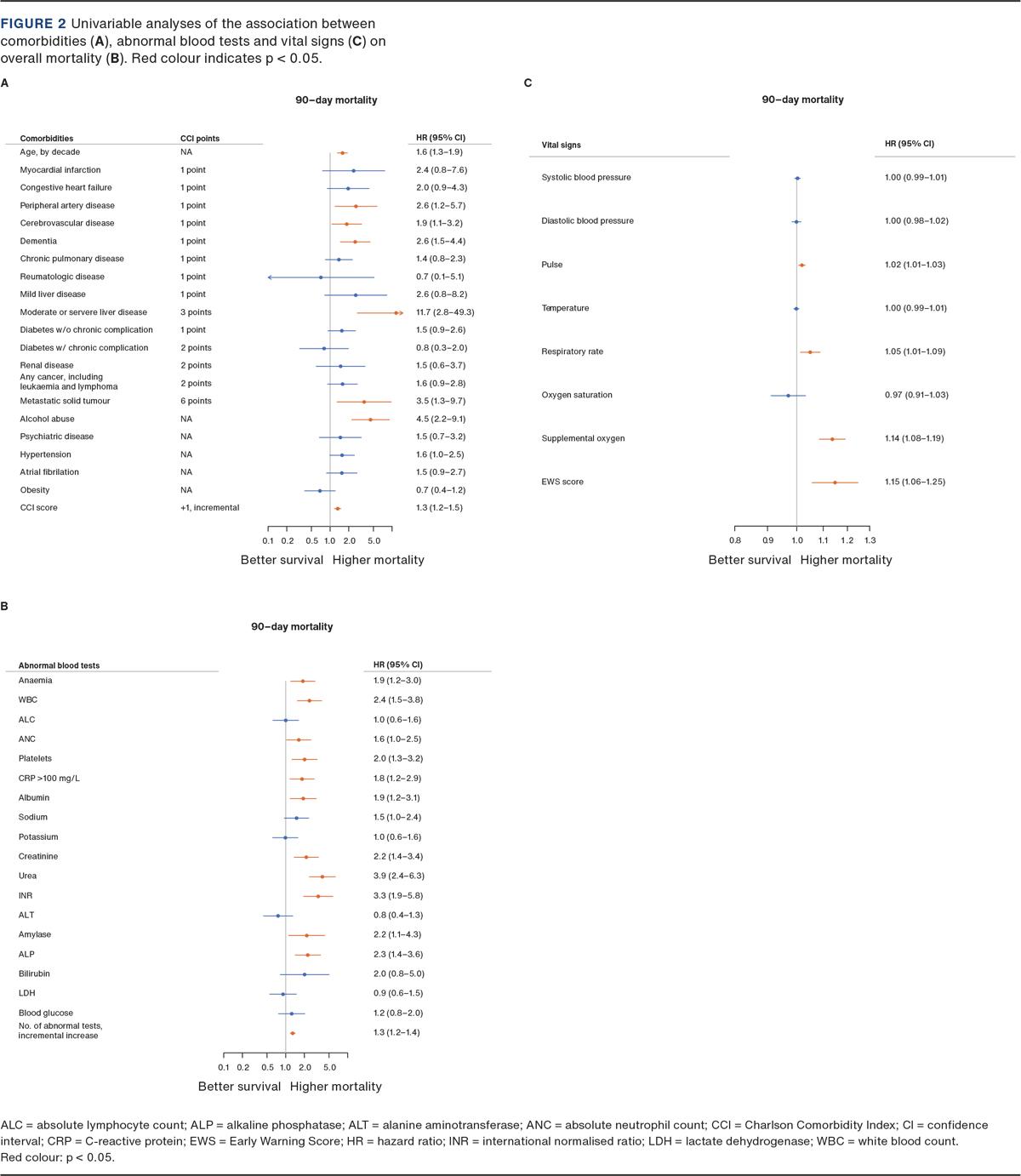 Assessing 90-day mortality, we found that an increasing CCI score was associated with a higher mortality; and patients in the first, second and third CCI score tertile had a 90-day mortality of 15%, 27% and 45%, respectively (Figure 3A). Furthermore, we demonstrated that an increasing number of abnormal blood tests was associated with a gradually higher 90-day mortality of 15%, 20% and 51% for patients in the first, second and third tertile, respectively (Figure 3B). Moreover, an increasing need for supplemental oxygen at the time of admission was associated with a gradually higher mortality; the 90-day mortality was 24%, 64% and 69% for patients requiring ≤ 5 versus 6-10 versus > 10 l/min. of supplemental oxygen, respectively (Figure 3C). Finally, age by decade (hazard ratio (HR) = 1.5; 95% confidence interval (CI): 1.2-1.9), CCI score (HR = 1.2; 95% CI: 1.0-1.4), number of abnormal blood tests (HR = 1.2; 95% CI: 1.1-1.3) and number of l/min. of supplemental oxygen at time of admission (HR = 1.1; 95% CI: 1.1-1.2) were independently associated with an adverse mortality in a mutually adjusted multivariable Cox analysis (Supplementary data). 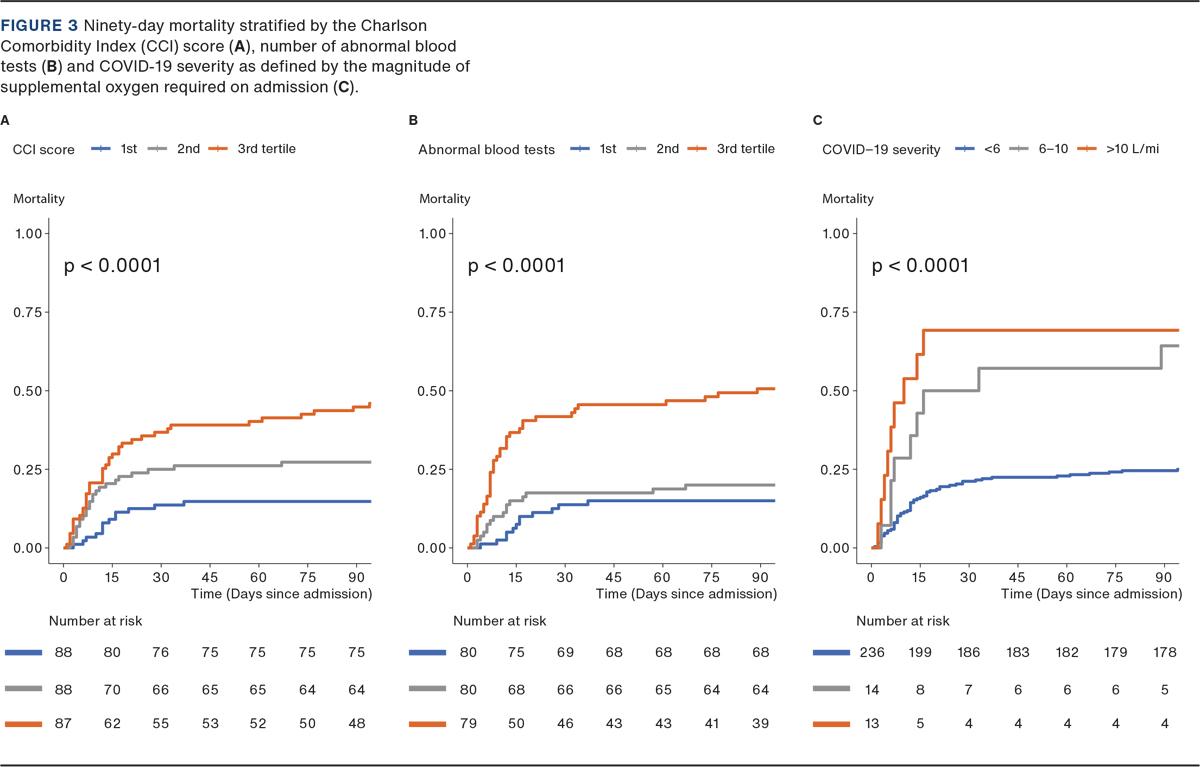 We here describe a cohort of patients with COVID-19 who were hospitalised during the first wave of the coronavirus pandemic at one the hospitals in the Copenhagen University Hospital cooperation with more than six months of follow-up. At the end of the inclusion period (2 June 2020), the cohort comprised 263 patients corresponding to 10.4% of the total number of hospitalised patients with COVID-19 in Denmark [1, 8]. The 90-day overall mortality and ICU mortality were 29% and 35%, respectively. We found that several individual comorbidities and abnormal blood tests as well as age had a negative impact on 90-day mortality. We further demonstrate that age by decade, CCI score, number of abnormal blood tests and supplemental oxygen need were independently associated with adverse 90-day mortality (Figure 3).

With regard to comorbidities, the patients in this cohort resembled those described in the United States and China [1-3], whereas patients were generally less co-morbid compared with Danish nation-wide data [1]. Similarly to other studies, we found that individual comorbidities also had a negative prognostic impact on 90-day mortality [1, 9, 10]. Notably, we found that alcohol abuse and dementia were associated with a higher mortality compared with Danish nation-wide data [1]. We believe that these findings call for further actions as preventive measures among socially marginalised individuals are possible. When including age by decade, the median CCI score was similar to that reported in American data (4 versus 4) [3], and we demonstrated a gradually higher mortality with increasing CCI score in agreement with others [4, 11, 12]. Similarly, Danish nation-wide data have demonstrated a higher mortality for patients with an increasing number of comorbidities [1].

Like others [2, 3, 13-15], we found a high degree of lymphopenia as well as elevated CRP, LDH, ferritin and fibrin D-dimer. However, ferritin, fibrin D-dimer and HbA1c were only available for approximately half of all patients as these tests were not part of the routine blood work-up in the beginning of the pandemic at our institution. Several biochemical markers were associated with a higher mortality. Interestingly, increasing age and elevated urea were strong individual prognosticators and are well-established predictors of outcome for pneumonia included in the CURB-65 score [16]. In agreement with the negative prognostic value of CRP > 100 mg/l in this study, higher cut-off values might have revealed similar associations for other acute-phase reactants [6]. By counting the number of abnormal blood tests, we demonstrated a gradually higher mortality for each additional abnormal blood test. Moreover, our study confirmed an association between COVID-19 severity defined by the demand for supplemental oxygen and higher mortality [7, 17].

Overall, the baseline age by decade, CCI score, number of abnormal blood tests and magnitude of supplemental oxygen were independently associated with adverse mortality. Including a smaller subset of comorbidities and blood tests without concurrence and with a stronger individual prognostic impact in larger studies is likely required to develop a prognostic tool to help refine the prognosis in patients with newly diagnosed COVID-19.

We found a 30-day overall mortality rate similar to rates reported by others (25% versus 21-28%) [1, 3, 13, 14]. After 90 days of follow-up, overall mortality had increased further (29%), and readmissions were common (14%). Although the proportion of patients requiring IC was similar to proportions reported in Chinese, American and Danish data (15% versus 13-15%) [1-3], the ICU mortality in the present study was considerably lower than in most other studies (35% versus 43-78%) [2, 3, 14, 18], but similar to nationwide Danish data (35% versus 37%) [19]. A recent meta-analysis reported a combined ICU mortality of 42% [20]. Deciding on fitness for IC and MV in 97% of patients in the present study, all patients considered fit for and requiring MV were also transferred to the ICU. For patients who remained in the medical ward (non-ICU), only 7% of those considered fit for IC had died at the end of follow-up, whereas 55% of the patients with an initial DNR order had died. This underscores the dismal clinical course of COVID-19 in frail patients who are considered medically unfit for IC. Even though the ICU mortality rate has fallen over time [20], we speculate whether a firm policy to consider a DNR order on admission might have yielded a lower ICU mortality as only the healthiest patients considered to benefit from IC and MV were admitted to the ICU. Since the first day of the Danish epidemic, we stressed the importance of assessing IC fitness in all patients, thereby easing triage and collaboration with the ICU as well as relieving patients of futile weeks in MV. We thus encourage consideration of IC fitness on admission in all patients with COVID-19.

We have described a cohort of the first 263 patients with COVID-19 at a Danish university hospital with an overall mortality similar to that reported by others but an ICU mortality that was lower than most. Consequently, we encourage assessment of IC fitness in all newly diagnosed patients. Furthermore, we found an independent association with higher mortality with each additional increase in age by decade, CCI score, each additional abnormal blood test and each additional litre per minute of supplemental oxygen.